another look at three odd postcards

Editors are teachers; they help you learn. In our world it is the learning that counts, not how a fact becomes knowledge. For example, who taught you 1 + 1 = 2? You don’t know, do you?

It is perfectly okay for you not to remember who taught you the things you know, but it was undoubtedly a man like Charles Hanson Towne, one of America’s most distinguished literary giants.

Although he was born and is buried in Kentucky, Charles Towne was a New Yorker at heart and lived many years in small walk-up apartments, his last being on West 60th Street. He spent his life in the literary world, working as a poet, author, and editor of several magazines; Harper’s Bazaar, The Smart Set, and McClure’s to name only a few.

He also worked hard at being a social celebrity and as such managed a daily column in the old New York American – a celebrated New York morning newspaper that published from 1902 to 1937. In years to follow, through mergers, the paper became the flagship publication of the Hearst family publishing empire.

Charles Towne was born in 1877 in Kentucky. In 1890 the family moved to New York City, where he took his first step toward a literary career as an editor’s assistant at Cosmopolitan. He married his beloved Anne, as in Annie Dear in 1897. (Unfortunately, they enjoyed only seven years of marriage. She died in February 1897.)By 1901 he was at Smart Set, a magazine designed for the sophisticated urban resident. His success earned him an appointment as full editor in 1904, which led to yet another prestigious job at McClure’s. In 1910 Charles and his brother Paul, a lawyer, shared an apartment in New York City at 27 East 35th Street.

Poetry was an important component of magazine content in that era and Towne chose to experiment. He wrote many of the award-winning poems published in his magazine. For the most part his stories were based on his friends, his life, and events in New York City.

One such, Around the Corner, speaks of friendship and its loss, is a personal favorite. 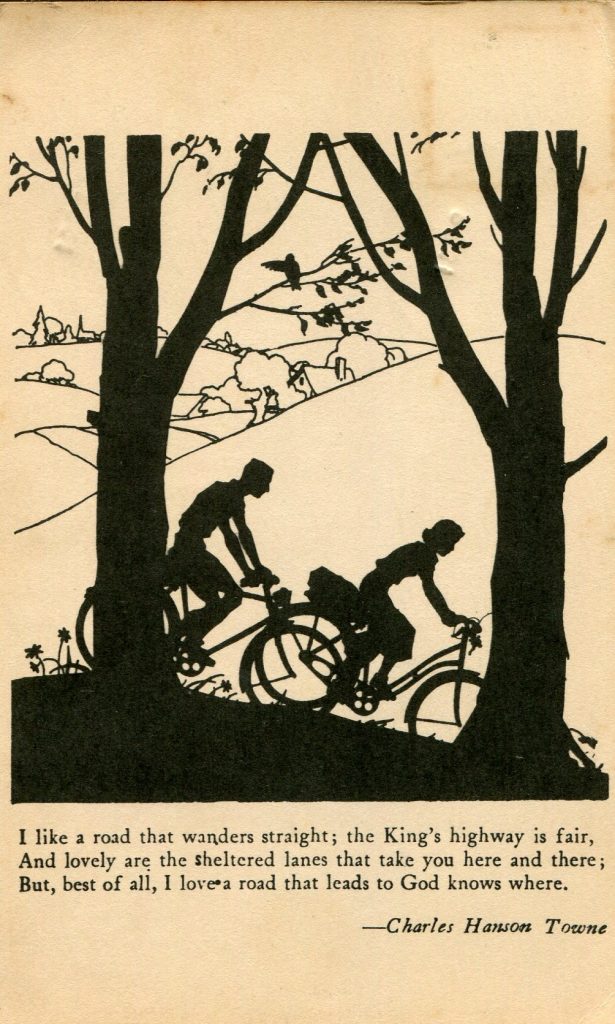 Around the Corner
by Charles Hanson Towne

Around the corner I have a friend,
In this great city that has no end;
Yet the days go by and weeks rush on,
And before I know it, a year is gone,
And I see my old friend’s face,
For life is a swift and terrible race.

He knows I like him just as well
As in the days when I rang his bell.
And he rang mine. We were younger then,
And now we are busy, tired men;
Tired with playing a foolish game,
Tired with trying to make a name.

“Tomorrow,” I say, “I will call on Jim
Just to show that I’m thinking of him.”
But tomorrow comes–and tomorrow goes,
And the distance between us grows and grows.
Around the corner!–yet miles away…
“Here’s a telegram sir, Jim died today.”
And that’s what we get, and deserve in the end.
Around the corner, a vanished friend.

Later in life, Charles Towne wrote a column for the New York American and taught literary classes at Columbia University. He even joined a travelling production cast of the Broadway show, Life with Father. As if it was meant to be, his last efforts in writing recounted his exploits in an autobiography, So Far, So Good. Towne died in 1949.

[Editor’s note: On August 26, 2019, Postcard History presented a history lesson with a card that pictured the home of the Reverend Dr. Samuel F. Smith. The card was more interesting due to the message than because of the Baptist minister who once lived there.

The card was sent to Dr. T. T. Young, the superintendent of the Saco, Maine, public school system. Mailed in December 1918, J. E. Peck apologized for his late arrival in Saco to take up a teaching position. His excuse for being late was “the flu.”

Very little deduction was needed to understand Peck’s message. The Spanish Flu epidemic of 1918 was common knowledge and in August 2019 no one had yet heard of something called Covid-19. Today we read messages from years ago with a very different appreciation.] 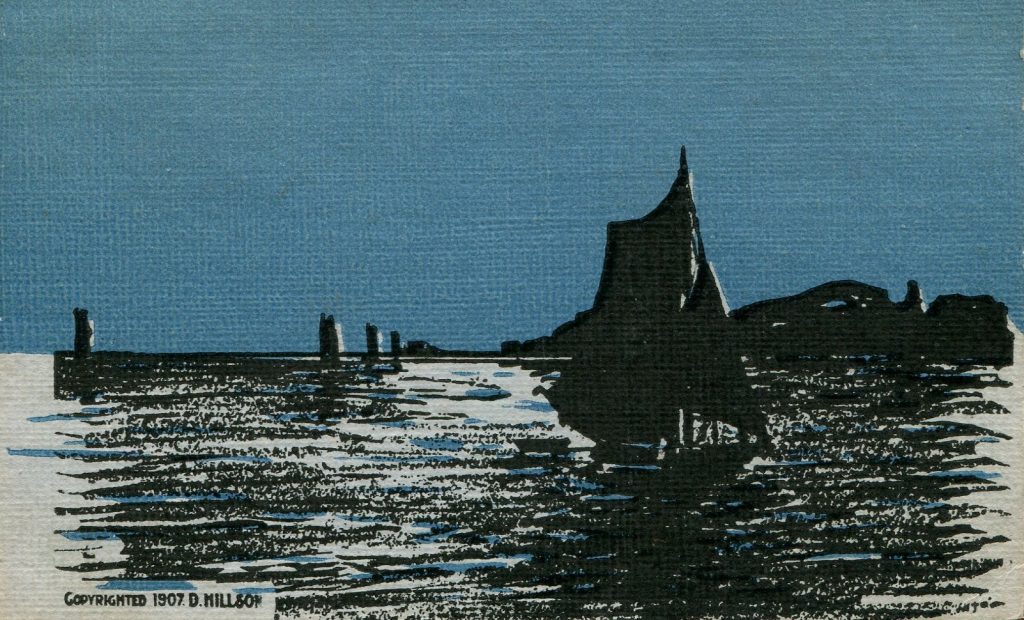 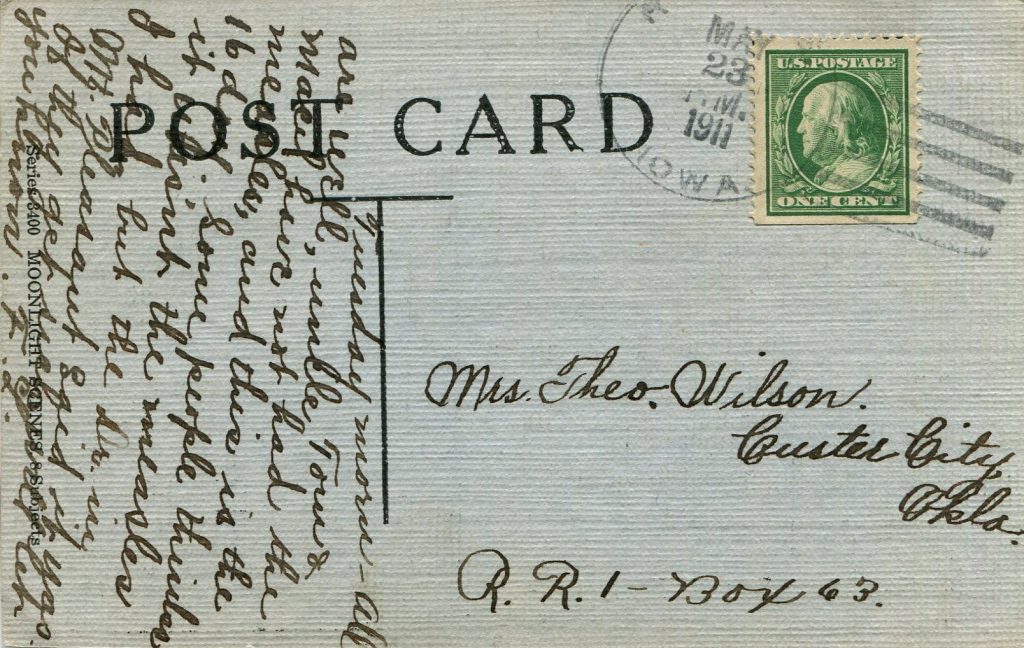 This card is innocuous and the message is benign. However, the topic in 1911 was one that in the life of early 20th century Americans left our citizens wondering if they too would soon join the ranks of millions who were sick with a much misunderstood and deadly virus – the measles.

In 1911 measles was an unidentified illness that infected young children with high fever, cough, runny nose, and watery eyes. A rash appeared in three to five days after the first symptoms and lasted for up to two weeks. It also infected adults and led to serious and life-threatening complications such as pneumonia and encephalitis. A vaccination against the virus was not introduced until 1963. The message on this postcard is testimony to the fear that many had of measles and how it was an underlying concern in everyday life.

Tuesday morn – All
are well, Uncle Tom &
Mabel have not had the
measles, and this is the
16 day. Some people thinks
it wasn’t the measles
I had but the Dr. in
Mt. Pleasant said it was.
If they get sick, will let
you know.
[Signed} F. L.

Thankfully today, measles is a virus we have nearly forgotten.

This 1934 Curt Teich postcard (C.T.-Art Colortone) was issued on linen stock (4A-H140) using a monochrome photograph of the legendary Jim White. The caption reads, Jim White and old bucket at top of shaft that took the first tourists into Carlsbad Caverns. At the bottom edge, it reads, Carlsbad Cavern National Park, New Mexico.

That is all true, but there is much more.

Jim White first came to the public’s attention in 1932 when he self-published a 32-page booklet entitled, Jim White’s Own Story.

He was born in Texas in 1882. Long before he finished school he started working in the cattle industry and much preferred being a cowboy rather than a student. In the mid-1890s Jim’s father moved the family to the town of Eddy, New Mexico – Eddy is now Carlsbad.

In 1898, while riding with a fence-mending crew Jim saw a column of bats rising out of what he called, “… the biggest, blackest hole, I’ve ever seen.”

Days later White returned with a make-shift ladder, a home-made lantern and a pocket full of courage. He discovered what became the Carlsbad Cavern.

The “other” character seen on the postcard is the Guano Bucket. (For the uninitiated, guano is excrement of bats and some seabirds. Its chemical content is wholly nitrogen, phosphate, and potassium, all key nutrients essential for plant growth. As a manure, guano is a valuable fertilizer and to a lesser degree it is used to manufacture gunpowder and explosives.)

White completed early negotiations with several companies, but only one was willing to dig a shaft that would be a direct route to the guano deposits. The bucket was filled, bagged and sold to the owners of California fruit orchards at $90 a ton.

The original guano bucket was used in many ways including a means to convey visitors to a huge cavern known as the Underground Lunchroom. Yes, if you were an early tourist you got to ride in the bucket along with the remnants of bat-droppings and whatever other detritus that may have been blown in from the surrounding desert.

Jim White died on April 26, 1946, in Carlsbad; he was 63. He is remembered as the discoverer, early promoter, and explorer of what is known today as Carlsbad Caverns National Park.

Ray Hahn is a retired educator, but he has never stopped teaching. His decades of researching, writing and editing a newsletter for the South Jersey Postcard Club has been a world-class education in trivia. In addition to postcard collecting, Ray’s other interests include history, genealogy, and touring the world with his wife Marie. Ray often advises his readers to "Join me as we explore the world one postcard at a time." Ray and Marie live in New Jersey.
PrevPreviousHires Root Beer – The First American Carbonated Drink
NextBELGIAN EXPOSITION IS WIPED OUT BY FIRENext
3 Comments
Oldest
Newest Most Voted
Inline Feedbacks
View all comments
Shav La Vigne

Thanks to Postcard History I now know that the 5th Sunday has a meaning to postcard people. Thanks for the great stories. The “Friendship Lost” hit home with me as well as the Jim White story. I didn’t ride the guano bucket but sure was thrilled to see the Caverns in relative comfort.
Thank you!

I was born in 1959 and never had the measles, but several of my classmates did. I came down with the mumps twice, though, and also contracted chicken pox.

Thought I had double dose of chicken pox as a youngster in the 40’s. Can compare sicknesses with you, Bob Kozak