BELGIAN EXPOSITION
IS WIPED OUT BY FIRE

BELGIAN EXPOSITION IS WIPED OUT BY FIRE
Gale Sweeps Flames Over Beautiful World’s Fair White City
Loss May Be $100,000,000.
GREAT CROWD IN A PANIC
Caught In the Kermesse, Many Are Crushed
Only Two Known Dead — Art Works and Jewels Lost

The headline of the New York Times and dozens of other newspapers from Paris to Philadelphia on August 15, 1910, reported on the fire at the Brussels Exposition.

By 1910 Belgium had proven itself as the “world’s exposition” center. The small European, bi-lingual country was hosting its fifth such event in the Solbosch portion of their capital city of Brussels (an area adjacent to an urban park of nearly a half-square mile).

The European participants in the event included Holland, the United Kingdom and Ireland, France, Italy, Spain, and Germany. They sponsored the building of separate exhibition halls; as did Russia and Brazil. A single pavilion for all other nations was erected, in which twenty-plus nations put information centers and displays.

The gates opened on Saturday, April 23rd to an enthusiastic crowd of civilians and government and business representatives. Although over thirteen million admissions were sold, the endeavor lost well over ten-thousand Belgium Francs. (Multiple sources claim the 1910 value of BEF to US$ to range from $43 to $88.)

The mainstream exhibits featured the struggles of the Belgians and the French in the colonization of central Africa and southeast Asia. The arts shown in the French pavilion were popular. The gallery featured masterworks of Monet, Renoir, Matisse, and others as well as sculptures by Rodin. The Belgian Post Office issued two sets of stamps sold to raise money for tuberculosis research.

Just after nine o’clock on the evening of Sunday, August 14th, a fire broke out near the central gallery and quickly spread to the British section, the city of Paris pavilion and a French restaurant. Apart from the animals in the zoo being killed by smoke and heat, nobody was killed. The public had already gone home. This report from the Australian Associated Press is in conflict with the report from the New York Times.

The two sources agree that it took several hours (under- and over-statements of fact are in question here) to control the fire, but they do agree that the rest of the site escaped damage. And they also agree that the fire intensified public curiosity and attendance skyrocketed in the closing weeks of the fair.

The Boston Daily Globe reported on August 15th, It is impossible in the present confusion to estimate the losses in the fire which swept through the exposition last night wiping out whole sections and causing the loss of two lives and 30 injured. Practically everything in the American … section was saved.

Fortunately the most valuable art treasures … including the Gobelin tapestries, a large exhibition of jewelry, paintings, marbles, and furniture were removed by police, fireman and exhibition workers. Another conflicting report.

And yet another contradiction states, The British loss was heavy … including Tutor panelings from the Toronto Museum and priceless furniture, insured for $500,000, from the collection of Bernard Moore.

A second source claims the French dressmaking exhibit, worth millions, was lost; another declared it saved.

One postcard verifies, in a very disturbing scene, the destruction of the zoo creatures by heat and smoke, but the Globe reported that a few of the wild beasts in the menagerie were shot by troops to end their suffering.

Included in the Globe coverage were three photographs (two on the front page and one on page 2) of the fire-damaged buildings before the fire, followed by the announcement that the activities of the fair would be suspended for a few days, but the plan of the executive committee was to reopen to the public when the debris was cleared. Forty private homes were also destroyed by the blaze.

It has been suggested but still unverified that the postcards from the Bruxelles-Exposition. L’Incendie des 14-15 Aoüt 1910 set were published by the upstart firm of J. E. Goossens, that in the 1920s became a world-class lithographer of large format posters.

Below is a selection from the alleged Goossens set. Each card carries a title in both French and Dutch. The cards were likely intended to be sold as individual pieces, but each has an identical Carte Postale divided back.

The exact number of available views is unknown. 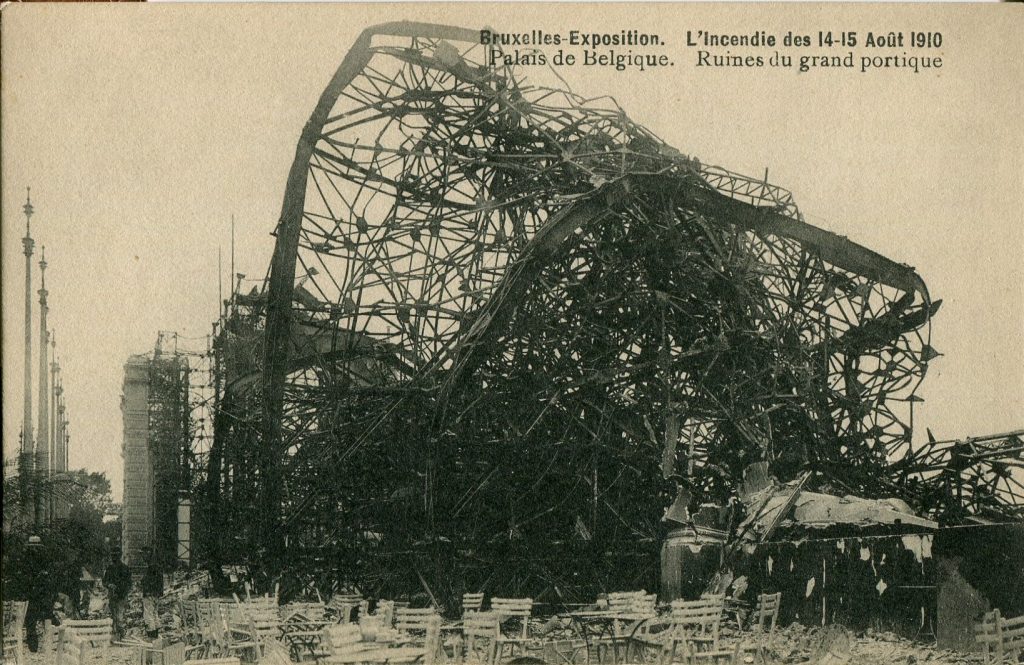 Ruin of the Grand Gate 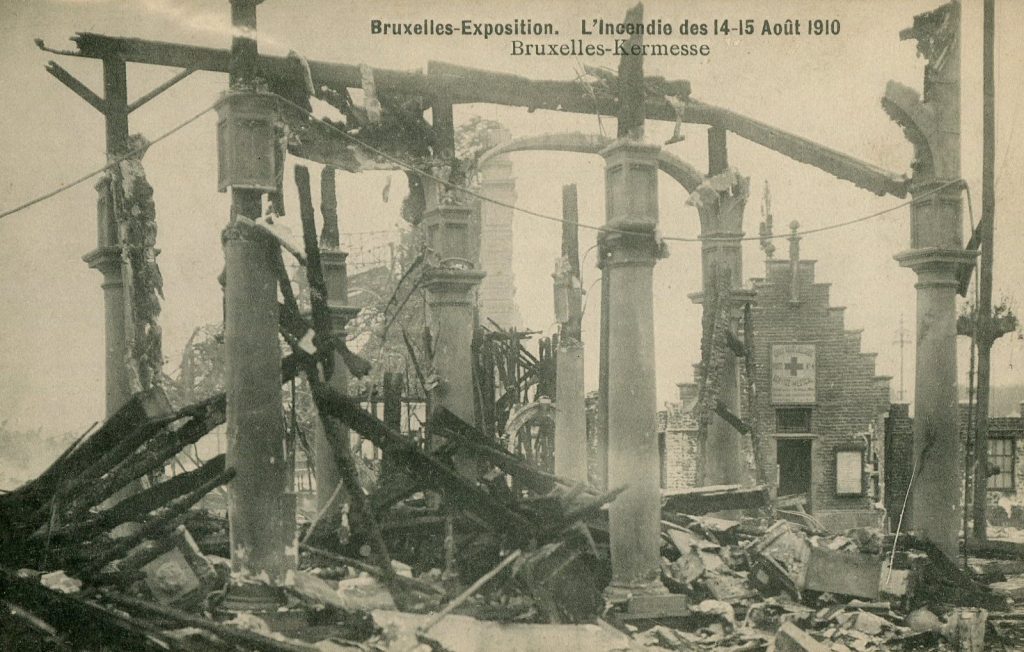 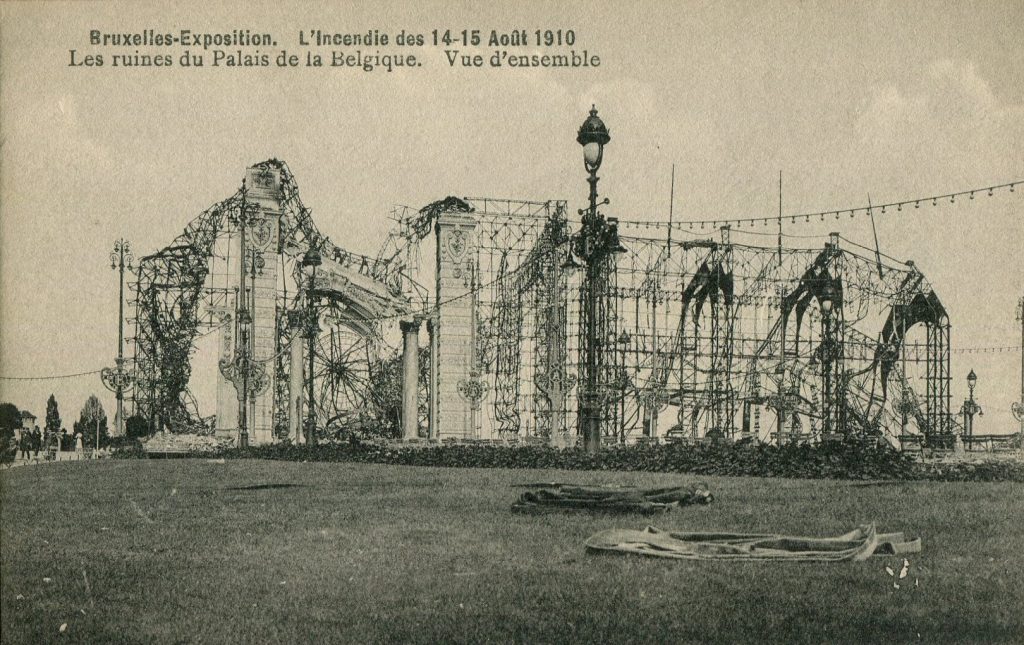 The Palace in Ruin 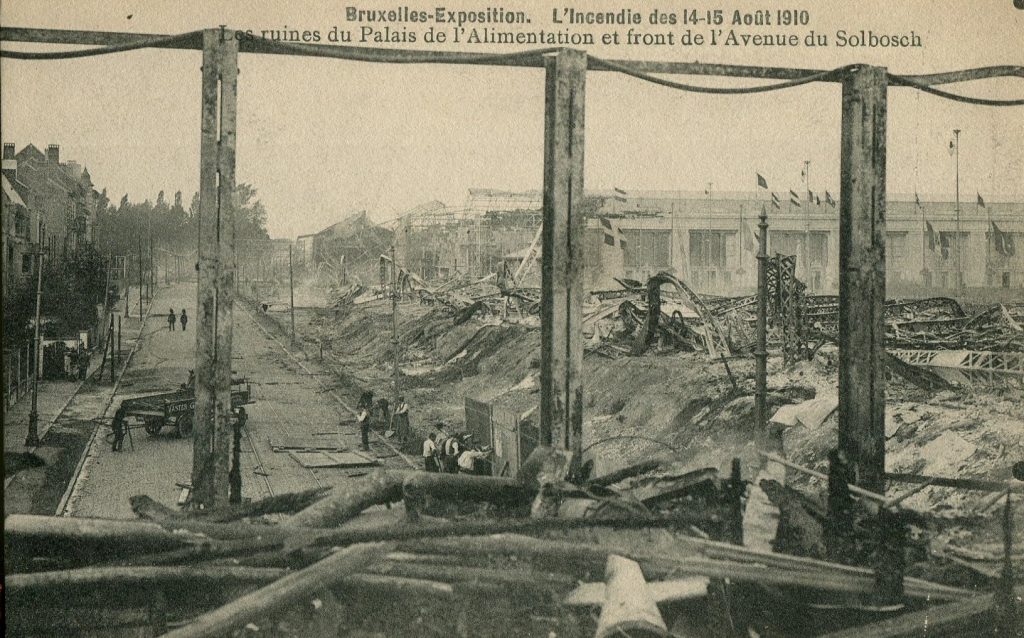 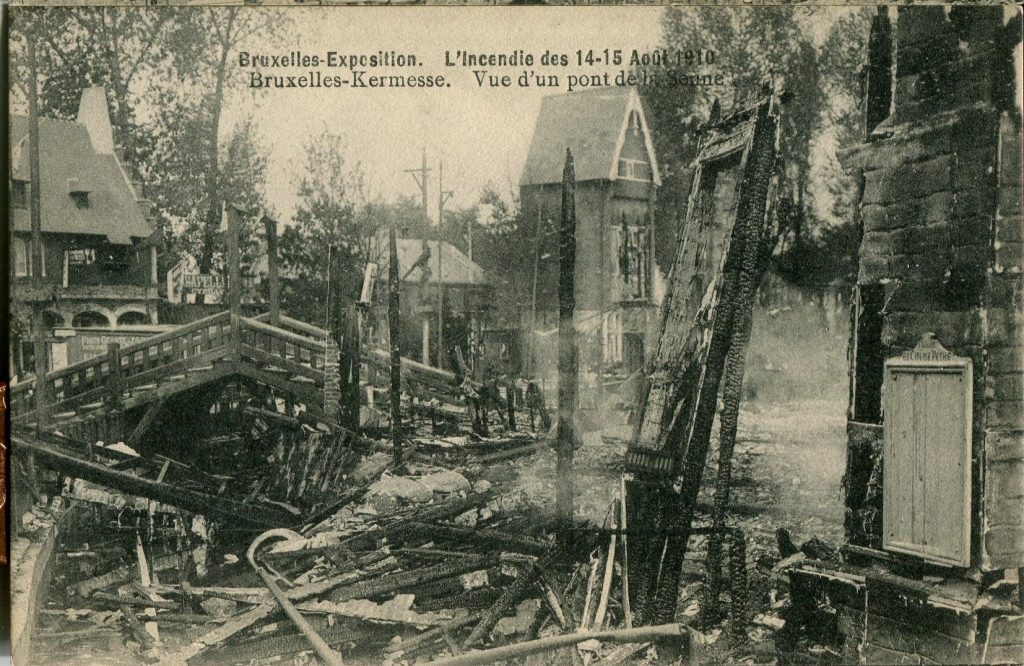 View of the Bridge 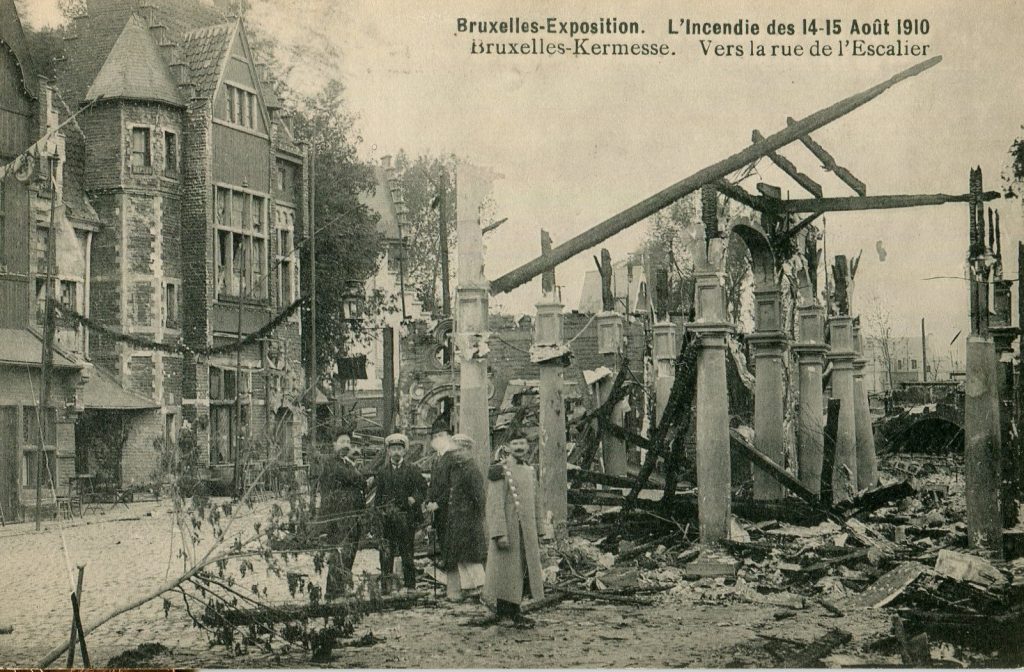 View of the Street 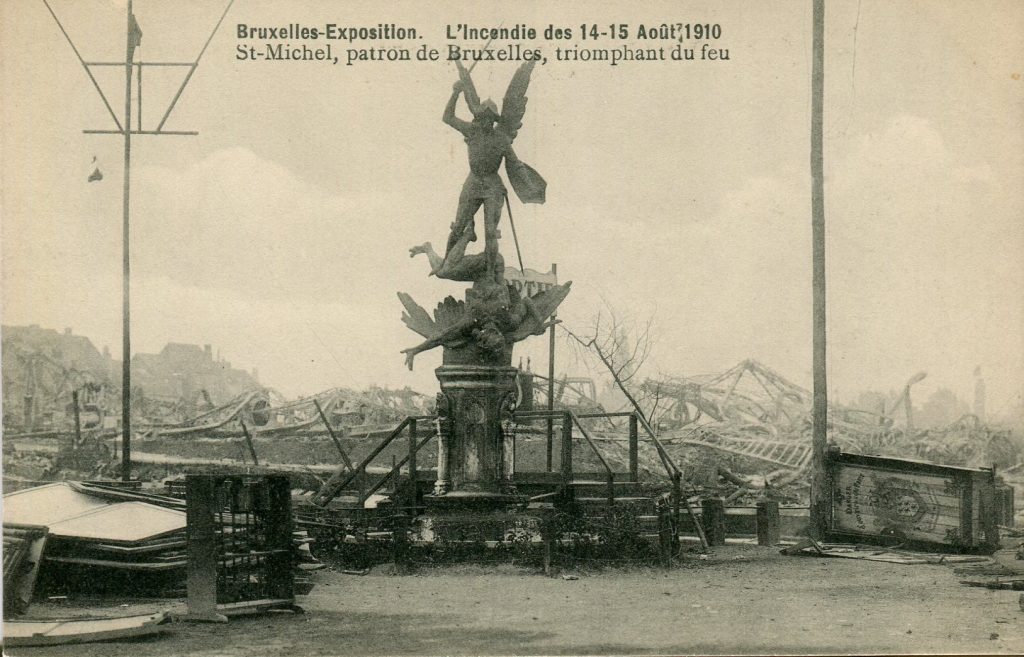 George “Burt” Martin loves to travel to the member countries in the Commonwealth of Nations. He has visited eleven of them. Burt relocated to California after retirement, but he hails from a small market town in the Cotswolds of England where he lived in a house that was built in 1639.
PrevPreviousA Fifth Sunday Special – another look at three odd postcards
NextQuaker OatsNext
2 Comments
Oldest
Newest Most Voted
Inline Feedbacks
View all comments
Bob Kozak

It would be interesting to go back in time to see how politically incorrect the exposition space devoted to the French and Belgian colonization of Africa and Asia would be from a twenty-first-century perspective.

Wonderful set of cards, but what a tragic fire loss ! Good job of historical report.!