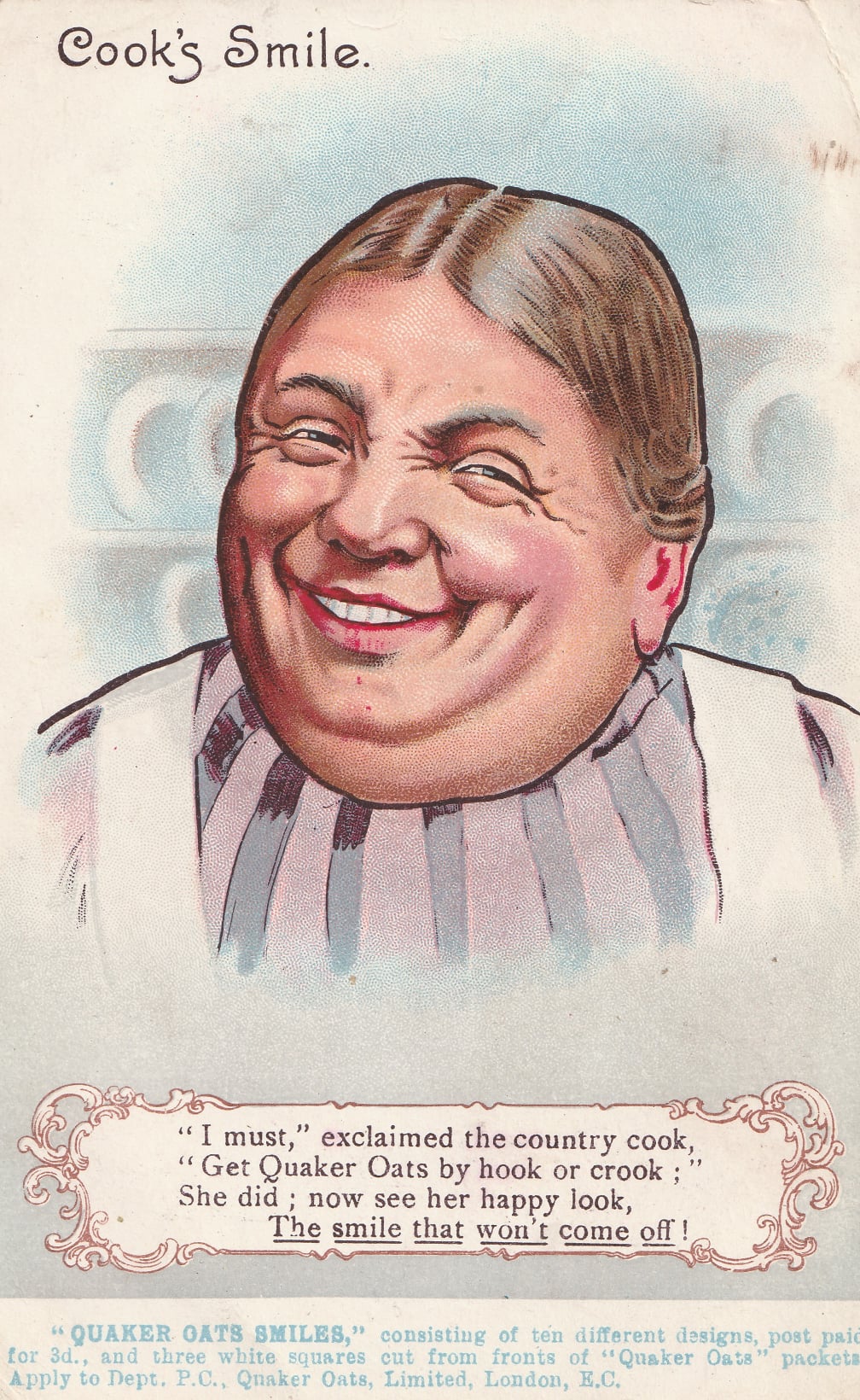 The Cook’s Smile is a postcard made to advertise Quaker Oats. The card is one of a series detailed at the base of the image where it is written “”Quaker Oats Smiles” consist of ten different designs…”

I like advertising cards although my preference is for cards overprinted with the local advertiser’s details or carry information about the service or product on the reverse. I liked  this card for its comical image. I also noticed that the sender referred to the product in the message which is something that appeals to me.

The image most surely is a cook and I suspect that she is in domestic service. At the turn of the century – and for many years before – women who wished to, or for economic necessity had to work, had few types of employment available. While upper- and middle-class women had access, to further education and the professions, the vast majority of working class women had their options restricted to estate positions such as dressmaking, hand loom weaving, laundry, cooking and such. Factory work such as power-loom weaving in the cloth factories or other production jobs, such as cutlery and leather manufacture were available in areas where the workforce was limited.

The cook was an experienced and important member of the downstairs staff. Certainly, the suggestion of household crockery in the background of the image and the mature face of the cook infers that she is someone with years of experience.  I would however suggest that the image has a Mrs. Doubtfire look about it.

In addition to the smiling image there is also an advertising verse,

“I must,” exclaimed the country cook,
“Get Quaker Oats by hook or crook;”
She did; now see her happy look,
The smile that won’t come off!

Just think, someone got paid for that piece of prose!

The Quaker Oats Company, known as Quaker, is an American food conglomerate based in Chicago and while it has been owned by Pepsico since 2001 its roots go back to mill companies formed in the 1850s.

The name was chosen when Quaker Mill partner Henry Seymour found an encyclopedia article on Quakers and decided that the qualities described, integrity, honesty, and purity provided an appropriate identity for the company’s oats product. Quaker Mill Company held the trademark on the Quaker name.

In Ravenna, Ohio, on September 4, 1877, Henry Seymour of the Quaker Mill Company applied for the first trademark for a breakfast cereal, a man in Quaker garb.

The card is postmarked, although it was with a dumb cancel and as such no date of postage is seen. I have seen others from this set postmarked from 1905 or 1906 and these dates fit with my thoughts of vintage.

The card is addressed to Miss Lillie Byass, Manor Farm, Butterwick, Sherburn, York and the sender Becky writes “Don’t forget to keep smiling, even if you have to get some Quaker Oats to do it. Think of the lovely time you had in the ‘ring’ on Monday. Don’t let your smile come off. Becky.

The message reads like a bit of fun between two young friends. I have no real idea what is meant by the ring although the fact that the card is addressed to Manor Farm may suggest that the ring was a show ring, and that Lillie Byass was smiling as she was displaying animals in either a show or auction ring.

The surname Byass is not common and Butterwick is a rural area. That said, I read that there were at least ten farms being worked by the extended Byass family in 1901. Careful record searches lead me to believe Lillie Byass was Lillian Ann Byass who was born in June 1885. I suspect that her father was a tenant farmer and at the time of the 1911 census, Lillie is 25 years of age and living at Butterwick, Sherburn in the home of her parents, William and Sarah Ann Byass. William is aged 75 and a farmer and has been married to 70-year-old Sarah Ann for 48 years.

During this time, they have produced twelve children of which two died before 1911. Lillie is the only one of the children who is at home at the time of the census although she is then Mrs. Lilian Ann Stephenson having been married two years earlier.

She has given birth to two children, and both are living. One of the children, 3-month-old John Byass Stephenson, is with her in Butterwick. There is also one domestic servant and seven males who have various farm jobs.

Joseph died in 1964 with Lillie following in 1970. I suspect that in many ways the couple lived an ordinary life although it would appear to be a life spent from the cradle to the grave working in agriculture.

As to Quaker Oats – well they are still putting smiles on faces to this day.

Bob Teevan is an eclectic collector of vintage postcards. He enjoys digging into the people and places related to his cards and thinks of a postcard as a window into history. He has recently begun a Facebook group, “People and Places behind Vintage Picture Postcards” that has informal and fun discussions in respect of the people and places behind postcards. He is also keen to keep the fun in the collecting hobby. He lives in Scotland.
PrevPreviousBELGIAN EXPOSITION IS WIPED OUT BY FIRE
NextAre You Ready for Some Football?Next
2 Comments
Oldest
Newest Most Voted
Inline Feedbacks
View all comments
Bob Kozak

The Quaker Oats factory in Akron produced cereal until 1970. The plant was then developed into Quaker Square, a shopping and dining complex, which also featured a Hilton hotel repurposed from the silos. The property was purchased by the University of Akron in 2007, and is now used for offices and student housing.

Would have liked to see the reverse of the card. I have a website where I show front and back, even with the new vintage cards that were never postmarked or stamped. Otherwise, I truly enjoyed your story. I like the history lesson on the firms associated with the card. Good job!