Are You Ready for Some Football?

“Are You Ready for Some Football?” asks Hank Williams Junior’s iconic song, All My Rowdy Friends Are Coming Over. Postcard collectors are not a rowdy bunch by nature, but I thought Postcard History’s readers would enjoy a trip across the United States to view several college football stadiums. The postcards date from the 1910s to the ‘50s.

During the 1920s and ‘30s, college football was one of the predominant spectator sports in the United States. Professional football had a limited following. College football’s fan base was not limited to just students and alumni. Teams often had a regional or statewide fan base and some teams like the University of Notre Dame built a national following. Many college football stadiums still in use today were built during this era. Two stadiums, Harvard Stadium built in 1903 and the Yale Bowl built in 1914, predate the 1920s.

By design, these stadiums featured bleacher seating and limited fan amenities. College football games were played on Saturday afternoon. Lighting to enable nighttime events was first installed in outdoor stadiums in the 1930s. Although the first major league night baseball game was played in 1935, many college football teams played day games until the 1960s. Today, to meet the insatiable demand for sporting events to fill the television schedule, college football games are frequently played on Saturday night. Collegiate games are also played on Thursday and Friday nights to accommodate the television networks.

In the intervening years, all of the stadiums featured have been extensively modified to improve fan amenities including luxury boxes, video scoreboards, and a wider choice of food concessions than peanuts, popcorn, and hot dogs. Seating capacity often dropped when more comfortable seating replaced the bleachers. Record attendance at the stadiums often exceeds the stated seating capacity due to standing spectators.

The average football fan does not associate Harvard University as a major influence on college football, but Harvard began playing football in 1873 and won twelve national championships between 1873 and 1920. Harvard’s 1903 horseshoe shaped stadium was a major influence on early football stadium design. When built, Harvard Stadium was open to the Charles River and seated 42,000. The 1930s postcard below shows the endzone stands that were erected in 1929 to enclose the horseshoe and increased seating to 57,000. Deterioration of the endzone stands and declining attendance necessitated their demolition in 1951. Harvard Stadium returned to its original horseshoe design and today the stadium seats 30,000 fans.

Harvard’s archrival, Yale, plays in the Yale Bowl. The Yale Bulldogs began playing in 1872. The Yale Bowl opened in 1914 and seated 71,000 fans. It was the first elliptical bowl shaped stadium in the United States and inspired the design of other stadiums. When it opened, there were no spectator restrooms. I imagine that put a crimp in beer sales. Yale and Harvard play “The Game” in November at the end of the football season and it is the second oldest continuing rivalry. Many football traditions began at Yale and Harvard such as team mascots and fight songs.

Moving down the east coast to the city of brotherly love, Philadelphia’s Municipal Stadium did not have a college football team as a tenant. Municipal Stadium’s place in college football history is secured by hosting forty-one Army-Navy football games between 1936 to 1979. Once one of college football’s premier matchups, Army and Navy duked it out on neutral territory midway between West Point and Annapolis on the Saturday after Thanksgiving. The Pennsylvania Railroad would construct a temporary station in the Greenwich Freight Yard next to the stadium to provide same day service for over 30,000 spectators on forty trains. Opened in 1926 as Sesquicentennial Stadium, it originally seated 102,000 fans. The stadium was renamed in 1964 to honor President John F. Kennedy. Structural deterioration necessitated its demolition in 1992.

Ohio Stadium on the campus of Ohio State University opened in 1922 and was the largest poured concrete structure in the world at the time. It initially seated 66,210. During construction, there were concerns that the stadium was a folly and would never be filled. However, the game against OSU’s archrival, the University of Michigan in 1922 drew over 72,000 spectators. Over 90,000 spectators filled the stadium for the 1926 game against Michigan. Renovations over the years has increased its capacity to over 100,000 fans.

University of Washington’s Husky Stadium was built in 1920 and is located in Seattle on the shores of Lake Washington. Its original seating capacity was 30,000. The stadium has been expanded several times in the last hundred years and now seats 70,000. For the first sixteen years of its existence, Husky Stadium had an unusual dirt playing field rather than turf. The caption on the back of the postcard states, “A speaker can be heard from all parts of the stadium by the use of a magnavox, a mechanical contrivance that magnifies the voice of the speaker.” Husky Stadium could also be reached by boat.

The Los Angeles Memorial Coliseum was built in 1923 to honor World War I veterans. Since its opening, it has been the home field of the University of Southern California Trojans. From 1934 to 1981, it was also the home of USC’s crosstown rival, the UCLA Bruins. When it opened, seating was 75,000 for college football. Seating increased to 101,000 for the 1932 Olympics and later in the 1930s exceeded 105,000. Until 1964, the coliseum’s capacity was 102,000. The caption on the 1950s postcard below indicates over 102,000 fans filled the Coliseum for a Saturday afternoon football contest. Current football seating is only 77,000.

College football stadiums have periodically provided home fields for NFL teams and other sports such as track, soccer and even ice hockey. When the Brooklyn Dodgers moved to Los Angeles in 1958, the Dodgers played at the Coliseum until Dodger Stadium opened in 1962 and set numerous attendance records. Game 5 of the 1959 World Series between the Dodgers and the Chicago White Sox drew 92,706 fans. It is unlikely this World Series attendance record will ever be broken.

The Rose Bowl in Pasadena, California opened in 1922 and was originally a horseshoe shaped stadium. In 1928, stands were completed in the south end to complete the bowl. It was once the largest football stadium in the U.S. but has since dropped to tenth place. It originally seated 104,000, but now seats 92,000. The Rose Bowl was the home of the Caltech Beavers from 1923 until 1976, but they played to empty seats. The UCLA Bruins moved to the Rose Bowl in 1982. Since 1923, the Rose Bowl has hosted the postseason Tournament of Roses football game except for 1942 when it was moved to Durham, North Carolina due to the fear of a Japanese attack. Traditionally, the Rose Bowl is played on New Year’s Day but is moved to January 2 if January 1 falls on a Sunday.

Dear Readers, If you have an experience in one of these “temples” of American sport or just a story of a memorable football game, please share it (in 50 words or less) with us in the comments section below.

Daniel P. Hennelly is a mystery and science fiction writer from Norfolk, Virginia. A retired university administrator, he has collected postcards since his 1960s boyhood. He specializes in vintage United States postcards. Also, he has an extensive collection of foreign cards he started after receiving a gift from a 1930s honeymoon tour in Europe.
PrevPreviousQuaker Oats
NextJohn Cecil Clay – An American IllustratorNext
7 Comments
Oldest
Newest Most Voted
Inline Feedbacks
View all comments
Peter Senft

Great stadiums. Ask the question, how many have you been to? While all of these are great, historic venues, my vote for the best college football stadium goes to Michie Stadium located at??? Anyone??? Anyone??? Bueller? Bueller??

West Point. I had heard of the stadium and knew it was in the East, but thought Syracuse until Googling.

Never disappointed when I open these articles. I particularly liked this one as I have been a vendor in many stadiums around the East Coast, some long gone. I loved the travel and the feel and wished I had been able to work more venues. The one in this collection I would most have wanted to vend was the Rose Bowl. Good stuff, always good stuff on this site.

Great article. The lack of restrooms at the Yale Bowl is a topic for future research. Consider an article focusing on Virginia and other mid-Atlantic college stadiums. You may discover some equally quirky information. If I recall correctly, the stadium at William and Mary was configured as a livestock auction facility to qualify for Federal funding during the Great Depression. The second deck at UVA’s stadium went unused for a while because cracks developed after construction and school officials feared that it would collapse. The stadium at the Citadel was the site of a near riot when a Citadel student… Read more »

There will be a follow up article next football season. A number of people have asked why their alma mater’s stadium was not included. I’ve already received a postcard of Franklin Field, the stadium of the University of Pennsylvania.

One of the unsung gems of college football is the University of Colorado’s Folsom Field. As an alumni of the University and a former member of the football program while a student there, I may be a bit biased, however, the view and history is unmatched. I always say that the stadium is living, breathing history as it hasn’t changed a whole lot in terms of elements being destroyed or removed since it’s construction in 1924. There have only been additions that add to the gameday experience. For example, the lower bowl is in the same configuration and layout as… Read more » 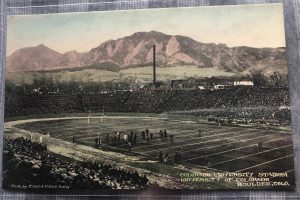