On sketching women, Clay observed: “The lines are there,
but one has to grope for the meaning of the lines.
It is hard to translate a woman into definite
form, but it is interesting work.”

Collect fantasy? Consider John Cecil Clay and his “In Love’s Garden” set published in 1907 by Rotograph — one of the finest examples of American postcard art.

Clay is one of a number of relatively obscure American illustrators whose work appears on postcards. Since most of the artists are represented by only a small number of postcards — in comparison to others such as Gibson, Fisher, or Christy, they are rarely collected and, in most cases, unjustly ignored.

Writing a biographical sketch of a commercial artist or illustrator is like doing a jigsaw puzzle with no idea of what the final product is supposed to look like. Since the art world does not consider such people as “real” or “serious” artists, they are normally excluded from the standard reference works. Deprived of easy answers, you’ve got to gather little pieces of evidence from a dozen sources and hope that a fairly coherent story will emerge.

John Cecil Clay was born on April 2, 1875, in Ronceverte, West Virginia, a small town in Greenbriar County near the southeastern edge of the state. He was a member of the Art Students League of Washington, D.C., and a pupil of Henry Siddons Mowbray in New York City. By the late 1890s Clay was in New York where he achieved a degree of popularity for his crayon sketches of New York actors and public figures which were published in city newspapers.

In December of 1904, at the age of 29, Clay exhibited some of his portraits done in black and white at his studio on West 30th Street. Among the portraits were those of Richard Mansfield, the actor, and authors Booth Tarkington, Joel Chandler Harris, and Mark Twain.

In addition to his newspaper sketches, Clay did illustrations for magazines. His major work was done for Life magazine, the predecessor of the photo-journalistic Life we remember. Clay’s first work for Life appeared in April 1902 and from then until September 1907, he was a frequent contributor.

By 1915, Clay resided on Winfield Avenue, in Mamaroneck, New York, and worked from “The Players,” 16 Gramercy Park, in New York City. At some undatable point—but probably in the mid to late 1920’s—he suffered a paralytic stroke and was forced to retire.

In April 1928, a group of friends presented him with a volume of paintings, etchings, and drawings done especially for him. The friends included James Montgomery Flagg, Oliver Herford, and Howard Chandler Christy. He died on May 24, 1930, at his home “Butterfly Farm,” in Mamaroneck.

The original Life magazine began publication on January 4, 1883, as an illustrated weekly humor magazine. From the first, John Ames Mitchell, its founder-editor, sought to secure the work of the very best of America’s pen and ink illustrators. The most important of these was Charles Dana Gibson who, for a considerable period of time, worked exclusively for Life. Many of the illustrations which originally appeared in Life found their way onto postcards, principally through the reproductions offered by the Detroit Publishing Company in their 14,000 series.

John Cecil Clay was a regular contributor to Life. I’ve identified nearly 100 Clay illustrations which appeared between April 2, 1902, and September 19, 1907. Among these are 12 covers beginning with April 2, 1903, and ending with August 16, 1906. Clay’s work in Life comes in two forms: full-page designs, seemingly intended as frameable prints, and small sketches which are not “illustrations” of anything — that is, although they appear on a page with a poem or some prose, the designs do not actually “illustrate” the text.

In Love’s Garden, (his book mentioned above) was a Christmas gift-book published by Bobbs-Merrill Company of Indianapolis, Indiana. It consists of 37 color plates, each of which features a woman’s head as a blossom of a flower. Most of the plates carry an appropriate line of verse. Interspersed with the plates are poems by authors such as Shakespeare, James Russell Lowell, Paul Laurence Dunbar, James Whitcomb Riley, and Tennyson, which deal with love and nature.

The book was apparently quite popular and certainly is too handsome a thing to ever throw away. As a result, copies of the book, which Life sold in a decorated box for $3, are still fairly available today, as are the individual plates which have been removed from the book.

Clay’s designs are all “sketches” originally done in what appears to be crayon or charcoal; he was not a painter and did not work in oil. His work as a newspaper artist demanded that he be able to sketch quickly. Instead of having his subjects “pose” for their portraits, Clay was forced to use whatever moments he could. Talking about his sketch of actor Richard Mansfield, Clay remarked: “There would have been no use in attempting to get a satisfactory sketch of Mr. Mansfield in one sitting. I made that sketch in eight sittings of about six minutes each. Mr. Mansfield gave me the time between acts, in his dressing-room. Of course it wasn’t the easiest way to work, but it was the only way, in that case. Mr. Mansfield is a very nervous man and a long sitting would have driven him wild. As it was, he came off the stage full of his role, all enthusiasm and spirit. For a few moments he held the mood. After that I put away my work and waited until the next evening.” 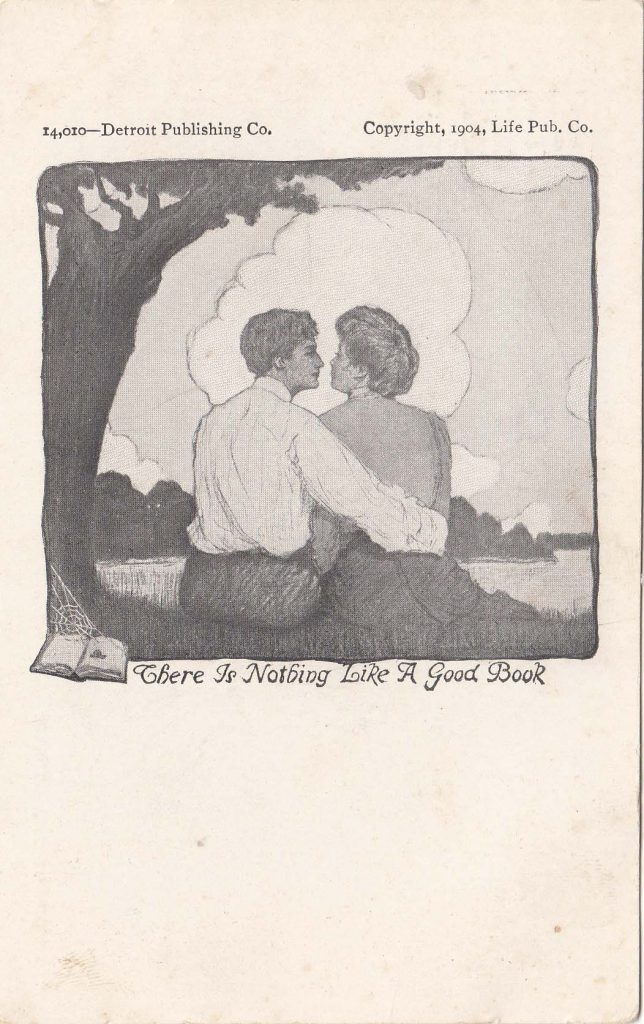 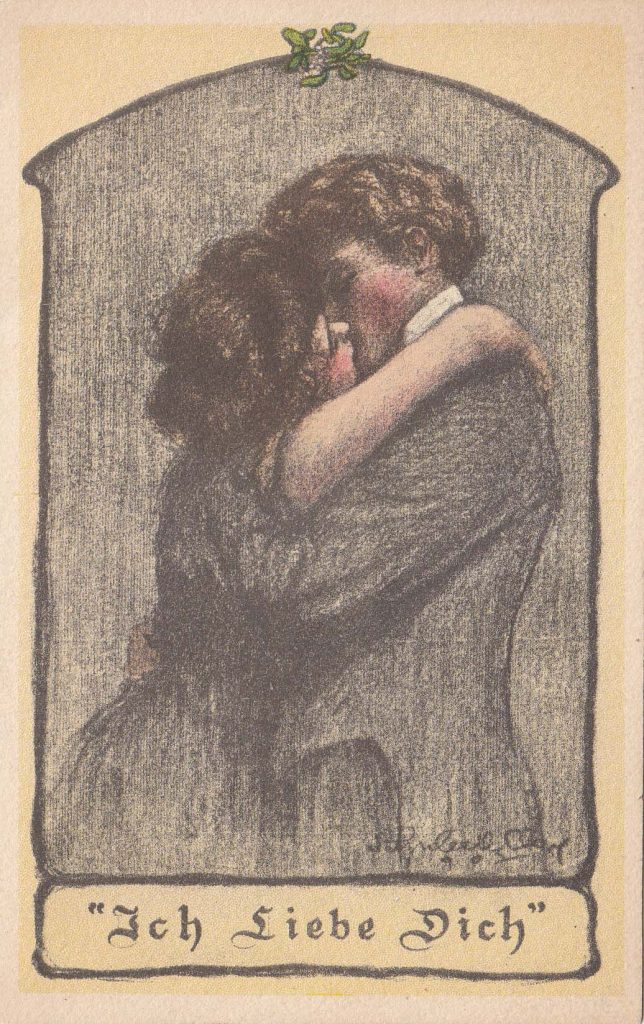 Despite his early fondness for sketching portraits, nearly all of Clay’s work for Life deals with romantic subjects, beautiful women, lovers entwined, lovers and nature. Popular illustration of the period consistently reflected such themes, but Clay’s world is especially innocent and idyllic. Unlike the work of an artist such as Gibson, there is no narrative or story dimension to Clay’s illustrations, no satire, no social commentary. Clay’s lovers are lost in one another.

Gibson (and others) had popularized an ideal American woman and American beauty. Even though the Armour series pictures “The John Cecil Clay Girl,” there was no Clay girl in the sense that there was a Gibson girl or a Fisher girl. Clay disliked repetition and never wanted his women to be a particular type.

John Cecil Clay’s work appears on at least 18 different postcards published by four different companies: Rotograph, Detroit Publishing, P. F. Volland, and Armour & Company. The largest group is a set of 12 from In Love’s Garden published in 1907 by Rotograph. As a set these are the finest American artist-signed postcards. The designs are delicately executed and the quality of the printing is exceptional, though subtle. Some of the cards, especially “The Tiger Lily,” “The Lotus,” “The Violet,” “Black-eyed Susan,” “The Poppy,” and the untitled design rival in quality and execution anything done by European postcard artists.

The Rotograph set is not common, although it seems to have been reproduced in fairly large quantities. The first printings have undivided backs; later ones, divided backs. At some point all or some of the cards were printed with their original hand-lettered captions removed and a small poem substituted instead. The latest postally used example that I have dates from April 1915.

Detroit Publishing Company included three black and white Clay illustrations in the 14,000 series, including a series which reproduces illustrations taken from Life and Harper’s Magazine. None of the three is particularly exciting, although two were also offered as prints for framing by Life. “A Cozy Corner” first appeared in Life on August 6, 1903; “A Fair Exchange is no Robbery” on March 31, 1904; and “There is Nothing Like a Good Book” (above, left) was a cover design for June 2, 1904. It is possible that there are some other Clay cards in the 14,000 series; only one other title listed in Papell and Lowe’s Detroit Publishing Company Collector’s Guide sounds like a Clay – 14177: “A Loving Cup.” I’ve not, however, seen that card.

P. F. Volland did at least two Clay signed postcards, both also reproduced from Life: “Ich Liebe Dich” (above, right) originally appeared in Life on December 19, 1902, and was later offered as a print; “Auf Wiedersehen” was offered as a print in September 1907. Given the numerical sequence on the Volland cards (401 and 403), it’s likely that there is at least one additional Clay card. Volland did not use the 400 number and 404 is signed by Angus MacDonald.

Professor George Miller, University of Delaware, an accomplished collector and a frequent contributor to a national postcard magazine, has granted Postcard History permission to republish his writings from the 1980s and ‘90s. We are proud to offer his work to our audience. His postcard history lessons are timeless!
PrevPreviousAre You Ready for Some Football?
NextSandpaper SoapNext
4 Comments
Oldest
Newest Most Voted
Inline Feedbacks
View all comments
Stein Høibø

Thanks for introducing me to this artist.

I wonder if the Tiger Lily, Carnation, and Violet cards sold especially well at Princeton, Harvard, and Yale, respectively.

Kudos to Prof Miller! I know how difficult it is to research illustrators so I read this article not only with the usual interest but with respect.

This is all very interesting. I guess I would love to see more examples. It is great to zero in on an artist who we have not heard about before. Thanks very much for this opportunity.