Chautauqua is a Native American word that is fun to say; especially when you know what it means. The etymology of the word is from the Iroquois and a literal translation is impossible but we come close in English when we say, “a bag tied in the middle.” 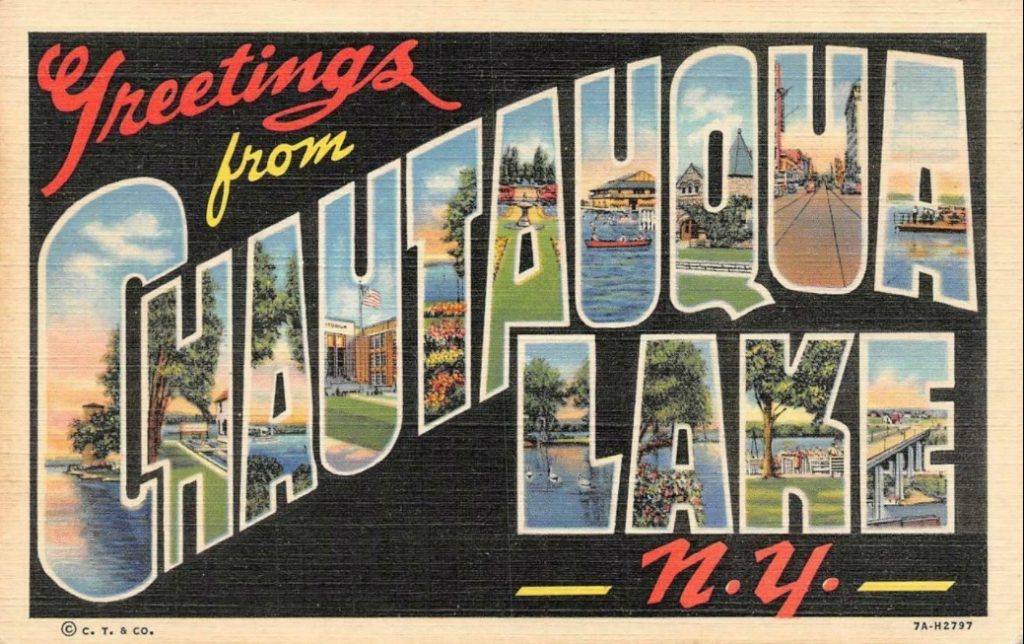 Hundreds of Chautauqua themed postcards show lakeside and outdoor activities at Chautauqua style gatherings near the New York lake, but the concept was equally popular in Ohio, Illinois, Texas, Nevada and places where rural families would gather but a few times each year. 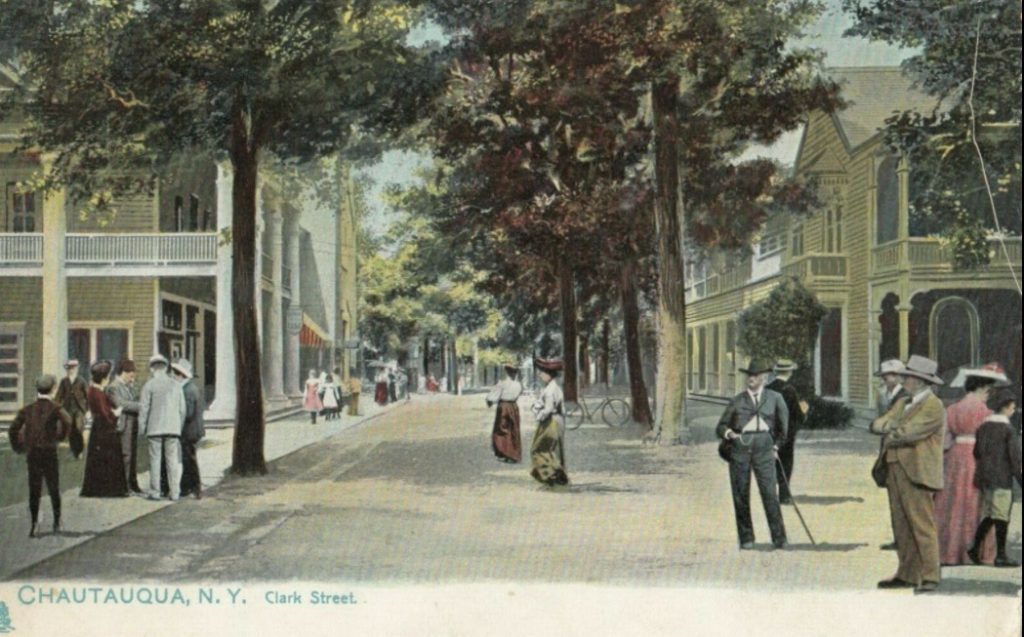 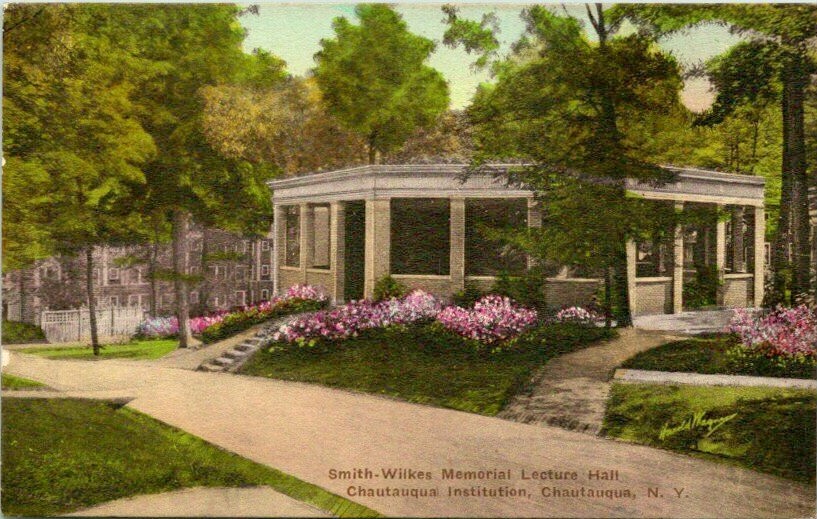 Study classes specialized in topics from a very broad spectrum – apple agriculture to beekeeping – rotated through the years, but the curricula had several mainstays, i.e., art education, literature and poetry study, and music.

Even at the early gatherings (1873 or shortly after) those who attended Chautauqua took musical instruments and registered to join the orchestra. The only account so far located was authored by none other than Elbert Hubbard, the founder of the Roycroft community in nearby East Aurora, New York. Penned for a Buffalo (NY) Enquirer newspaper, he recounted his evening in a Chautauqua Orchestra’s audience, “listening to music; the language of the angels.” 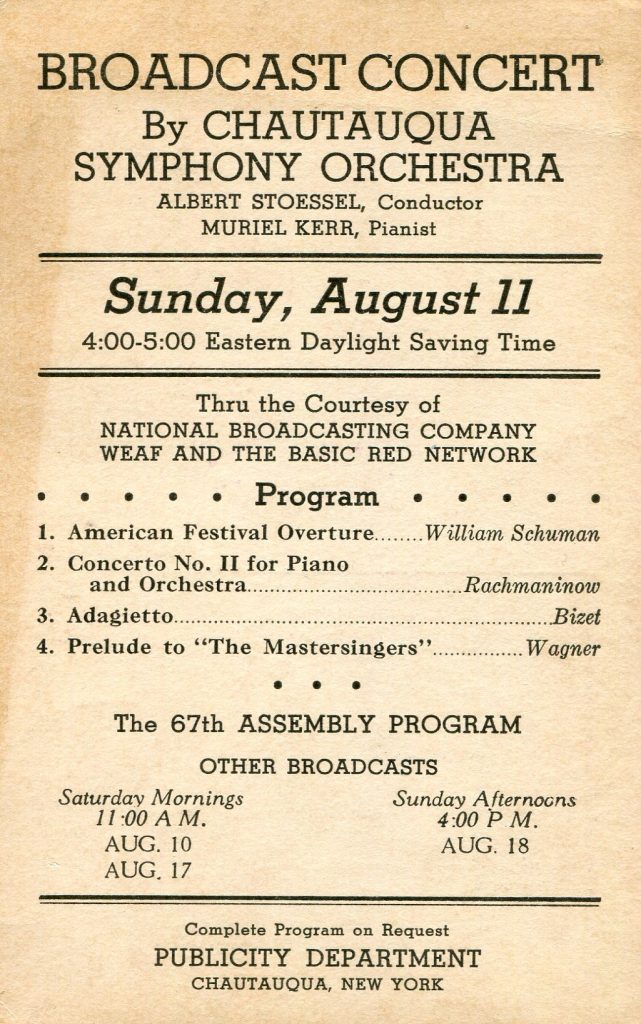 One postcard of special interest is this advertising card for a Broadcast Concert by the Chautauqua Symphony Orchestra.  A little sleuthing was needed to determine that the program was a broadcast of music recorded at the 67th Assembly – that was 1940. There are many bits of interest on this card:

Sarnoff was adamant that his NBC Radio Network should devote as much airtime as possible to concerts, lectures, and music. Sadly, sometime in the last few decades someone made the decision to sell the radio stations (2004) and change their television programing to half-hour sit-coms, motion picture rebroadcasts, pop-culture drama (crime, medicine, and adventure), and non-scripted reality shows. Sigh!

The Chautauqua orchestras were not the kinds of organizations recorded by “label” record companies, and few, if any, record pressings were made. They were not even close to being professional musicians and their collective (musical) color was different from year to year. Notwithstanding the quality of performance, good or not, their performances were seldom reviewed. However the music they played as been recorded on many occasions by professionals and you should do yourself a favor. Go to Youtube.com, spend an hour listening to the music. You too, can then claim to have heard the voices of angels.

Ray Hahn is a retired educator, but he has never stopped teaching. His decades of researching, writing and editing a newsletter for the South Jersey Postcard Club has been a world-class education in trivia. In addition to postcard collecting, Ray’s other interests include history, genealogy, and touring the world with his wife Marie. Ray often advises his readers to "Join me as we explore the world one postcard at a time." Ray and Marie live in New Jersey.
PrevPreviousEast Coast North American Lighthouses – The First in a Series
NextI Wonder If She’s Wearing My BadgeNext
1 Comment
Oldest
Newest Most Voted
Inline Feedbacks
View all comments
Bob Kozak

Coincidentally, this article appeared just a few days after an Elbert Hubbard statement was featured in the “Cryptoquote” puzzle syndicated to daily newspapers (yes, I still read the “dead tree” edition).