At a postcard club meeting about five years ago, one member brought a friend along and introduced him to the group. His first words were, “I’m not a postcard collector.” He went on to tell us he had recently helped a friend empty a house in their neighborhood that was home to a 93-year-old gentleman who had willed the proceeds from the sale of his property to the village library.

On a shelf in one bedroom of the house were three shoeboxes filled with postcards. All from the same place, but all different. There were more than four hundred postcards of Yellowstone National Park.

The cards were pristine. Only four had been mailed. The postmark on one was YELLOWSTONE, WYO, but the date was smeared beyond readability, the other three were mailed in 1923, 1926, and 1937. It was suggested that a thorough examination of the lot be done in order to make a checklist, and I got the job. In the end, the library got $400 from the sale of the cards.

History is frequently based on rhyme and reason, but after many hours are spent in researching and organizing and neither rhyme nor reason is apparent, there is simply no history. A few points of information gathered from the examination were:

The cards chosen for this article are ten favorites. All but one (see * in caption of card 10) are photographs taken by Mr. Haynes. I hope you enjoy the variety. If you choose to collect Haynes’s postcards of Yellowstone, look for the copyright notice on the left edge of the address side, it reads: Copyright by Haynes Picture Shops, Inc., 341 Selby Avenue, St. Paul, Minn. and Yellowstone Park, Wyoming

There is no known record of an authorized decree making F. J. Haynes or J. E. Haynes the official photographers of Yellowstone National Park, but as in common-law, they have been referenced as such for so long everyone believes it to be true.

Frank Jay Haynes (1853-1921) and his son, Jack Ellis Haynes (1884-1962) are considered the photographic historians at Yellowstone National Park. Their photographs documented the early years of the park and continued for more than 90 years.

The father and son team kept a studio in St. Paul, Minnesota, as well as a concession at the park. Their black and white photos of the late 19th and early 20th centuries were much sought after by collectors around the world.

Frank J. Haynes was born in October 1853 in Saline, Michigan, and married Lily Verna Synder in 1878. Their second son, Jack Ellis Haynes, inherited his father’s business at the park in 1916 and continued as a resident photographer until his death in 1962.

Frank Haynes first appeared in Yellowstone in 1875. He was newly employed by Northern Pacific Railroad, ostensibly to replace Asahel Curtis, a celebrated photographer from the Pacific Northwest who started the project of photographing the railroad route from Minnesota to the West Coast for advertising and marketing. When Curtis decided to move to Canada to document the Klondike Gold Rush, the railroad transferred the project to Haynes. 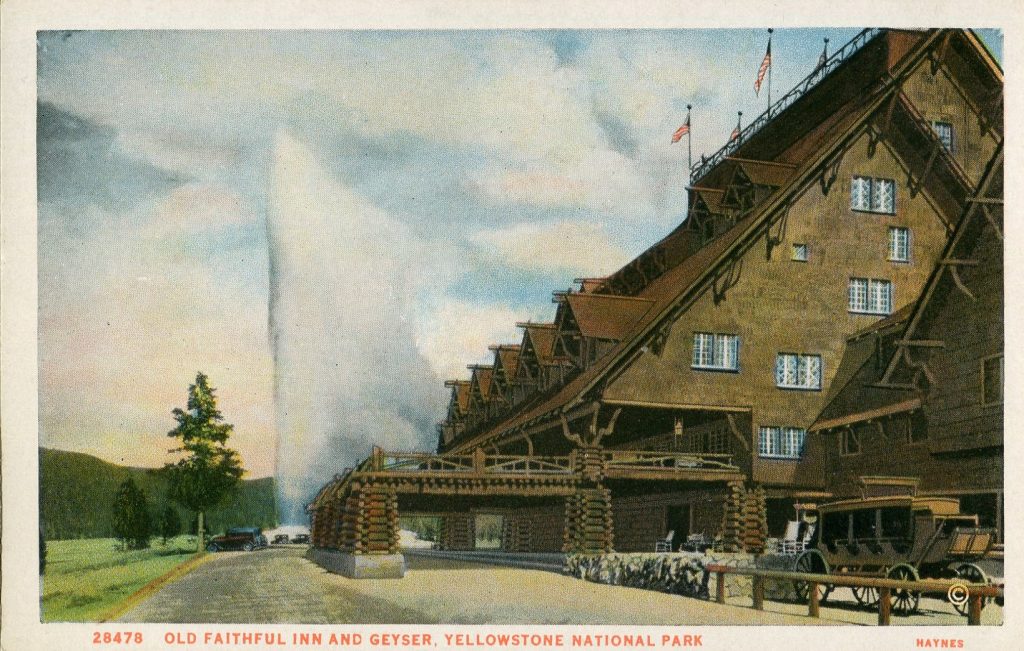 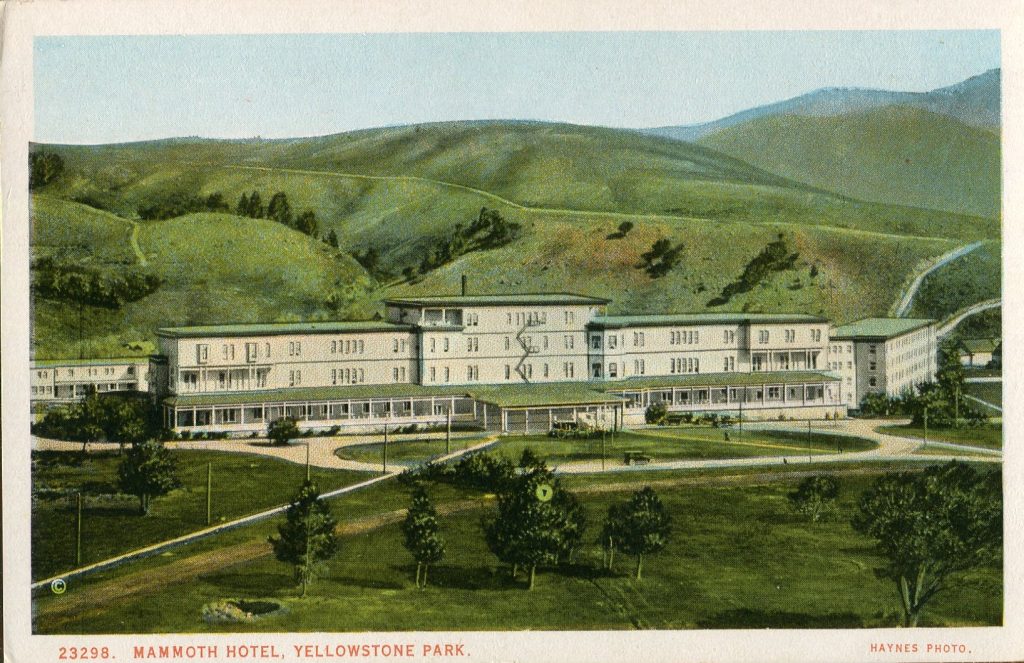 In 1884, Haynes leased four acres at both Old Faithful and Mammoth Hot Springs in Yellowstone National Park, where he opened his first photo shops. His son Jack Ellis Haynes was also born that year. Frank eventually operated photo shops at every major location in Yellowstone Park. 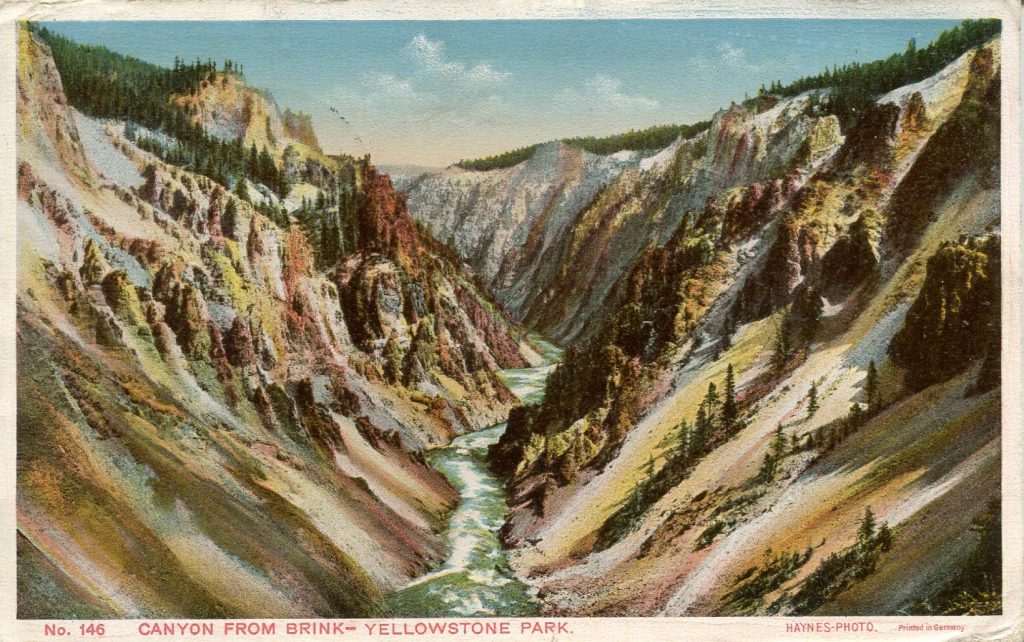 Haynes’s pioneer spirit caused him to enlist in an 1887 winter expedition during which he made the first winter photographs of the park. The winter views were exceptionally popular, yet they sold at the same price. Three years later he published the first Haynes Guidebook; it continued annually until 1966. 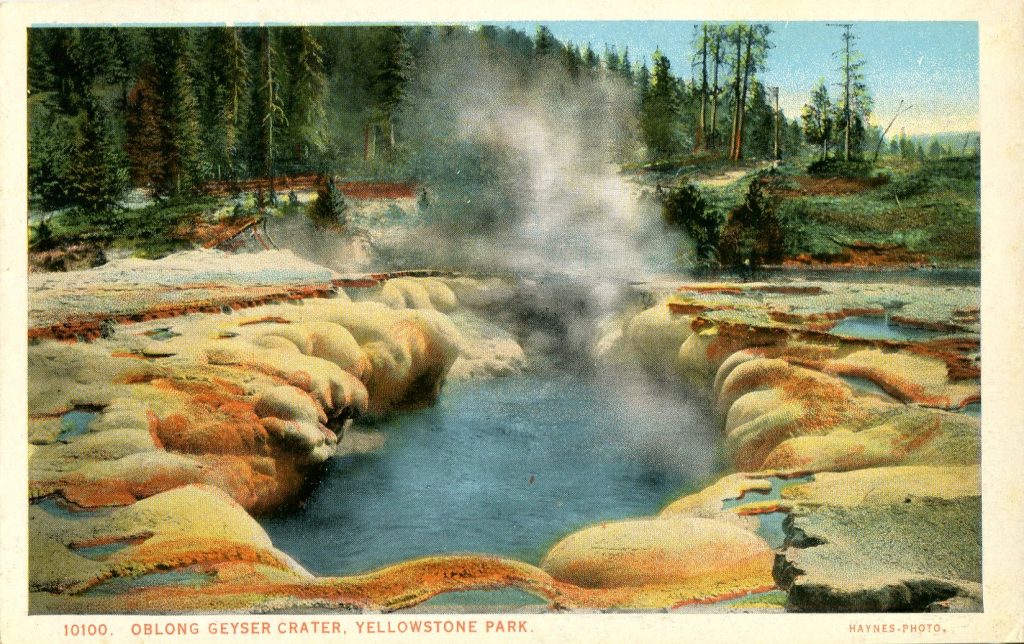 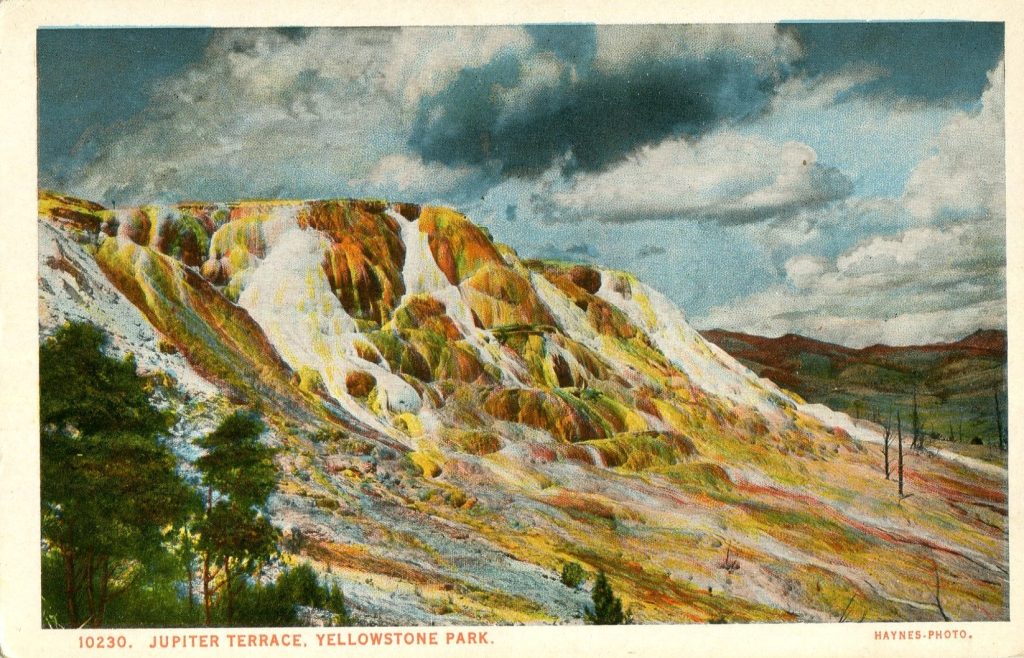 His first postcards appeared circa 1905. There are serious contradictions over the date, some claim to be as much as five years older. Haynes cards formulate the major portion of the afore mentioned collection. 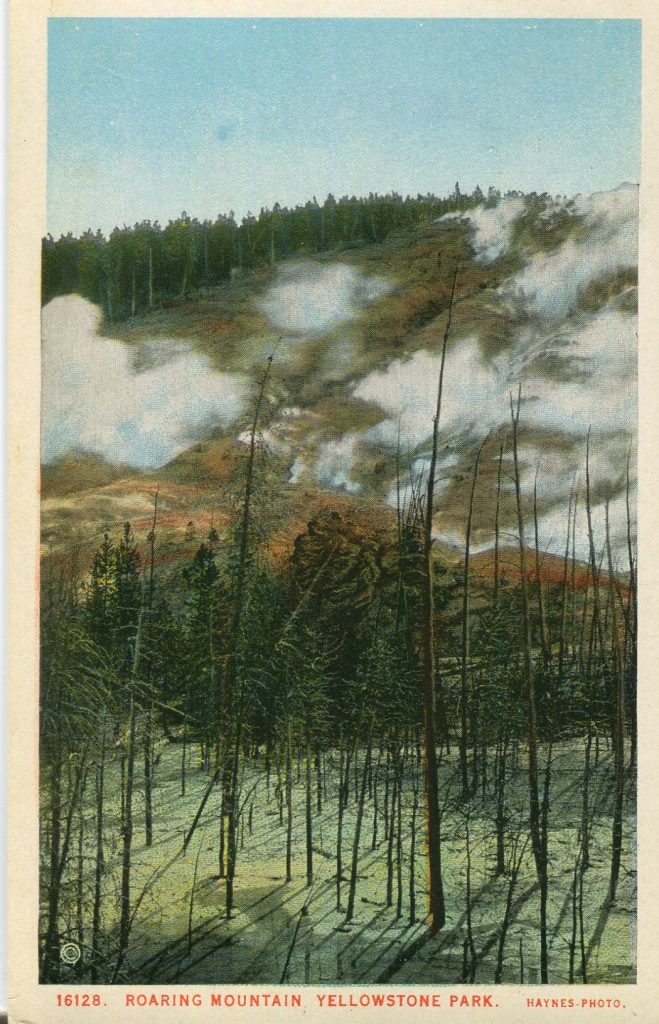 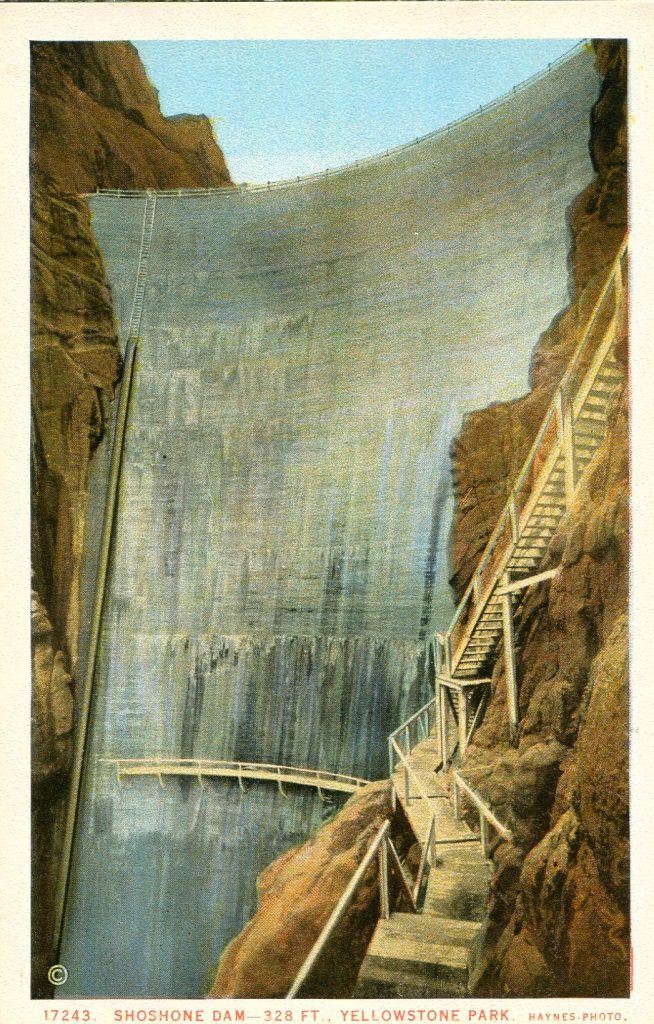 Frank Haynes retired in 1916. Jack Ellis Haynes had more than a decade of experience with his father and was the logical choice to continue the business. He did so for the next 46 years. His devotion and dedication to the affairs in the park earned him the title of “Mr. Yellowstone.” 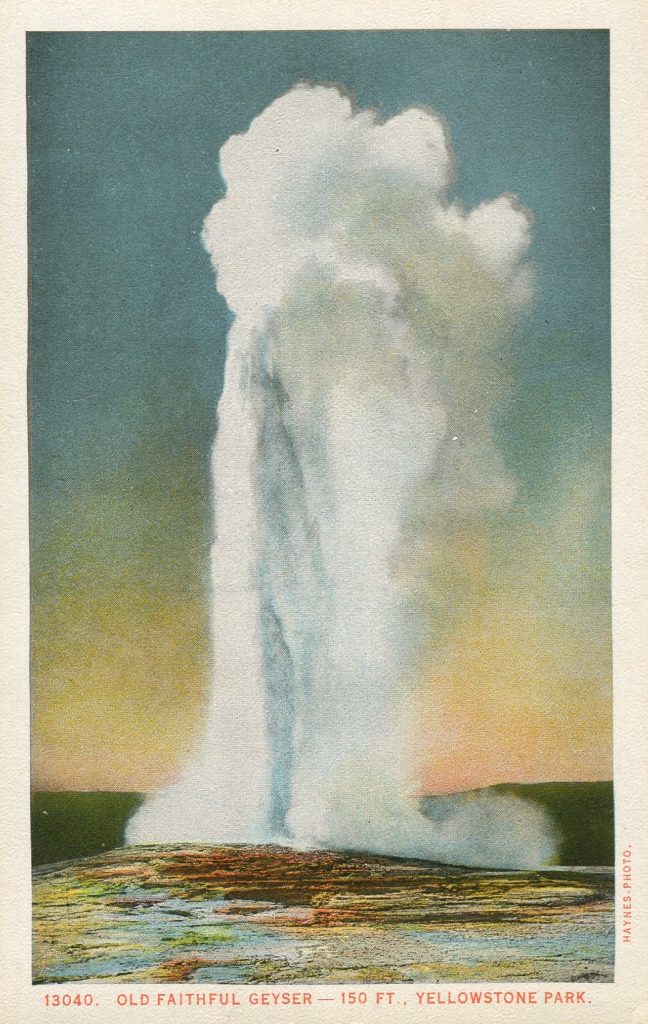 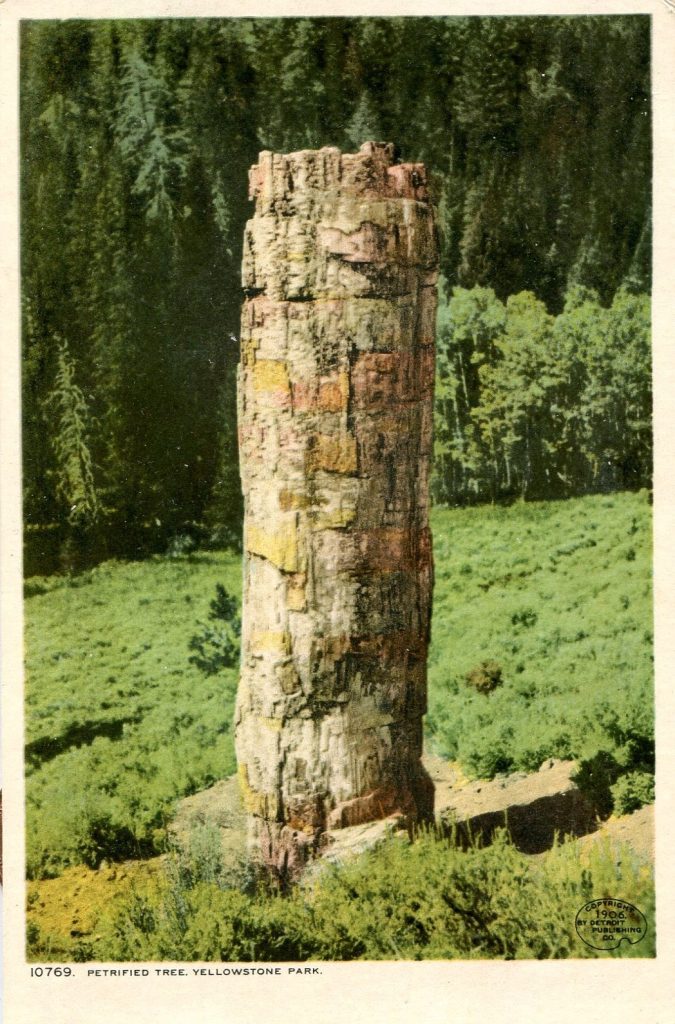 * The photographer of this image is unknown. He was likely one of many sent to Yellowstone by the Detroit Publishing Company. Nevertheless, the photo is exceptional and deserves to be shared.

After Jack’s death in 1962, his wife Isabel ran the photo shops until 1967, when there were thirteen Haynes Photo shops in Yellowstone Park.

Ray Hahn is a retired educator, but he has never stopped teaching. His decades of researching, writing and editing a newsletter for the South Jersey Postcard Club has been a world-class education in trivia. In addition to postcard collecting, Ray’s other interests include history, genealogy, and touring the world with his wife Marie. Ray often advises his readers to "Join me as we explore the world one postcard at a time." Ray and Marie live in New Jersey.
PrevPreviousA Cat and a Bit of History
NextSunday Odds and Ends – Part 3Next
4 Comments
Oldest
Newest Most Voted
Inline Feedbacks
View all comments
Marie Himmelberger

Having spent a summer during my college years working in Yellowstone Park, I found this article very interesting. There was so much of the park I did not see.

I once did a display for a show featuring animals begging for food. One or two of the cards depicted bears approaching cars in Yellowstone. I don’t remember whether the photos were by Haynes.

Bob – Here was one of my favorite ‘bears in Yellowstone’ postcards (not a Haynes, and a Continental). Based on the picnic table style and ubiquitous Coleman stove, presuming early 1960s. Bear wasn’t exactly begging for food, but along the same lines. I found this unused in a 25¢ box here at the Denver Postcard Club and mailed it to a nephew earlier this year. 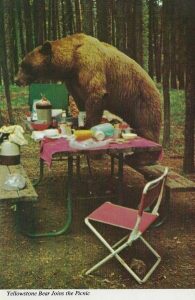 Nice article. The earliest Yellowstone postcard was a slightly oversized pioneer card printed by Albert Kayser in 1897. It had multiple views of Yellowstone and I have documented that at least one of the views was taken (and thus the property of) Haynes. 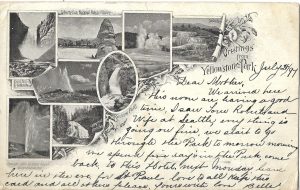