There is a considerable amount of educational literature devoted to understanding large numbers. There are books designed to aid a child in learning what a million looks like in terms of individual items, like the third-grade teacher who developed a project focused on accumulating one-million teabag tabs. The internet is rife with stories about similar schemes.

In educational communities the theory of grand numbers seems to stop at one million. Most of us know what the next multiplicative is – it is a billion – one-thousand times one million. Then there are trillions; 1000 x 1,000,000,000. Then comes quadrillion, quintillion, sextillion, and more, but even the government hasn’t learned the numbers in the ranges above 1 followed by 12 zeros.

This is getting silly, so let’s get to the point.

A calculation has been done that suggests at least one hundred twenty million gallons of water flow over Niagara Falls every minute. That is enough to fill 5,750 backyard pools.

Time is also a sometimes-difficult concept. Since 1967 one second in time has been defined as “the duration of 9,192,631,770 cycles of the radiation corresponding to the transition between the two hyperfine levels of the ground state of the cesium 133 atom.”

Now I’m sure there is someone who understands everything you just read, but I am not one of them. Therefore, let’s concentrate on the beauty of a natural wonder and all the postcards we could collect.

In a recent eBay search for Niagara Falls I found 15,429 cards for sale. The prices ranged from modest, to ridiculous, then went straight to idiotic. The idiocy ended at $1,195. There was no explanation for the high price.

My collection of Niagara Falls cards is old. It was one of the first topics I collected. My wife and I have visited the falls three times, we had a few good meals in a restaurant (long gone) across the street, I played one of the best 18 holes of golf ever at a nearby course, and witnessed a spectacular light show from our hotel window high on the hill to the west of the falls.

The water that flows over the Horseshoe Falls part of Niagara is the Niagara River that forms on the east bank of the Great Lake Erie. The Horseshoe is just a few feet short of a half-mile wide. The water falls 165 feet into a part of the Niagara River called the Whirlpool and from here continues northeast for approximately twelve miles and empties into the Great Lake Ontario.

Here are some of my favorites:

These printed real photo cards were manufactured by the King Card Company of Toronto. 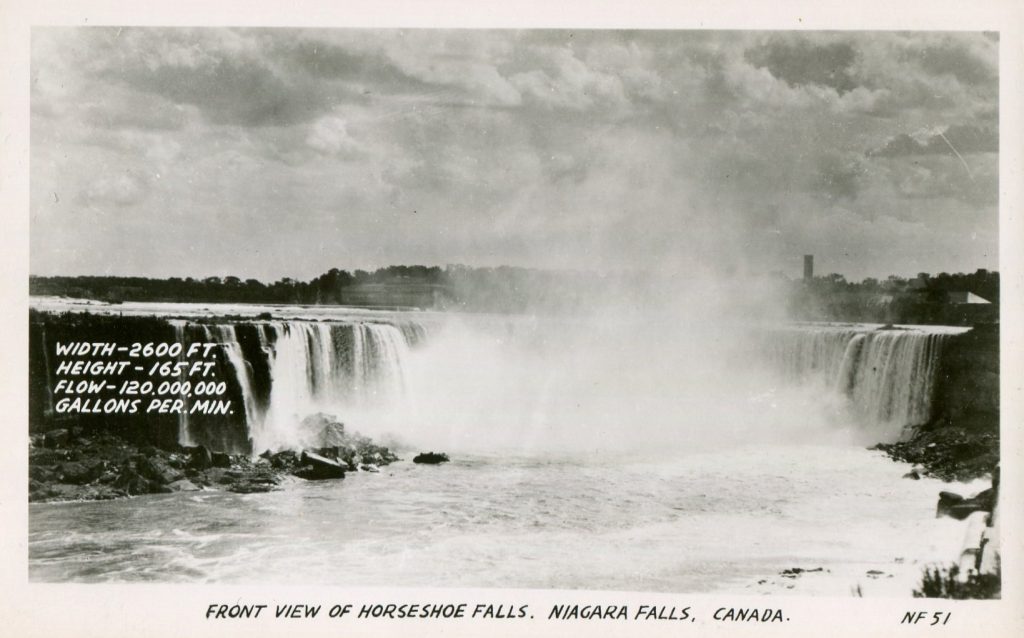 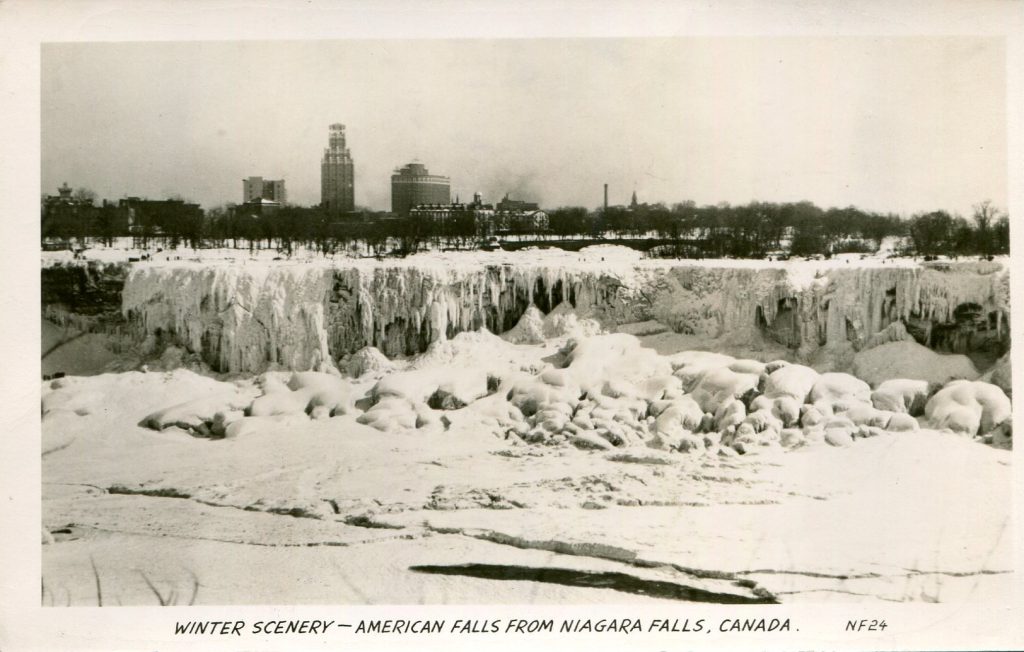 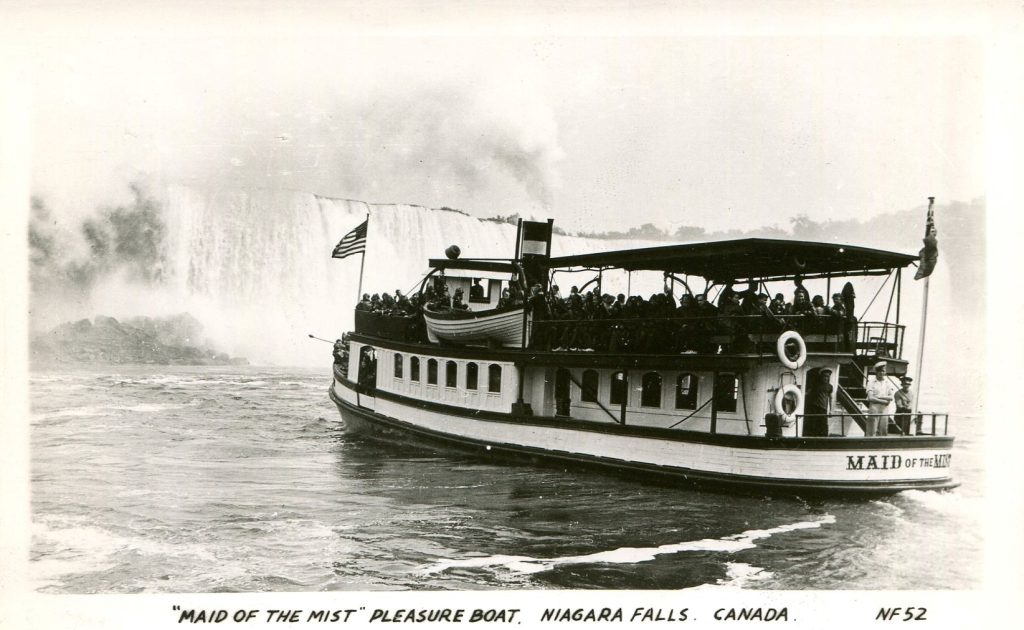 Winter was once a special time in the Great Lakes region. The temperature would drop below freezing – often as early as the last week in October – and stay low for weeks or even until Spring. The falls would never freeze solid, but the misty cloud above the falls would turn to ice and form icicles on everything in a three-mile radius.

A. C. Bosselman’s (from New York) cards capture the magic of winter at Niagara. 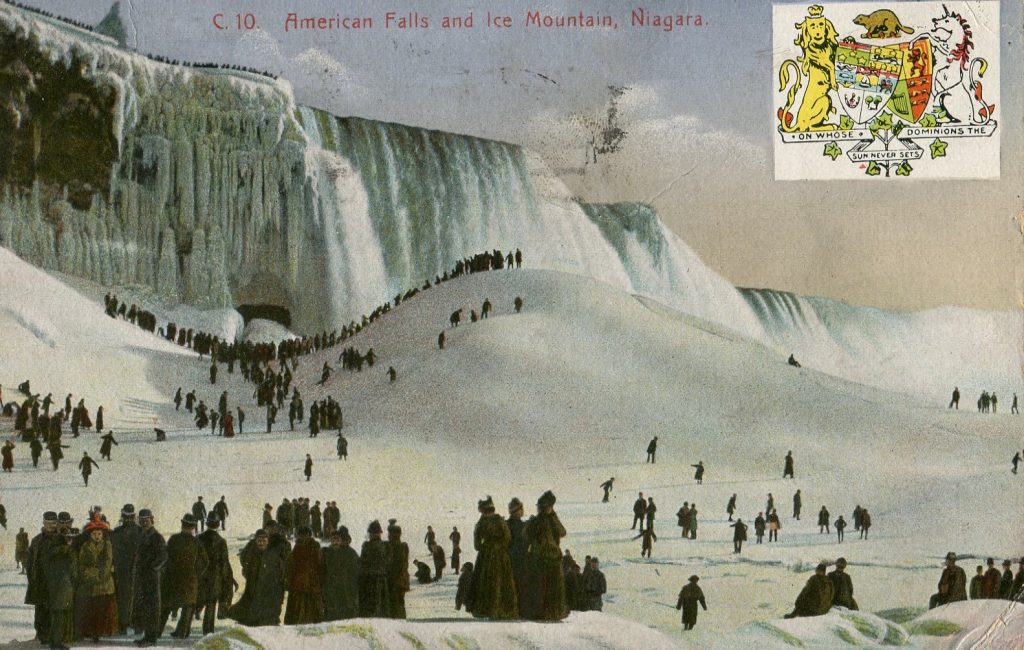 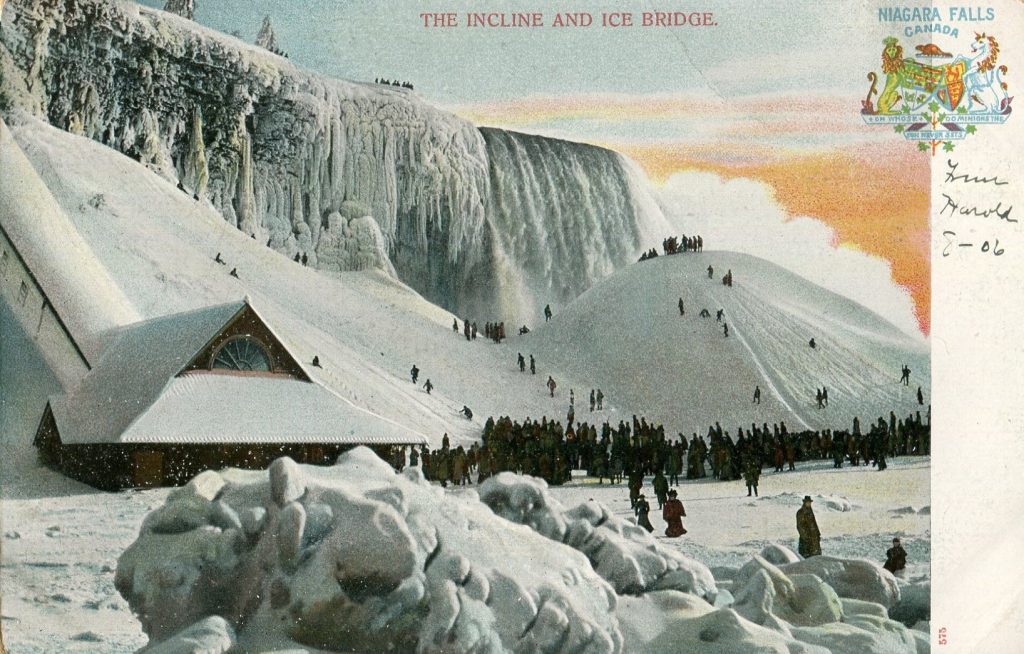 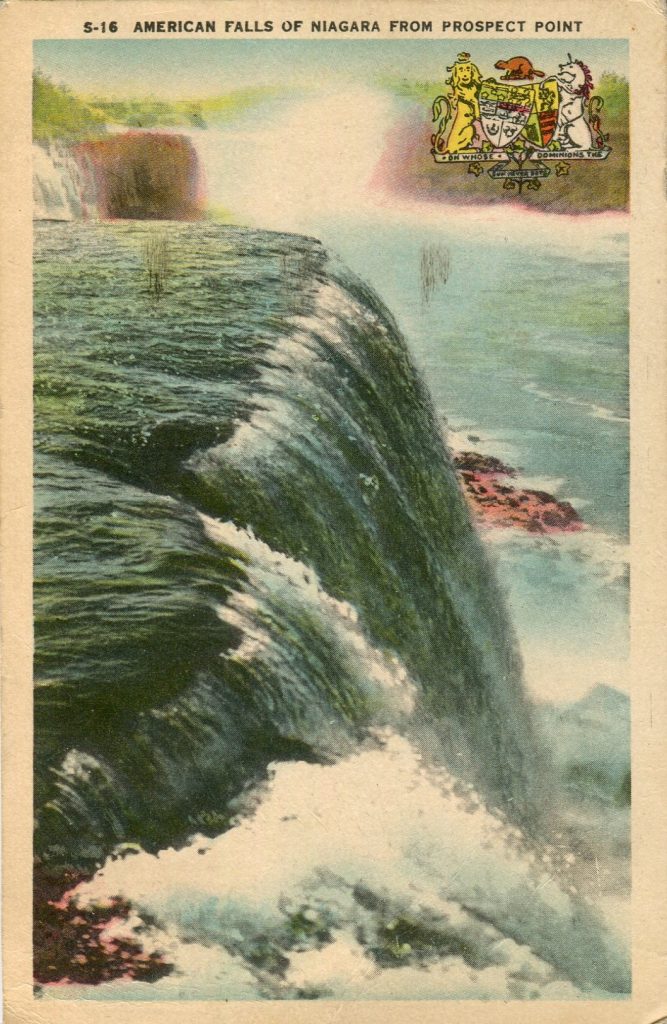 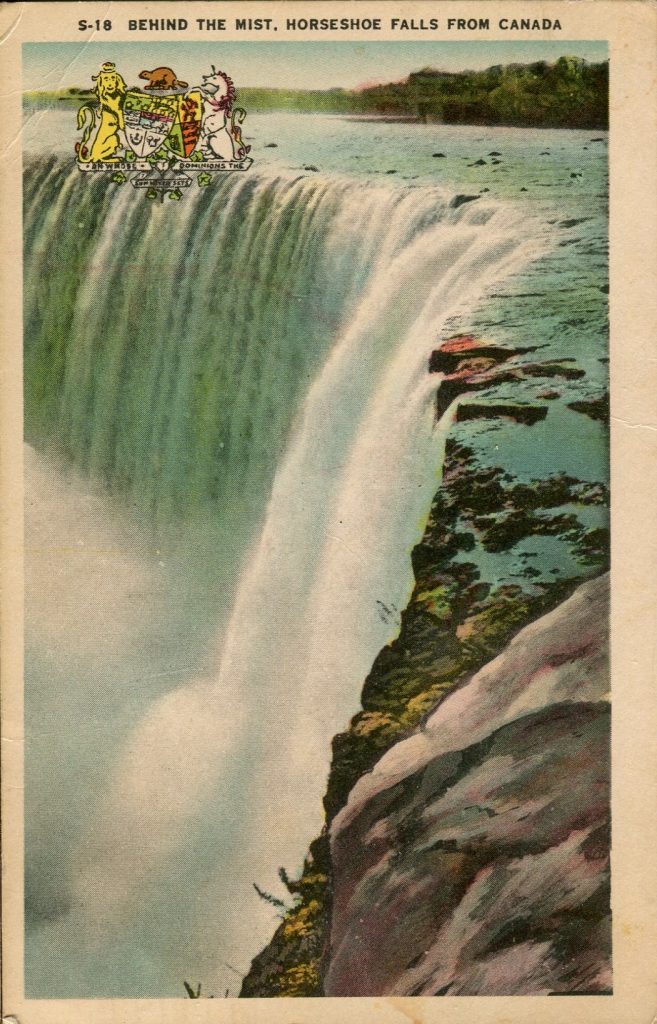 Tuck and Sons is my favorite publisher of Niagara Falls postcards. I have no special source of information, but the Tuck data base shows 48 different entries with Niagara in the titles. I’ve been collecting these cards for more than 20 years. I have 44.

The Vignettes seem to be the earliest. They date to 1904. 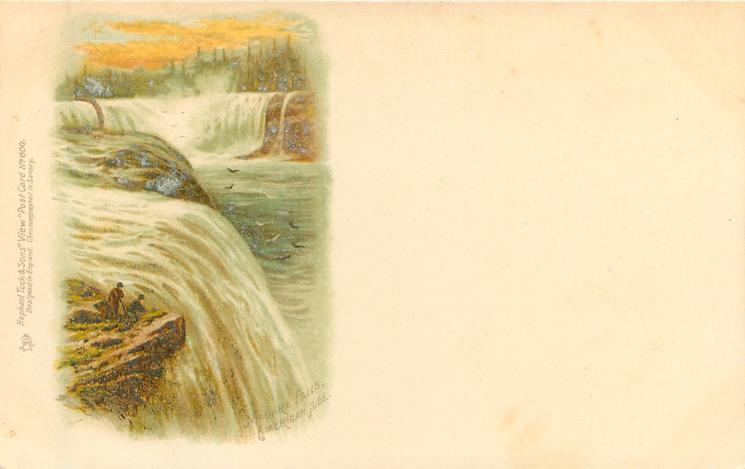 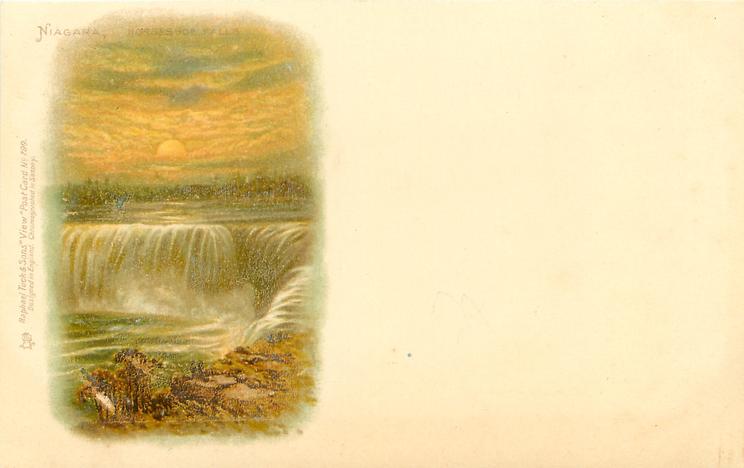 The Tuck Series #1015 entitled The Falls at Niagara exhibit wonderful detail. Regrettably, none of the artwork is signed. 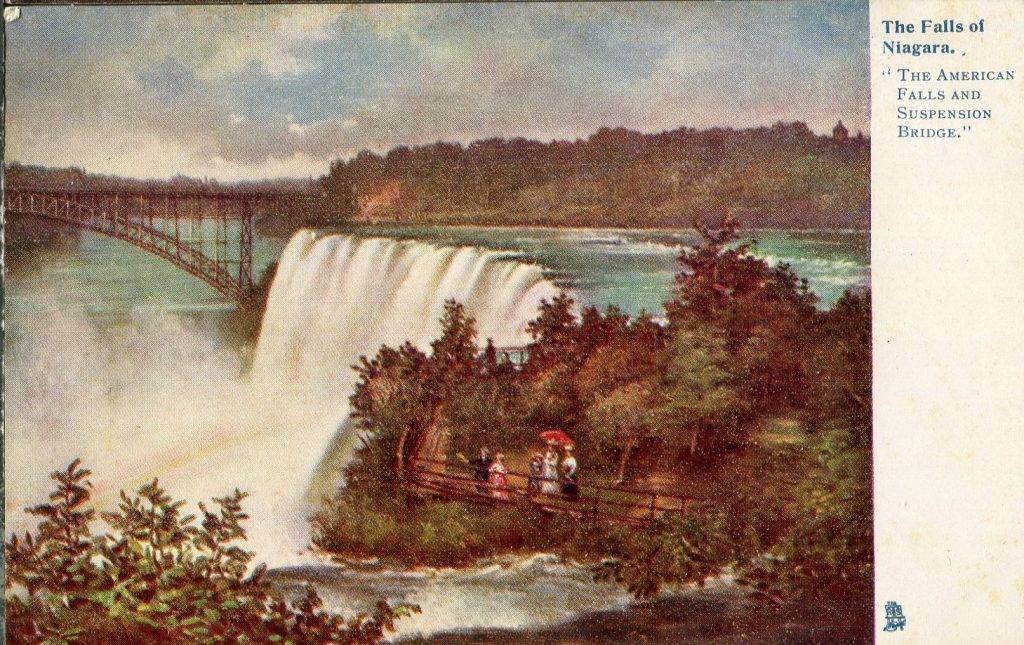 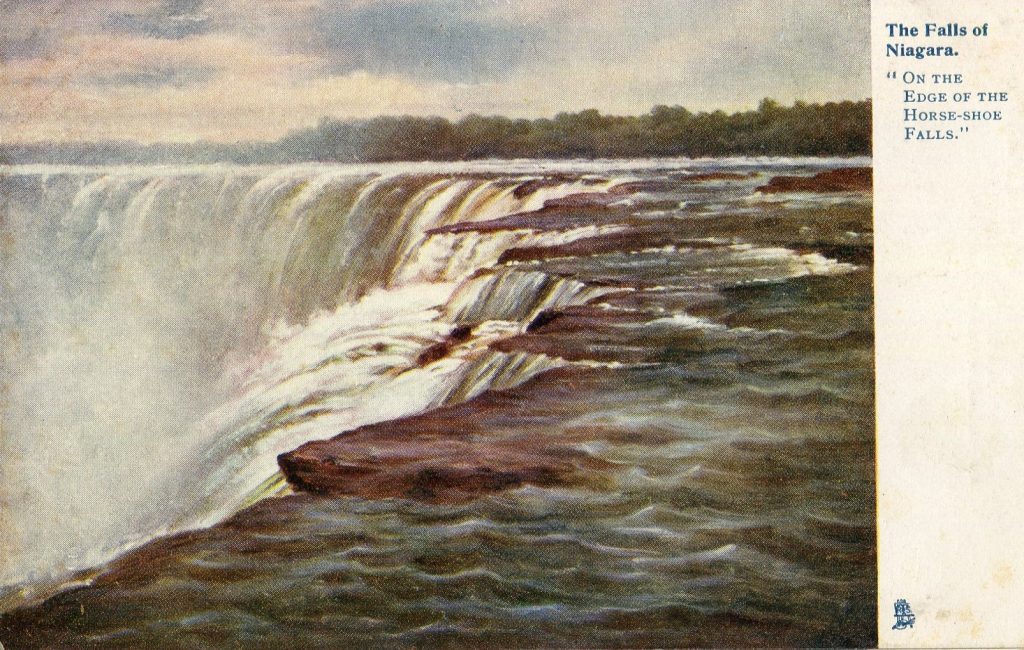 There are dozens of Niagara cards manufactured in the US as well as Canada that were done by unknown publishers. They came from all eras of collecting.  One of my favorites follows, the title is American Falls from Goat Island. 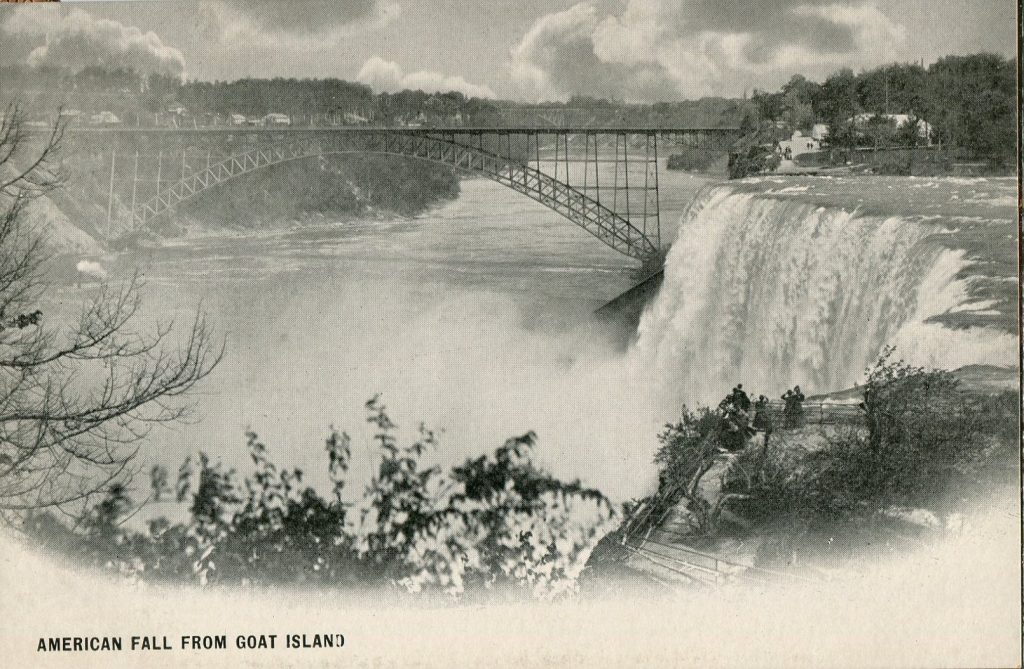 If you have never visited Niagara Falls, you should plan a trip to see these unbelievably beautiful works of nature. The first time I visited was about sixty years ago, it was much different then; it was rustic and friendly. My second trip was with my brand-new bride. We stayed in a hotel in Queen Victoria Park, and we were treated as if we were royalty. (I’m going to feel really old when I tell you that when my wife and I visited Niagara on our honeymoon the nightly rate for our three-day stay was $19. I think you will be expected to pay a bit more.) On that trip we explored the power plant and got to stand on Table Rock. It was great fun to be so close to something that was so powerful as that rushing water.

Today Niagara is no longer rustic, but it is a very friendly place. You will likely strike-up a conversation with a total stranger and leave knowing their entire life-story. Also, there is Niagara Falls State Park Visitor Center at 332 Prospect Street in Niagara Falls, New York. They will give you the details on everything available. The list goes from carriage rides to ziplines.

Enjoy and make me a promise that you will stand at the water’s edge for more than a minute so  you can tell your friends that you watched more than 120 million gallons of water flow over the falls.

George “Burt” Martin loves to travel to the member countries in the Commonwealth of Nations. He has visited eleven of them. Burt relocated to California after retirement, but he hails from a small market town in the Cotswolds of England where he lived in a house that was built in 1639.
PrevPreviousThe Crusade for “Pure” Milk
NextTemperanceNext
4 Comments
Oldest
Newest Most Voted
Inline Feedbacks
View all comments
Bob Teevan

A very enjoyable read together with some attractive cards.

I enjoyed this very much and am pleased to see other collectors who also get a kick out of collecting a common subject and find some of the “unusual” views. For years now I have been working on Balanced Rock in the Garden of the Gods near to Colorado Springs, Colorado. When I “have enough of them” I usually make a display board for our Wichita Postcard Club Show and postcard exhibit. Often I keep these display boards together and have them handy for an instant program or presentation for some group to show what it is that we enjoy… Read more »

I remember Shredded Wheat boxes touting the product as “The Original Niagara Falls Cereal”. Here is a relevant image: https://www.digitalcommonwealth.org/search/commonwealth:6w924c61w

I too collect Niagara Falls cards and concentrate on the earliest cards and folders as a history of tourism. To my knowledge the earliest US Niagara falls cards were printed in 1893 – several varieties. Northrup is one printer and others are not named. I have one set of early Niagara Falls cards on government backs and the picture of the falls is glued on the card with a patent notation. I show an example below. Many Niagara different Niagara views were printed on the large size grant card (UX10) and well as the smaller UX 12 and UX 14.… Read more » 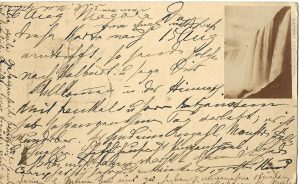