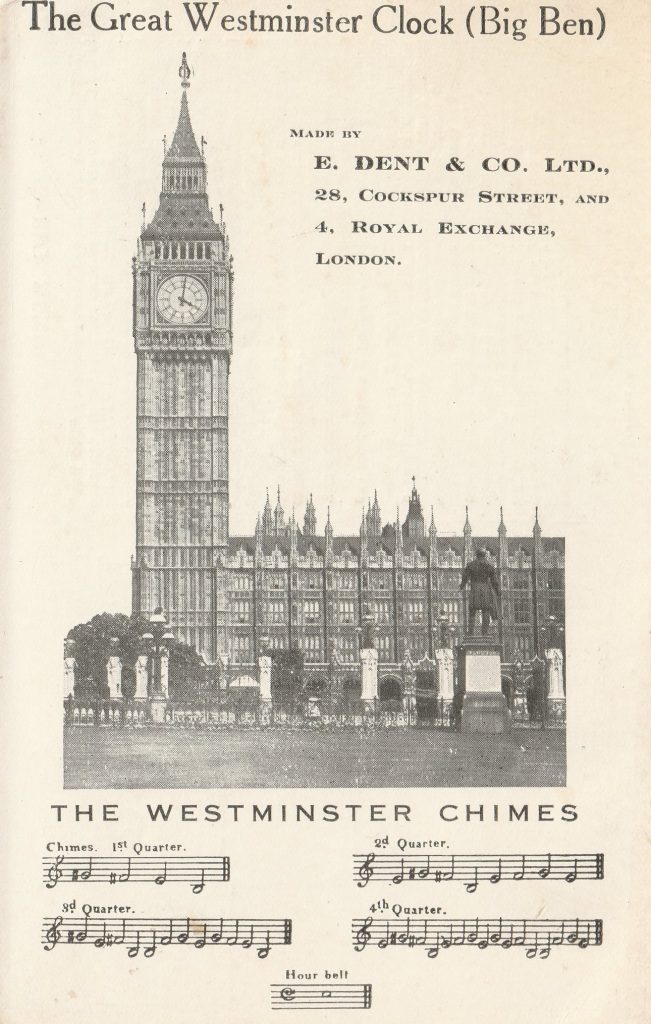 This card of the Great Westminster Clock (Big Ben) also includes the House of Parliament from a perspective looking east toward the River Thames and the Westminster Bridge.

The card includes the music score for The Westminster Chimes, and it is an advertisement for E. Dent & Co. Ltd.

Edward John Dent and Company won a competition in 1852 to manufacture and fix-in-place the massive mechanism that became the world’s most famous public clock. Sir George Airy, the astronomer royal for Queen Victoria arranged to pay £1,800 to Dent to build the clock based on plans drawn by Edmund Beckett Denison.

Edward John Dent died in 1853 and it was left to his son, Frederick, to complete the job. The satisfactory completion of the project provided the company with the privilege of using Big Ben’s image in any future advertising.

It may be somewhat misleading to add ‘Big Ben’ after the words ‘The Great Westminster Clock’ as Big Ben is neither the name of the clock nor the tower, but a nickname given to the bell within the tower. And certainly, the word “bell” perhaps underplays this device, since Big Ben weights 13½ tons!

The tower building was completed in 1859 although it was newsworthy well before that. The London correspondent of the Glasgow Herald on October 24, 1856 wrote:

“Yesterday we had a real spectacle - that of the great bell, "Big Ben of Westminster," moving in procession to the new Palace. "Big Ben," so named after Sir Benjamin Hall was disembarked at a wharf on the south side of the river, and thence drawn by sixteen horses in proud triumph over Westminster Bridge, which trembled beneath the unaccustomed load. An immense crowd was assembled to witness the progress of the new bell, which, in point of size and material, throws all our old much-famed bells into the shade. The accident which had befallen it when first shipped for London gave zest to the curiosity of the onlookers, and as some alarmists had predicted that its enormous weight would never get over crazy Westminster Bridge in safety, a little excitement attended its passage - just enough to give a sensation of pleasure and enjoyment when the feat was accomplished. With considerable difficulty "Big Ben" was borne to the clock tower, where it was suspended from a temporary but massive framework, for the purpose of being tested. A few blows brought forth its fine clear tones, and proved it to be without crack or flaw, and it now rests securely on a base of strong timbers till the builder’s task of suspending it in its place in the tower can he accomplished.”

It is unclear what accident is referred to in the above article although there was a further accident in 1857 reported by the Brighton Gazette of October 29, 1857, titled, ACCIDENT HAS OCCURRED TO BIG BEN. “In the new palace of Westminster, for some time past, it has been the custom to toll the bell for a short time at one o’clock on Saturdays. On Saturday the proceeding was commenced as usual, and after the hammer had struck for the third time, it was found that the sound was not the old familiar E natural, but a cracked and uncertain sound. The crack in the bell rises perpendicularly from the rim, or lower lip, to about half-way the side, and it is directly opposite to the spot on which the bell was struck by the large hammer.”

It may be commonly known that Big Ben cracked early in the life of the tower although, it is doubtful that a second crack is known. This Oxford Journal of October 8, 1859, reports:

“BIG BEN AGAIN CRACKED. (From The Times.) On Saturday, the great bell of Westminster sounded for the last time, and while in the very act of striking, Big Ben became dumb forever. At the present moment the bell is even more hopelessly cracked than its ill-fated predecessor, and like him, too, must be broken up and recast before the great clock of the metropolis can again record the flight of time. Recasting is a word which is soon said; but such a weary deal has to be done before Ben's mutilated fragments find their way to the melting pot, and still more before the renovated mass is again restored to its lofty dwelling, that, even taking a sanguine view of things, we think at the least a clear twelvemonth must elapse before the voice of the great bell can again be heard booming over the great province of houses in which it is to regulate the laws of time. The first bell was cast by the Messrs. Warner, and on trial proved so much heavier than was expected that a clapper of neatly double the weight than originally intended had to be used to elicit the sound. Under the infliction of repeated trials, the bell broke in palace-yard, and most fortunately before it had been raised to its resting place, amid the iron beams and girders of the bell-chamber in the summit of the clock-tower. It was accordingly broken up and recast, showing, during the first-named process, that the first casting had been a failure. To Messrs. Mears, of Whitechapel, the recasting of the second bell was entrusted, Messrs. Warner declining to undertake it on the terms offered by the Board of Works. The second bell, which has just cracked, was a magnificent casting. Its weight, size, and tone were exactly what was required, and Mr. Denison most properly certified to the completeness of the largest and finest bell ever cast in England. This was, as usual, tested, and at last, after considerable delay and trouble, hoisted to its place above the clock room.”

Bob Teevan is an eclectic collector of vintage postcards. He enjoys digging into the people and places related to his cards and thinks of a postcard as a window into history. He has recently begun a Facebook group, “People and Places behind Vintage Picture Postcards” that has informal and fun discussions in respect of the people and places behind postcards. He is also keen to keep the fun in the collecting hobby. He lives in Scotland.
PrevPreviousTHE BROMO-SELTZER TOWER
NextThe Poland Spring HouseNext
3 Comments
Oldest
Newest Most Voted
Inline Feedbacks
View all comments
Richard Lauder

Great article… the old newspapers really bring it back alive

I never realized Big Ben was named after a specific person. Hall held the impressive-sounding title of First Commissioner of Works under Lord Palmerston, the British prime minister so admired by barfly Barney Gumble on The Simpsons.