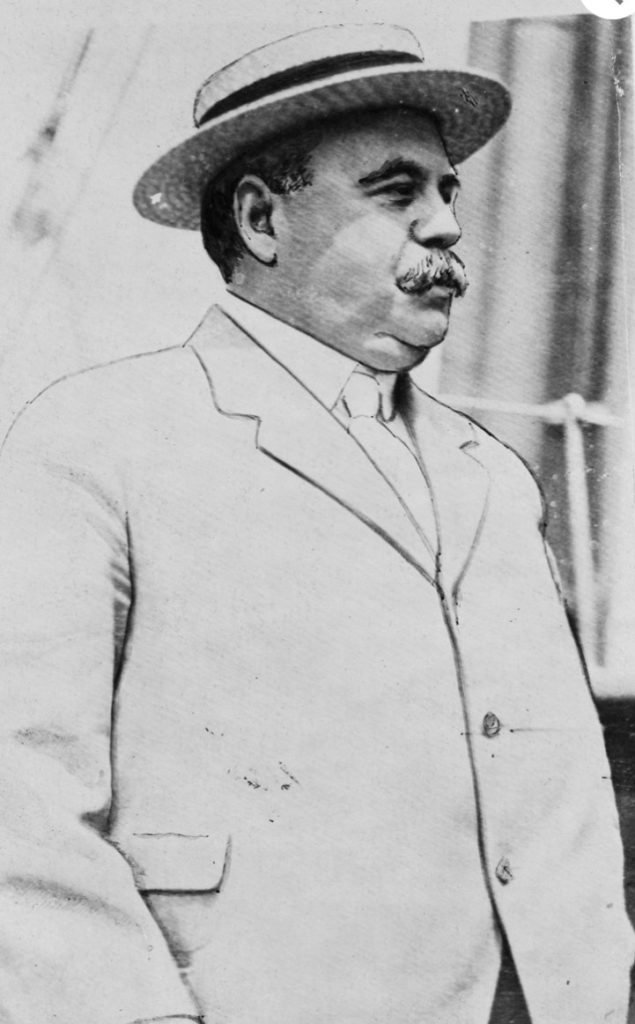 After listening to his customers complain for seven years, Emerson invented a patent medicine to cure their headaches, stomachaches, and nervousness. He combined sodium-bromide (a tranquilizer), acetanilide (a precursor of acetaminophen), and caffeine into a powder and patented it as Bromo-Seltzer. His customers mixed his powder in water, watched it fizz, then drank it. Emerson’s marketing genius and his customers, who soon discovered that Bromo-Seltzer also relieved hangovers, made the patent medicine a bestseller. Bromo-Seltzer made the captain a multimillionaire; but it also led to addiction, overdose, and murder.

With his newfound wealth, Emerson built a mansion overlooking Druid Hill Park and acquired an Italian-American mistress. In 1900 he secretly took her to Italy to visit her family. In Florence, the captain was impressed by the Palazzo Vecchio’s clock tower. Eleven years later, it inspired Emerson’s greatest advertising motif – Baltimore’s Bromo-Seltzer tower. 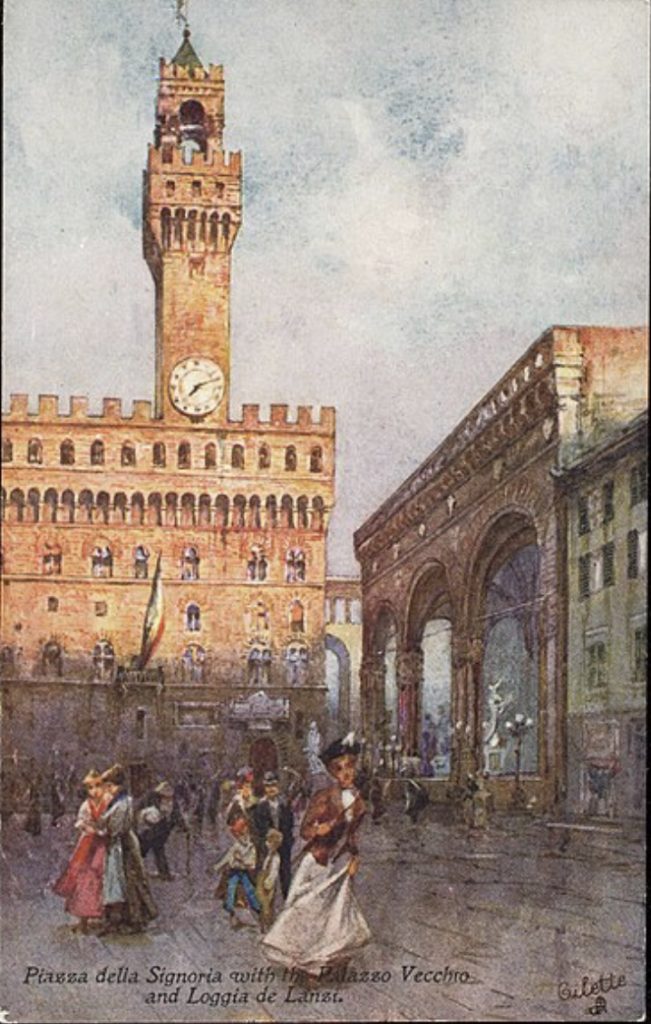 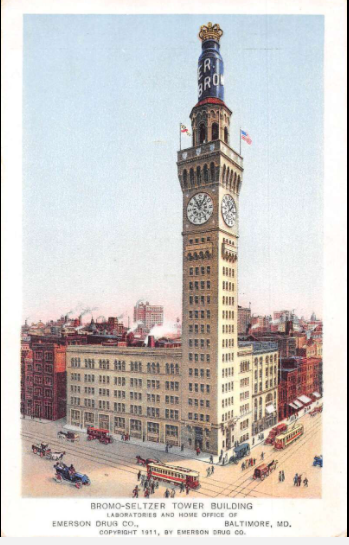 In 1911, Emerson added the Bromo Seltzer tower to his factory. At 357 feet, the tower was the tallest building in Baltimore. It included the world’s largest gravity clock and a 51-foot-tall revolving replica of a Bromo-Seltzer bottle. The huge cobalt blue bottle contained 596 electric lights which could be seen from 20 miles away. At night, the blue light was so bright that it guided ships into Baltimore Harbor from the Chesapeake Bay.

[Amazing as the tower was, it drew complaints about the unease people experienced in trying to “read the time.” The primary reason was the substitution of the letters in Bromo-Seltzer for the numbers of the clock. B replace 10, R replaced 11, to the second O replacing 2, then S replaced 9, E replaced 8, and so on. Apparently few could tell that B:E was twenty to ten o’clock.]

The completion of the Bromo-Seltzer tower also marked the downfall of Emerson’s marriage. That same year, Emerson sued his wife for divorce after thirty years of marriage following a public argument in a hotel. He charged her with adultery. Emilie countersued him and a public scandal ensued. Emerson lost the house in their divorce settlement but retained ownership of the adjoining gardens.

Two months after his divorce, Emerson married his daughter’s best friend, who was eighteen years younger than his ex-wife. He destroyed the gardens, building in their place the eight-story Emersonian Apartments, a “spite house” intentionally designed to block his wife’s view of the park. Emerson and his new wife moved into the penthouse so they could always “look down on his ex-wife.”

Over the next twenty years, the vast income provided by Bromo-Seltzer enabled Captain Emerson to live the life of a wealthy socialite while weathering many scandals.

Scandal dogged Captain Emerson and his patent medicine, too. In 1898, would be murderer Roland Molineux replaced the powder in a Bromo-Seltzer bottle with cyanide. He sent the bottle in a package to his intended victim, Henry Cornish. A visiting relative who had a headache took a dose from Mr. Cornish‘s bottle, believing its contents to be Bromo-Seltzer. She died in agony. Molineux was convicted and imprisoned, but his conviction was overturned. This became the most famous product tampering case of the 19th century.

In 1906, the Pure Food and Drug Act required the Emerson Drug Company to make public the ingredients in Bromo-Seltzer on the label of every bottle. Emerson complied but refused to change the formula. That year, the American Medical Association published multiple articles about the toxicity of Bromo-Seltzer. By 1928, the medical community recognized that Bromo-Seltzer could be addictive.

Some of Emerson’s best customers were alcoholics who used Bromo-Seltzer as a hangover remedy. They found that Bromo-Seltzer, when consumed in large amounts, had the same tranquilizing effect as alcohol. Doctors began reporting that patients with alcoholism sometimes drank Bromo-Seltzer when alcohol was not available. Just like alcohol, Bromo-Seltzer in large doses could result in confusion, impotence, aggression, hallucinations, and death. Fatal Bromo-Seltzer overdoses continued to occur into the 1960s. But because Bromo-Seltzer was otherwise safe when used appropriately, it remained on the market.

Isaac Emerson left a fortune of $20 million when he died in 1931. That same year, Alka-Seltzer appeared in tablet form. Fortunately, Emerson did not live to see it gradually replace Bromo-Seltzer.

From 1943 to 1948, the Emerson Drug Company was subjected to Federal Trade Commission hearings alleging false advertising. The FTC dismissed the complaint after requiring the company to add the words “Follow the label – avoid excessive use” on every bottle of Bromo-Seltzer.

Ten years later, the failing Emerson Drug Company was sold to the Warner-Lambert Pharmaceutical Company. Emerson’s factory was demolished in 1969, but the famous Bromo-Seltzer tower was preserved.

Bromo-Seltzer had another setback in 1975 when the Food and Drug Administration took all bromides off the market. Warner-Lambert created a safer version of Bromo-Seltzer using baking soda and acetaminophen. A final blow to the popularity of Bromo-Seltzer came from Alka-Seltzer’s animated mascot “Speedy” and his catchy jingle “plop, plop, fizz, fizz, oh what a relief it is.”

Bromo-Seltzer disappeared from the American market, but its iconic tower remained. Twenty-five years after it was built the tower began to show its age. Cracks were found in the tower, caused by the vibrations of the revolving blue bottle atop it. In 1936, the iconic blue bottle that guided ships into port was removed to save the tower.

Today, the 112-year-old building is home to the Bromo-Seltzer Museum and studios of many local artists.

Emerson’s tower changed the Baltimore skyline forever, it lost its spinning blue bottle, but it remains a symbol of civic pride in the hearts of Baltimoreans.

Anne Ross enjoys researching and writing about the postcards she collects because it enables her to finally make use of the things she learned in art history class! She collects Raphael Tuck and Kohn Brothers postcards from the UK and Austria. Anne lives in California.
PrevPreviousMonday, July 13, 1914
NextBig BenNext
8 Comments
Oldest
Newest Most Voted
Inline Feedbacks
View all comments
MARY SCHAEFER

What a juicy, scandal-filled article. Loved it!
“Speedy” the Alka-Seltzer mascot is forever embedded in my mind and will be running through my head all day.
Beautiful card of the Bromo Seltzer wagon. A beautiful team of dappled greys pulling it with lovely harness.
Thank you.

Thanks for your comment. That postcard of the delivery wagon was one of the first cards I bought- due to the smart team of greys! I often walked by the Bromo- Seltzer tower as a university student without knowing anything about Capt Emerson. The clock tower was useful for many students worried about getting to class on time.

Great story, would make a fun mini-series. Born in Baltimore and lived near Druid Park Hill when it was no longer playground of the rich. Sadly false Ang exaggerated claims for miracle remedies still proliferate.

Great story! I did not know the story behind the tower. I just looked for the Mansion and the apartments building.. still there!! Thanks

Great article. Love the back history and touch of scandal.

Now I’m wondering if Roland Molineux inspired the still-unknown miscreant who laced Tylenol capsules with cyanide in 1982 in Chicago and was thus indirectly responsible for all the subsequent hours of struggles to open tamper-proof packaging.

No doubt your followers enjoy a scandalized version of The Captain’s tale. Knowing the family I’d say your version is tad bit embellished, though as the Aussies say, tall poppies are easy pickin.