Part Two in a Series

Prior to 1956 – before the Dwight D. Eisenhower National System of Interstate and Defense Highways became a reality – a trip to Florida was a long and mostly tedious drive from anywhere in America. The Interstate roads of today have eased the length of time and the hospitality industry has improved the ease of travel, but no one has yet invented a system that shortens the distance.

If you went mostly south toward Florida, remember how the excitement of crossing the St. Johns River changed your attitude about travel? You were weary, thirsty and hungry, and you likely needed a restroom, but you were happy to be in Florida. However, it never entered your thoughts that – if you were headed to Key West – you had another eleven hours of driving ahead of you. (Today the improved highways make it an 8½ hours drive if you have a car with a gas tank large enough to complete the 503 miles.) A trip to Florida from anywhere west wasn’t much different.

The Florida Lighthouse Association, found in Saint Augustine, Florida, offers users of their website a beautifully detailed map of lighthouses in Florida. If it is your intention to visit all of Florida’s lighthouses, there is a highly recommended routine that suggests driving south along the Atlantic (eastern) Coast to Key West, then on the return north enjoy the more leisurely drive that awaits you on the Gulf (western) Coast. It will be a trip of more than 1,360 miles, but you will never have to drive more than 140 miles without a chance to stop at one of Florida’s 47 lighthouses.

Amelia Island Lighthouse was constructed in 1820 on the south end of Little Cumberland Island, Georgia. For reasons unknown, in 1838 it was completely dismantled. Every brick was loaded on barges and floated across the mouth of St. Johns River – less than three miles – and rebuilt on Amelia Island near Fernandina Beach. It became Florida’s first lighthouse.

Seventy-six miles south on Interstate 95 to Saint Augustine, Florida – the oldest continually inhabited community in the “lower-48.” Just a mile or so south is another of Florida’s beautiful lighthouses At 165 feet, it is painted in a black, counter-clockwise swirl on a white background.

In the opinion of many, St. Augustine is among the finest cities in the state. There are many five-star hotels and restaurants (one of which is Columbia Restaurant on St. George Street where the best Spanish food in America is brought to you in a true Castellon/Cuban tradition of grace, beauty, and charm.) 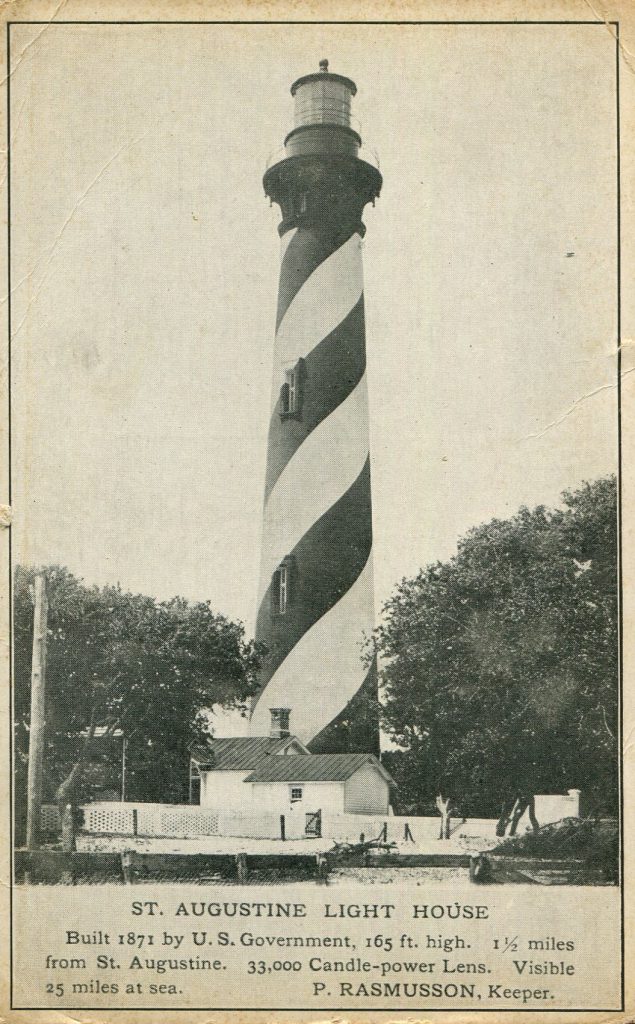 Daytona Beach has a lighthouse loved by members of the NASCAR community, but it has a minor identity problem. Over the years, one collector familiar with lighthouse cards has amassed twenty-seven different cards of what she calls the lighthouse at Daytona Beach. The four cards below present you with some variations. 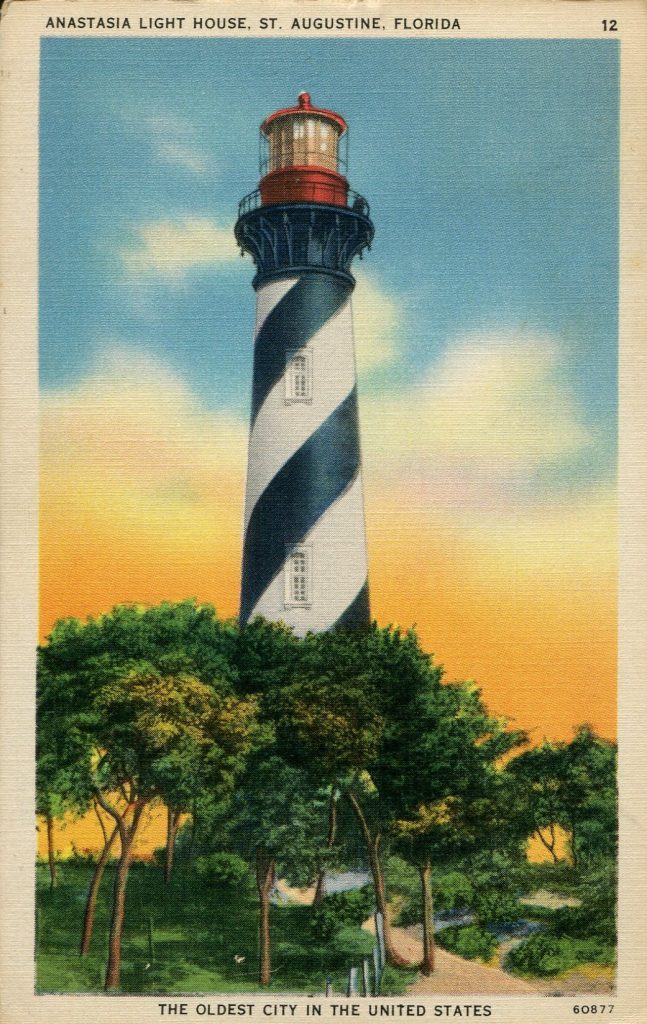 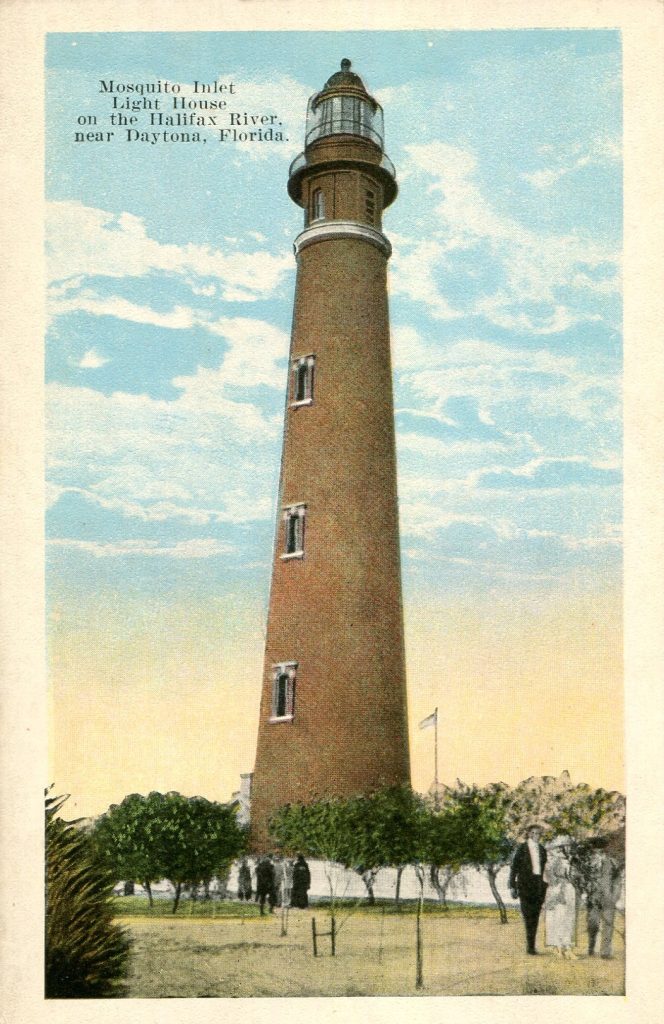 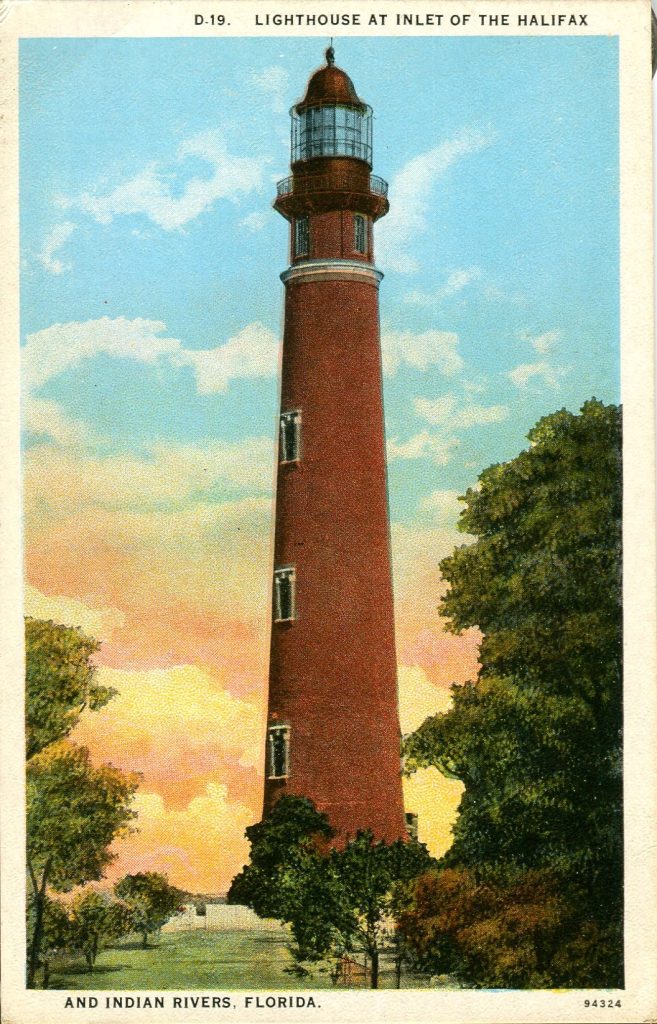 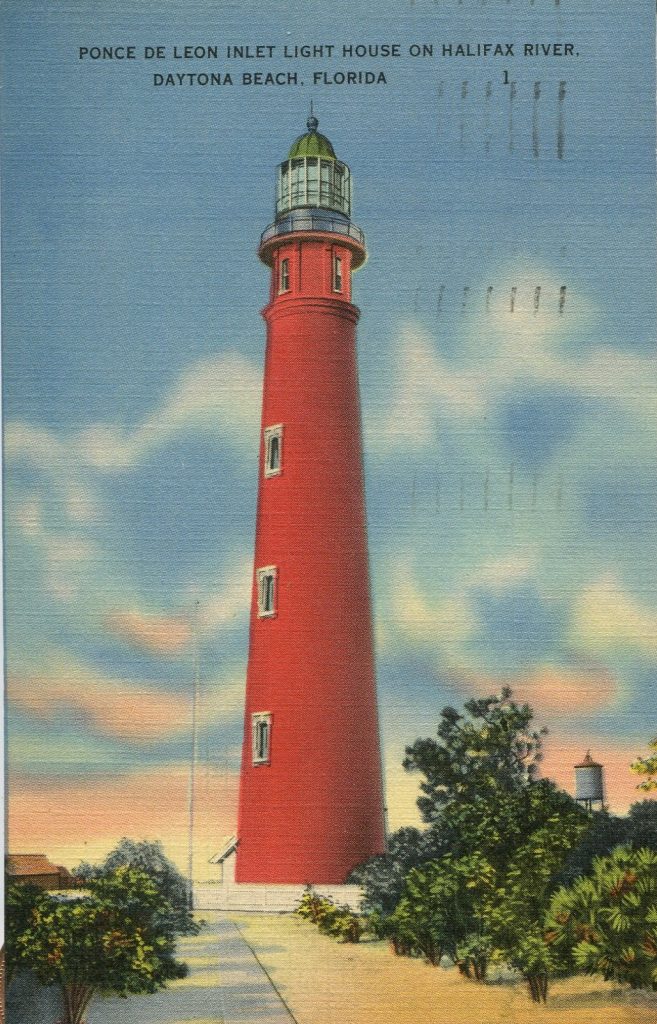 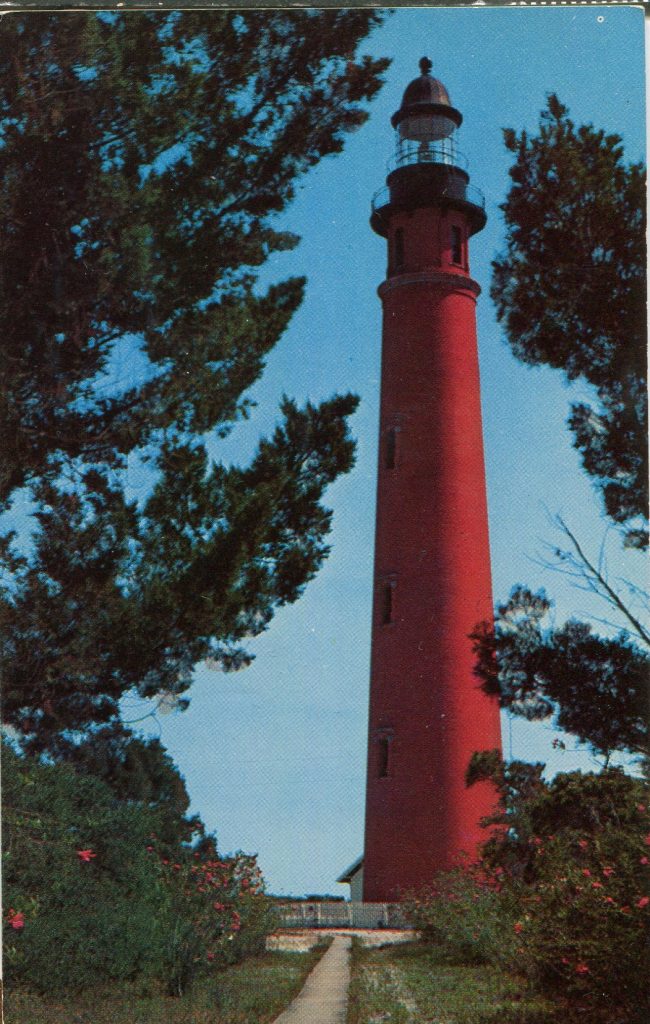 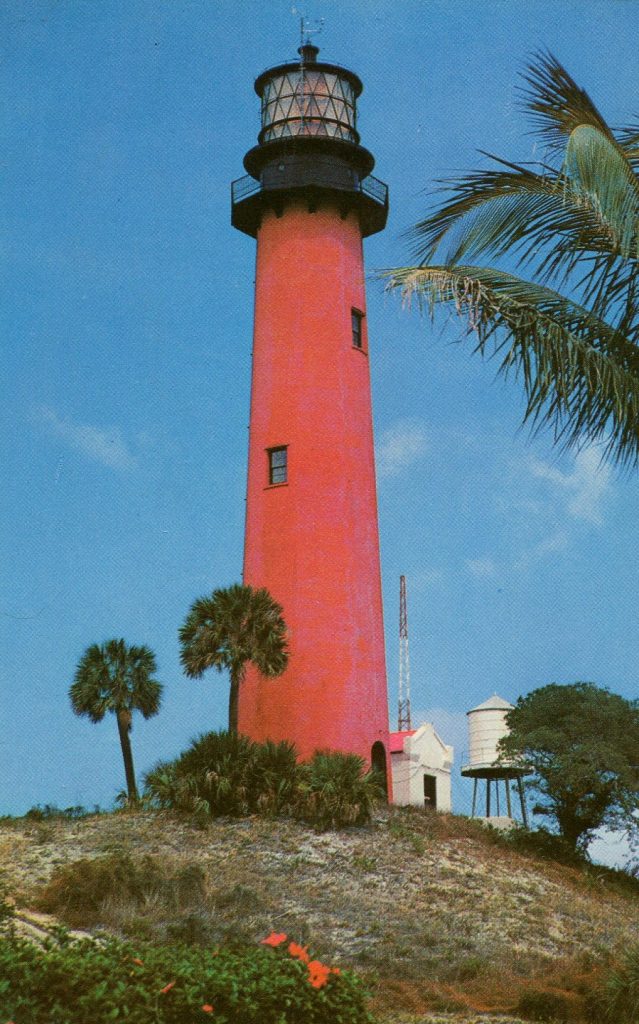 Before we go on to our next stop, lets pass Cape Canaveral and go to Jupiter Island, near Fort Lauderdale. The site selected in 1853 for the Jupiter Lighthouse was to be a mid-point between Canaveral and Hillsboro.

A young United States Army Lieutenant designed Jupiter Lighthouse for the Bureau of Topographical Engineers. Some years later at Gettysburg, Pennsylvania, General George Gordon Meade earned his notoriety through another event, but Jupiter Inlet lighthouse was among his cherished accomplishments. 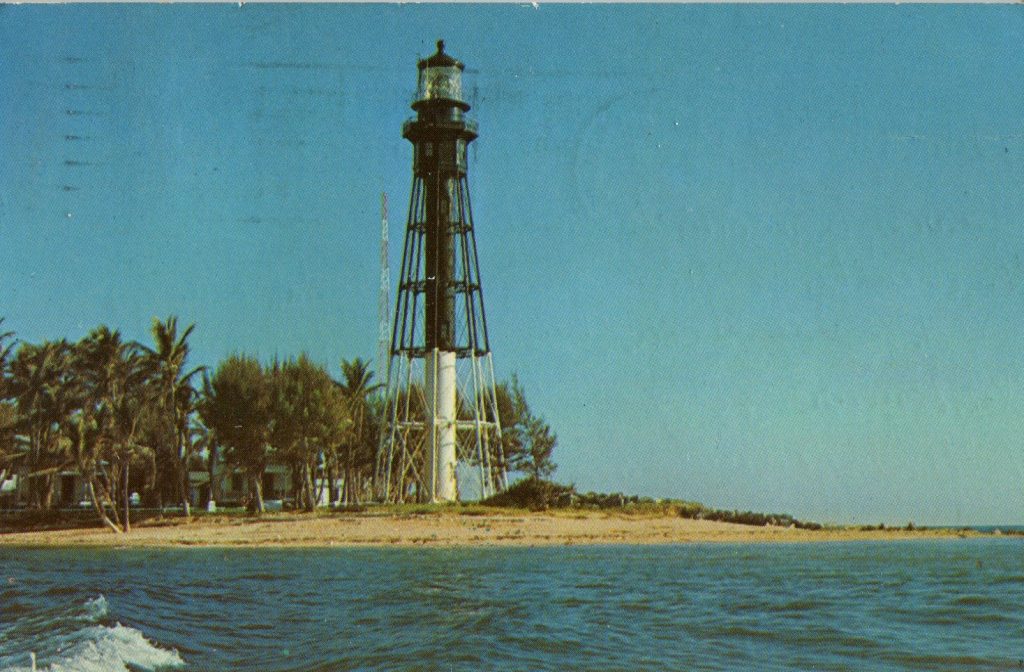 Hillsboro Lighthouse is unlike most we will visit, since it is an octagonal skeletal structure with an inner cylinder.

Hillsboro Light was granted an appropriation of $45,000 in 1902, but it had been recognized as a navigational hazard since 1855. The first request for a light at that location was made in 1884 and was rejected for seventeen years.

The story of the acreage needed for the light is long and convoluted but in the end the government paid $150 for three acres on the edge of the inlet. It was land that was purchased by a New Jersey resident for seventy cents ($0.70) per acre only a few years before.

The most bizarre tale associated with Hillsboro light surfaced soon after construction. In the summer of 1907, a series of unexplained fires were reported in the Everglades. Investigations launched in all parts of south Florida, determined that the Hillsboro Light was the blame. The lens focused the daytime sunlight into the wetlands in the west. The intense buildup of heat where the lens was aimed would ignite the dry grasses and the fires would burn for days. Smoke pollution was a constant problem. The solution was a landward faced baffle that protected the wetlands as well as the residents in the area who disliked the bright navigation beam flashing across their bedroom walls late at night.

This tour ends in forty-nine miles at the lighthouse on Cape Florida. At the southern tip of Key Biscayne Island sits a 95-foot tall, brick tower built on a coral reef in 1825. It is painted bright white and serves as a beacon as much in daytime as it does at night. 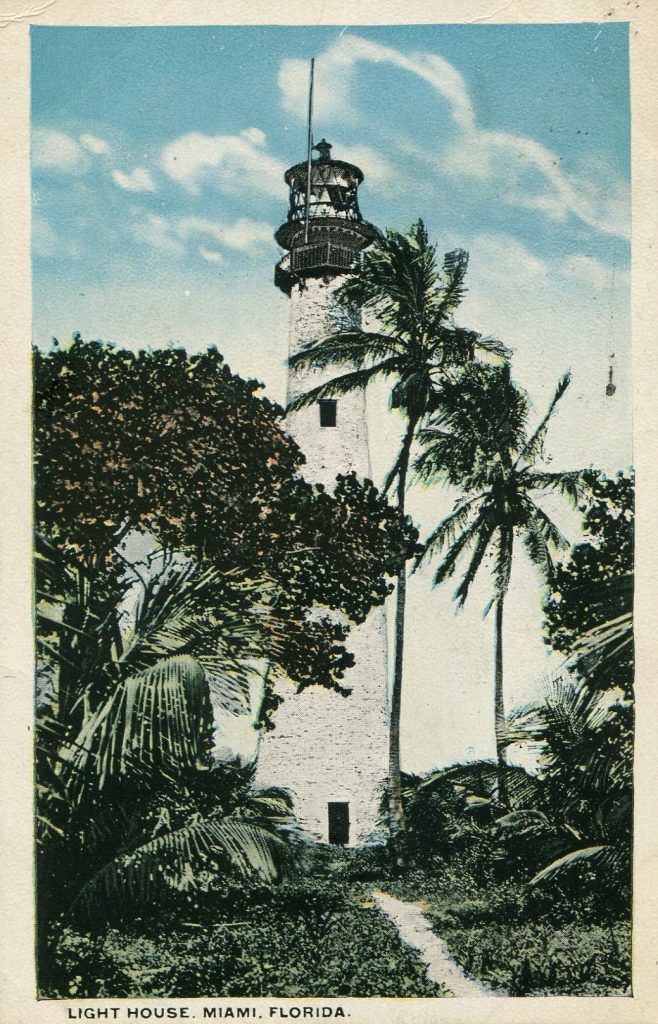 Cape Florida owns a dismal place in Florida’s social history that won’t be mentioned here. If you’re interested explore the term “Saltwater Railroad.” Otherwise, Cape Florida lighthouse is surely among the very few lighthouses that has been attacked during a war. In 1835 when the second Seminole War started the Seminole warriors attacked the settlers of south Florida and massacred the Cooley family on their farm near what later became Fort Lauderdale.

When news of the attack reached other settlers, those along the Miami River moved to the lighthouse for safety but soon after went on to Key West. The Navy arrived at Key Biscayne some weeks later and fortified the tower’s windows and door and left only an assistant keeper and his aid in charge.

Only days later the attack by the Seminoles forced the keeper and his aide into the tower. Rifle fire was exchanged, but at that time no serious injuries were sustained. After dark on that same day the raiders set fire to the lighthouse door and boarded up windows. The battle began anew. In the confusion rifle shot hit the lamp oil tanks on the first floor and flames engulfed the interior.

It must have seemed that hell was raining down on Cape Florida that day. The keeper was hit three times by rifle shot, he was trapped on the ledge outside the lamp room, but through some heroic acts by Navy sailors from a ship offshore, the keeper – whose name was John W. B. Thompson lived to tell his story in his hometown of Charleston, South Carolina, to anyone who would listen.

The Staff of Postcard History offers this article for your enjoyment. It is a combined effort of many: our publisher, editor, webmaster and collectors/contributors far and wide. Please use the COMMENTS feature below to let us know how we're doing.
PrevPreviousThe Poland Spring House
NextWe’ll Go Some Place and TANGO!Next
4 Comments
Oldest
Newest Most Voted
Inline Feedbacks
View all comments
Bob Kozak

The story of the Hillsboro Light’s interruption of sleep reminded me of the tales told by people who live near airports and have to contend with the roar of jet engines around the clock.

Ponce De Leon inlet lighthouse is a favorite. Been there a few times. Worth the visit.

I have been to the top of the St. Augustine Lighthouse. It was quite a climb!!

Another Great article about our Lighthouses. They’re becoming a lost part of our Country’s History and we can’t let that happen. There is so much info you can write about when it comes to Lighthouses that you would wind up with writing a book. Great Job!