We’ll Go Some Place and TANGO!

One of the standard release Christmas movies in 1992 was The Scent of a Woman. It was a blockbuster. New Year’s Day came and went, but when the routine of daily life returned to normal in the early weeks of January a very strange uptick in dance-school attendance of young couples occurred. Everyone wanted to dance the Tango!

The cast of The Scent of a Woman, based on a twenty-year-old Italian novel, featured Al Pacino, Chris O’Donnel, Philip Seymour Hoffman and Gabrielle Anwar. Pacino’s character was Lieutenant Colonel (ret.) Frank Slade. Frank is a cantankerous sort who is mired in a self-inflicted crisis over the recent loss of his sight. Chris O’Donnel, plays Charlie Simms, a young college student, hired by Frank’s family to see to Frank’s needs while they are away. Gabrielle Anwar plays Donna.

As O’Donnel’s character, Charlie, comes into play, Frank decides he needs to make a trip into New York City. Frank wants the trip to be a therapeutic fling that will help him decide what his future will be – life as a blind man or suicide.

There is a scene in which Frank dances the tango with Donna in the ballroom of New York City’s Pierre Hotel. It was far and away the sexiest dance scene ever recorded on film.

The Tango is a social dance that began in the mid-1880s in the impoverished port cities in the borderlands between Argentina and Uruguay. In reality it combines elements of African, Spanish, and Cuban dance with an emphatic nod to the Argentinean Milonga, but much slower. The tango was often danced in brothels and bars until the early twentieth century when it made an appearance in New York and the capital cities of western Europe in the winter of 1910-1911.

Rudolph Valentino was a celebrity-enthusiast of the tango. One of his first jobs was as a professional (at $50/week) dancer of the tango in a New York City nightclub. The reaction to the tango, in places other than South America, were so fanatic that as new dancers joined the throngs, the music slowed and more restrained, it became more respectable – even in Argentina.

The music of the tango is measured in half and quarter notes played on a solo guitar, (but also in guitar duos), or by an ensemble comprised of two violins, a flute, a solo or pair of double-basses, a piano and at least two or three bandoneons (a concertina like accordion).

Dance on postcards became a popular theme early in the golden age. Samson Brothers of New York was one publisher that produced at least two sets of Tango cards. The cards are not of the best quality, the art is simplistic, and some cards have been found that exhibit very poor print-registration. The lyric captions are clumsy and the rhymes are contrived, but generally the cards are pleasing and serve their intended purpose – an invitation to go dancing.

The currently known cards are in two six-card sets, printed on marbled paper. Postcard history has learned that one set appeared in 1919, the other set’s publication date is unknown. 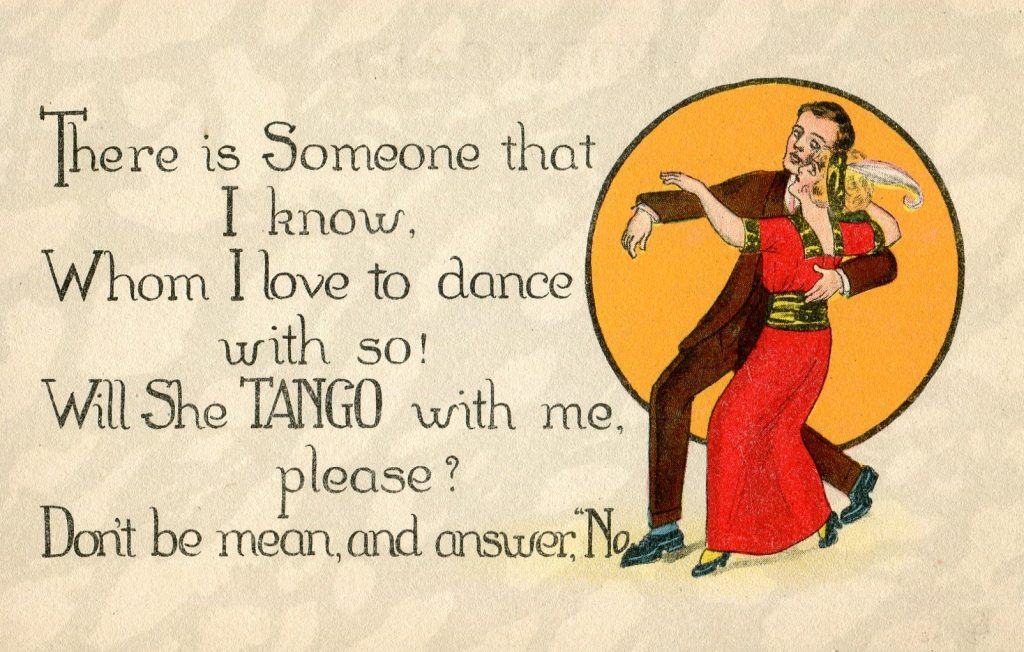 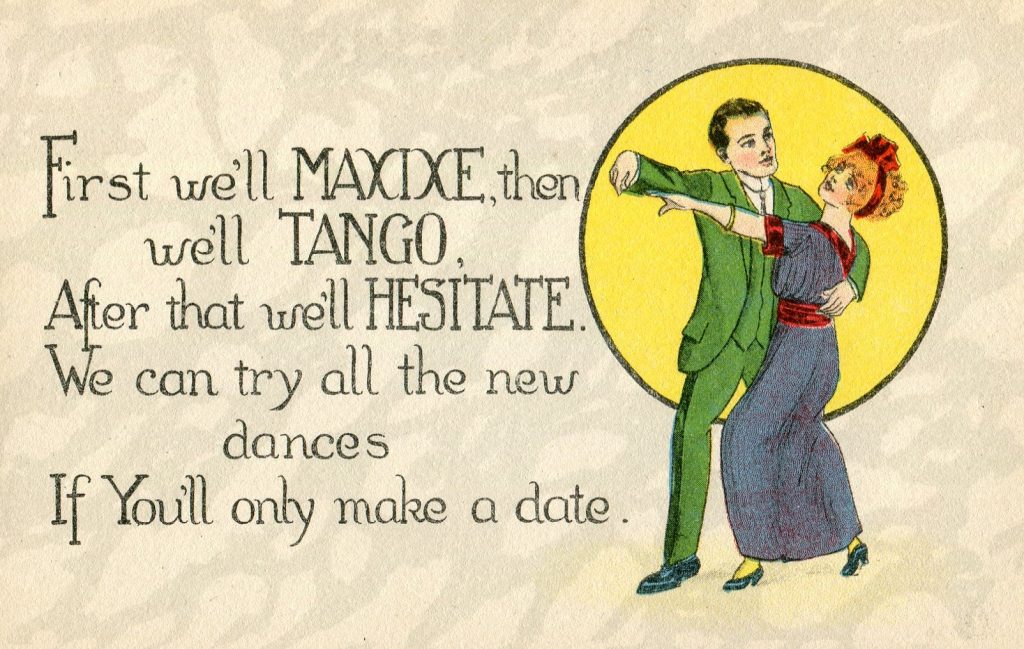 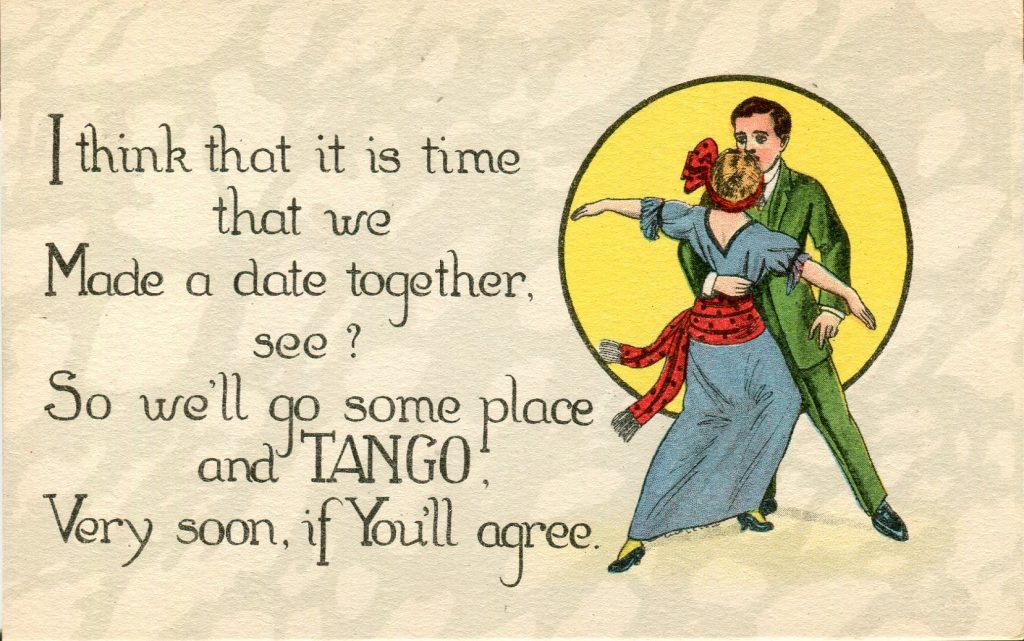 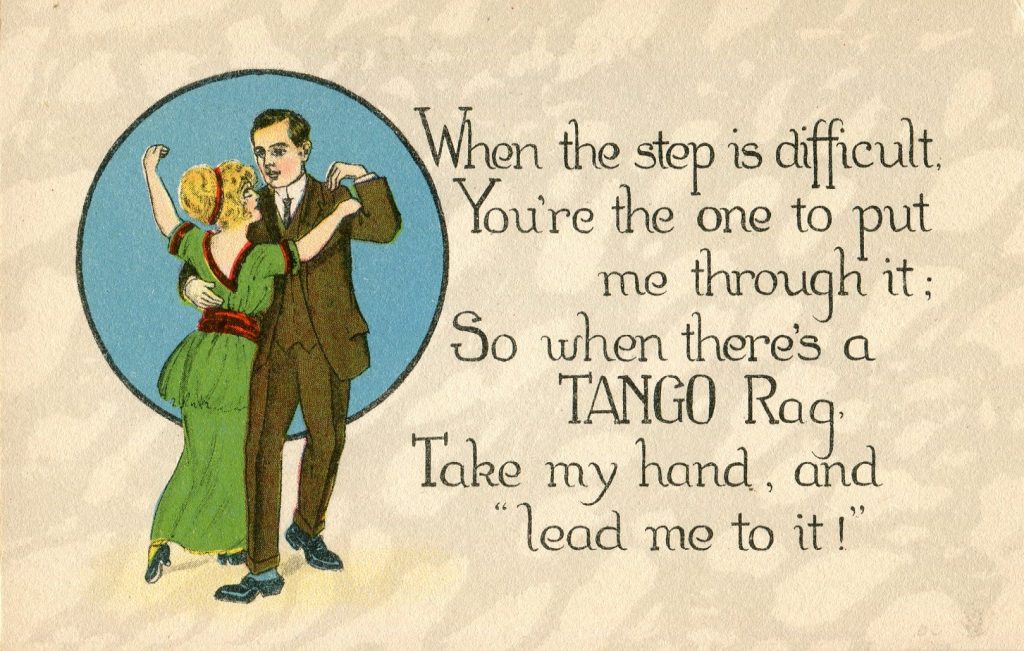 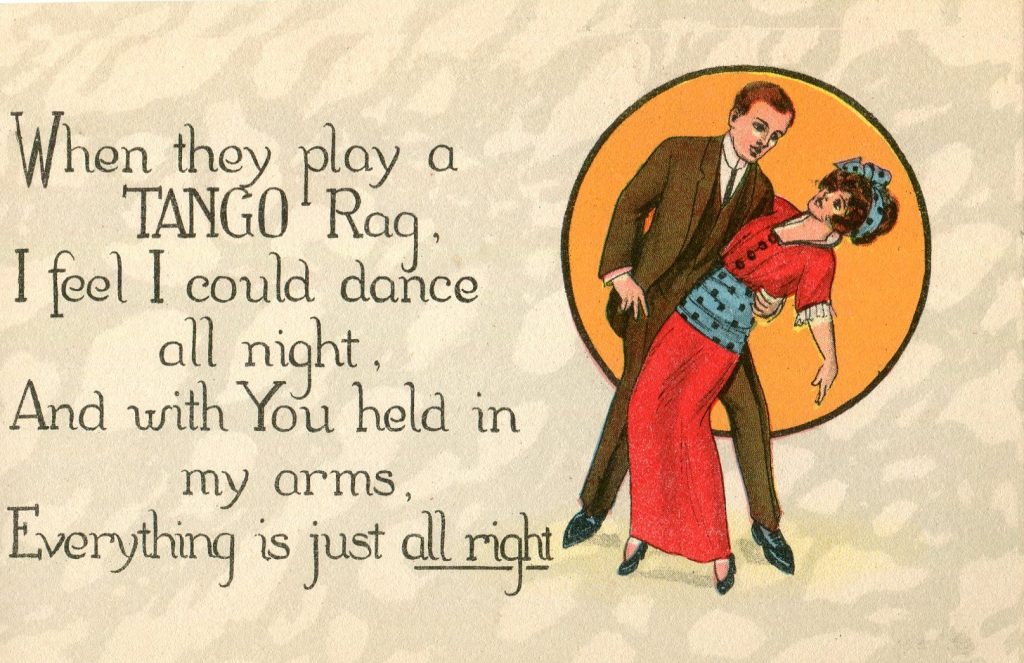 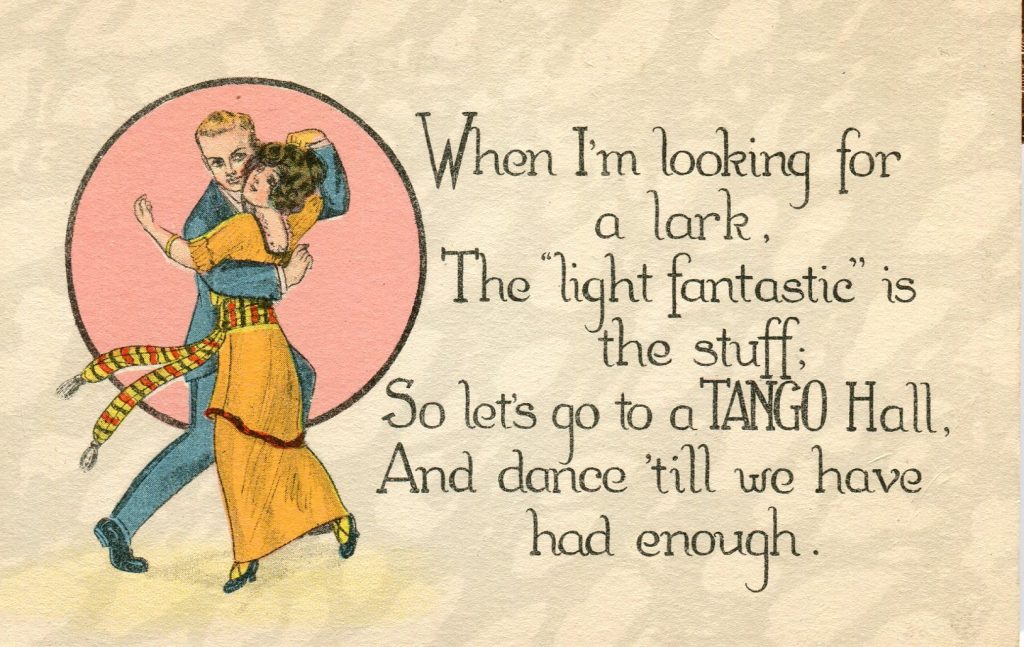 The Staff of Postcard History offers this article for your enjoyment. It is a combined effort of many: our publisher, editor, webmaster and collectors/contributors far and wide. Please use the COMMENTS feature below to let us know how we're doing.
PrevPreviousFlorida Lighthouses – Part Two in a Series
NextThe World’s Champion Cotton-Picking ContestNext
2 Comments
Oldest
Newest Most Voted
Inline Feedbacks
View all comments
irene herz

Interesting that they call it a “tango rag”, combining two genres that were hot then. Amazing to think of our living, breathing, dancing forebears.