Haussner’s Restaurant of Baltimore, Maryland was famous for three things: good German food, there collection of oil paintings, and a huge ball of string. The owners, William Henry Haussner (1894-1963) and his wife Frances Wilke Haussner (1909-2000), loved both fine dining and fine art. By combining their interests, the Haussners created a unique niche in the Baltimore restaurant business.

The walls of their unconventional restaurant were covered with museum-quality paintings. In the 1960s and ‘70s, the Haussners produced a series of postcards, matchbooks, and menus showcasing the paintings that hung in their restaurant. The Haussner’s knack for marketing and their culinary talents made their restaurant one of Baltimore’s most beloved landmarks for seventy-three years.

William emigrated to America from Bavaria, Germany, where he had been a master chef. Legend has it that he once cooked for Kaiser Wilhelm. Frances was also from Germany where she was orphaned at age thirteen, then raised and educated by nuns in a convent. Both were devout Catholics.

The restaurant opened in 1926 in Highlandtown, an east-central Baltimore neighborhood with a large German Catholic population.

In 1939, the Haussners began buying paintings to display in their restaurant. Early in the project they self-imposed a limit of $3,000 per painting. Mrs. Haussner had a talent for finding high-quality art and negotiating purchases from famous collectors the likes of J. P. Morgan and Cornelius Vanderbilt. The first painting the couple bought was The Venetian Flower Vendor (1895) by Eugene Van Blaas.

Due to its art collection and the high quality of the food served, Haussner’s Restaurant had a reputation as a classy establishment. Mrs. Haussner, who watched “the front of the house” was a warm and friendly person who made everyone feel like family.

On Saturdays, crowds lined the sidewalks waiting for seats. Priests were frequently pulled out  of the line and given priority seating with respect for their service to the community. Regulars included Governor William Donald Shaefer, H. L. Mencken, and Emmett Kelly. The restaurant served 1,500 to 1,700 guests a night and 400,000 customers a year.

Renowned for its crabcakes and strawberry pie, there were also traditional German dishes on the menu. And, although it is an Austrian dish, wienerschnitzel was a perpetual favorite. No one who came to eat at Haussner’s seemed to care about calories. It was a true comfort food destination.

Baltimore’s best German American restaurant was just as famous for an enormous ball of string as for its food. Mrs. Haussner insisted that nothing be wasted. The waitresses saved old napkin strings and tied them together. The resulting string ball was four feet in diameter and weighed 850 pounds. Many guests took photos of their children sitting on top of the giant ball of napkin strings.

Mr. Haussner died in 1963, but his wife Frances kept the restaurant going until 1999. In the last few weeks before the restaurant closed, people waited in line for two hours for one final meal. Many took photos and videos; others cried. Within a year, Mrs. Haussner died. Her dream of selling the restaurant to a local culinary school never materialized.

Sadly, the building sat abandoned until 2006. It was demolished ten years later and a modern cubist apartment building was built in its place. The new owners named the complex Highland Haus in homage to the Haussners. Architectural items salvaged from the beloved restaurant now decorate the apartment lounge.

Sotheby’s auctioned the Haussner’s art in 1999. The hammer price exceeded ten-million dollars. The auction was attended by a sizable crowd, including rock stars Jon Bon Jovi and Rod Stewart.

The paintings featured on Haussner’s postcards included Girl with Two Kittens by Emile Munier, originally purchased for $3,000, sold for $180,000. Arthur John Elsey’s painting of little girl with a St. Bernard, sold for $610,000. The first painting purchased by the Haussner’s, Eugene deBlasse’s Venetian Flower Seller, sold for a record $730,000.

The lesser of the paintings were sold in a local auction. Proceeds totaled two million dollars. The ball of string sold for $8,000.

For years, art collectors were aware that the restaurant collection contained many Victorian and Edwardian paintings that Mrs. Haussner shrewdly bought when they were out of fashion. When she died, those paintings had regained their popularity and the estate profited handsomely.

There were two distinct, but not distant, periods in which postcards of the Haussner Collection came to be, the first being circa 1949 when Dexter Press published an unknown number of cards (perhaps six to ten) for Haussner. The Dexter cards had their signature rounded corners and the address side included a map in the message space of the card.

The second postcard era came is the mid-1950s (likely 1956), when at least twelve paintings were selected to be reproduced on postcards printed in the newly perfected “mirro-krome” process by the H. S. Crocker Company of Baltimore. Mirro-Krome was an early high gloss photo finished that was long-thought to be an industrial secret, since Crocker’s claim that the images would never fade seemed to be true. 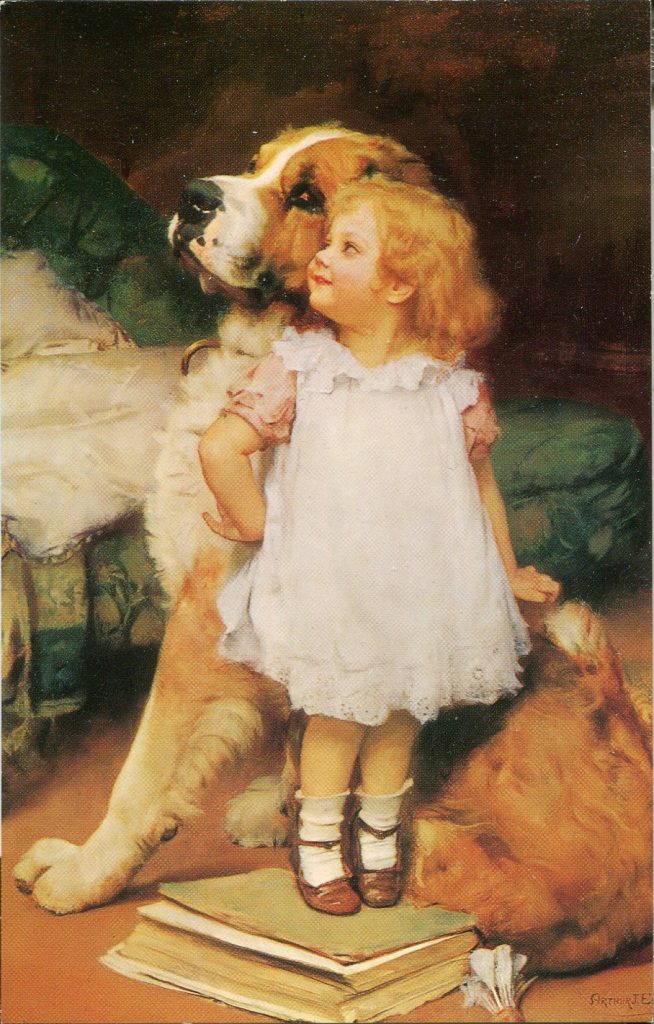 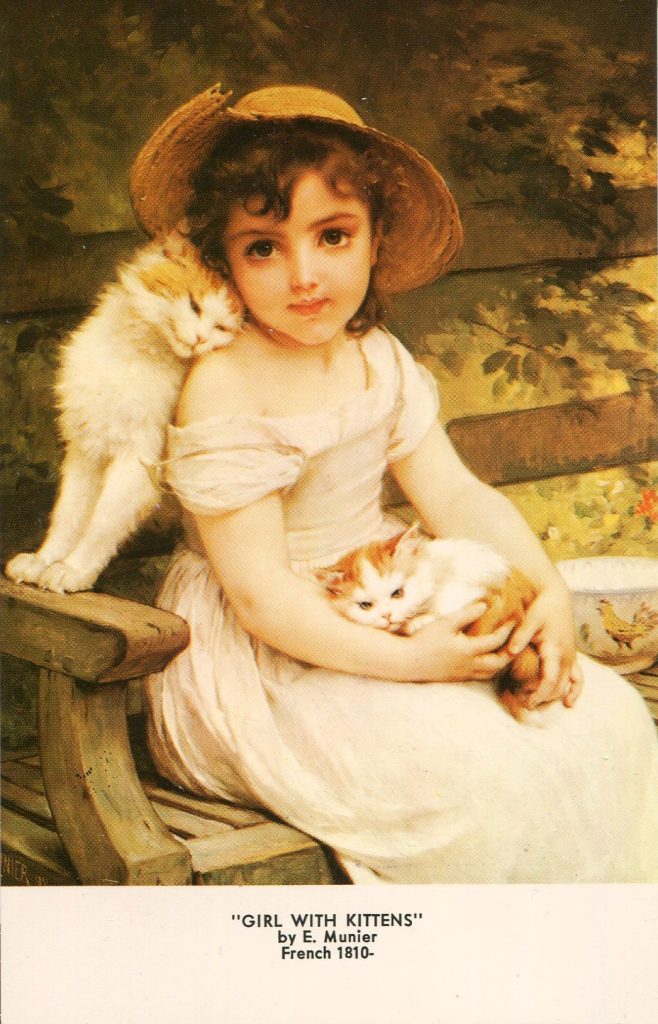 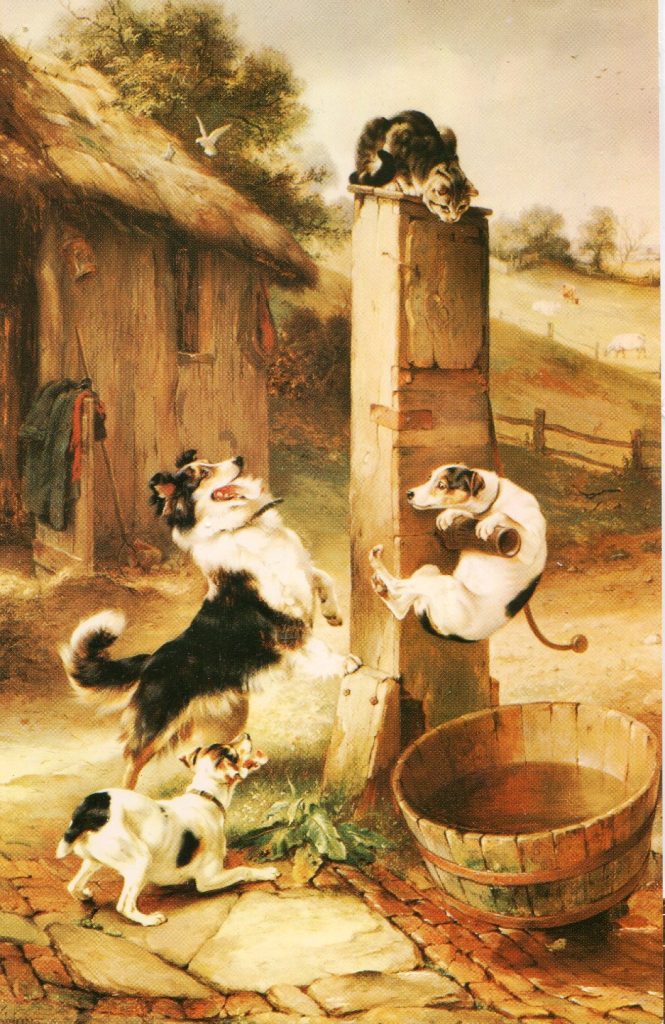 When the auction ended, the Haussner’s surviving daughter, Francie became a millionaire, but the restaurant became a legend.

Anne Ross enjoys researching and writing about the postcards she collects because it enables her to finally make use of the things she learned in art history class! She collects Raphael Tuck and Kohn Brothers postcards from the UK and Austria. Anne lives in California.
PrevPreviousHelmets and Boots – What it was like being a doughboy!
NextFra Angelico’s Angel MusiciansNext
8 Comments
Oldest
Newest Most Voted
Inline Feedbacks
View all comments
Hal Ottaway

What a wonderful story, and how nice that postcards helped to document their business. Thanks very much.

Thanks! Always regretted I never enjoyed a meal there.

I have a few of the postcards from Haussner’s, but never got to eat a meal there. I’d have likely ordered the crab cakes.

Excellent article. I myself have 30 different Haussner postcards (2 of which are continentals) and several duplicates. My favorite card has a message on the back written by Mrs. Haussner, who comments primarily about the ball of string–its source, weight (835 pounds) and length (800 miles).Any of 5 different phone numbers, all ending in -8365, appears on the backs of the cards.

Great story! I was lucky enough to dine at Haussner’s many times with my family growing up in the 70s and then one last time in 1994. I have a few of the postcards and am happy to learn more about them and the restaurant.

I enjoyed this article very much! Thanks Ann.

Thanks for this very wonderful story. I wish Haussner’s were still in existence. I have the Dexter card illustrated, but mine has the traditional corners (not rounded), so there must have been at least two printings of this card. I also have another two of the early Dexters–I like the dull finish on those cards. I have another Dexter card of “Miss Patterson,” with a B number indicating it must have been printed in the early 1960s. I also have 9 of the Mirro-Krome cards. You have made this assortment of cards much more interesting!