Reading a 402-page book that is 157 years old is not just a challenge, it is an accomplishment. A rare biography found in a California university rare book library details the life of an Italian Catholic friar. It has all the charm of a Dead Sea parchment. The Life of Beato Angelico de Fiesole, authored by Etienne Cartier was published by John Philip of London in 1865. It examines the life and times of a much beloved artist, and too it looks at the times (the 1380s to 1460s) with a thorough understanding of history and a sharp sense of humor.

The opening of Chapter One reads: “Country and age are the first elements of a man’s life. Birth assigns us a point in space and time, and to their influence we are necessarily subjected.”

With grateful respect offered to the above statement of circumstance, we learn that Beato Angelico first “received the light of day” in 1387 at the small village of Vicchio. His birthplace rests at the summit of an Apennine in the Tuscan region. Etienne Cartier writes that nothing is known of his parents, except his father’s given name (Pietro) and that his son was baptized as Guido. Little is known of Guido’s boyhood.

From the words of Cartier we learn that the boy’s education commenced in 1408, but this fact is contradicted by online sources which state that the first document concerning Fra Angelico dates from October 17, 1417. This is a gap of only nine years, and it may stand to reason that there are times in everyone’s life when they are simply uncommitted.

The 1417 document (a record of his first affiliation with his religious guild) mentions that his skills as a painter were already developed. The proof being receipts written for payments made for work done by his hand in January and February 1418. Cartier reports that no other records exist of his work accomplished early in life, for it was said that, “… Beato Angelico counted time and glory as unworthy of note and never signed or dated his early works.”

In centuries past, Angelico’s works, namely, “The Life of the Lord,” and more than one- hundred others were found in the churches of Florence, Pisa, Naples, Brescia, and Rome (mainly in the Vatican). Today his art may be seen in New York, Los Angeles, San Francisco, Detroit, Paris, Brussels, Berlin, Madrid, Munich, and Cortona.

Angelico’s middle-years (1433 to 1445) were spent in San Marco and Florence. The ten images on the postcards published by Sborgi of Florence, being examined here are definitely from that time, but the set may well be mis-matched. It is difficult to be sure, but when closely studied, only eight of the angels have contraptions that may be construed as instruments; the other two angels are equally sacred but are posed in defensive or prayerful modes. A second point of confusion is the placement of the captions. 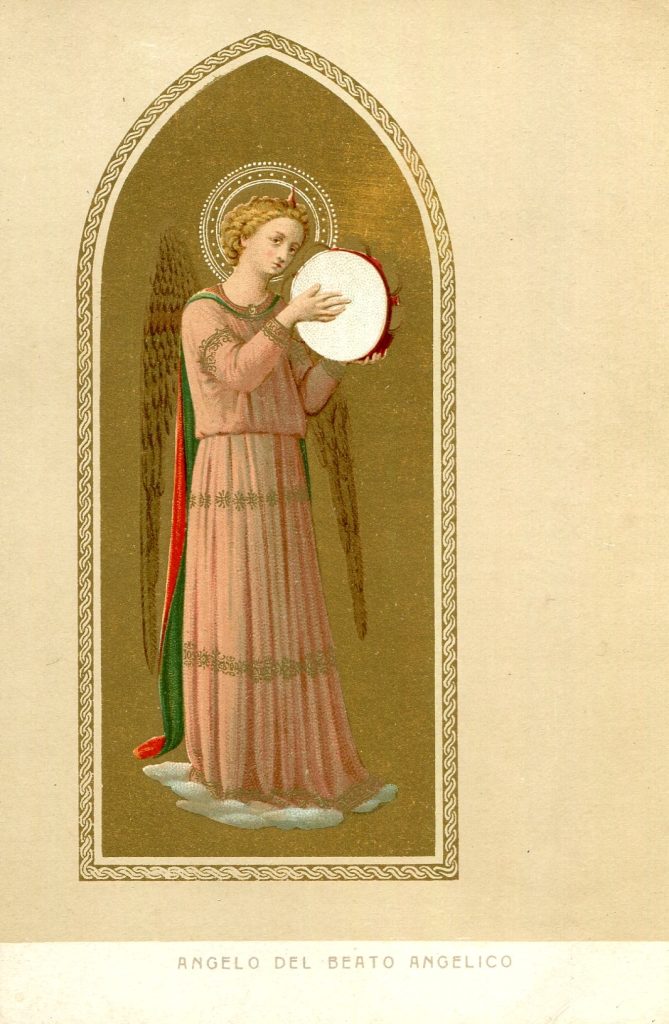 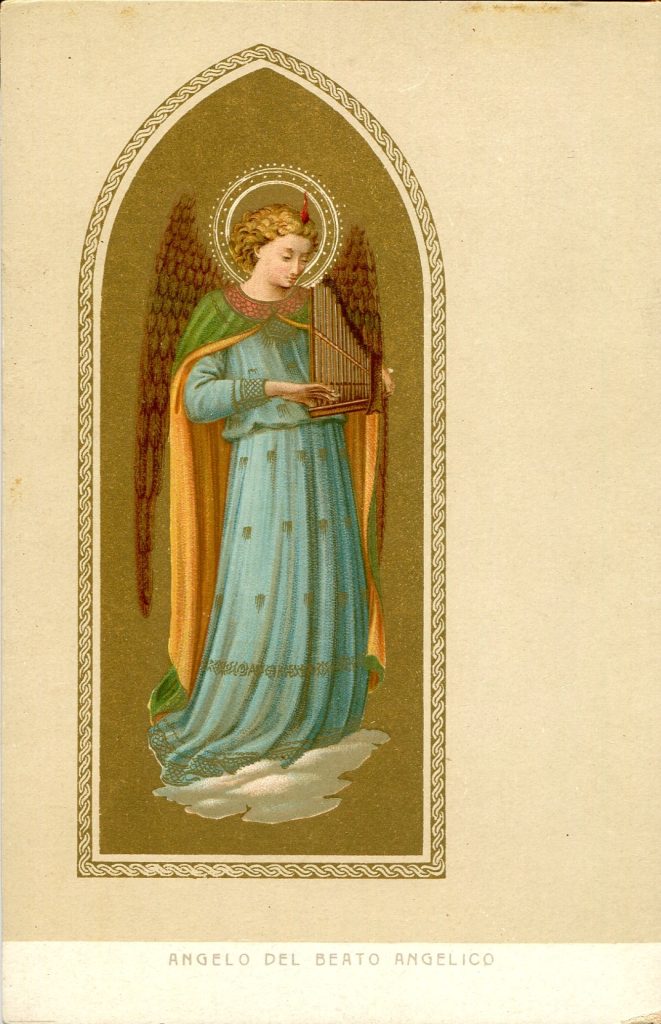 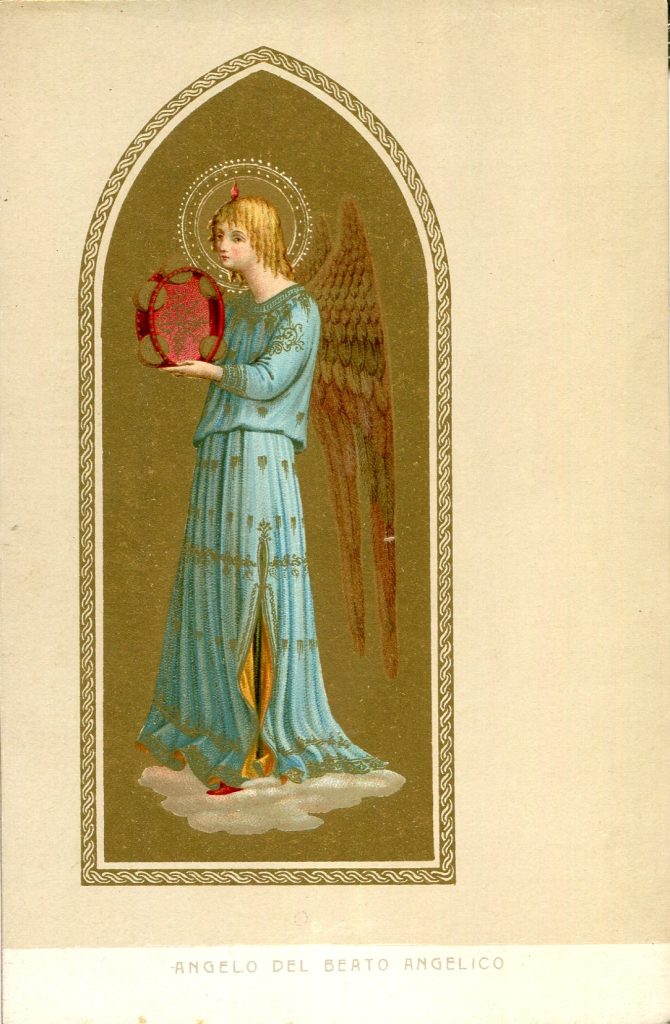 It is unclear where these “angel panels” are today, it may be safe to say they are no longer together as an altarpiece as they were from the 1440s to the 1700s. Conjecture now is that each angel was sent for safe keeping to museums and churches throughout Europe when the piece was dismantled in preparation for a remodeling of the church in the eighteenth century. 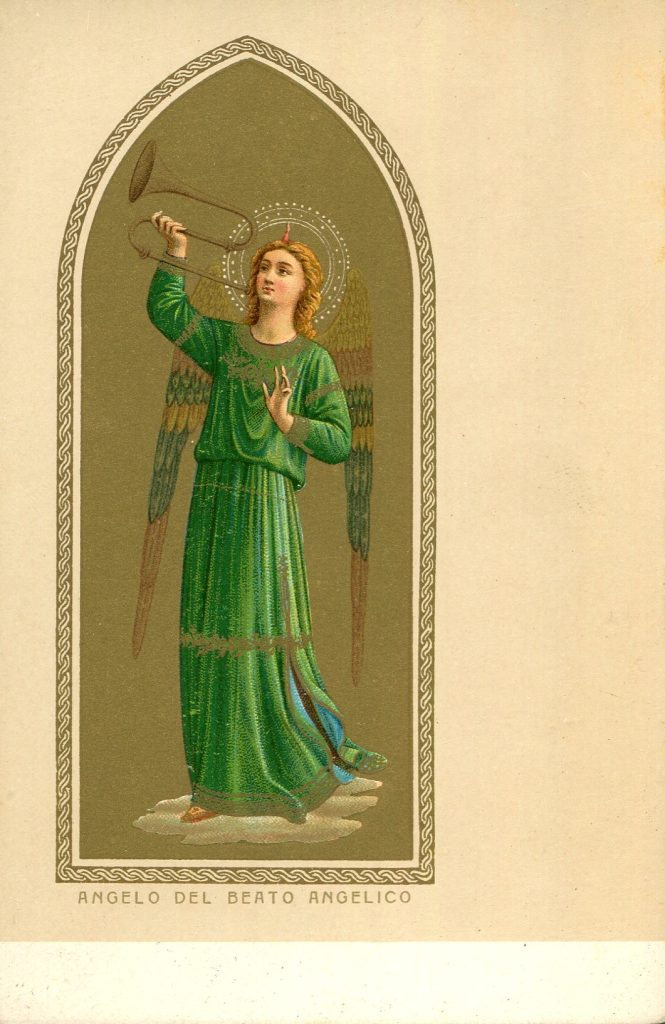 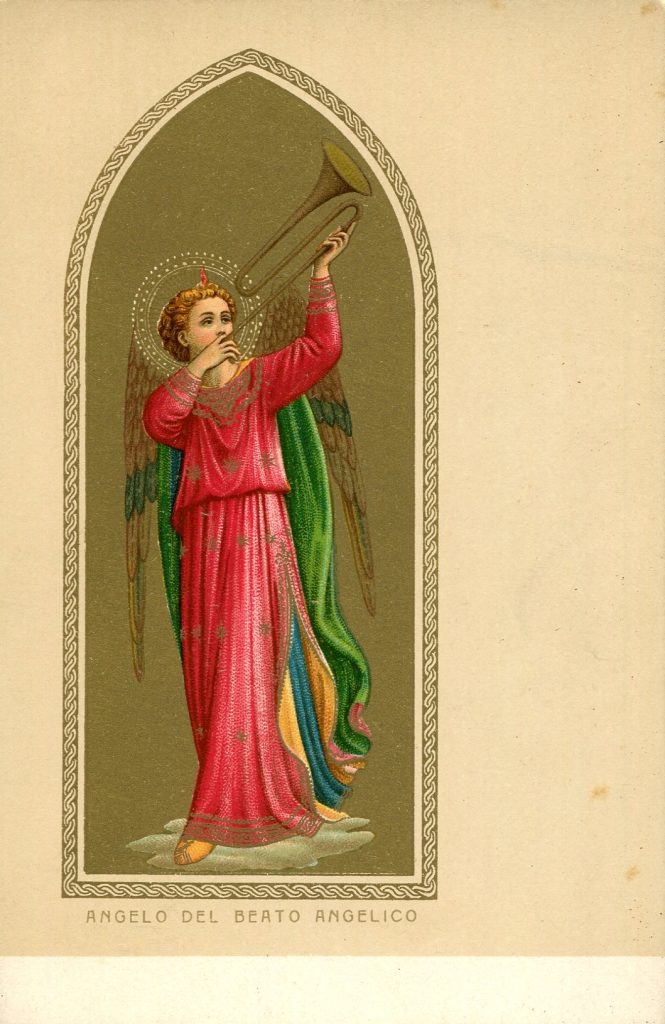 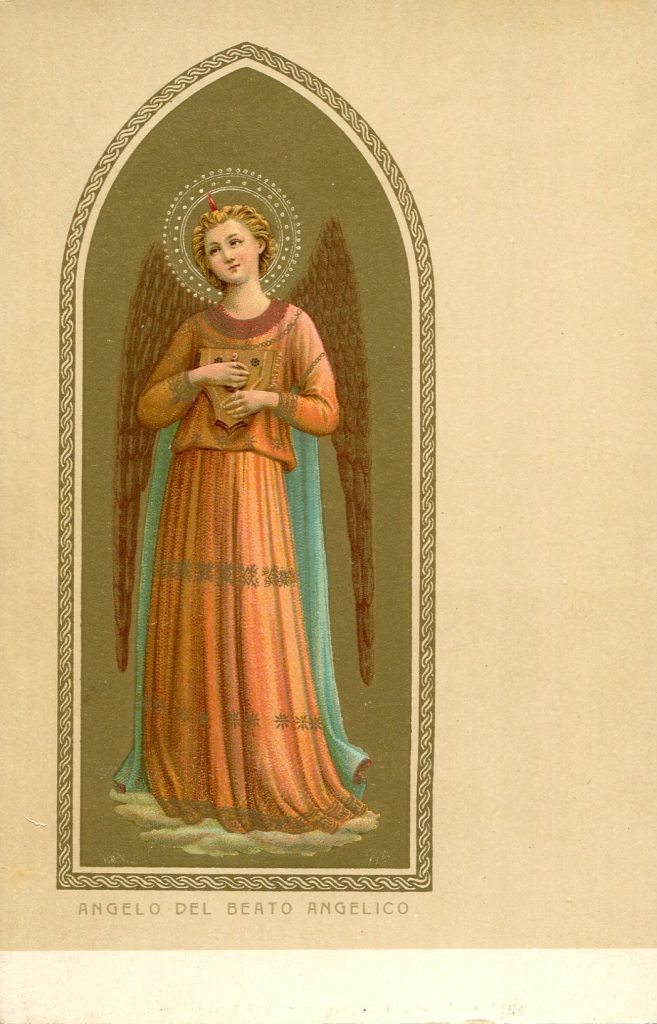 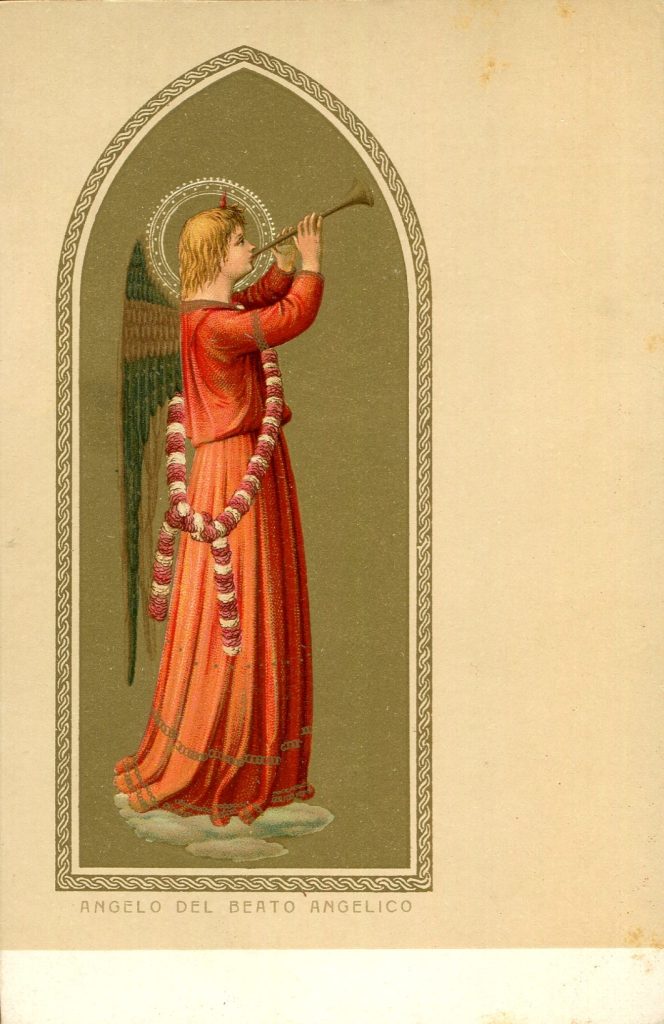 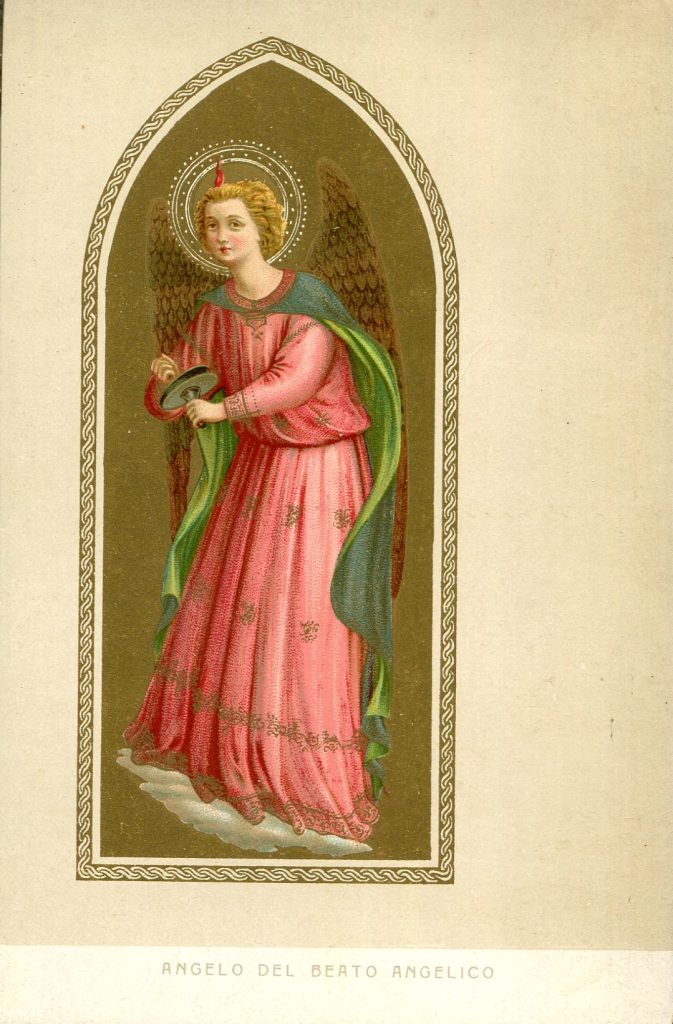 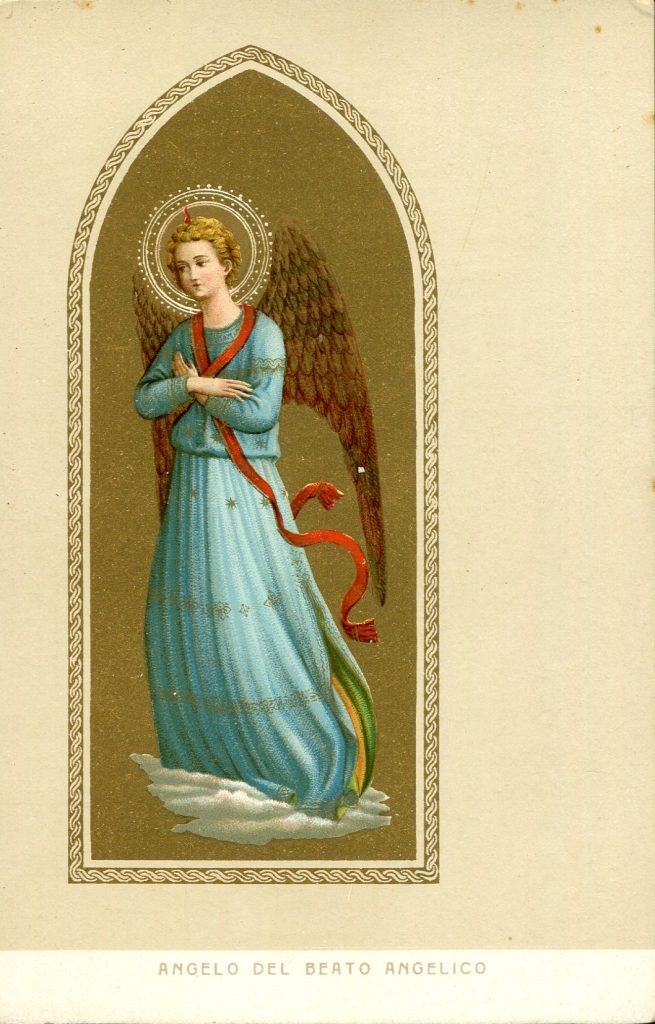 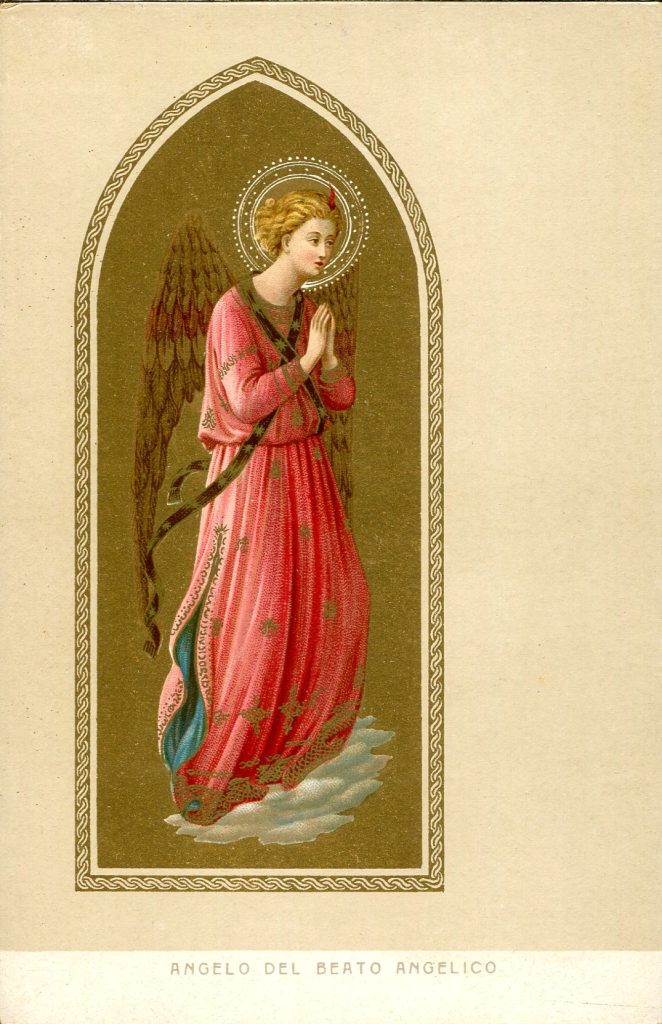 In 1445 Angelico was summoned to Rome by Pope Eugene. The pope wanted new frescoes in the Chapel of the Holy Sacrament. In the decade that followed Angelico divided his time between Orvieto and Rome, during which he accomplished or supervised no less than three major works portraying the lives of St. Stephen, St. Lawrence, and the four evangelists: Matthew, Mark, Luke and John. 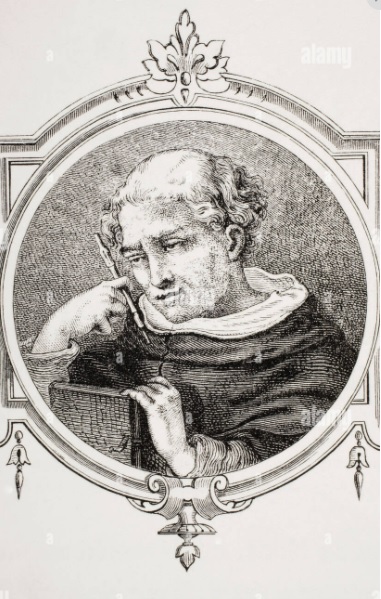 SPECIAL NOTICE FROM YOUR EDITOR: Just before publication Postcard History has received notice that Angelico’s complete set of twelve musical angels is for sale on eBay with the original sales envelope (wrapper). This is an exceptional opportunity to purchase this set. In addition to the cards seen above, the two further images show an angel dressed in green with a drum and an angel dressed in red with a violin.

Ellie McCrackin is a pen-name used by one of America's foremost archivists. Preferring to remain in the background, Ellie ghost writes for some of the leading world historians. She loves postcards and loves to write about the stories they tell.
PrevPreviousHaussner’s Restaurant Made Dining a Fine Art
NextThe Horse GuardsNext
1 Comment
Oldest
Newest Most Voted
Inline Feedbacks
View all comments
Bob Kozak

Fra Angelico apparently served as the inspiration for the name “Frangelico” being applied to a brand of hazelnut liqueur.