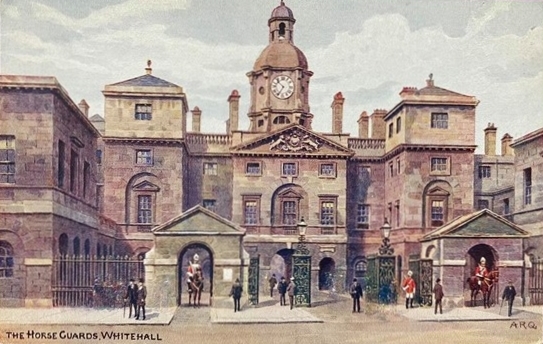 Time is very important here at the Horse Guards in Whitehall, London. 10:34 AM, the time shown on the clock tower in this postcard, is significant. The artist Alfred Robert Quinton, signed A. R. Q., has chosen to depict a specific moment in time when Londoners and cavalry fans know exactly what is happening behind the scenes.

In 26 minutes, at 11:00 AM, the famous ceremony, the Changing of the Guards, will take place in front of the Horse Guards building. At this moment, 10:34, the mounted Life Guard in their red tunics are waiting to be relieved by the new guard, who left their Hyde Park barracks at 10:28.  They are on their way to the Horse Guards Parade Ground where the ceremony takes place every hour (or every 30 minutes when it is very cold) until 4 PM.

The Four O’clock Dismount Parade is also called the “Punishment Parade.” At that time in the watch, each Life Guard dismounts from his horse for a thorough inspection of his kit and his mount’s saddlery. This tradition dates back to 1894 when Queen Victoria found the guards drinking and gambling in the afternoon instead of doing their duty. She proclaimed that they would be punished with a Four O’clock Inspection until 1984. The current Queen has chosen to continue the tradition.

On instructions from King Charles I, the original horse guards building was erected on Henry VIII’s old jousting grounds, the Tiltyard. Ironically, they led Charles I through the gateway of his own Old Horse Guards building to his execution in 1649. The gruesome event took place in the roadway outside Horse Guards. You can’t see it on this postcard, but the tower clock, which before Big Ben was finished in 1859, was the official London timepiece, bears a black mark on its face at 2:00. It  commemorates the time at which the king was executed.

The current Horse Guards building, designed by William Kent was built in 1745.

This card is important to me because, when I was younger, I attended a riding school called Morven Park International Equestrian Institute, modeled after the British cavalry schools, one of which is Sandhurst. [Sandhurst is one of several royal military academies of the United Kingdom. It is located in the village of Sandhurst. The Royal Military Academy Sandhurst (RMAS) is commonly known as such.]

Morven Park’s director and my mentor, Lieutenant Colonel MAQ Darley, who dates back to the 1960s was commander of this very same Horse Guards. The clock tower on the Horse Guards reminds me of Col. Darley’s saying, “Morven Park time is always five minutes ahead of time.” It is likely true of the Horse Guards as well. They are expected to be ready for the eleven o’clock changing of the guard at 10:55 AM!

Anne Ross enjoys researching and writing about the postcards she collects because it enables her to finally make use of the things she learned in art history class! She collects Raphael Tuck and Kohn Brothers postcards from the UK and Austria. Anne lives in California.
PrevPreviousFra Angelico’s Angel Musicians
NextMadeira – Isles of the BlessedNext
3 Comments
Oldest
Newest Most Voted
Inline Feedbacks
View all comments
Hal Ottaway

Lots of details that I had never read about. thanks very much!!

Colonel Darley reminds me of a music teacher I knew, whose favorite saying was “To be early is to be on time. To be on time is to be late.”

Love to read about British things as my Dad was from London, 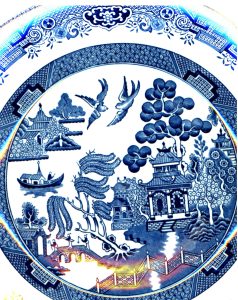