In the United States the urge to romanticize the large-scale cowboy ranches and life in the Old West found expression in Buffalo Bill’s Wild West Show which toured widely from 1883 to 1913. In the Canadian northwest that same grand romantic tradition gave birth to the Calgary Exhibition and Stampede in Alberta.

This annual ten-day event has kicked off with a huge parade every July since 1912 and has become the great Canadian rodeo and agricultural fair. It is one of the largest rodeos in the world, with over two million dollars at stake in traditional tests of cowboy against animal.

A friend recently gave me some quite interesting Calgary Stampede real photo postcards from the early 1940s. His late father was in Calgary then, stationed at a Canadian Navy training base.

His father would at times show them to friends as an interesting souvenir of the era.  These six cards are just a few of the many RPPCs produced for this event since is founding. 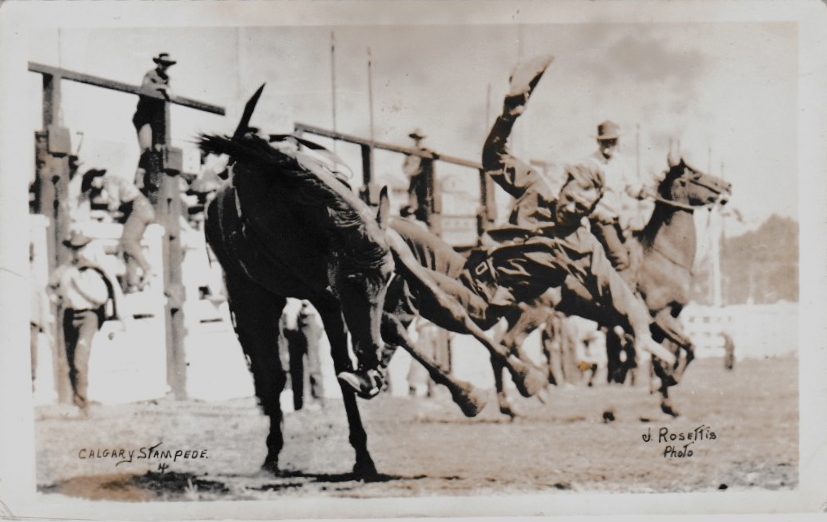 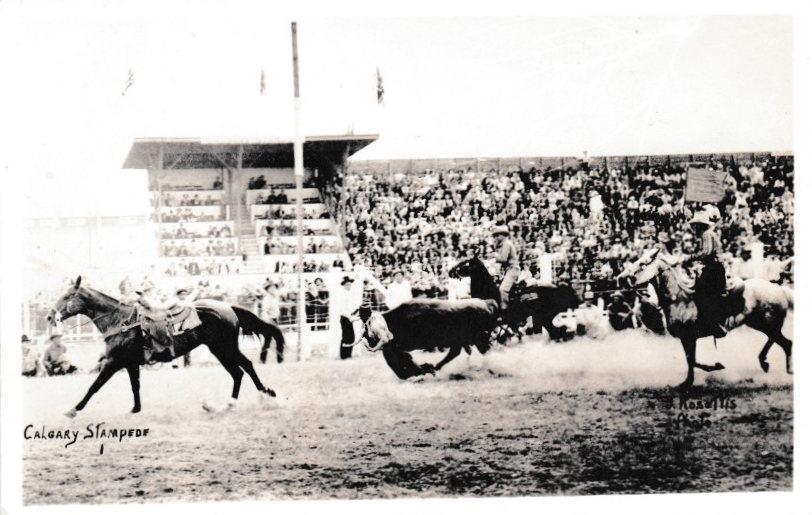 Wild calf roping, also known as tie-down roping, is a timed rodeo event. In this competition the rider, in as short a time as possible, aims to catch the calf by throwing a loop of rope from a lariat around its neck. The rider then dismounts from the horse, runs to the calf, and restrains it by tying three legs together.

Chuckwagon racing is an equestrian rodeo sport in which drivers in a chuckwagon led by a team of thoroughbred horses race around a track. The sport is most popular in the Prairie Provinces of Canada. (There are two major racing circuits: the World Professional Chuckwagon Association and the Canadian Professional Chuckwagon Association.) The Calgary Stampede chuckwagon race is the most popular in the world.

These real photo cards were produced by Rosettis Studio. The following is an online bio that offers Postcard History readers a fair look at the man behind the camera: Joseph L. “Joe” Rosettis, born in 1909 at Glasgow, Scotland, was brought to Canada when he was an infant. His Lithuanian family settled in Toronto. As a young man he worked in the Kodak Company office in Toronto.

Throughout the 1930s he travelled around the world as a photographer for the Associated Screen News in Montreal. He was often known to take promotional assignments for the Canadian Pacific Railway (CPR). In the summers he was based in Lake Louise, Alberta.

In 1940 Joe married Kathleen “Kay” Celia Milne. Kay was born in 1912 at Mekiwin, Manitoba. As a teen, in the early 1930s she worked as a cook in the tea house at Lake Agnes, Alberta. She soon became manager of the Moraine Lake Lodge. After their marriage, the couple moved to Calgary where Joe worked as a Calgary Herald photographer.

During the Second World War he was a public relations photographer for the Canadian army.

After the war Joe also free-lanced for the Albertan and the Calgary Herald, as well as contractual work for various corporations. In the early 1960s they did some contract work for the Glenbow Museum (in Calgary) and set up the museum’s first photo lab.

Joe and Kay had three children.

Kyle Jolliffe lives in Toronto, Ontario. For more than twenty years he has been an avid collector of New York City postcards from the pioneer era to the 1970s. He has given presentations to Southern Ontario postcard clubs on the stories they tell of this great metropolis and the other stories they lead to.
PrevPreviousSouvenir of a Different Notre Dame
NextFrançois Flameng and the Society of Friends of the Paris Army MuseumNext
5 Comments
Oldest
Newest Most Voted
Inline Feedbacks
View all comments
Graham

Splended photographs of the rodeo and an interesting story. I also collect old postcards of New York City

I once entered a display of “Stars of the Rodeo” in a postcard show, but the cards were chromes several decades more recent than those which feature Rosettis’s work.

Another swell feature, Kyle. Love reading about the rodeo, and cowboys and all of the folks who followed these rodeos, who made it all work for the audience. Lots of work to care for the animals
and fencing and just so much stuff that had to be moved or arranged for as the rodeo would move around the country. Also GREAT to read about the photographer and his family and all that he added to these massive events, all before the music concerts that we marvel at today.

These are always very interesting. I read to see what other people collect and see the history of wonderful postcards

Great story and research, Kyle. There is a nice book about Calgary Stampede postcards, written by Ken Tingley in 2012. As you may know, the Stampede was relocated to Winnipeg for its second year, 1913 — as a Winnipeg collector I have learned that there are hundreds of outstanding Stampede RPPCs from that one year alone. After a hiatus during the war, the Stampede returned to Calgary where it became the iconic annual event that it continues to be.