François Flameng was born in the same year (1856) that the Congress of Paris convened to sign the Treaty of Paris, ostensibly to end the Crimean War. François was the son of Leopold Flameng, the Parisian printmaker who earned celebrity by making prints of notable members of French society.

Flameng struggled for recognition in his early years, but satisfactorily provided for himself by painting history art and portraits of royal women and children. The quality of his art was high and well liked, but apparently postcard publishers paid him no heed. If his art has ever been adopted in a postcard format there is no evidence of it. If it had been, the quality of the cards would mirror that found on most Stengel lithographs – a good example of the quality would be the last three-hundred images in the Stengel “29000” series. Name recognition and renown did not come to Flameng until his very-late fifties. He was 58 when World War I began. 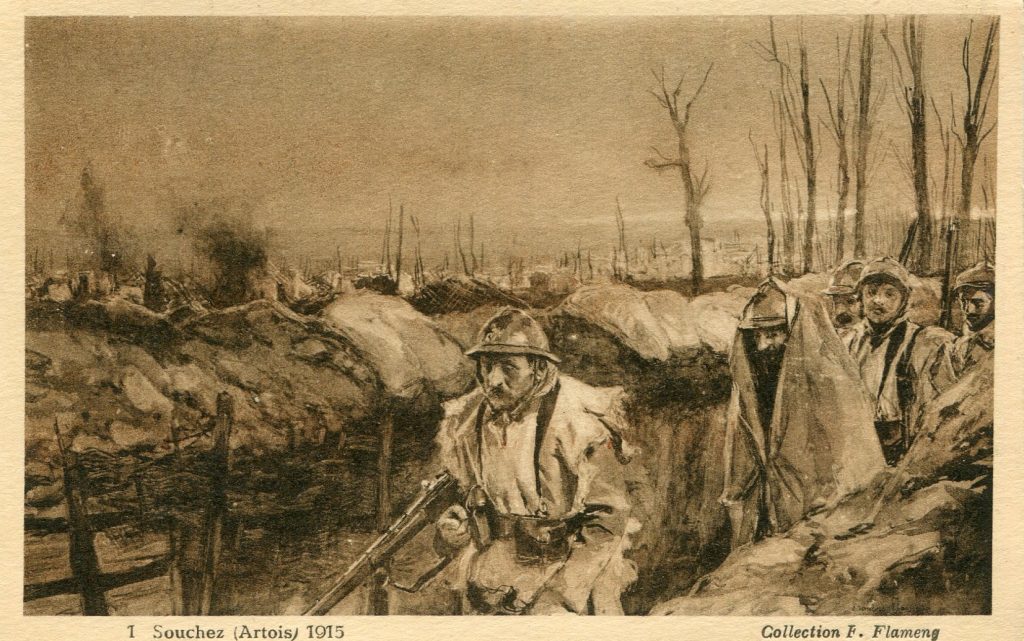 Flameng’s painting of the war garnered so much attention that he was appointed as honorary president of the Society of Military Artists, which in turn earned him an accreditation from the war ministry as an official documenter. Unlike others who sketched and left the details for peacetime, Flameng finished his canvases and shipped them back to Paris for immediate display at the Hotel des Invalides.

The wartime exhibits were not always positive. Often in public forums and in critical review Flameng’s paintings were ridiculed as being too real. The absence of heroic drama was another often-heard condemnation.

Because of the continuous sequencing of the exhibitions, Flameng’s work presented an authentic chronology of the war, starting in 1915 through November 1918.

The armistice of World War One was signed, as we know in the eleventh hour of the 11th day of November. Just one year later, François Flameng was elected into the French National Academy of Design; his official title was honorary corresponding academician. Such an honor bestowed, Flameng was given the opportunity to designate ownership status of what had become French national treasures. He chose the Parisian Museum of the French Army (Musée de l’Armée).

The Society of Friends of the Army Museum, an organization whose mission was to support and further the influence of the museum, both at home in Paris and abroad, considered Flameng’s donation as tacit approval of their mission. In the artist’s honor a twenty-piece postcard set was created. An exact date is unknown but one card has been found with a postmark of “PARIS 10-7-1925” – Friday, July 10, 1925.

For the convenience of Postcard History’s readers who collect World War One cards, the following checklist is provided in text and spreadsheet form. If you wish, click the Flameng Checklist and a printable sheet will appear.

The following are a few examples. The numbers preceding the titles in the captions correspond to the card number in the first column of the checklist. 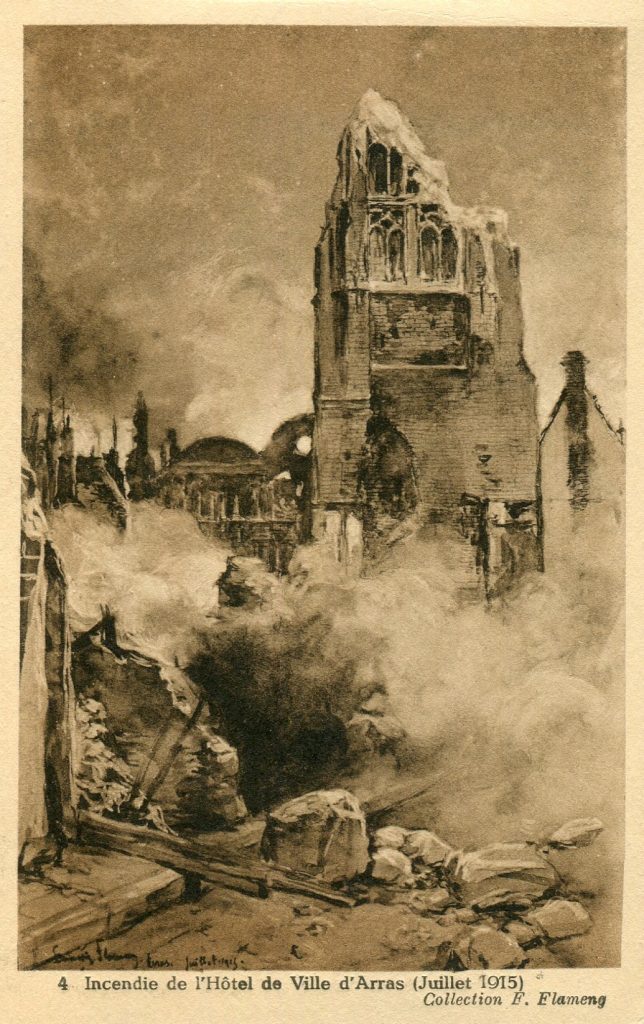 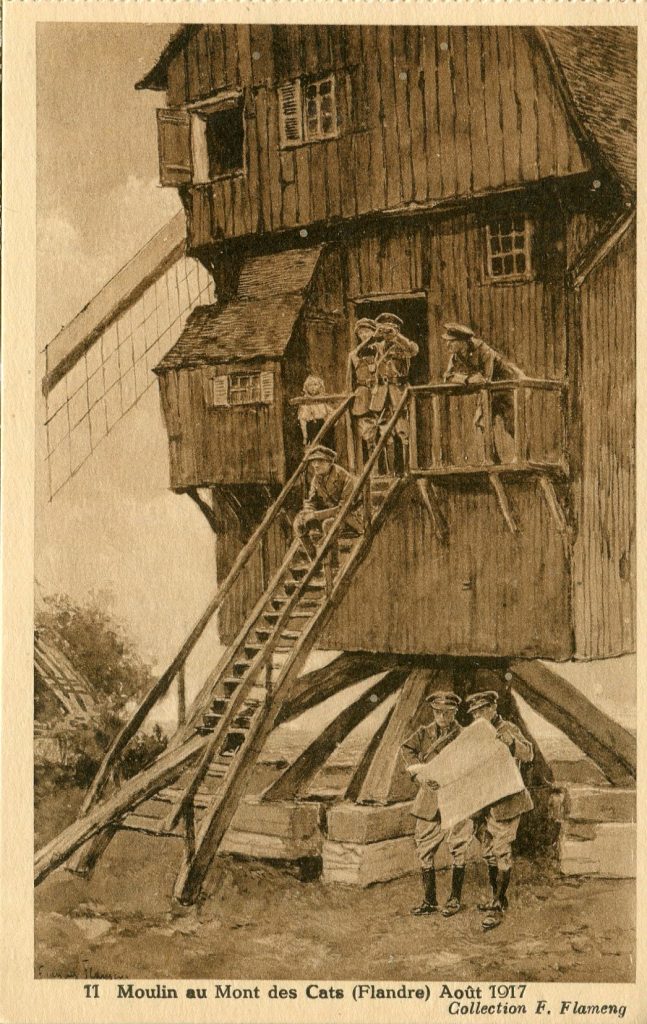 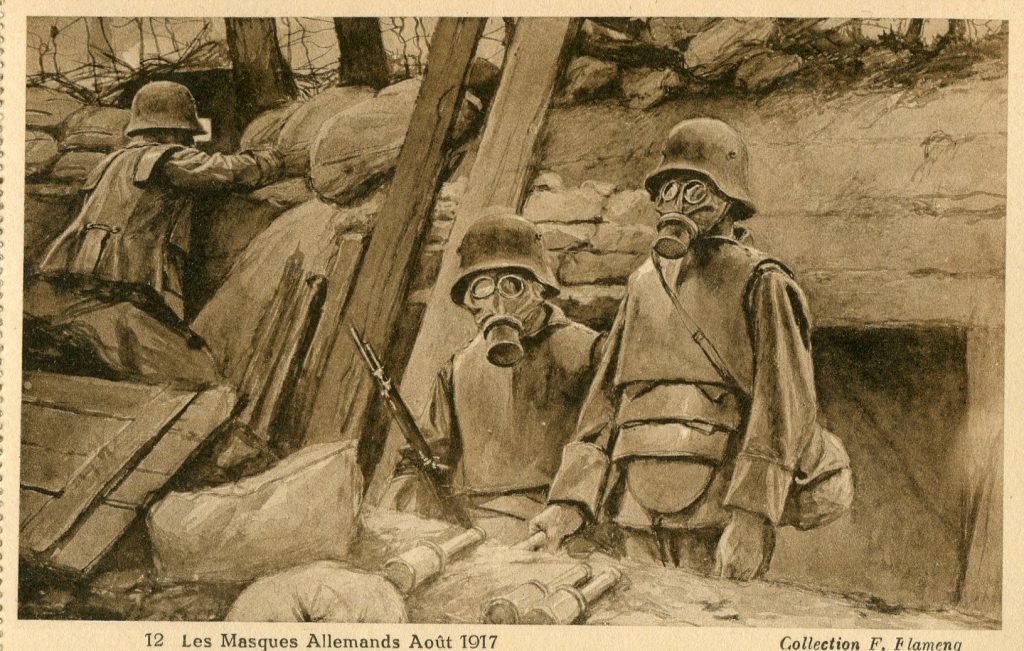 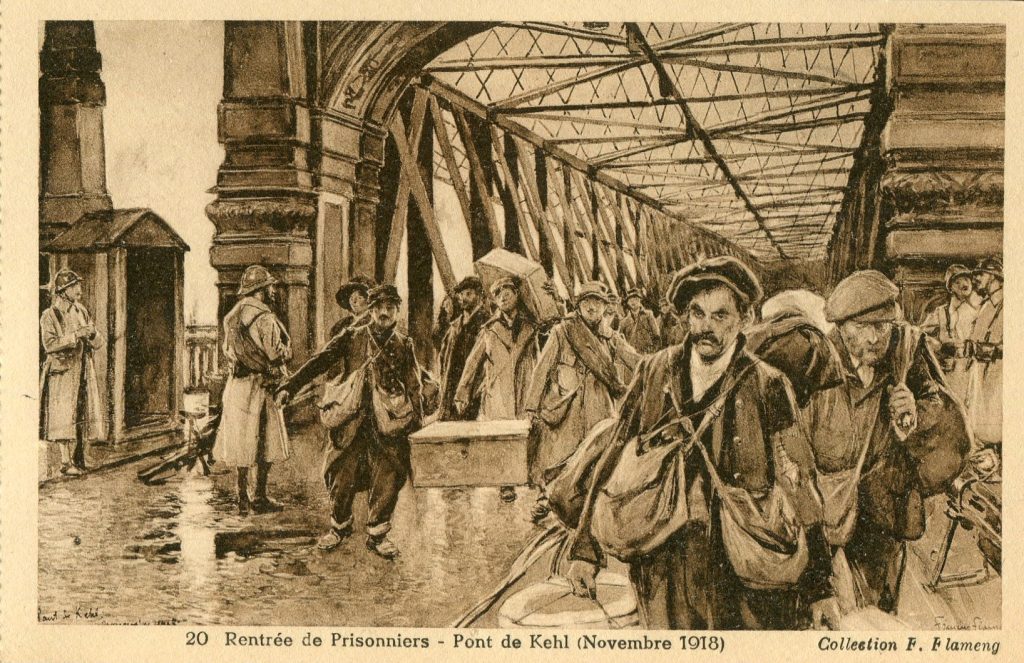 Click Below for the Checklist in PDF Format
Flameng Checklist

The Staff of Postcard History offers this article for your enjoyment. It is a combined effort of many: our publisher, editor, webmaster and collectors/contributors far and wide. Please use the COMMENTS feature below to let us know how we're doing.
PrevPreviousJoe Rosettis’ Real Photos of the Alberta Stampede
NextA Fifth Sunday Special – (Part I of Year 2)Next
3 Comments
Oldest
Newest Most Voted
Inline Feedbacks
View all comments
Terry Boyce

These are beautiful drawings. They really convey the mood of the scene.