If you are aware of names the likes of R. E. (Ralph Emerson) Myers, Elmer Tiling Cunningham, and Lee De Forest, you are very well versed in the history of radio. Each was an electronic engineer who specialized in all aspects of radio.

In the July 1930 issue of Radio Retailing Magazine, a double page advertisement touted the accomplishments of the National Union Radio Corporation in obtaining the services of Dr. Ralph Emerson Myers who until March of that year was the chief engineer of the Westinghouse Lamp Corporation.

Myers was at the time the ranking authority on vacuum tubes and their capability to enhance the performance of electronics of all kinds, but especially radios.

Similar advertising was carried in other national magazines and newspapers for the next several months. The display ads included a photo of Dr. Myers, supposedly hard at work examining a National Union Radio tube. The image that follows is one such ad from the Harrisburg (Pennsylvania) Telegraph. 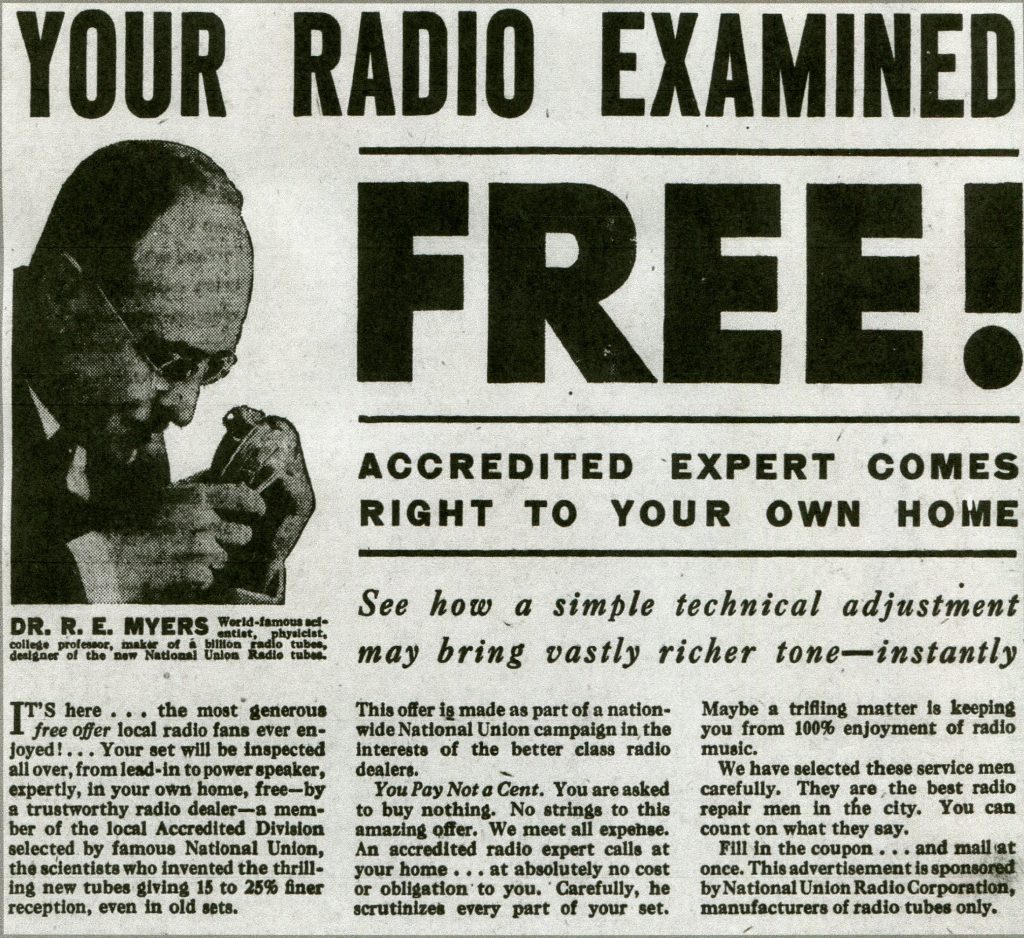 This advertisement extended an offer to all radio owners to have their sets examined by an accredited expert who could come to your home to perform a simple technical adjustment that would improve your radio reception – instantly.

The accredited expert who would visit your home to do the free examination would not be the world-famous Dr. R. E. Myers, himself, so who would it be?

Depending on where you lived, it would be an employee of a trustworthy radio dealer who was a member of the Accredited Division of the National Union Radio Corporation. There may have been hundreds of such experts across the land, but if you lived in Connecticut, one such person was Angelo Ortoli.

Fiore Ortoli arrived in America on October 20, 1902, aboard the Citta di Napoli; he was 28. His intended destination in the U. S. was the home of his cousin, Angelo in Connecticut. Ortoli had been promised a job at the American Brass Company in Ansonia. When he, with his wife Teresa and their infant son Angelo settled into their own home on Main Street in New Haven, their future looked bright. Mr. Ortoli was a skilled furnace man, capable of smelting copper from ore (chalcopyrite) and mixing it with the proper alloys (zinc and zinc-oxides) to make brass. He had an important skill and workers with such skills were paid well.

By 1931 the Ortoli family – in the vernacular of today was complete – their last son and tenth child, Frederick, was born. The family then consisted of four sons and six daughters. Fiore Ortoli may have been the kind of patriarch who believed that family was important, but work was necessary for family success and every one of his children would learn skills that would provide for their family in the exact same way as he had provided for his.

Angelo Ortoli, Fiore’s and Teresa’s oldest son, who made the trip to America in his mother’s arms must have been inspired by his father’s work ethic. Angelo married Margaret Ferry on June 27, 1927. At the time, Angelo was working as a crane operator, making good money in a very dangerous job. An on-site-construction accident that seriously injured a fellow worker in 1927 changed Angelo’s mind about how to make a living. He enrolled in the new vocational-training academy of the National Union Radio Corporation.

Training for a new vocation and finding new ways to make a living using your new skills are often equally difficult. It was apparent however that NURC covered most of the bases – including advertising postcards that they provided free of charge to their academy graduates.

Angelo Ortoli made good use of the new postcards.

Some of the postcards were comic in nature and often poked-fun at the man-of-the-house for his inability to recognize the problems with the family radio. Here are some examples: 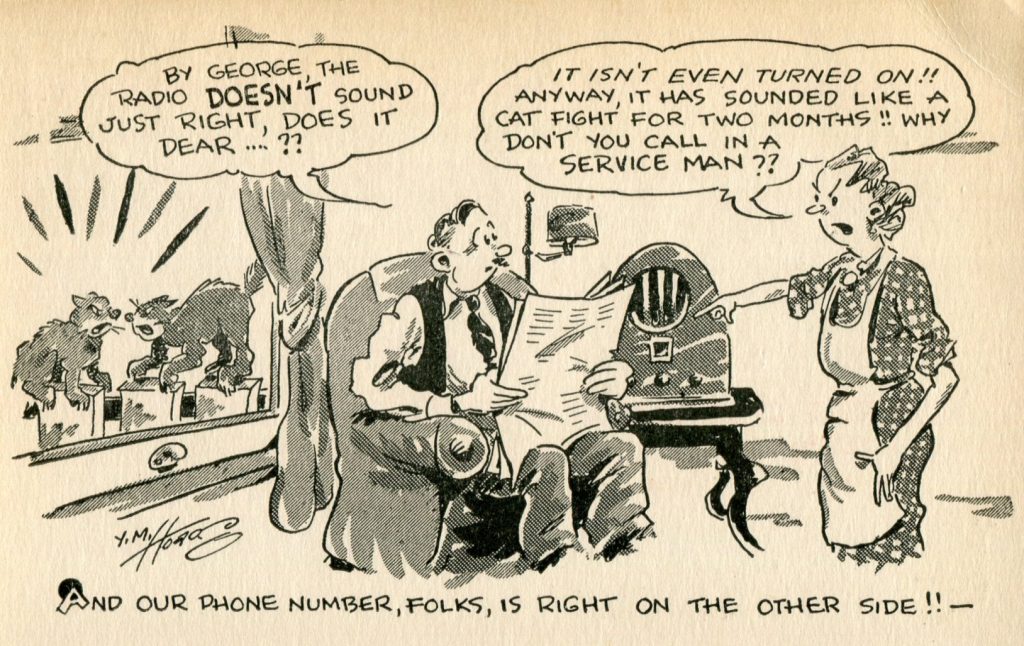 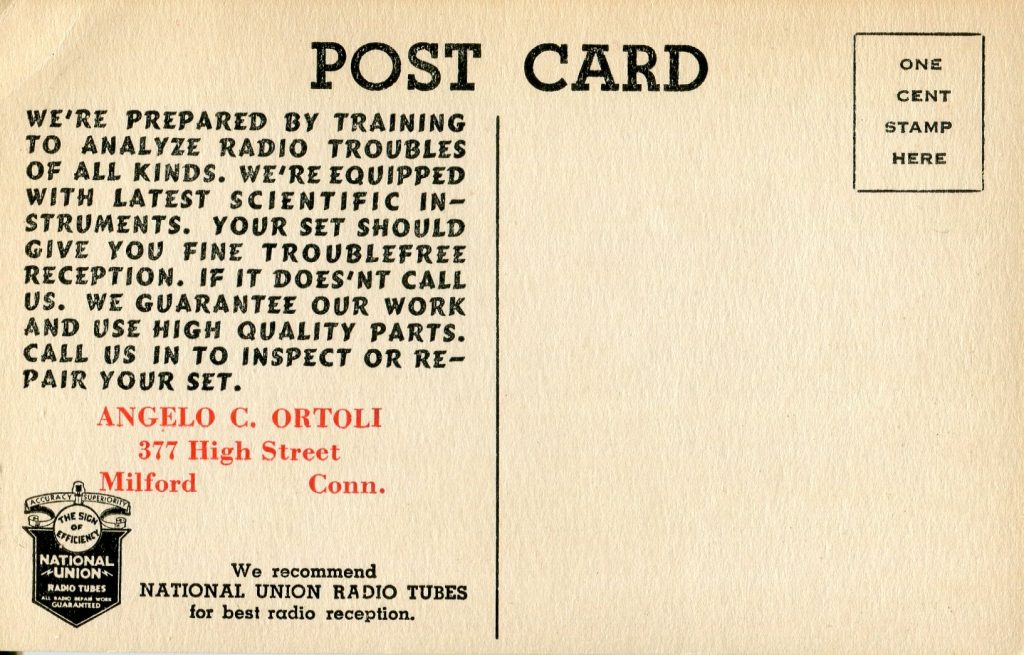 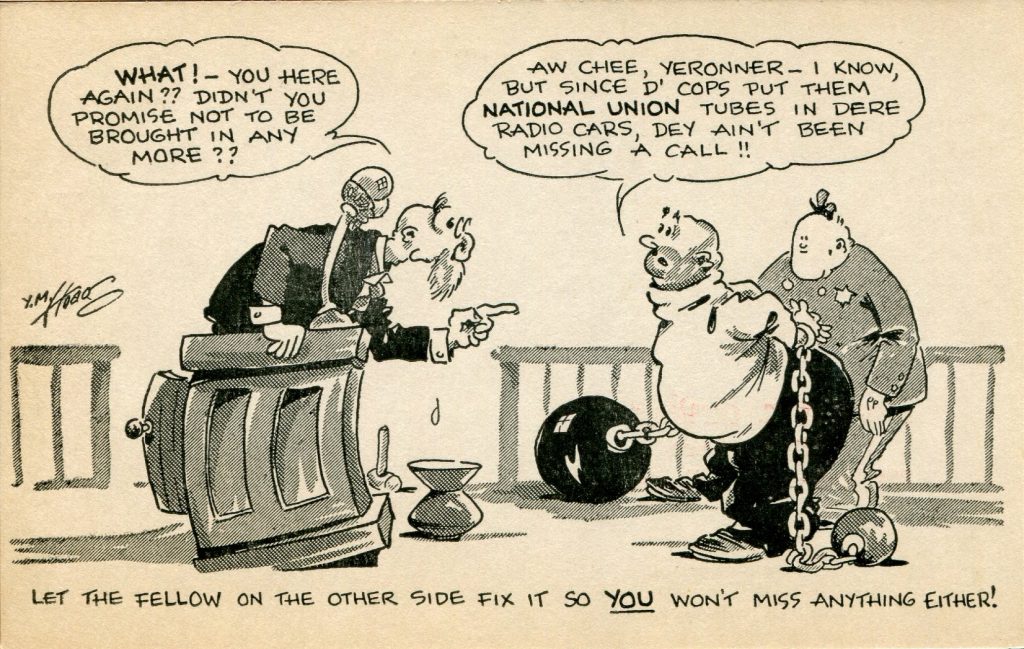 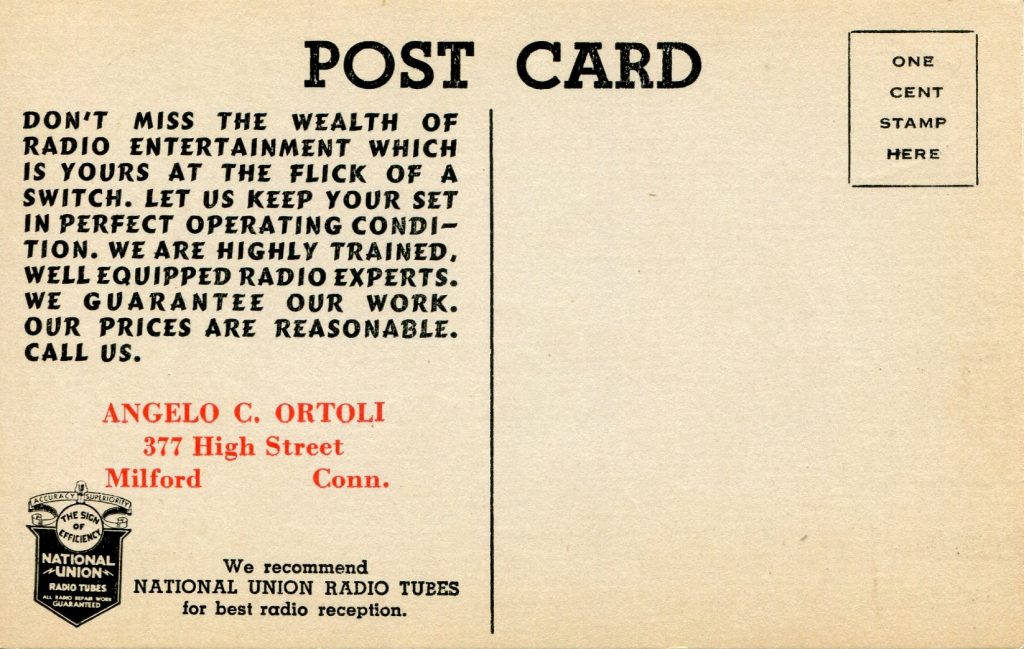 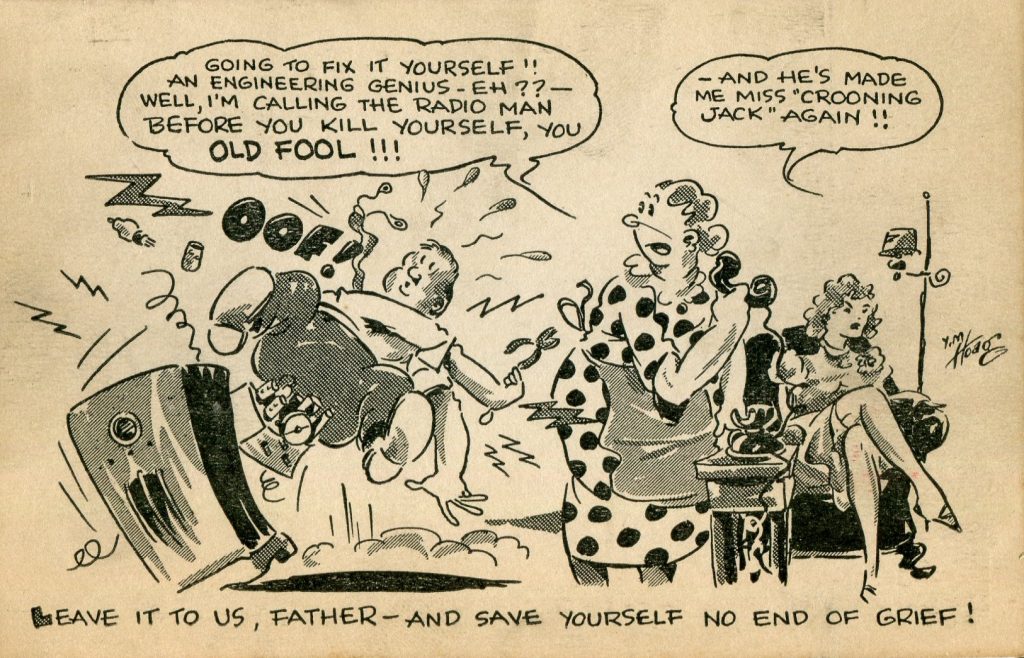 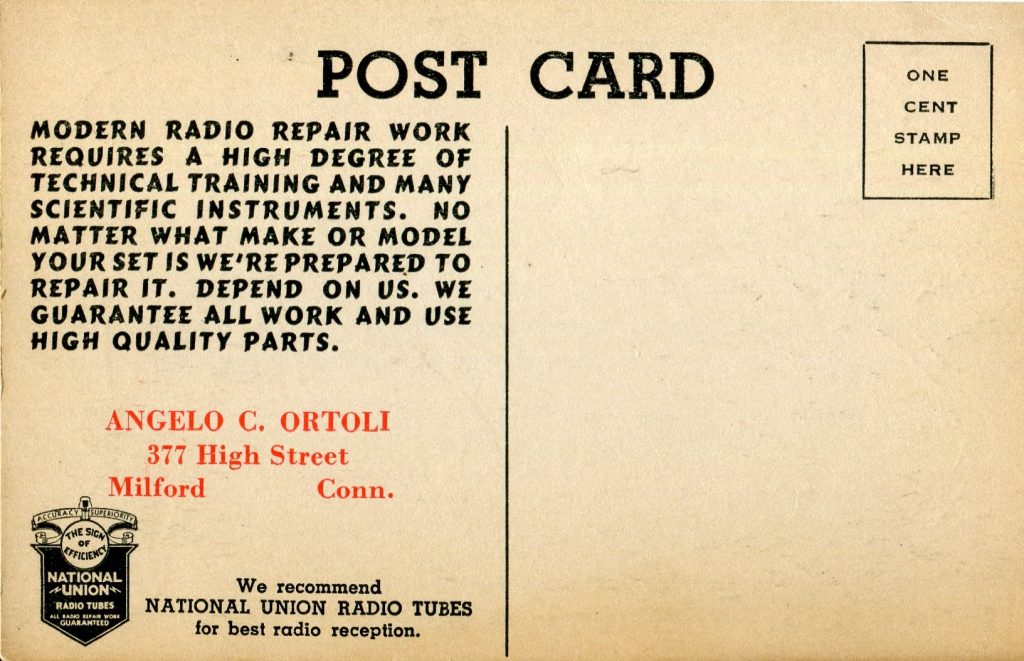 “Fix it yourself, eh? I’m calling the radio man.” 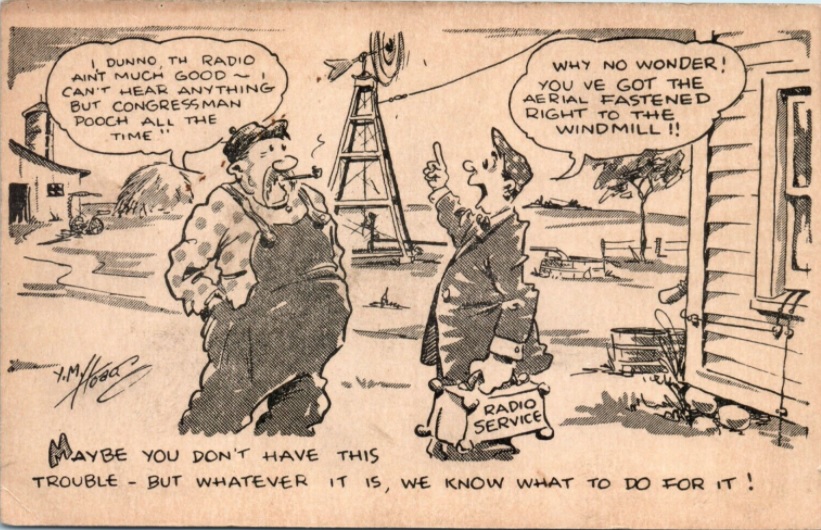 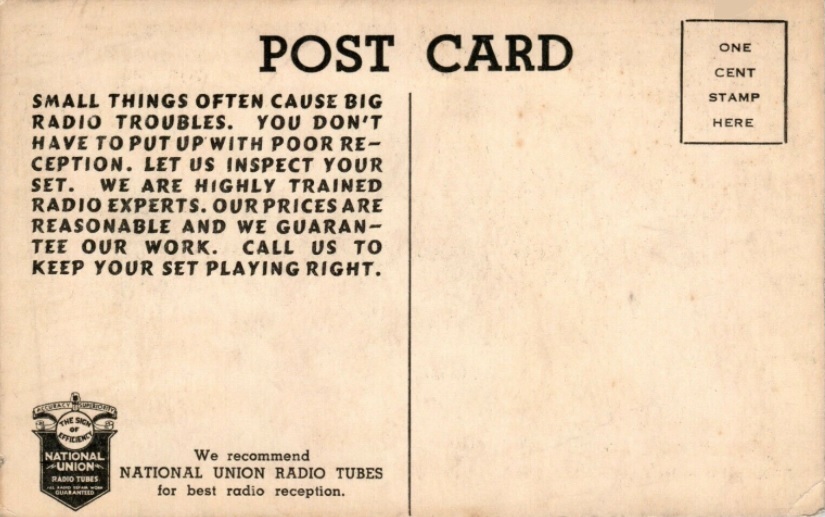 “You’ve got the aerial fastened … to the windmill!”

Ray Hahn is a retired educator, but he has never stopped teaching. His decades of researching, writing and editing a newsletter for the South Jersey Postcard Club has been a world-class education in trivia. In addition to postcard collecting, Ray’s other interests include history, genealogy, and touring the world with his wife Marie. Ray often advises his readers to "Join me as we explore the world one postcard at a time." Ray and Marie live in New Jersey.
PrevPreviousTeddy Roosevelt and Race Suicide
NextPostcard History’s Lighthouse Tour No. 3Next
2 Comments
Oldest
Newest Most Voted
Inline Feedbacks
View all comments
Hal Ottaway

Oh this is a great story. I have not seen any of these postcards before, but sometimes we set our sights on say, something colorful and miss out on something like this that is cartoon-like and black and white. I will be watching for some of these. They would be a swell addition to my Social History category. Thanks very much for this feature this week.

I’m too young to have been around during the golden days of radio, but I remember when you could take your TV tubes to be tested by the machines featured in selected stores.