In elementary school geography classes, the initials H O M E S has been taught as a good mnemonic to remember the names of the Great Lakes. “One of the HOMES,” is a common crossword clue, fostering the thought that the idea is general knowledge. I suppose it works for the world of left-brain people, but O E H M S works better for me. Yes, I know it can’t be pronounced but it does help in remembering the east-to-west geographic order of the lakes.

Should you care to start a collection of Great Lakes postcards, you should be ready to amass cards from at least 396 locations. Many of the 396 lighthouses around the five Great Lakes are in the United States, but a great number are on Canadian shores and in Canadian waters. In all the aggregate number of shoreline miles tops out at more than 11,000.

[A point of personal privilege sought by your editor. When the first in this series was published, emails were received that suggested the inclusion of the famous “X” lighthouse in the beautiful city of blank, in the state of “pick-one!” The ideas expressed were all good suggestions, but I didn’t change my method of picking which lighthouses to feature. They are the ones I like best, which is to say, if you have a favorite lighthouse, write about it and email me at editor@postcardhistory.net.]

This Lighthouse Tour of the Great Lakes begins at
Lake Ontario 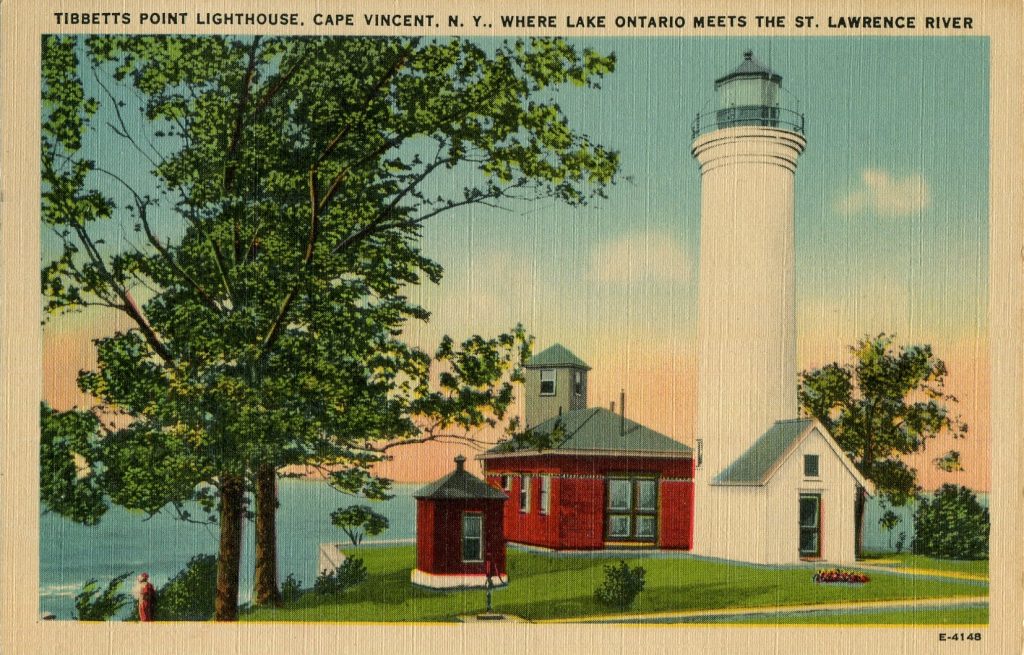 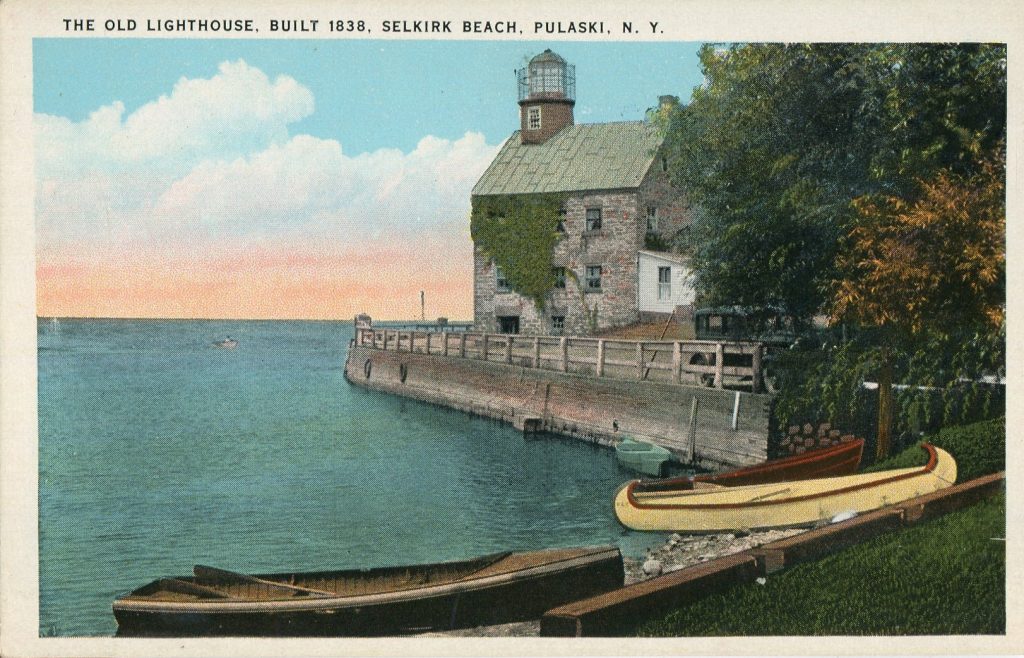 Tibbetts Point Lighthouse stands 70 feet above Lake Ontario, near Cape Vincent, New York. The circular brick and stucco tower was constructed in 1854 and is still in use. The Fresnel lens in the lantern room is one of sixteen still in use around the Great Lakes.

Selkirk Lighthouse is purported to have saved lives on its first day of operation in 1838. Located at the mouth of the 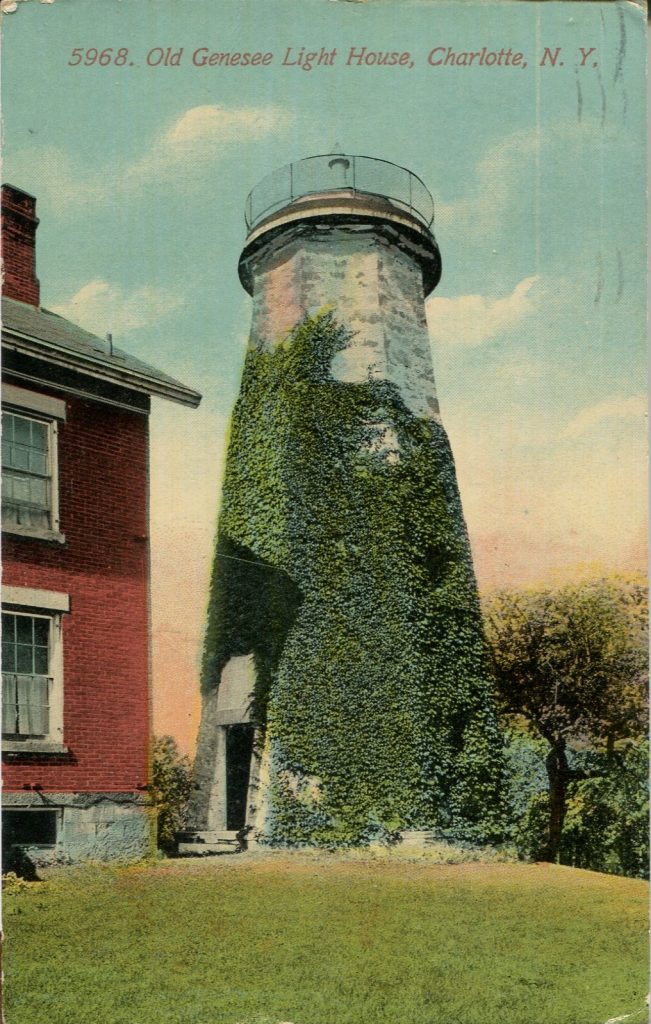 Salmon River, it is one of the few American lighthouses built by local contractors, although the Lake Ontario Lighthouse Superintendent sanctioned it. The stone came from a local quarry, the wrought iron railings were made by a local blacksmith. The lantern room is a wooden structure that sits atop a large fieldstone barn.

The old Genesee Lighthouse near Charlotte, New York, will celebrate its bicentennial this year.  When constructed in 1822, the lantern room was equipped with ten whale oil Argand lights. (An Argand is a lamp from the 1780s invented by Aimé Argand that produces a brighter light due to the complete combustion of the wick and oil.) The 40 feet tower proudly guards the mouth of the Genesee River. Today the light is the property of the Genesee Lighthouse Historical Society.

The Barcelona Lighthouse served the sailors on Lake Erie for only thirty years, from 1829 to 1859. Still, the lighthouse and the village of Westfield figure prominently in the history of Chautauqua County, New York.

The lighthouse was the first in the world to be powered by natural gas and in 1897 Dr. Charles Welch (of Welch’s Grape Juice fame) moved his company from Vineland, New Jersey to Westfield where he found an ideal climate for growing Concord grapes.

Today the lighthouse still stands on East Lake Road in Westfield and is owned by the New York Parks department.

There has been a lighthouse on this Point since 1826, but the current tower was not lit until 1875. A keeper was on duty here until automation in 1960.

The foundation was built with dressed granite, but the lighthouse is rubblestone encased in brick. (Rubble stone is broken rock of irregular size, shape and texture. Also known as riprap.) The tower is square. The lantern room was equipped with a third order Fresnel lens in 1857. It is still in use. 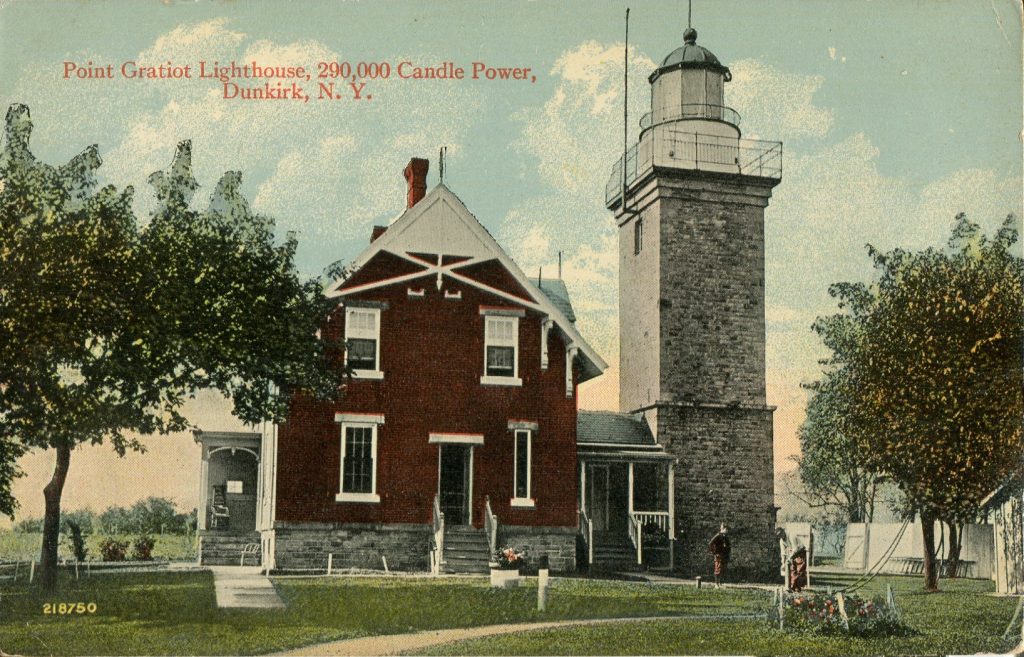 Lake Huron is the second largest of the Great Lakes and takes its name from the Huron, local indigenous people who greeted the early French explorers.

(If you are contemplating the purchase of a Presque Isle Lighthouse card and the newness of the lighthouse is not mentioned, count the windows. The old light has but one window; the new light has four and a series of portholes at the top.) 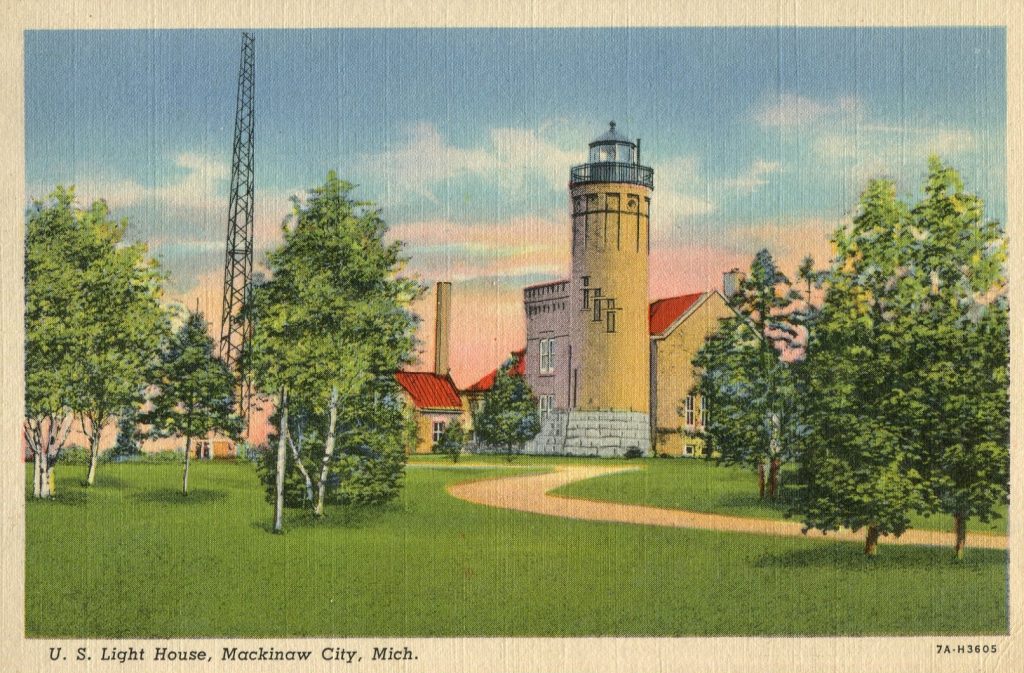 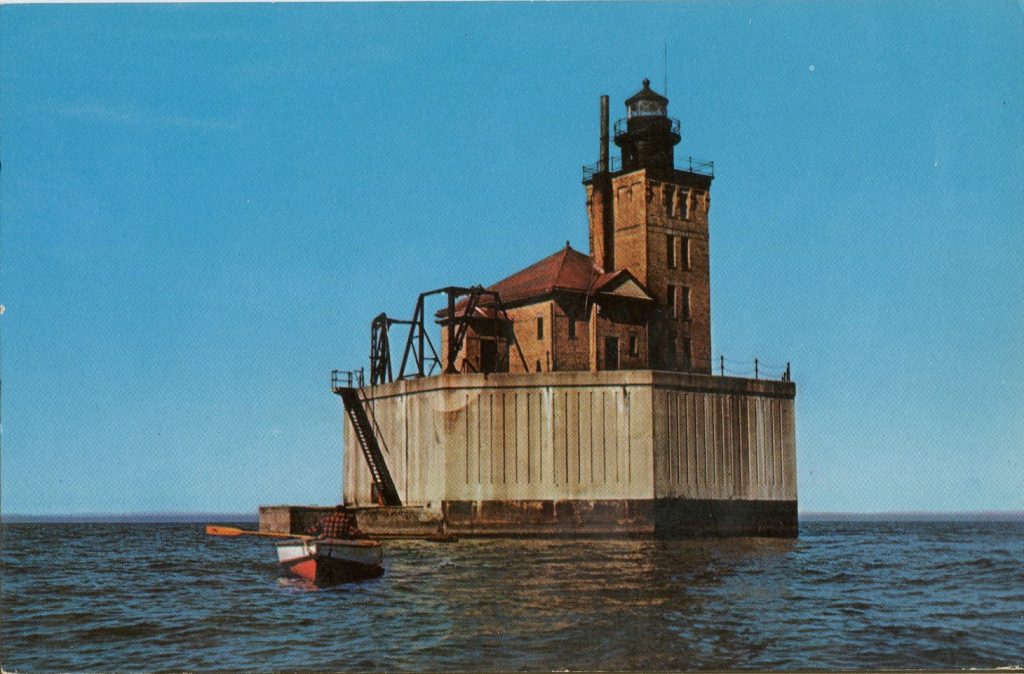 The U. S. Light at Mackinaw City, Michigan, marks the point at which Lake Huron becomes Lake Michigan. At 62 feet tall it was built in 1892 and served until 1957. Today the tower is open to the public, but admission is through the 1907 Fog Signal Building which is the home of the lighthouse museum and gift shop.

Port Austin Reef Light (above, right) sits atop a rock shoal, two-and-a half miles off Lake Huron’s south shore just north of Port Austin, Michigan. (Those who liken the shape of Michigan as the back of a left-hand, could locate the city of Port Austin at the tip of the thumb.)

First lit in 1878 and modified in 1899, it is fabled as the most important lighthouse on Lake Huron. The light is still operational but until 1990 was otherwise abandoned. It was then that a volunteer group engaged in a “heroic effort” to oust a colony of seagulls that had taken over the building. The score: volunteers (1), seagulls (0). The volunteers then undertook some screening and reroofing. Other restoration efforts since have included decking covered with galvanized metal shingles that were painted bright red that is historically accurate, new railings affixed to the access ladder, and the replacement of all safety chains. Current restoration continues by the Port Austin Reef Light Association. 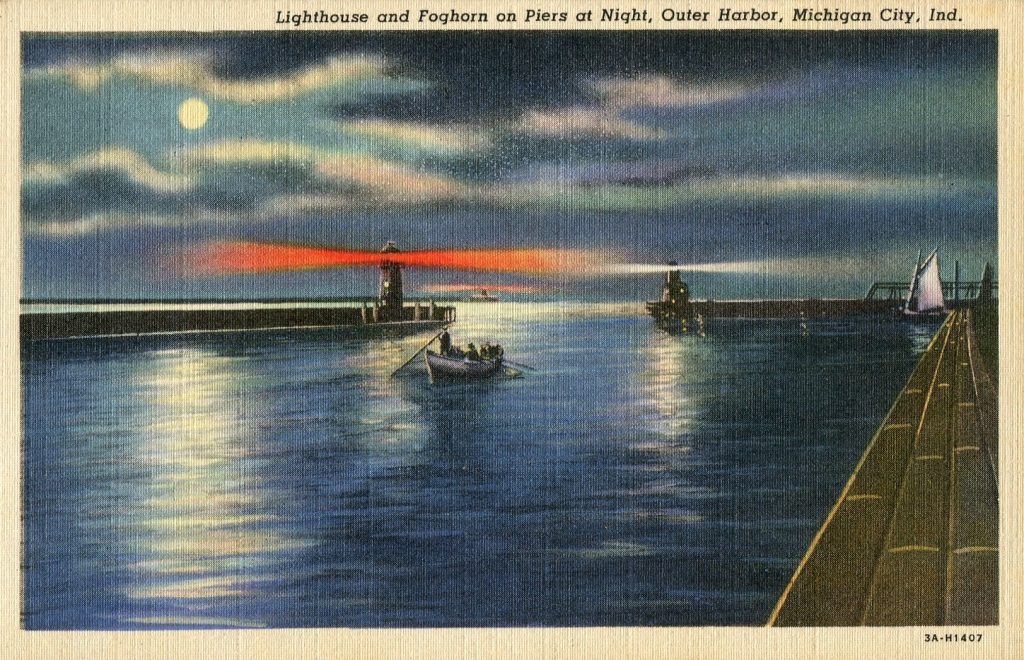 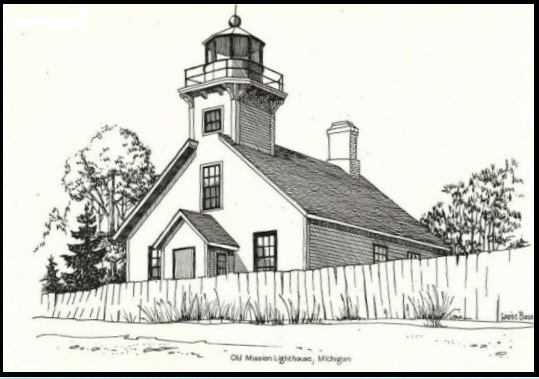 There has been a lighthouse in Michigan City, Indiana, for 170 years. This Breakwater Lighthouse is located in the city’s harbor at the end of a recently extended pier. This is one of three Great Lakes lighthouses to which the average visitor can walk. The iron walkway that is part of the pier can be seen in the Coast Guard photo below.

The pen and ink drawing of Mission Point, Michigan, Lighthouse renders all the charm that most visitors crave. Mission Point Light is located at the end of Old Mission Point, a peninsula in Grand Traverse Bay, just a few miles north of Traverse City.

The structure was erected in 1870, made of wood and painted white with black trim, so the image on this postcard is more exact than expected. The latitudinal location of Mission Point is North 44° 59’ – just a hundred feet short of being halfway between the equator and the north pole. 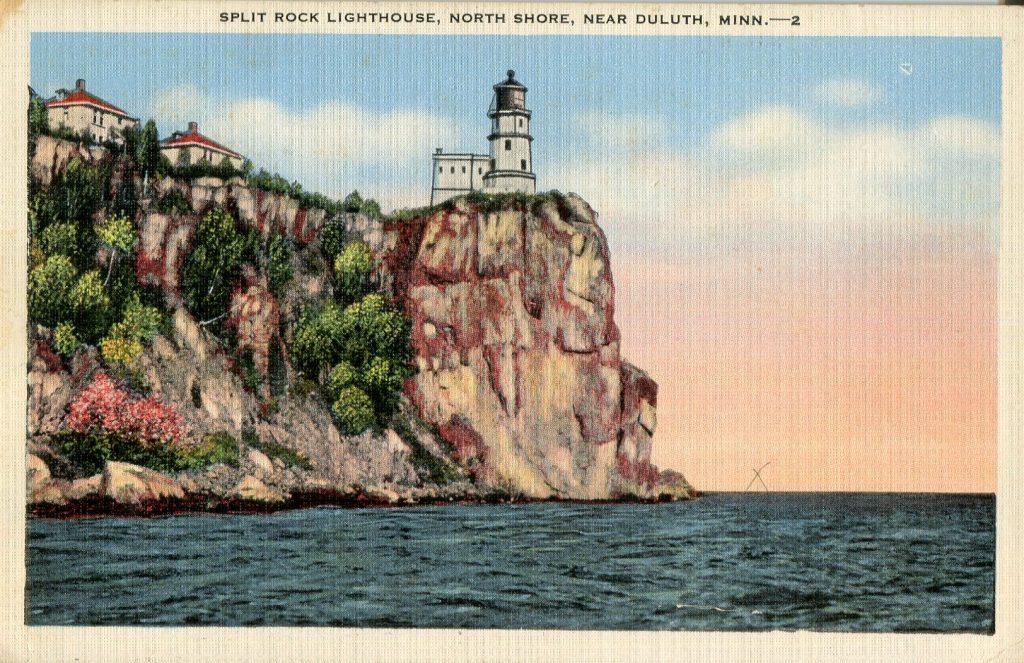 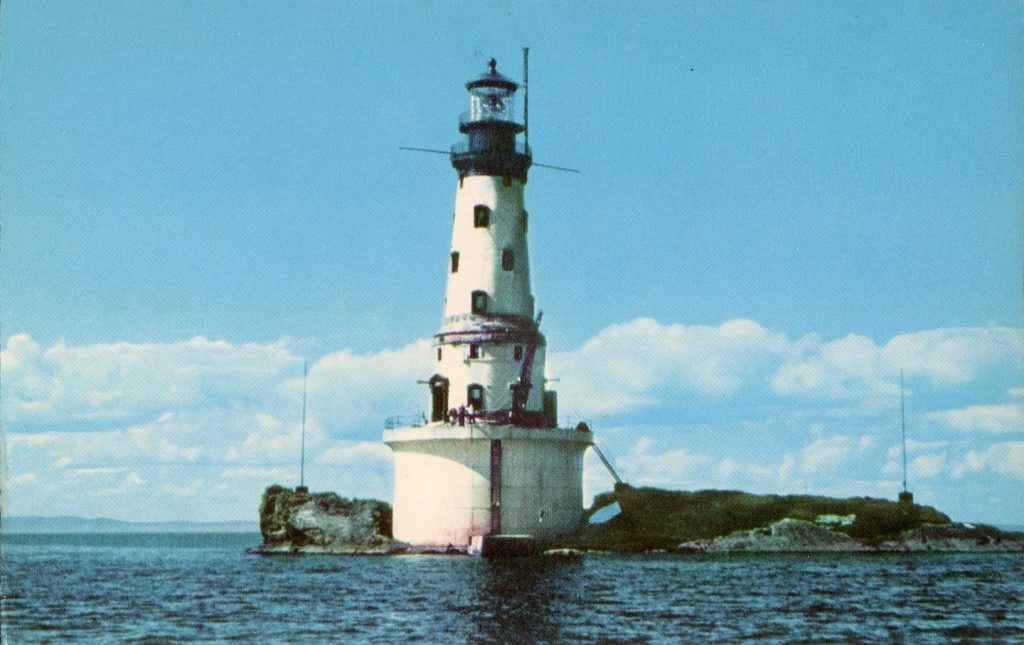 Split Rock Lighthouse is but one of the seventy-eight navigational facilities on Lake Superior. It is a majestic place high above the water level just south of Silver Bay, Minnesota. Build in 1910 at a cost of $75,000, it has been called the most picturesque lighthouse in America. In the five-year period prior, an astonishing total of 29 ships, mostly United State Steel ore carriers were lost, which prompted the author James O. Curwood to call this part of Lake Superior the most dangerous piece of water in the world.

Rock of Ages Island and Lighthouse (above, right) is atop the Rock of Ages reef just five miles off the north tip of Isle Royal, Michigan. It is the tallest lighthouse of the Isle Royale quartet, built on a 50-foot by 200-foot rocky outcrop.

The Rock of Ages reef had claimed two sizable ships, one in 1877 and another in 1898, demonstrating the immediate need for action. When the steel frame and brick tower was completed in 1908, the lantern room was equipped with the most modern light assembly available. At full illumination, the Rock of Ages light emits 940,000 candlepower. A four-member crew served the lighthouse until 1977.

In 1975 the light tower was resurfaced and whitewashed, as is shown on the postcard here.

Split Rock Lighthouse as seen from the driveway at the top of the bluff over Lake Superior.

The Staff of Postcard History offers this article for your enjoyment. It is a combined effort of many: our publisher, editor, webmaster and collectors/contributors far and wide. Please use the COMMENTS feature below to let us know how we're doing.
PrevPreviousPostcard Advertising – National Union Radio Tubes
NextThe Kiwi, a Unique Feathered FriendNext
3 Comments
Oldest
Newest Most Voted
Inline Feedbacks
View all comments
Robert E Gardner

Excellent article on Great Lakes Lighthouses, (although I don’t know how he could have left off Marblehead Lake Erie) I have always wanted to go around the Great Lakes to photograph the lighthouses but after reading that it would be a 11,000 [mile] trip, I have decided to leave that to another lifetime. Thank You for this article and the others, they continue to bring me the history and story of the world through Post Cards.

I knew a couple of collectors who specialized in postcards of Great Lakes ships, which leads me to wonder how many cards feature both an identifiable ship and a lighthouse within the view.

There were several Lightships on the Great Lakes; both in the US And Canadian sides. The Huron is preserved at Port Huron. She appears on several postcards.