Real Photos of a Greek Family

My father’s family emigrated from Greece in the early 1900s. They came to the United States and became copper miners in Ely, Nevada. Most early Greek immigrants were single men who planned to return to Greece after they made enough money. Later, Greek women, called picture brides, because the men received pictures of them and that was how they chose their wives came to America. My grandfather Alexander’s second wife was a picture bride. She was sent by her family to marry Alexander without having met him.

My father was the only child of my grandfather’s first marriage. He was not always open about discussing family history, so after he and my mother died, I was surprised to find a large collection of old real photo postcards in a box of their papers.

The first thing I noticed about the postcards is that the same names, written on the backs pop up often, popular Greek names like George and Alexander. Which is neat to me because my sisters were named Georgia and Alexandra because these names came down from my dad’s family. Names of the people on the cards written on them being family names and my Greek heritage made me interested in them. I want to know more about these postcards and find out the story behind them.

I love the stories postcards tell and it is my reason for collecting them. The hidden stories of these, however, will remain hidden because I don’t know anyone who remembers who these people were, and most of what is written on them is in Greek which I can’t read.

What I can tell is that these cards are real photo cards. (Photographs developed on postcard paper.) People could go to a photographer’s studio to have their picture taken or take a negative to any place that made real photo postcards. There were many such places.

Most cards in this collection seem to be posed by professional photographers. Most have either men or women together, few of them show men and women, and the ones that do are older and are casual images from an event like a picnic or party. I believe these to be from Greece.

Only one shows a family made up of a father, mother and their children and there are a few of men, women and children by themselves. There is also a wonderful one with a father with his son on his knee. I love how on these cards everyone is well dressed in wonderful outfits of the time. The men and women are all very good looking, strong and proud. The clothes worn in the pictures offer clues to the years the pictures were taken – possibly they are from the 1920s.

One of my favorites is the one of two young women dressed in lovely flapper-era dresses and have on a little too much makeup. On the back is written “Irene and a friend.”

Irene shows up again on another card which has her and a different girl standing with an older woman who is sitting down. The older woman wears widow’s clothing which at the time Greek women would wear from the time of her husband’s death until their own passing.

On the back of the card are the names Irene, Olga and one name that is unreadable. Another interesting card is of a stern looking man in a military uniform. He has many metals on his chest and a toothbrush mustache, the type that most people now associate with Hitler. The card is dated 1928. 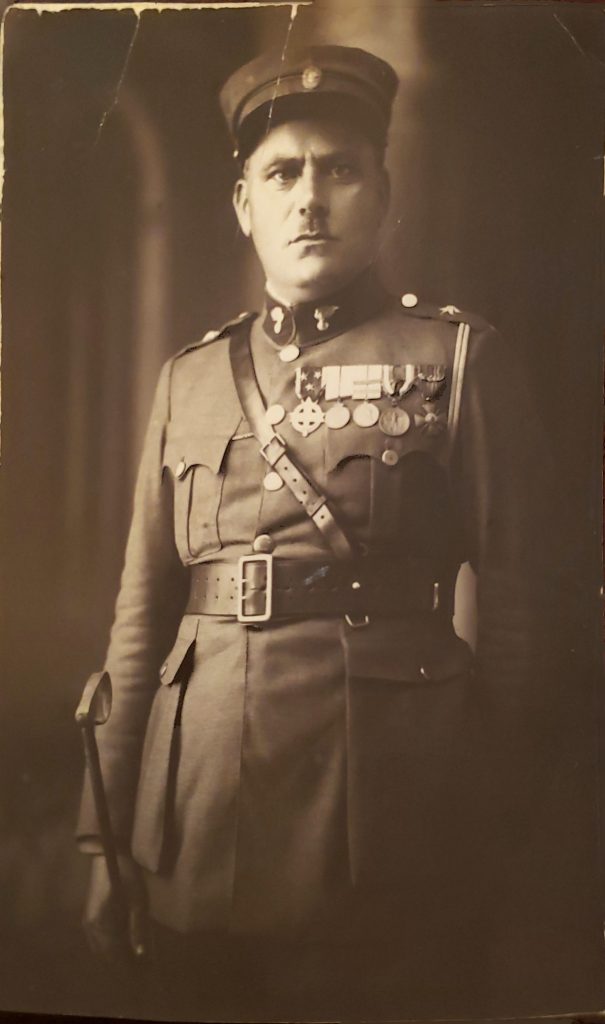 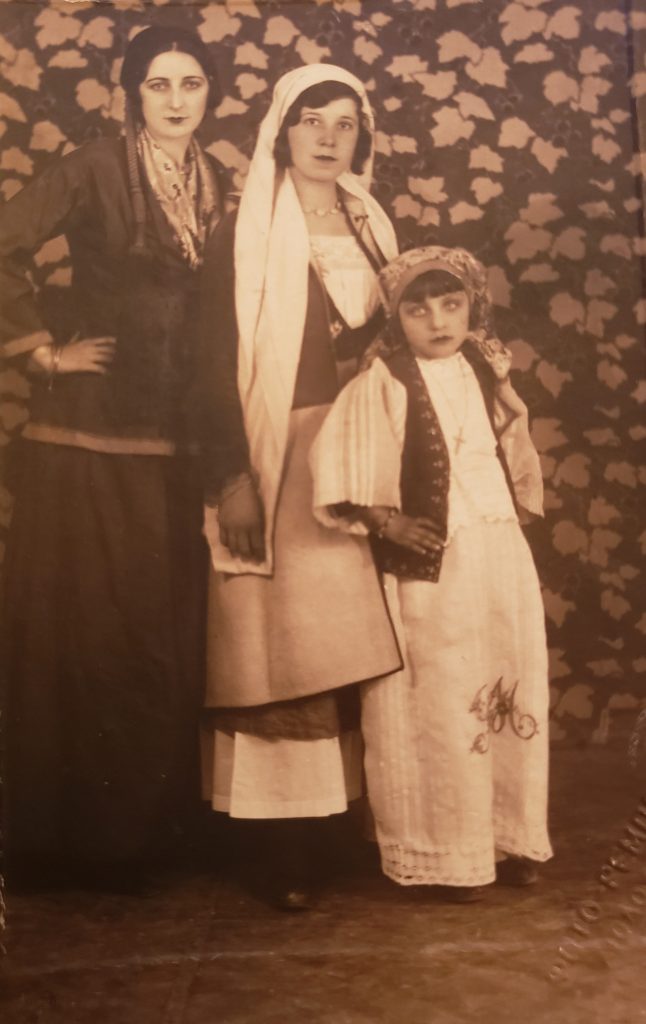 A couple of the postcards show women dressed in traditional Greek folk dresses; the kind worn by members of Greek dance groups that perform at festivals sponsored by Greek orthodox churches. One shows two pretty girls dressed in folk outfits with an older lady dressed very modern for the time. Could she be the mother of the two younger ones? You can see the youngest girl is wearing a cross that may have been a baptismal present.

It is unfortunate that so much family history is lost to us. I was happy to find these cards before they were thrown away or put in a place never again to see the light of day. They have shown me history I never saw clearly.

Perhaps, I should learn Greek.

"Tex" Velis is a collector who loves the stories told by old postcards. Her tales are inspirations to collectors who wish that more history could be found on the backs of real photo postcards.
PrevPreviousThe Great Flood of 1903
NextAn Ode to the Places We EatNext
4 Comments
Oldest
Newest Most Voted
Inline Feedbacks
View all comments
Mary Irvine

Beautiful postcards, thank you for sharing them with us. I too started collecting as a result of inheriting some from my grandparents.

The black clothes worn by a woman following the death of her husband were often referred to as “widow’s weeds”.

I believe the woman on the left, in the last image of the three women, is Irene. Her features are identical to those in the other two images of her.

If you scan the back of the photos too. Google Lens may be able to translate the text for you. Enjoy the collection. They are beautiful. Thank you for sharing!