A flood is the one natural calamity that man can successfully engage and defeat in a battle, but one instance where neither nature nor man could claim victory was the flood that ravaged the Upper Mississippi Valley in the spring of 1903.

Documented from beginning to end on postcards, this catastrophe demonstrated why the Mississippi was known to many who lived along its banks as Old Devil River.

The area that has always been the most vulnerable to flood damage on the Upper Mississippi is a 100-mile strip called the Great American Bottom. An alluvial floodplain, the Great American Bottom runs along the river’s east bank between Grafton and Chester, Illinois. This lowland area had been visited by two monumental floods in 1785 and 1844, but the damage inflicted was minor because it was so sparsely settled. Farms started to sprout here in the latter half of the 19th century after entrepreneurs from across the river in St. Louis began erecting manufacturing plants along this corridor. By 1900, there were approximately 100,000 people living in the American Bottom, a third of whom resided in East St. Louis, Illinois, where a great drama was about to unfold.

In late March 1903, as they do every year, rain clouds darkened the skies of the Upper Mississippi Basin. However, unlike a typical spring the rain never let up, and by the end of April, the many tributaries that feed the Mississippi were over their banks. Rain kept pelting the Upper Midwest during the first two weeks of May, and the only question was the magnitude of the flood that was about to occur.

The damage being inflicted on towns upriver exceeded the most dire predictions, and then on June 1, flood waters reached the Great American Bottom. Between Alton, Illinois, and East St. Louis, the river had swollen to form a lake five to seven miles wide. Many of the smaller, low-lying communities, which could put up no defense against the river, were abandoned en masse. On June 2, the St. Louis Post Dispatch carried the first of what would be a long litany of tragedies: the story of a mother drowning along with two of her children while trying to escape from an island.

The situation in East St. Louis had gone from serious to one of desperation. Holding back the water that was rising at a rate of two feet per day was a ten-mile-long dike that was beginning to crumble. Fighting to protect their homes and businesses, residents worked around the clock packing the dike with sandbags.

The enormity of the challenge they faced is graphically illustrated on a postcard of the Eads Bridge, which links East St. Louis to St. Louis.

When this view was taken, the river had risen to a point where steamboats, as they passed under, were almost touching the structure’s steel frame. What makes this card doubly interesting is that it shows, although not all that distinctly, hundreds of people standing on the deck of the bridge. Throughout the crisis, residents of St. Louis gathered here to watch the intense struggle that was taking place.

On June 7 the situation facing East St. Louis became more grim. Two miles to the north the dike gave way, and the town of Venice was under 15 feet of water. All railroad service to East St. Louis was severed, and thousands of people began streaming out of the city. Most of those who fled scrambled across the Eads Bridge to seek out refuge in St. Louis.

Even as the water continued its ominous rise, many residents refused to flee, choosing instead to move with their belongings to the upper stories of their homes. Cognizant of what his city was up against, the mayor of East St. Louis ordered the suspension of all business activity on June 8. Ever hopeful, volunteers continued the toilsome task of lifting sandbags onto the dikes.

When the Mississippi River finally crested at 38 feet on June 10, large sections of the East St. Louis dike collapsed, and a torrent of water surged into the city. Within minutes a third of this community was submerged under five to ten feet of water. The awesome power of surging water is made manifest in a view of a railroad relay station. Littered with debris, the station had been a key fortification point in the battle to hold back the flood. 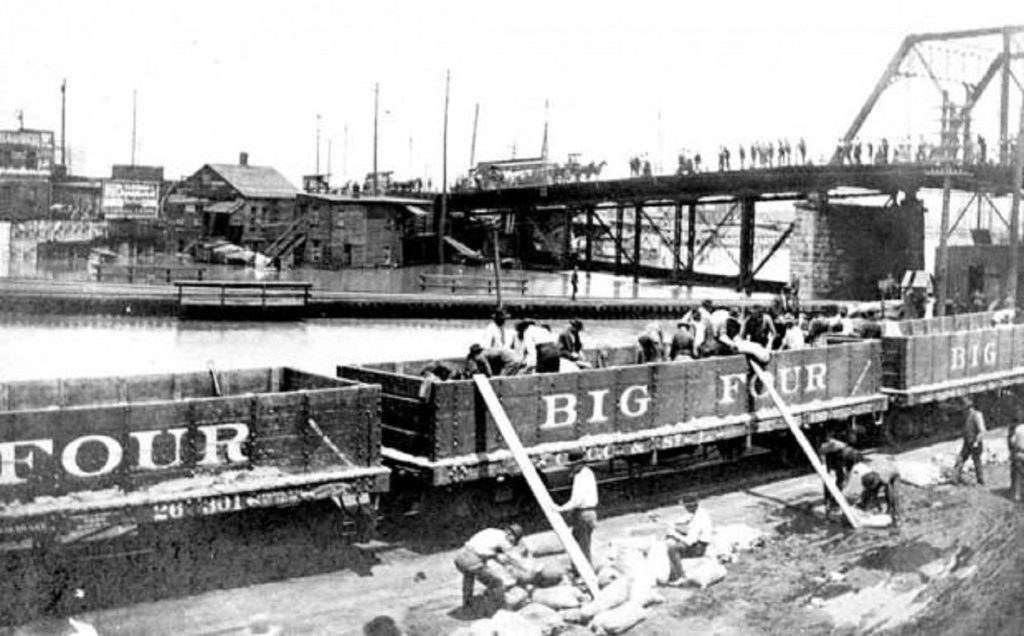 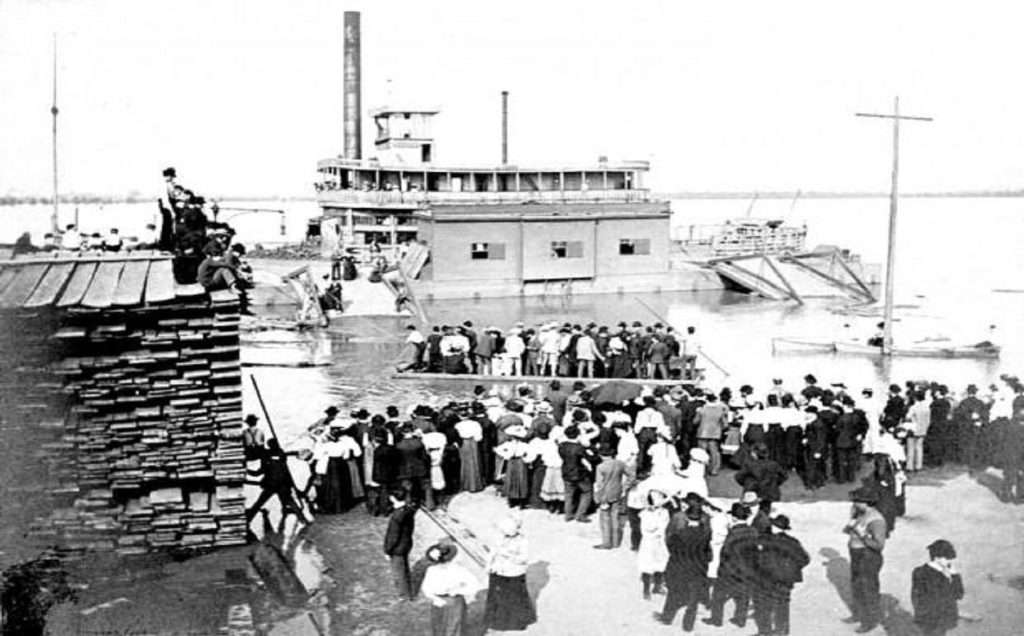 Residents of East St. Louis could console themselves with the fact that flooding was confined primarily to the downtown business district and the south end of town. Other sections were spared damage because the streets in those areas were graded higher.

During this time, East St. Louis was a scene of utter desolation. The only thing moving was a battery of rowboats looking for stragglers and collecting valuable debris. Occasionally, the discomforting silence was broken by the howls of a dying animal.

The siege was finally broken on June 12 when the Mississippi began to slowly recede. In its wake was left a town where losses were astronomical. Nearly every business in East St. Louis sustained some type of damage, and many of them never reopened. Hundreds of homes had to be abandoned, beginning a cycle of poverty which East St. Louis has never overcome.

The one positive to come out of this great tragedy was that steps were finally taken to ward off any future floods. Over the next decade, a 26,400-foot-long canal was built, which features a complex system of dikes and levees. The cost for the project designed to protect East St. Louis and several adjoining communities came to $6,500,000.

It has proven to be money well spent, because throughout the last several decades, East St. Louis has not experienced any serious flooding. At least in this one instance, man can justifiably claim victory over the forces of nature.

Having been through East St. Louis, I was painfully aware of its poverty, but didn’t realize that a devastating flood bore some of the responsibility for that sad reality.

I had never heard of this. Thanks for sharing more of history.

And the way blacks were treated during the flood was a causative factor in the Great Migration northward.

My Step-grandfather John Mason Holler was born in a rowboat during this flood in East St. Louis.