In the 1880s, George Washington Vanderbilt II began visiting the Asheville, North Carolina mountains. His visits made him fall in love with the scenery, climate, and location. He decided to build a summer house in the area. He named his “little mountain escape” Biltmore from “DeBilt” (his ancestors place of origin) and “moor” (Anglo-Saxon for open, rolling land).

Vanderbilt bought close to 700 parcels of land totaling almost 100,000 acres.  Construction began in 1889. To facilitate construction of the Richard Morris Hunt designed house, a woodworking factory had to be built along with a brick kiln that could produce 32,000 bricks a day, and a three-mile railroad spur had to be built from Asheville to take construction materials to the site. Building the main house required a labor force of a thousand workers and sixty stone masons. The project was so vast, it was enough to fill the new town of Biltmore. Biltmore, the town, was built to support Biltmore, the estate.

Mr. Vanderbilt made numerous trips overseas to buy thousands of furnishings for the house, including tapestries, carpets, prints, linens, and decorative objects dating from the 15th century to the late 19th century. 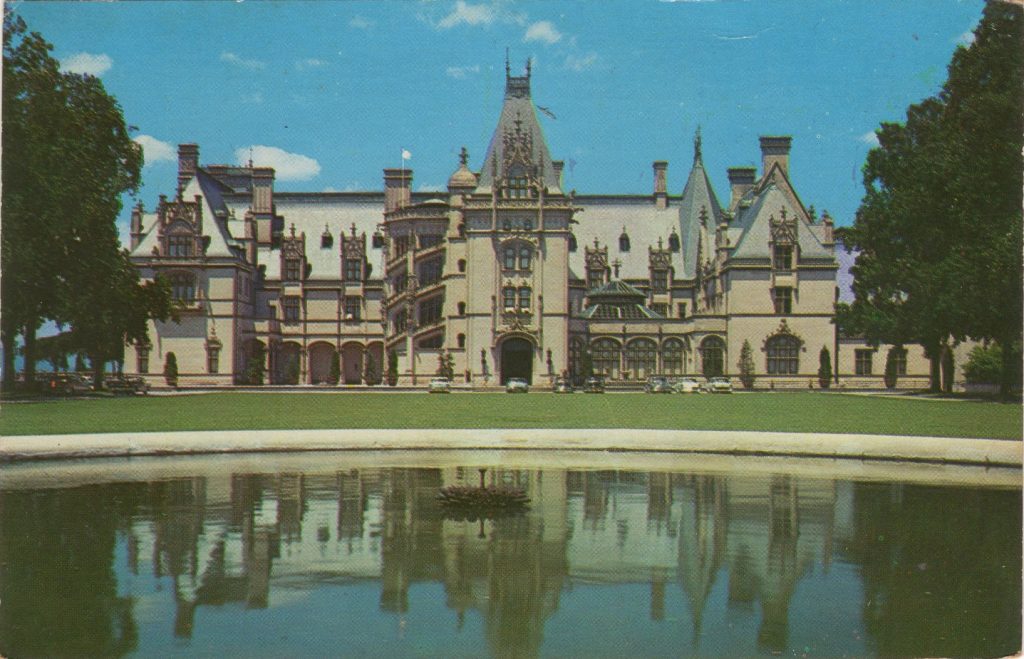 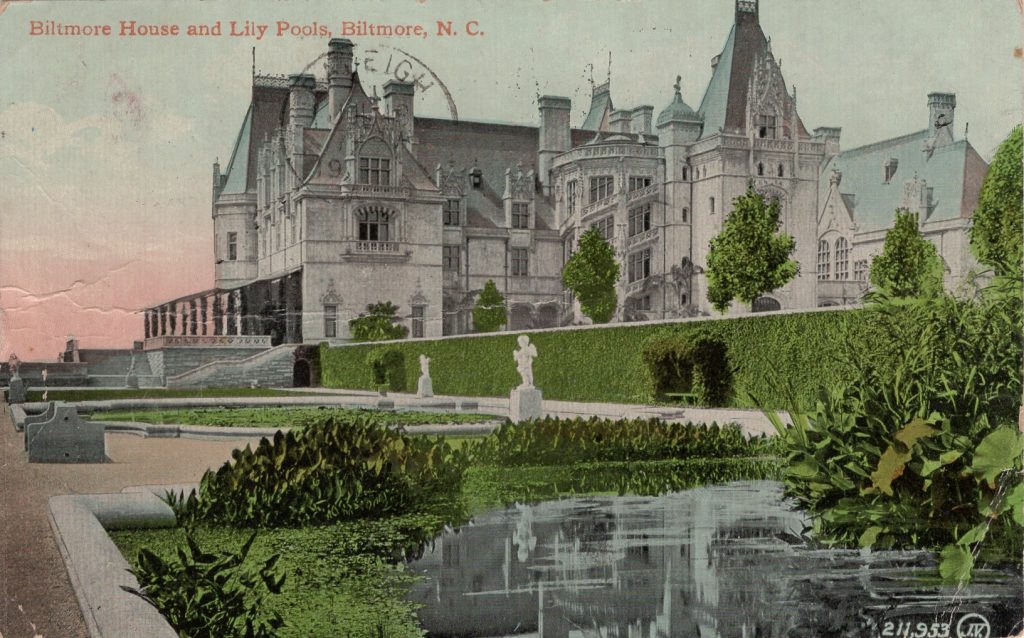 George Vanderbilt opened the estate as an unmarried gentleman on Christmas Eve 1895. Family and friends from across the country attended the event.

George would marry Edith Stuyvesant Dresser in 1898. They would have one child born at Biltmore in 1900, who was named Cornelia Stuyvesant Vanderbilt. Cornelia would grow up on the estate.

It is estimated that Vanderbilt spent much of his inheritance on the construction of his home. With the Congressional passage of income tax and estate expenses, Vanderbilt began the sale of 87,000 acres of his land to the Federal government. He died in 1914 and his wife closed the deal to sell the land for the use of Pisgah National Forest.

At Biltmore, the total house space is four acres. There are 250 rooms, 35 bedrooms, 43 bathrooms, 65 fireplaces, and three kitchens. The house was built with electricity because Vanderbilt knew Thomas Edison. 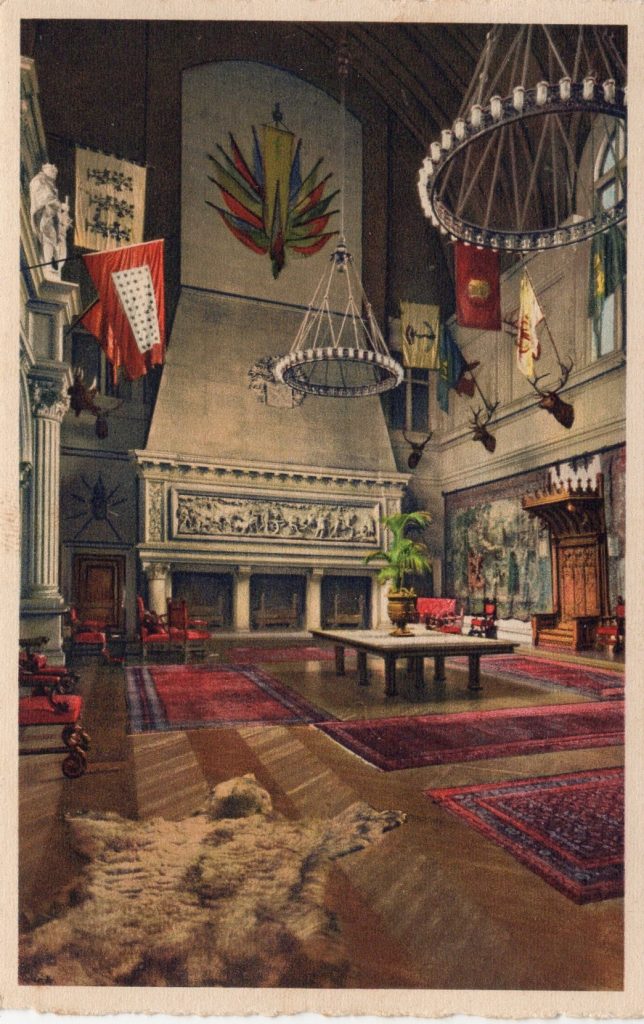 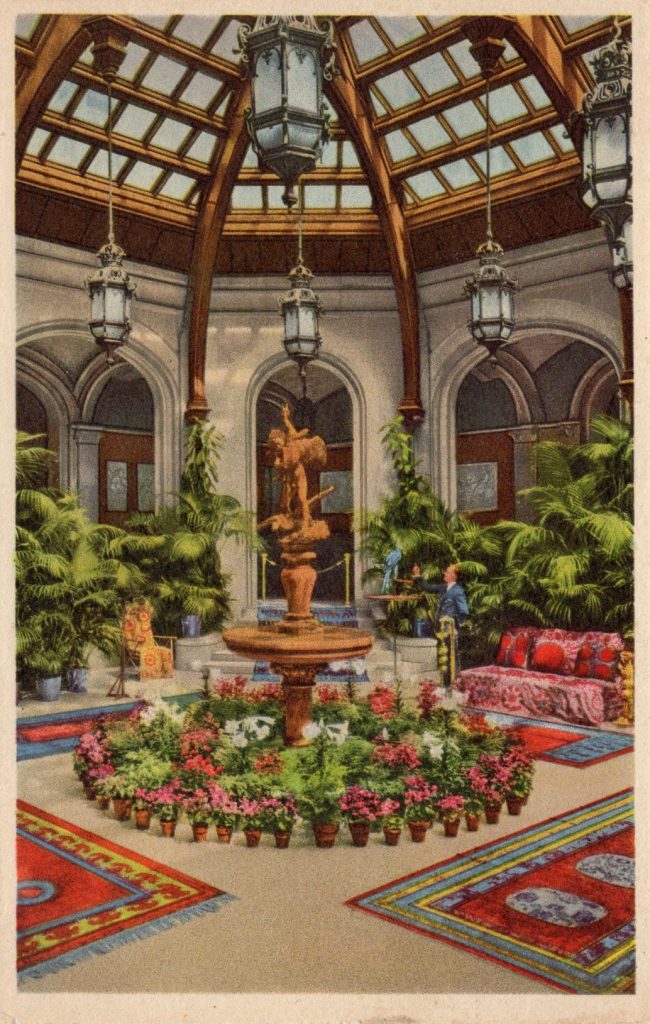 The banquet hall is the largest room, it measures 42 by 72 feet. The table has seating space for 64 guests. There is a 70-feet tall, vaulted ceiling. To the left of the entrance is the tapestry room that is 90 feet long. The library is two stories and holds 10,000 titles in eight languages. 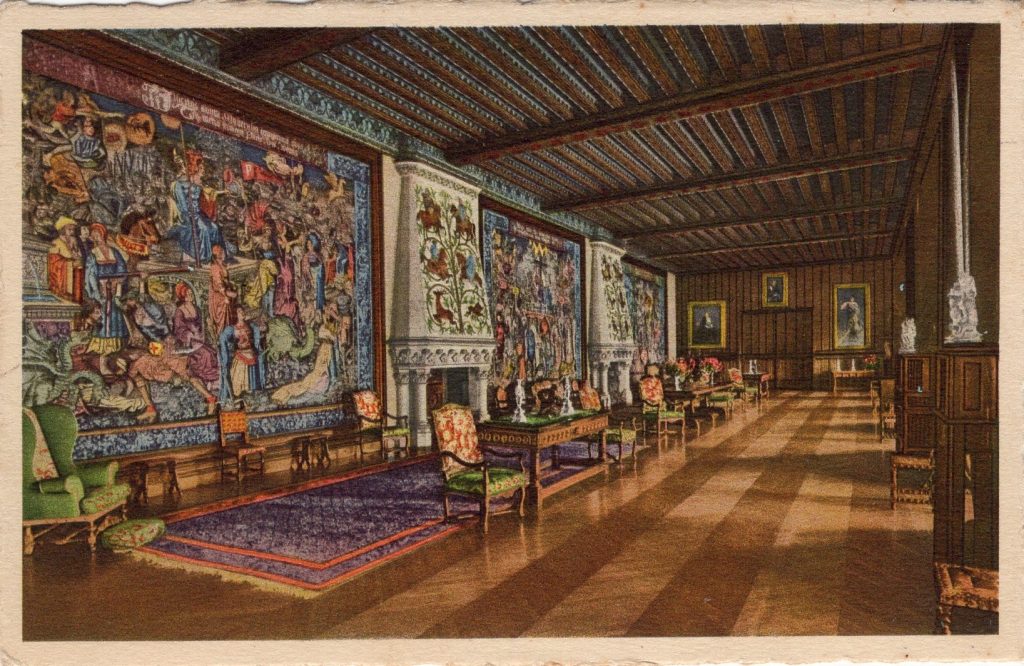 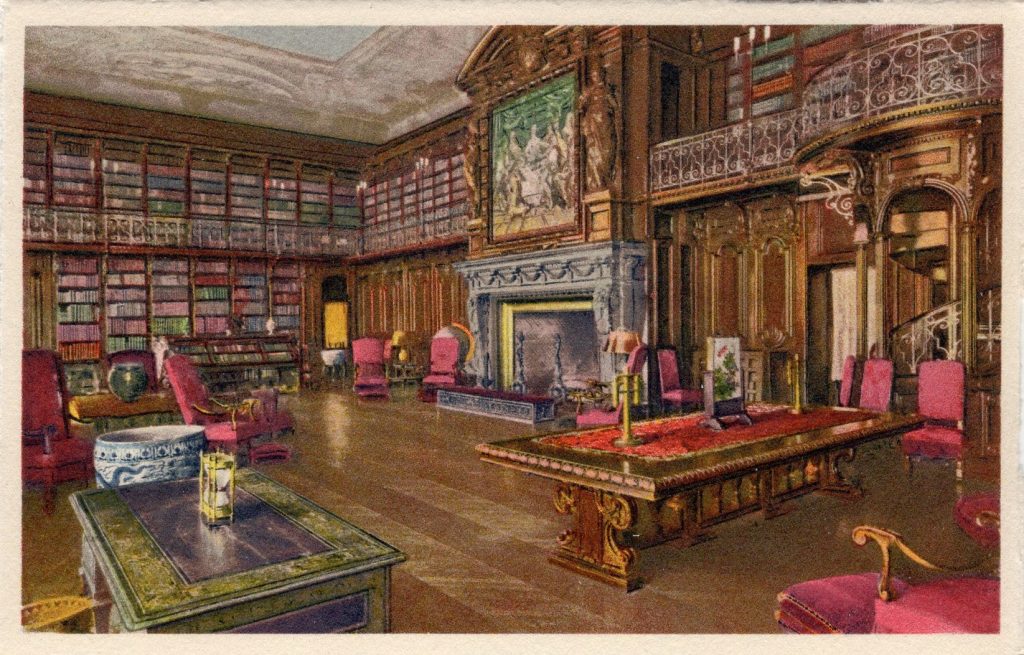 The third floor has guest rooms and the fourth floor has 21 bedrooms for female servants. The male staff was housed in rooms over the stable complex.

The basement at Biltmore holds several activity rooms, it is the largest basement area in the country. The activity rooms hold a 70,000-gallon heated swimming pool with underwater lighting, a bowling alley, and a gymnasium. Also, the main kitchen, the pastry kitchen, and the rotisserie kitchen. There are walk-in refrigerators and the servants’ dining hall, laundry rooms, and additional staff bedrooms. 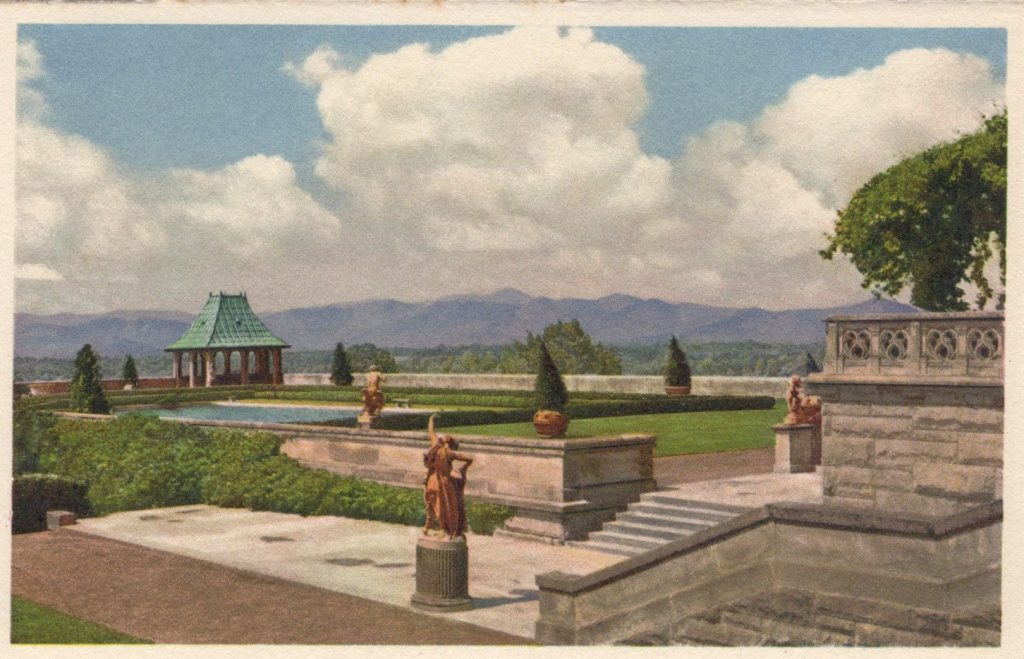 The estate was planned as a facility that would be self-supporting. One of the profit centers was Biltmore Dairy Farm. As a child, I can remember milk being delivered to my home more than 100 miles away from Biltmore Dairy.

The Biltmore Company is one of the largest employers in Asheville. The dairy barns were turned into the Biltmore winery in 1985. Two new luxury hotels have been built on the estate, and the property tax value today is $157-million. 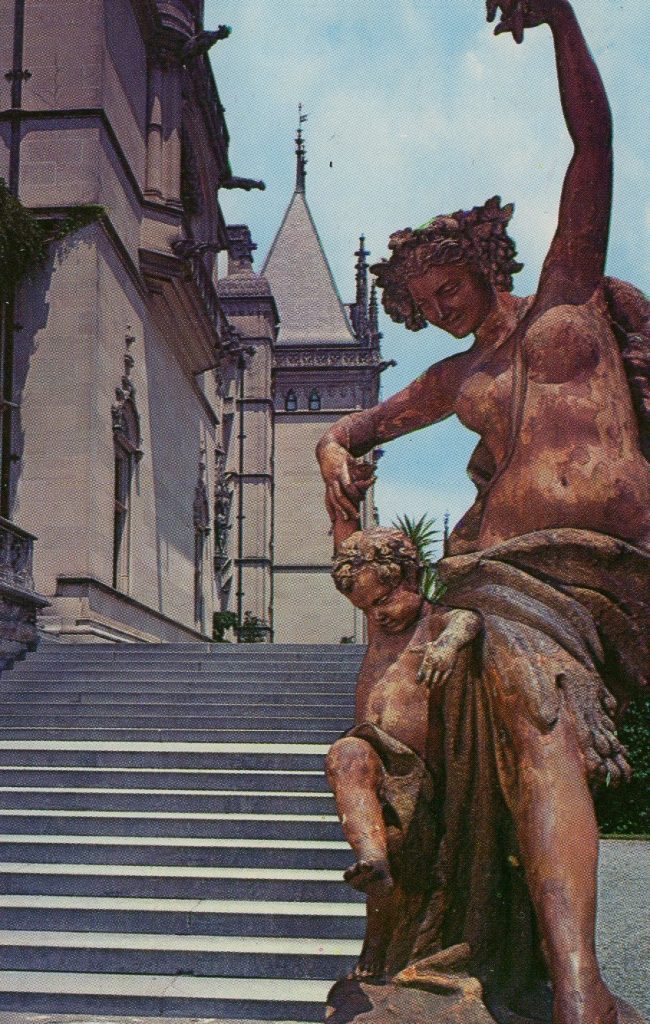 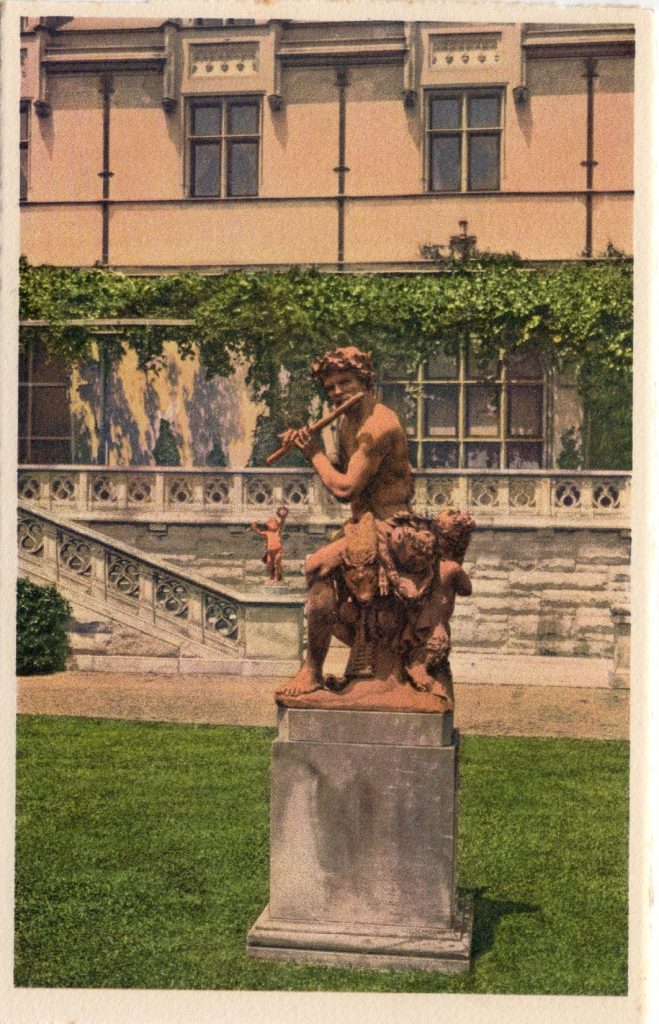 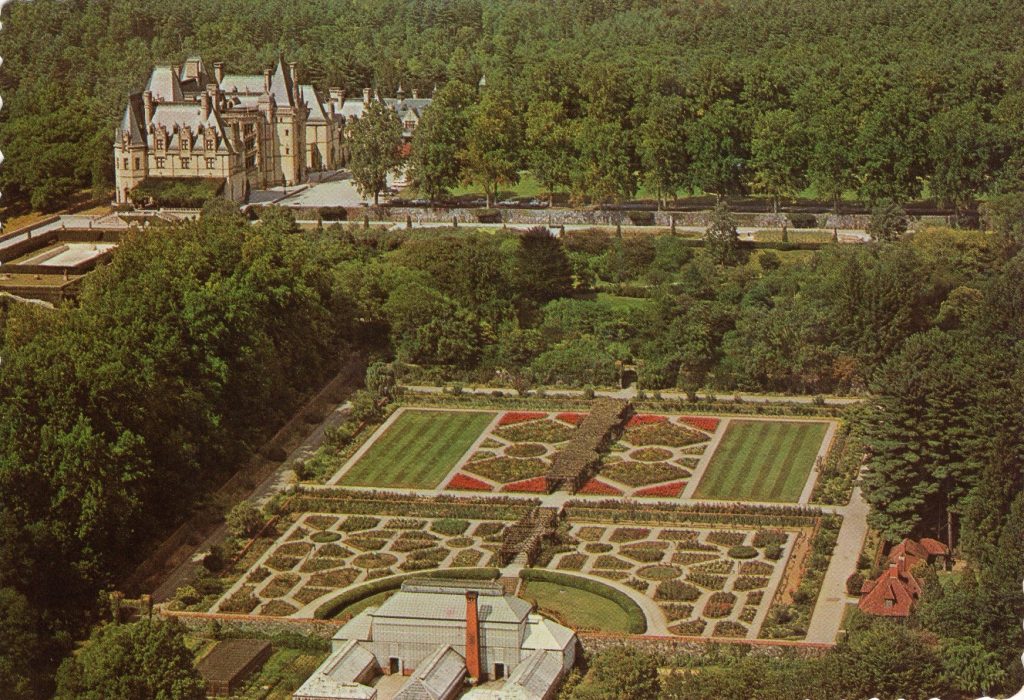 The estate is one of North Carolina’s most popular tourist attractions.

Tony Crumbley has been a collector of stamps and postal history since childhood. He has authored numerous articles over his career as a philatelist. He is the current Co-Editor of the North Carolina Postal History Journal, a job he has had for over 25 years. He is a General in the Civil War Philatelic Society where he served as president. He lives with his wife, Renea, in Charlotte, North Carolina, and is the retired Vice President of Research for the Charlotte Chamber of Commerce.
PrevPreviousThe Farmers Who Made Clocks
NextWelcome to the Postcard History United States Landmarks QuizNext
3 Comments
Oldest
Newest Most Voted
Inline Feedbacks
View all comments
Bob Kozak

Interesting that the female servants had better accommodations (at least in terms of location, in my opinion) than their male counterparts.

I have been fortunate enough to visit here twice. It took two visits and two tours for everything there is to see, to be seen! Well worth the visit when near and Asheville has a lot to see and enjoy as well!

I’ve got a Biltmore postcard packet listed on eBay if anyone is interested.
I didn’t even look through the postcards. I think I will dig it out of storage.
My listing assistant was the one that noticed that they had probably not ever been removed from the packet.
https://www.ebay.com/itm/255346721339
A total of 24 postcards. In the era of Biltmore House, Later Changing to Biltmore Hotel.
My best guess is: postcards are before Depression 1929/30
Feel free to comment. Thank you. Bruce Tjossem