The Farmers Who Made Clocks

Spillville, Iowa, located in the northeast corner of the state, is a place few would know – until yesterday, so to speak – except for the fact that many classical music enthusiasts know that Antonin Dvořák spent the summer of 1893 there and while in residence composed his monumental Symphony No. 9 in E Minor “From the New World.”

In fact, there is a second page in the American music history book that has the name Spillville in its text. Spillville was also the home of the Inwood Ballroom. Famous for its decagon (10-sided geometric polygon) dancefloor and its stone fireplaces. From soon after it was established in 1920 until just recently when it celebrated its centennial it has been a family and community gathering spot on the banks of the Turkey River and a favorite performance venue for the likes of Glenn Miller and Guy Lombardo.

In a paragraph above, I mentioned “yesterday,” that is when I discovered this postcard of the Bily Brothers: Joseph and Frank. Their name is pronounced, bee’-lee.

John (born in 1855) and Mary (1857) Bily were born in Czechoslovakia, but due to the intolerable governmental “reforms” of the era their families left their homeland for America. She in 1862 at age 5; he in 1870 at age 15. It may be that the two families traveled through Canada, where it may be that John and Mary met. They married in Spillville in January 1878 and apparently (as recorded in the 194o census) they bought a small farm valued at $850. They became naturalize American citizens in 1876. They had four children: Joseph, born in 1880 and Frank, born in 1884; then two daughters, Jan and Anna.

The sons proved early on that they were worthy of their keep. They were fast to learn the farm lifestyle. Neither son married before 1940, but there is some proof that Frank married while in his late fifties.

So, what do you do in the winter when the snow is deep? There is no farming to do, the library is too far to walk in the snow, and all the house chores are finished. Who knows if it happened this way, but it could be that Joseph said to his younger brother, “Frank, let’s make a clock.”

They were both accomplished wood carvers and they chose to make their clocks out of wood. The first one took them three winters to finish, and in the years that followed they carved another twenty clocks.

Since most of the music-minded tourists visit the Antonin Dvořák exhibit, they find it on the second floor of a building that houses the Bily Clocks Museum on the ground floor. The Bily clocks are a traveler’s bonus thoroughly enjoyed.

The hand-carved clocks depict the history and culture, art, and the Catholic faith with exquisite imagery since they are adorned with dozens of hand-crafted figurines. Some of the clocks stand more than eight feet tall.

It should be noted that the brother’s clocks are still in the Bily Clocks Museum. They never sold their clocks, and none will ever be sold. Currently they are the property of the city of Spillville.

The Bily brothers, in addition to being successful farmers, good business men, talented wood carvers and expert clock makers, also had the good fortune to be born into a family of long-lived people. Their mother lived to be 92, Joseph lived until age 89, and Frank died at 81. The brothers are buried in St. Wenceslaus Cemetery in Spillville.

I searched, but regrettably was unable to find postcards of the clocks, but I have some fairly good dealer contacts who I occasionally call from Postcard History’s editor’s desk. Two friends of Postcard History have emailed me scans of the real photo cards below:

From Connecticut there is a card of the Antonin Dvořák honorary violin clock and the Bily Brother’s version of a Swedish Hunt Clock: 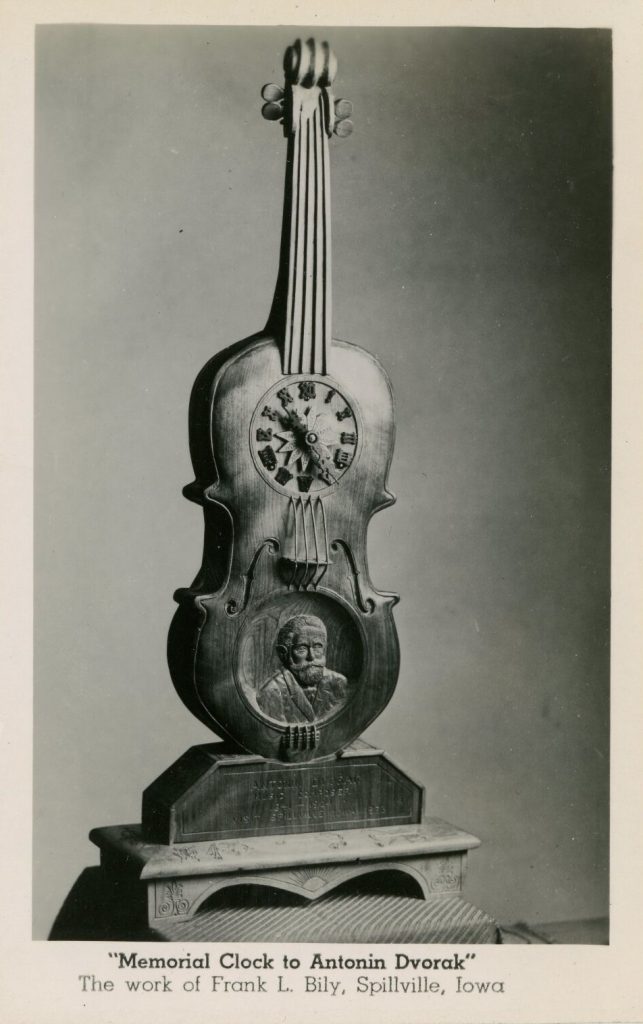 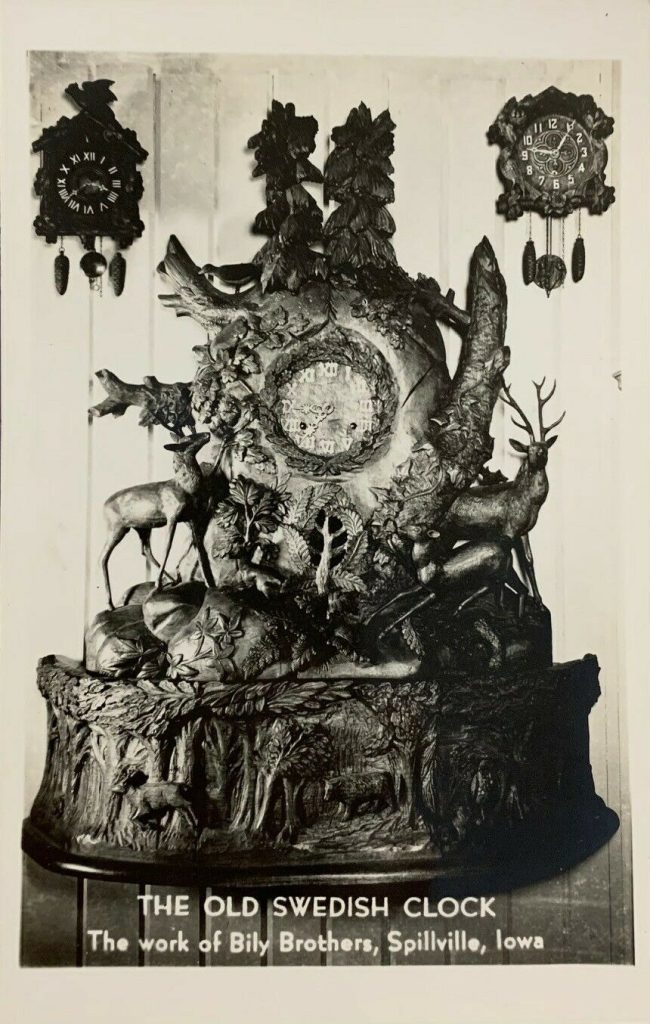 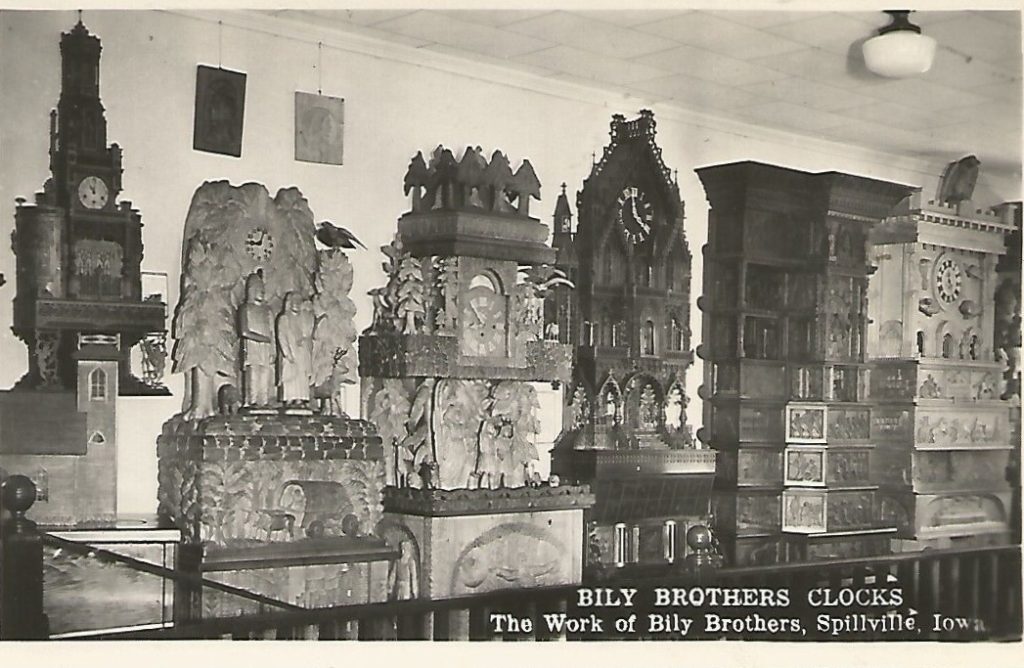 And from Tennessee, I received this real photo

of what may be a spot inside the Iowa museum.

Does this story make you want to ask, “Why did anyone need to know what time it was in the middle of a 1920s winter?”

Ray Hahn is a retired educator, but he has never stopped teaching. His decades of researching, writing and editing a newsletter for the South Jersey Postcard Club has been a world-class education in trivia. In addition to postcard collecting, Ray’s other interests include history, genealogy, and touring the world with his wife Marie. Ray often advises his readers to "Join me as we explore the world one postcard at a time." Ray and Marie live in New Jersey.
PrevPreviousA Fifth Sunday Special – (Part I of Year 2)
NextThe Biltmore Estate – America’s Largest Privately Owned HomeNext
4 Comments
Oldest
Newest Most Voted
Inline Feedbacks
View all comments
Walter Spector

This a very interesting article. You have been able to combine all of your research and genealogical skills.

Since I’m of Czech ancestry, my dad made me aware of Dvorak and the Bily clocks while I was a youngster.

I enjoyed seeing the carved clock cases. I wonder if the interior works were also hand carved wood.

Fascinating. I can’t believe how elaborate the clocks were