This, “Is blue your favourite colour?” was published by the British publisher Bamforth & Co. and is the work of the artist Douglas Tempest. The word prolific can also be used in respect to Tempest’s output. He joined Bamforth in 1912 and was still illustrating cards for them when he died in 1954. Most collectors are not fans of all of Tempest’s work although many of his World War One are amongst his best.

This card asks a question. If blue is a favorite color? And it suggests that “girls go in for it a lot now-a-days!”

The top left illustration features a young lady on the knee of a special constable in his blue uniform. Special constables were recruited during World War One and worked on a voluntary basis and were paid only expenses. I’m sure their activities were many although one article suggests that their primary function was to prevent German infiltrators from interfering with the nation’s water supply.

On the top right of the card, we can see a couple of young ladies who are ‘stepping out’ with sailors who are wearing their traditional blue uniforms. The focus point of the three illustration is the gentleman flanked by two young ladies with the suggestion perhaps being that he should be receiving the highest level of female interest.

Albeit this card is a simple illustration the artist appears to have well captured the fashion of the day. The gentleman who is the main feature isn’t however wearing anything of fashion. He is wearing the blue uniform used in military hospitals. This outfit was known as the “convalescent blues.” The uniforms were made of blue flannel lined with white, worn with a white shirt and red tie. They were easy fits, and many patients had to turn up or cuff the pant legs. Men arrived at the hospital from the front in filthy lice-infested army uniforms, and the convalescent blues were an aid to preventing infection and disease. They also identified the wounded soldier as a returning hero.

Contemporary postcards featured soldiers in hospital blues as a boost to patriotism and the war effort. So, the gentleman in the main image is deserving of greater attention as he is a wounded soldier – or a recovering hero. The uniform was also known as “hospital blues” and hence the title, Hero in Blue Jeans.

I like cards with messages that referred to the content. Here Maggie makes mention of the image although she has also specifically selected the card featuring a wounded soldier to send to Jack.

Let’s look back from 1918 to the census of 1911. In 1911 Jack was 11-year-old John Metcalfe, a Durham schoolboy. He was living with his father John William Metcalfe, a 32-year-old pubkeeper and his mother Ada Grace. There were also two younger siblings.

In the search for military records of Jack, I found myself confused, but soon realized that I was looking at information for two John Metcalfes. One being Jack Metcalfe (the wounded machine gunner) and the other being John William Metcalfe who was 39 years old and had enlisted in the Army Reserve Corps at Newcastle. The second being the father of the patient at Bath.

Jack’s father joined the Highland Light Infantry and served at home. He attended an Army cookery course in Dublin in 1917 and was later transferred to the Royal Army Medical Corps where he served in both Carlisle and Blackpool. Despite locating service numbers for him it seems there is no record of post war decorations. Jack’s father was discharged in 1919.

We left the son Jack in the Bath War Hospital that was built in Combe Park specifically for the large numbers of war wounded and by 1918 it accommodated 1,300 beds.

Regrettably this tale has no happy ending. It was reported by the Commonwealth War Grave Commission that Private John Metcalfe of the Machine Gun Corps, and 19-year-old son of Mr. and Mrs. J. W. Metcalfe of Durham, died November 4, 1918. Interment was at St. Giles Churchyard, Durham.

The tragic reality that soldiers die from battle wounds is that this young life ended just one week before the fighting finished on November 11, 1918.

As we look again at the card and think of a “Hero in Blue Jeans,” we wonder if Jack was ever well enough to wear the “convalescent blues.” It is likely that Maggie knew the extent of his wounds or illness for she writes, “I hope you are keeping a great deal better.” Also, it seems Maggie feels helpless, yet she knows the card will be delivered, but will Jack ever be in a condition to know of it. We all know that war brings much sadness to humankind. But as we are told, “remember the good times.” Here the good times are the ones enjoyed by the special constable, the sailors, and the hospital patient. This card is such a piece of history – its story needed to be told – for Jack, and his father.

Bob Teevan is an eclectic collector of vintage postcards. He enjoys digging into the people and places related to his cards and thinks of a postcard as a window into history. He has recently begun a Facebook group, “People and Places behind Vintage Picture Postcards” that has informal and fun discussions in respect of the people and places behind postcards. He is also keen to keep the fun in the collecting hobby. He lives in Scotland.
PrevPreviousThe Wellington Series – Tower of London Vignettes
NextThe Common States of Nudity – a Gallery of Beauty, Humor, Joy, and LoveNext
5 Comments
Oldest
Newest Most Voted
Inline Feedbacks
View all comments
Joe Hohmann

A few years ago, I got a “linen” postcard of a Greyhound bus. On the back was a message from a guy to his parents, dated 1942, saying he was on his way to army training. He gave them his name and future army post address. Because his first and last name was so unusual, I decided to Google it. Up came a “family tree” indicating he died in 1945. I then found Army records showing he died in Germany of wounds 2 weeks before the war in Europe ended. I keep this info with the postcard. Gone but not… Read more » 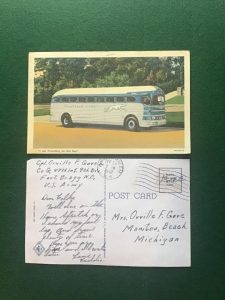 Thank you very much for this postcard with artwork by Douglas Tempest who is still another name I am not familiar with. I will look through what I have and see if I can find another example. I like this one very much and appreciate the storyline and history that was discovered. Excellent work.

The mention of special constables reminded me of my dad’s story that during World War II, he was occasionally sent up to the roof to “look out for Japanese Zeroes” by the nuns at the Catholic elementary school he attended. Since he lived in Ohio, it should be no surprise he never spotted any.

Bob, that sounds like it could have been a constructive was to deal with a kid’s need for action. What do you think ?