It is difficult to write about topics that stand-out as failures or shortcomings. Nevertheless, there is an adage about talking to people you don’t know, and this is a stretch, but writing a story of an event in your life is almost a conversation. Here’s the story.

My grandfather Atherton Burt was a musician. Professional work in his hometown of Redditch, England, simply did not exist. The closest symphony orchestra was in Birmingham, which meant that he lived in a boardinghouse for about 30 weeks each year. I don’t remember much about those years – what I do know, I learnt later. The story is, one day (it was likely in summertime of 1958) my grandfather came home unexpectedly with a flyer that announced auditions for the West Side Story orchestra that would open in the West End (London’s equivalent of Broadway) in December. The salary was to be almost double what he was paid in Birmingham, and it meant that he could afford a small London flat where he and my grandmother could live together and be happy.

Bernstein’s masterwork opened on Saturday, December 13, 1958. Theatre enthusiasts queued for blocks to buy tickets. Six weeks of Sold Out or SRO (standing room only) ticket sales were behind them before the orchestra members had an opportunity to buy seats at reduced prices for family and friends. The average ticket price at the time was about £2.50, but for WSS even the reduced ticket cost £3.90.

My family – Pa and Mama, Grandma Burt, my sister Jayne and I – had come to London on the train, at my grandfather’s invitation to see West Side Story. And, since it was my birthday, Grandma Burt told me to choose a place to visit as a birthday present. I picked the Tower of London. I wanted to see, ghoulish as it was, the “chopping-block.”

That January weekend was the luckiest three days of my life. I got to see West Side Story with my grandfather in the orchestra, I visited the Tower of London on a guided tour with my father (Mama, Grandma Burt and my sister went shopping) and I found three half-pennies on the sidewalk just in front of the Tower Gate. I later used my new-found wealth to buy a postcard. The very one you see below.

My first “collected” postcard has all the elements a 15-year-old would want to remember. There’s a canon in the foreground, you can see the tower walls, and two Warders are seen in the center of the image – they were probably discussing Tower business or the duties they had to perform before going home for the night. I once thought I would become a Warder, but the salary in the hotel business was much better.

In my opening I mention a failure or shortcoming. Well, here it is! I started collecting postcards about thirty-five years after that birthday in 1959. Up to that time, 1994, I had about six cards in my, yet to get serious collection. Hence, what is my short-coming? It’s 2022! Twenty- eight years of collecting have passed, and I still haven’t completed the first set of postcards I set-out to collect. The Wellington Series, by G. and P. Limited, London, England.

The set is comprised of twenty-cards. I think. Up to this very day, I have found 20 images at shows, fairs, in private collections and on those damnable Internet auction sites. But as the postcard gods seem to be working against me, I have only found eighteen of the twenty. The two missing issues will remain my secret for I really do want to find them on my own.

G. and P. printed the vignette set at least three times. The first time somewhat prior to 1905, that first set had the G. & P. logo in the top right corner next to the stamp box on an undivided back. The second printing, the Wellington Series was done around 1908, and the third printing is likely from the mid-1920s. The later sets had distinctive, divided backs, but only the Wellington set is so identified. 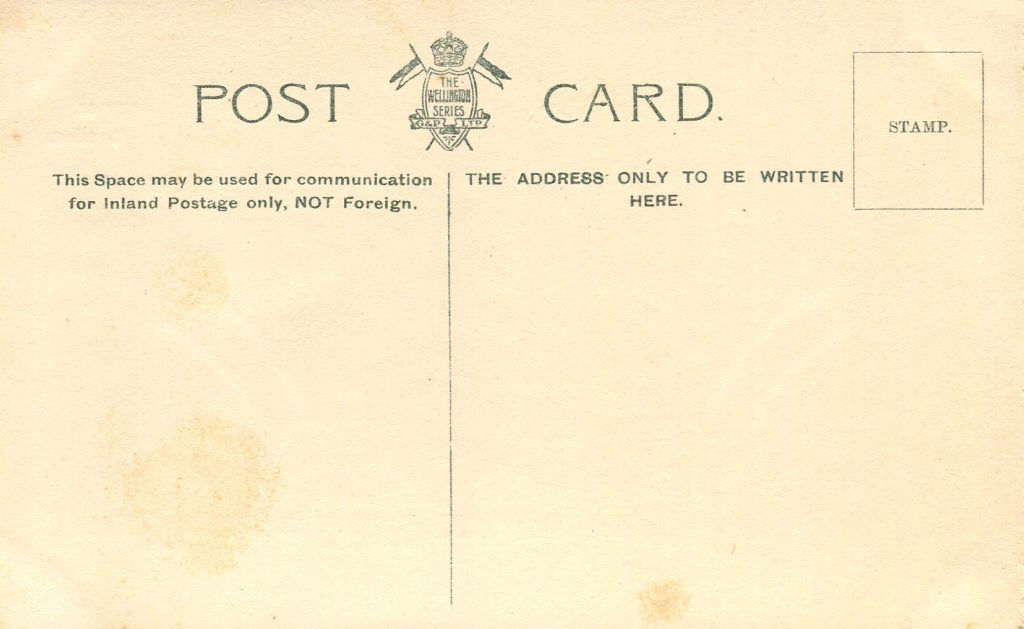 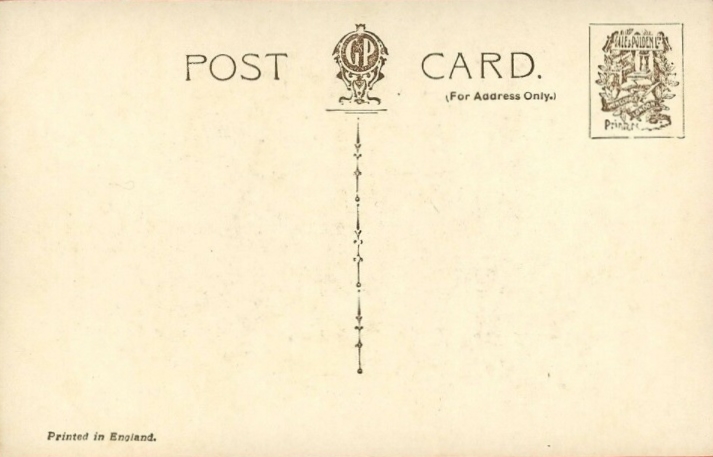 The only other difference is that the “Set Title” in the Wellington set and the 1920’s set used upper- and lower-case letters (Tower of London), whereas in the first printing the “Set Title” was in all-caps (TOWER OF LONDON).

What am I to do? Will I pass away as a failure? I have had my fingers crossed for so many years, they may stay that way forever.

My favorite cards from the sets is still my first card, and here are four others. 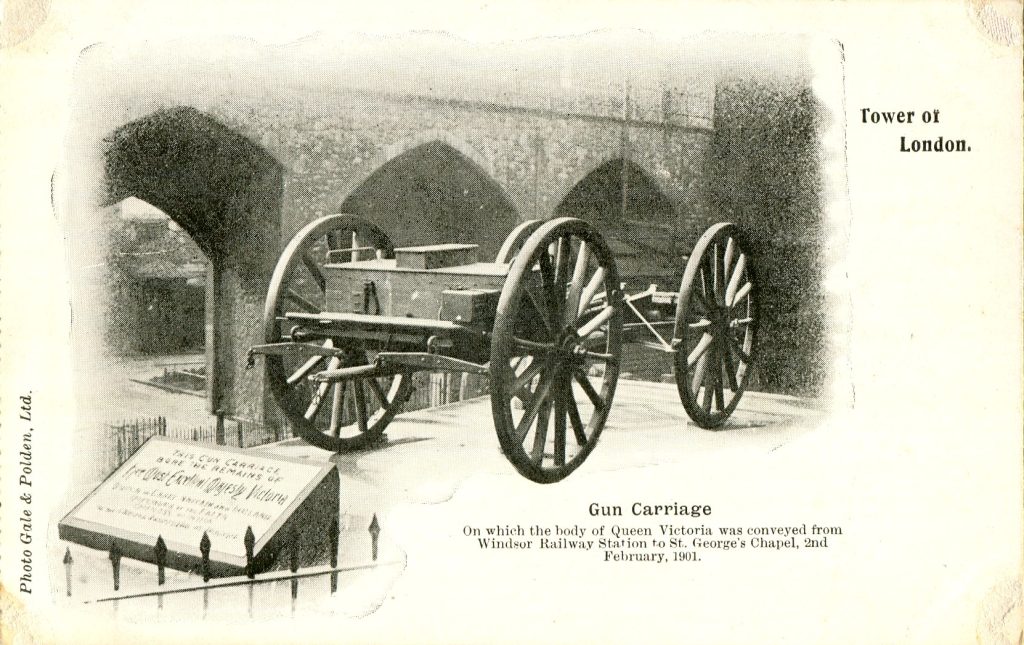 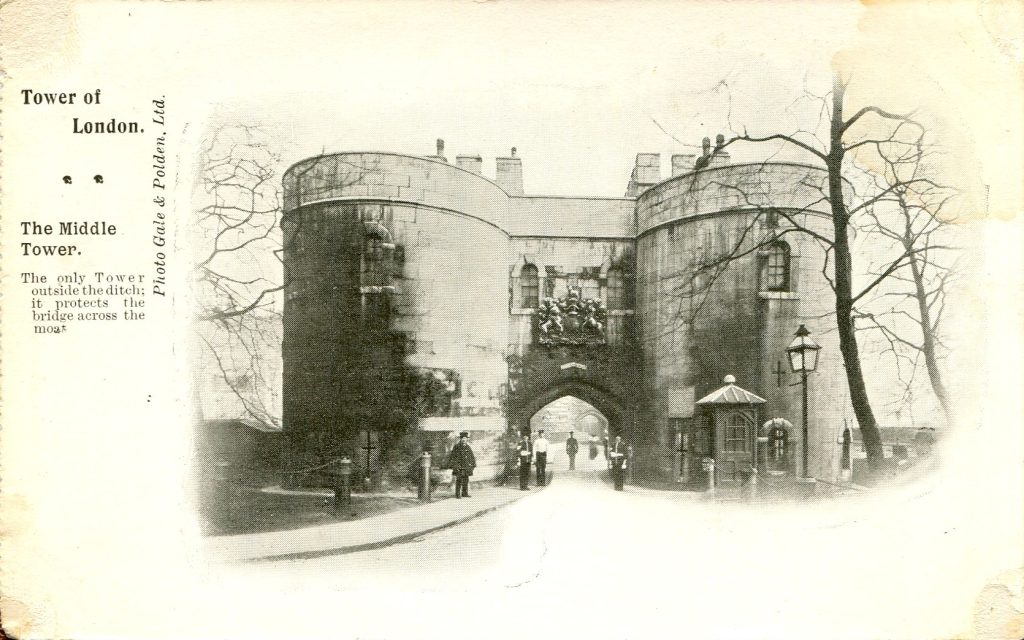 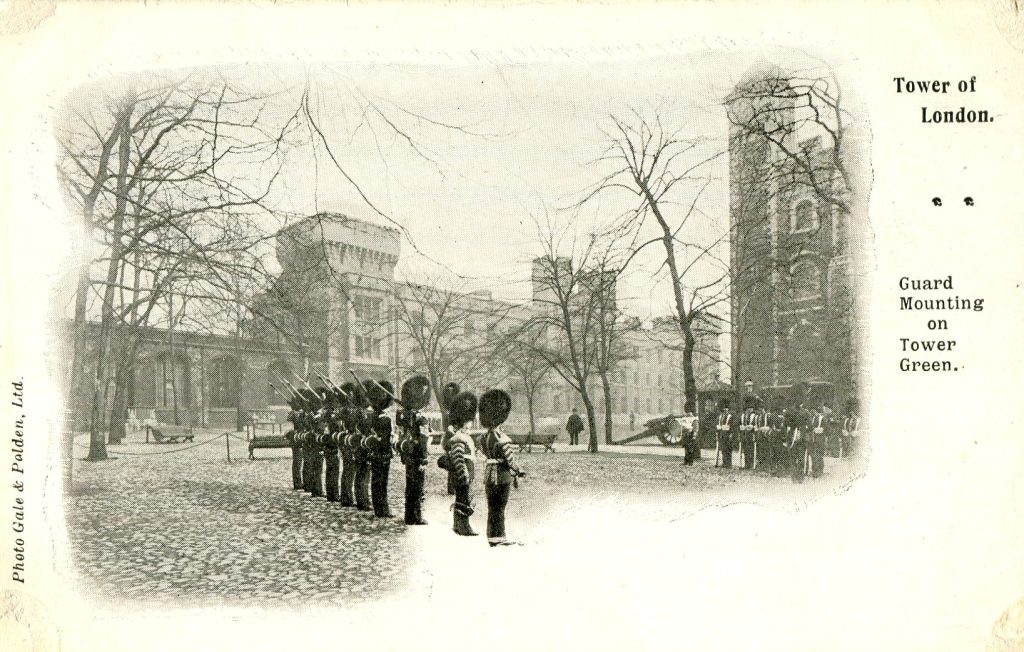 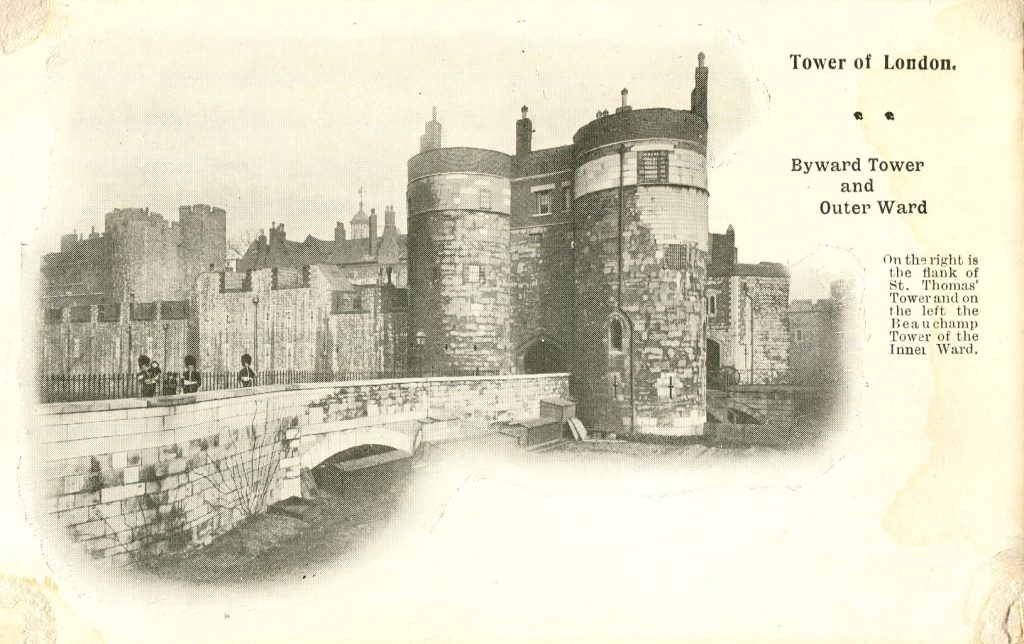 Note: Gale and Polden, Ltd., also published an “Interior” version of the Wellington series at their 2 Amen Corner facility around 1930. It contained 24 white-border postcards and sold for 6d (“d” was the UK’s version of 1¢).

PS: We all know that there are different social fauxpas in every society. One language misspeak that I find particularly amusing – probably because it was never said in my family – is the word, “bloody.” You Americans say the word without hesitation for you see bloody scenes of murder, chaos, and destruction on your tellys every day and night. But in the UK, that same word is considered “low-class” and “inappropriate.”

One card from the 1920 printed series can be seen below. It reminds me of a story straight from the “kids say the darndest things” file.

On one of my many subsequent visits to the Tower of London, I sat on a park bench just inside the Bloody Tower Gate. It was a sunny Sunday afternoon, and I was catching up on some details from my tower guidebook. From over my shoulder, I heard a commotion from a family of four (parents with two children) who seemed to be making their way to the Crown Jewels vault.

The five- or six-year-old boy was yammering on about something I couldn’t understand, but as they passed me the boy looked up to his mother and asked, “Mummie, is it okay if I say “bloody” if I’m talking about the Bloody Tower?”

George “Burt” Martin loves to travel to the member countries in the Commonwealth of Nations. He has visited eleven of them. Burt relocated to California after retirement, but he hails from a small market town in the Cotswolds of England where he lived in a house that was built in 1639.
PrevPreviousWinter Memories – Coal, Heat, and Postcards
NextHero in Blue JeansNext
3 Comments
Oldest
Newest Most Voted
Inline Feedbacks
View all comments
Bob Kozak

Hope you find the two cards you need to complete the set, Burt!

I have a vignette card of the Tower of London from Gale & Polden Ltd with the 1920’s? address side showing “View along the Outer Ward

Loved this article by Mr Martin with his personal story & the beautiful cards. My Dad was born in London but I never have been able to get there.
“Bloody” I understand was referring to Christ’s blood, and therefore not acceptable
to use as an exclamation aside from being low class.