We live in a three-year old house with a heat pump. If that seems like a strange thing to say it’s because in January, even here in the moderate mid-Atlantic states where it only snows occasionally, it’s cold. The heat pump is a marvelous thing that air conditions the house in summer and heats it in winter. I do nothing except change the filter every so often. There’s no dirt, no oil tank, no delivery truck with its sprawling black rubber hose, no pilot light to go out, no gurgling hot water pipes, no clanking radiators, and no coal bin in the basement. I just turn on the thermostat and the pump quietly, efficiently, and almost inexpensively does the job.

I marvel at such devices—not because I’m that old but because for some reason winter always reminds me of coal-fired furnaces. They’re childhood memories for me and perhaps for that reason not very accurate, but I remember the big furnace with its glowing fire, the heavy coal shovel, the galvanized ash tubs collected by the ash man, and the coal bin with its dark, dusty mountain of fuel. I remember my father shoveling coal, shaking the grate to filter out the ash, and banking the fire for the night. I remember standing on the floor heaters and feeling the hot air rise up my trouser legs before venturing out on cold winter mornings. I remember the slightly sickening odor of coal gas and the coal man coming to unload his coal down the chute into the basement bin.

Later in my childhood we moved to a house heated with natural gas. The new furnace seemed tiny and inadequate by comparison. The basement was clean and the mystery and power of that live, ever-consuming fire was gone. I’m sure though that my disappointment would have seemed silly to my parents who were understandably grateful to be free from the dirt and trouble connected with the coal furnace.

The Coal Industry
Coal is a sedimentary rock formed millions of years ago by layers of decomposed organic material that accumulated in swamps near sea level. Most coal deposits are 50 to 300 million years old. Under pressure from other layers of sedimentary rock deposited on top of this organic material, the decomposing plants turned first into peat and then to coal. As a result of the pressure, coal can be divided into four classes: lignite, sub-bituminous coal, bituminous coal, and anthracite.

Within the various classes of coal there are three grades—high, medium, and low—distinctions based upon the percentage of unwanted ash-producing material and sulfur the coal contains. The highest grade of coal will contain only two to five percent ash-producing material and one percent sulfur. As a result, high grade coal burns cleaner and produces less waste and less air pollution. Correspondingly, high grade coal is expensive and more difficult to obtain.

The coal that most of us are familiar with from home heating is anthracite— the hardest and purest form of coal. High in carbon and low in water, anthracite is jet black, requires a high heat to ignite, and burns with a clean, steady, blue, sootless flame. Although it was not equally available in all parts of the country and was always more expensive, anthracite was the favorite heating fuel in the days of the coal-fired furnace.

Coal was discovered in the U.S. as early as 1673 but production didn’t start until the 1720s. Coal was not widely used, however until after the 1830s when America’s railroads began their incredible expansion. Not only were the locomotives coal-fired, but the railroads provided a way of transporting huge amounts of coal for unimaginable distances at relatively affordable rates. The use of coal was also stimulated by the development of electricity. In the 1880s coal-fired steam turbines produced electricity for an ever-increasing number of Americans. By 1918 coal consumption in the U.S. had peaked and coal provided nearly all of our energy and heat.

Predictably, the coal industry in this country has had periods of expansion and contraction. The highest average price for coal in the early decades of the 20th century was reached in 1920—$3.75 per short (2000 pounds) ton. This was its value at the mine—not the price that the retail customer would pay. In contrast, in 1931 during the Depression, the average value per ton dropped to $1.31.

As the years pass, the use of coal has dramatically declined. After World War II the railroads completed the switch from coal-fired steam engines to diesel locomotives. Similarly, with the increase in the use of natural gas and oil, and the pipelines necessary to transport these products great distances, the number of homes burning coal for fuel has nearly disappeared.

Postcards and Coal
Given the importance of coal in this century, it is not surprising that coal mining is extensively represented on postcards. Most of the cards connected with coal show mining or processing operations and things like “breaker boys at work” or “hauling coal from the mines.” Much less common are cards which depict the dangers that constantly surrounded the miner—the disasters, the cave-ins, the fires. 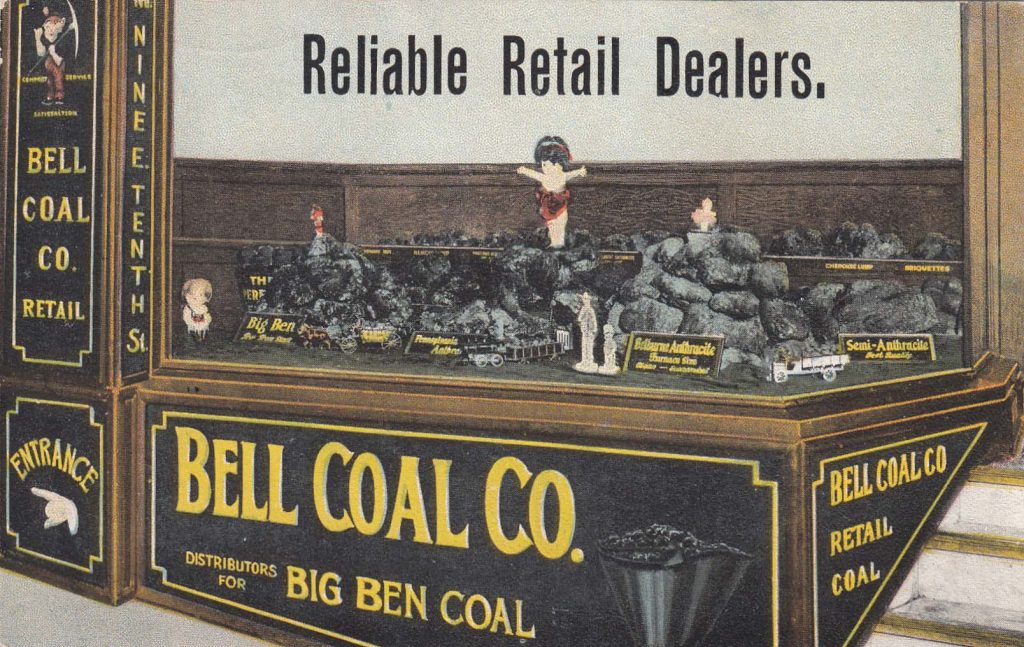 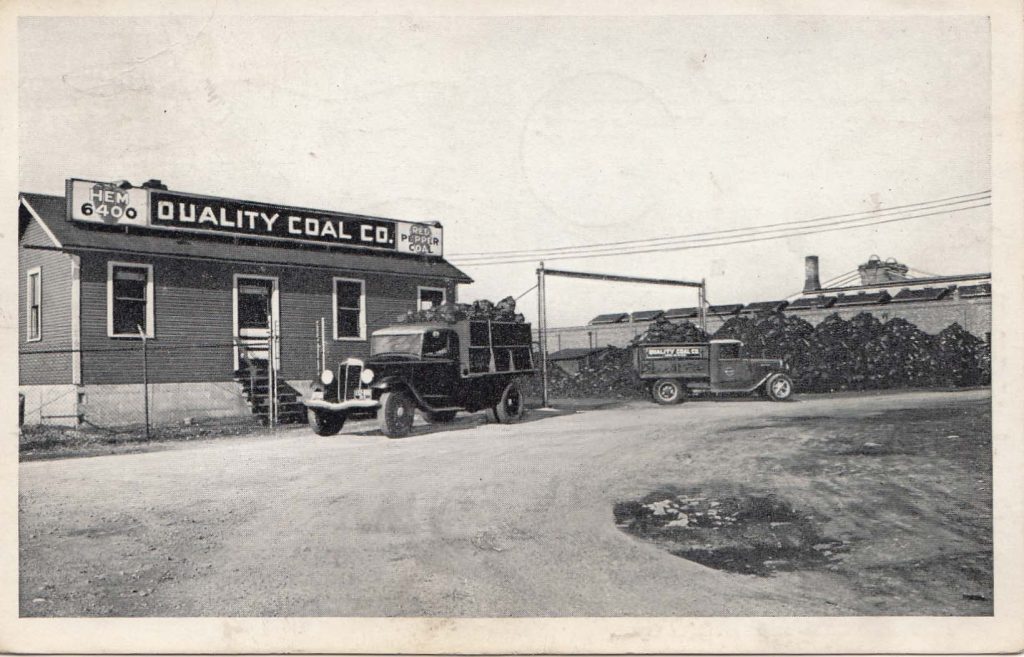 Postcards connected with the retail sale of coal and its home use are equally scarce—especially cards other than views of the local retail coal yard. Because of the importance of coal in home heating, coal advertisements on postcards range from the early undivided back era, circa 1907, to linens from the 1940s.

Because of the availability of heat pumps and other modern forms of home heating systems, most homes in the U.S. no longer heat with coal. Current data suggests that less than 1% use coal. That is quite a change from the 1950s when 35% of the homes in the U.S. were heated by coal.

It’s ironic that given the high cost of energy these days we’ve begun to come full circle. Home heating began on a room-by-room basis. Fireplaces or wood stoves scattered throughout the house kept individual rooms warm. The concept of central heating came later, when energy was both abundant and relatively inexpensive. Today, we’re back to heating room-by-room with kerosene heaters, wood-burning stoves, or similar devices.

But, what about coal?
Surprisingly, coal is still around. But first a historic look at prices.

In the 1980s, one coal supplier, listed in the yellow pages of a New Jersey Bell telephone book, promised a one-ton delivery of the best coal available for $119 a ton.

Now, as coal turns into a Postcard History topic, I got curious about the relative price of coal today. Since most reference books dealing with coal cite mine prices, I turned to our local (the closest source is 28 miles away) retail dealer and asked for a sales representative. He told me the price of a basic coal burning stove today is about $1500 plus the cost of delivery and installation, and that both bulk and bagged coal are available but need to be special ordered at a delivered price of $409 per ton.

Professor George Miller, University of Delaware, an accomplished collector and a frequent contributor to a national postcard magazine, has granted Postcard History permission to republish his writings from the 1980s and ‘90s. We are proud to offer his work to our audience. His postcard history lessons are timeless!
PrevPreviousGeneral Motors Company (GM) the pre-World War II years
NextThe Wellington Series – Tower of London VignettesNext
7 Comments
Oldest
Newest Most Voted
Inline Feedbacks
View all comments
Joe Hohmann

I remember our coal fired furnace prior to 1952. There was one big “register” over it to the first floor, and a smaller one to my upstairs bedroom. We now live in a 1889 house, and the old coal bin was at a driveway window. Thanks for a great article!

My boyhood home was built in 1937 and had a coal-fired hot water furnace. Sitting on the radiators was always a way to keep extra warm. I don’t remember when we switched, but a friend owned or worked for a home heating oil company and converted our coal-fired to an oil-fired furnace in the 1950s. The friend said we would never have a problem with the furnace wearing out because coal burned so much hotter than oil. Eventually, by the 1980s, the oil company complained that it was difficult to get parts for the old boiler and fan. When the… Read more »

Being a California boy, natural gas was the fuel of choice for most of us years ago as it is now. Not much has changed except the price! I enjoyed learning more about coal and its use in other parts of the country.
Brings back the scene in “Christmas Story” when Ralphie’s dad struggled with his cantankerous furnace. Thank you!

My cousin Jerry Ottaway still owns one of the Ottaway Amusement Co coal-fired steam trains and three passenger coaches that once steamed around our family’s Joyland Parks. It is my understanding that no coal is being sold in Wichita, and he must drive to Colorado and bring a trailer load of coal back home and store this for special “train day” when he steams up and takes friends and family on a special ride. The smell of that coal smoke surely does bring back memories. Thanks for this great article about coal.

I was born in 1959 and thus didn’t grow up with a coal furnace, but my mother told me stories of the coal chute at her parents’ house. When I was about twelve years old, I did see a truck delivering coal for apparent home use, so there were still a few holdouts even then in the Cleveland area.

Thank you for the interesting article. We live in a house built in l917 originally heated by coal “octopus” furnace. It is a large house which had a wood or coal burning kitchen range, wood burning fireplace, and two other chimney outlets for stoves. Sometime in-between l9l7 & the l950ies, I was told there was a chimney fire (in the attic there is a charred ceiling rafter) and afterwards the coal furnace was replaced by an oil burning furnace, which continues to heat the house today.

Great article. Brought back memories of early 60’s when coal was still popular heating source in our family homes and community. The coal bins, the ashes, getting the coal lit, and the warm heat, I remember it all. Coal delivery companies were very busy during the summer months filling the coal bins. Being from central PA various types of coal and sizes were available nearby. How easy we have it today to heat our homes compared to 60 years ago.