For some non-logical reason these three things—peanuts, popcorn, and Cracker Jack—are linked together as a phrase in my mind. It’s a fuzzy childhood memory, formed either at baseball games or circuses where vendors worked the crowds hawking the three to hungry kids like me.

And, of course, I remember the cellophane bags of nuts, paper bags of hot roasted peanuts, hot buttered popcorn at the Saturday afternoon movies, and those silver-foil, waxed boxes of Cracker Jack with the toy surprise inside. Whatever the reason, I’ve always collected the three topics together and grouped them under the heading “Peanuts, Popcorn, Cracker Jack.” So, even though the grouping makes logical sense (Cracker Jack is made from peanuts and popcorn), the real link here is one forged by memory.

Peanuts
The peanut is a fairly common postcard subject. Some of the nicest peanut postcards are the advertising issues done by Planters Peanuts featuring their trademark “Mr. Peanut.” This monocled, top-hatted, cane-carrying, spat-wearing, peanut-bodied figure was created in 1916, the result of a school-boy’s sketch submitted in response to a company contest. The term “Planters,” incidentally, was chosen in 1906 by founder Amedeo Obici, an Italian-born former fruit stand operator from Wilkes-Barre, Pennsylvania. The name meant nothing; Obici said that it just sounded “important and dignified.” Planters pioneered the packaging of peanuts in cellophane packs and in vacuum-packed cans and was the force in promoting the popularity of peanuts as a snack food in the twentieth century. 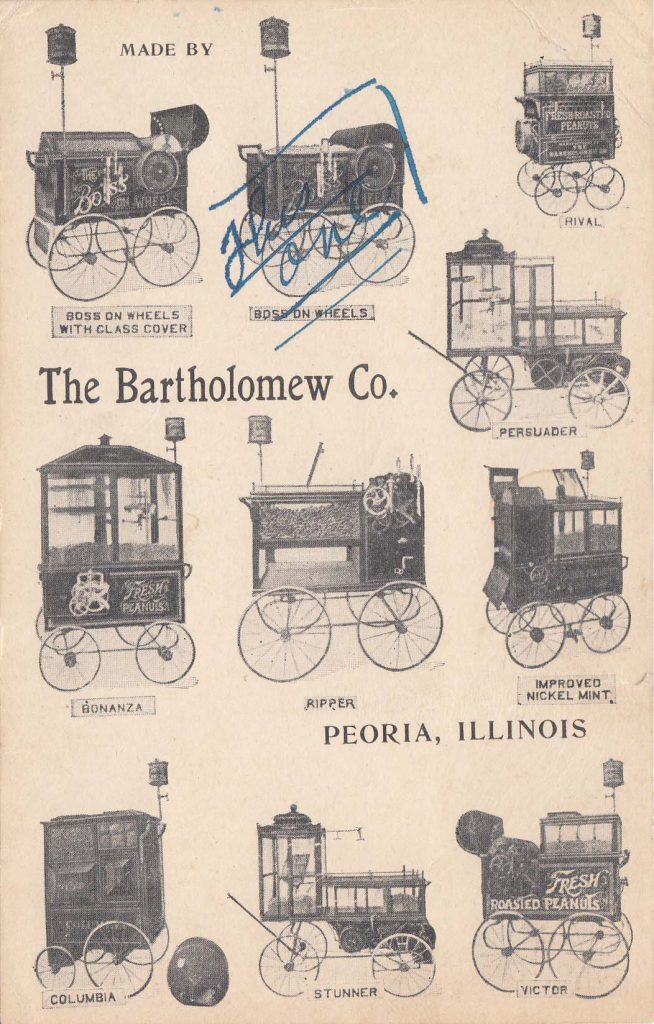 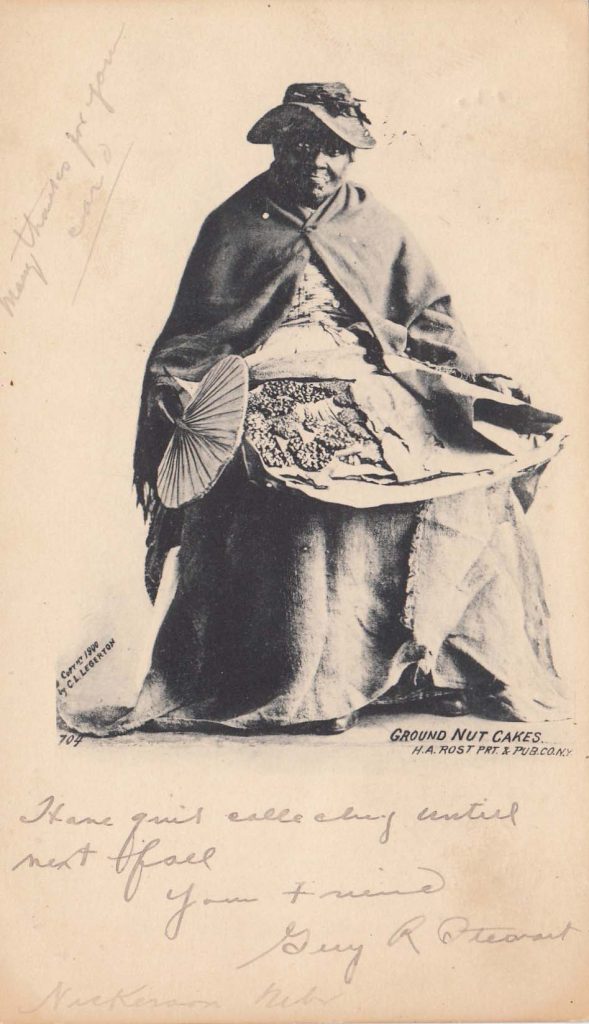 In the early 1900s street vendors were familiar sights, and every self-respecting vendor needed a wagon. The truly rare postcard advertisement for peanut wagons manufactured by the Bartholomew Company of Peoria, Illinois, depicts the ten styles available: the Bosson wheels with glass cover; the Boss on wheels; the Rival; the Persuader; the Bonanza; the Ripper; the Improved Nickel Mint; the Columbia; the Stunner; and the Victor.

Other peanut products can be found on postcards as well. The “Ground Nut Cake” vendor is a favorite. It is a private mailing card by pioneer publisher H. A. Rost Printing and Publishing Company of New York City.

The card below is of the “Peanutine Wagon” at Old Orchard, Maine. Among the many treats for sale at Peanutine College Ices was a peanut molasses candy that was “guaranteed to be the best of all kisses.”

Popcorn
Popcorn, on the other hand, is not a common postcard subject. The Holiday Special below is the only pop corn advertising card so far. This undivided back card shows a colorful box of Snow Ball Shelled Rice Pop Corn. For $2.30, retailers could purchase 40 16-ounce packages for a little less than 6¢ a package.

The Hot Fresh Pop Corn machine is an undated chrome advertisement for the Auto-Pop Popcorn Machine, set to dispense 24 ounces of popped corn for 15¢. (Have you bought popcorn at a movie lately?)

An early comic, features the Popcorn Man. “The Popcorn man is jolly / And grins at me so funny / And if the penny I forget / He says ‘I need the money.’”

Popcorn can be a real photo topic, too. Dating from the late 1940s the real-photo above shows Jimmy’s “Popt­corn and Peanuts” Wagon in Brainerd, Minnesota. 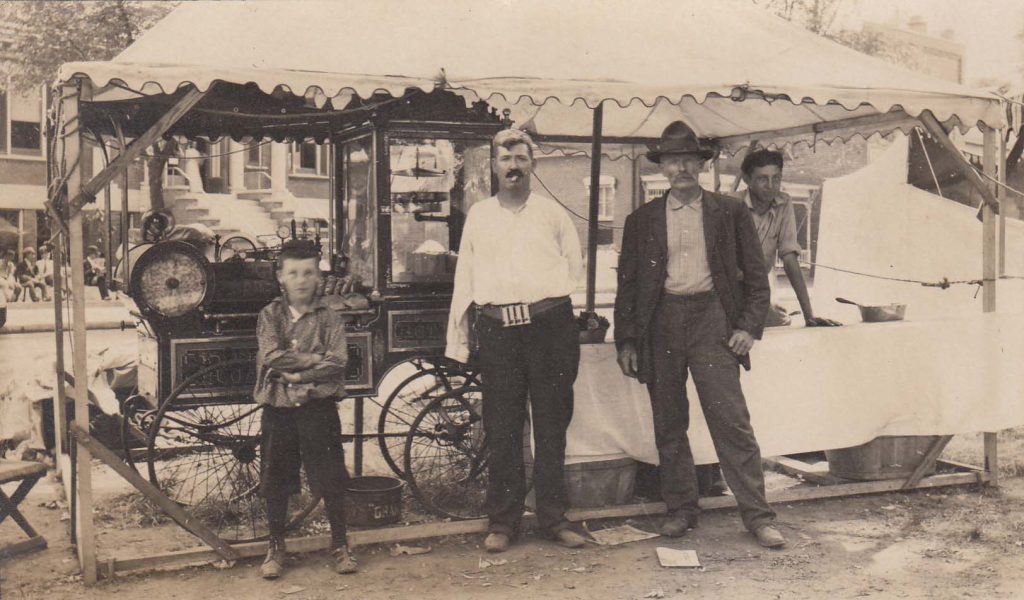 Cracker Jack
It takes peanuts and popcorn to make Cracker Jack, and it started in the 1890s when F. W. Rueckheim of Chicago, owner of a popcorn factory, was experimenting with a new product. He mixed peanuts and popcorn and then dipped the mixture into a molasses syrup. He called one of his popcorn tasters to sample the result. “That’s a crackerjack!” the man exclaimed and so the name and the product was born.

The taster’s reply was a bit more understandable at the turn of the century for the term “crackerjack” was a common expression derived from “cracker” (a thing outstanding) and “jack” (a nickname). Written in a slightly different way, the expres­sion would have read “That’s a cracker, jack.”

In 1904 Cracker Jack introduced the first wax-sealed, mois­ture-proof package. It was also the first product to include toy surprises and those premiums are collector’s items today.

The symbol connected with the product is not, of course, the bears featured on the postcards, but instead a saluting sailor with his dog, Bingo. The company explains, “Prior to the first World War, Americans proudly displayed their patri­otism and Cracker Jack was no exception.”

Cracker Jack Bears Postcards
In 1907 Rueckheim Bros. & Eckstein gave away a set of postcards. Apparently, a card was included in each package of the product. A complete set was also available free to anyone mailing in ten sides from Cracker Jack packages or 10¢ (in coin or stamps) and one side from a package.

Copyrighted by B. F. Moreland, these narrow, colorful cards feature the exploits of the Cracker Jack Bears—a story surely inspired by the RooseveltBears. The bears escape from the Lincoln Zoo in Chicago and set out in an airship made in part from a package of Cracker Jack. Their mission is to spread the word about this product throughout the “world” (although they never leave the United States until the final card when they set sail for Mars!). Four of the sixteen cards follow with a complete checklist of the cards and their messages. 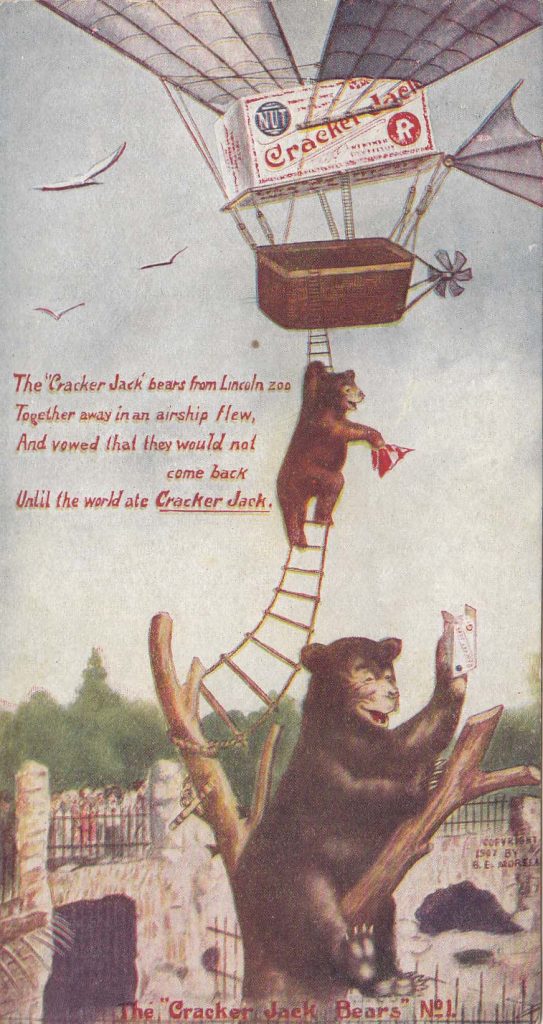 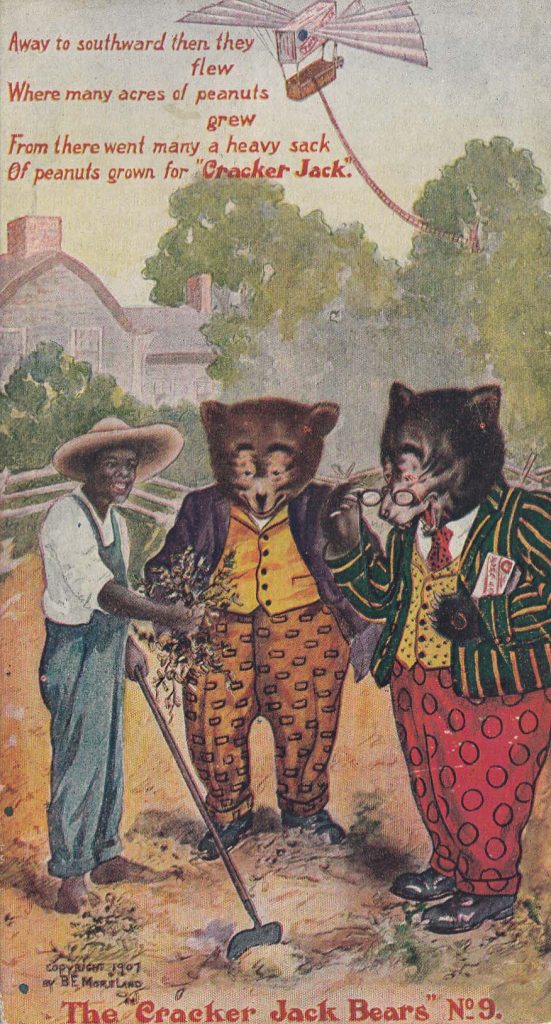 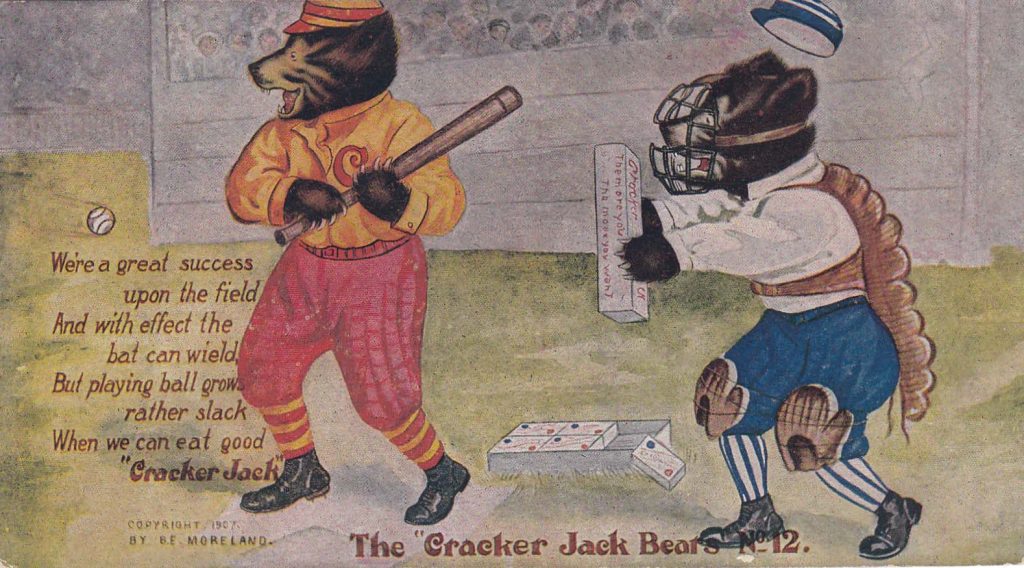 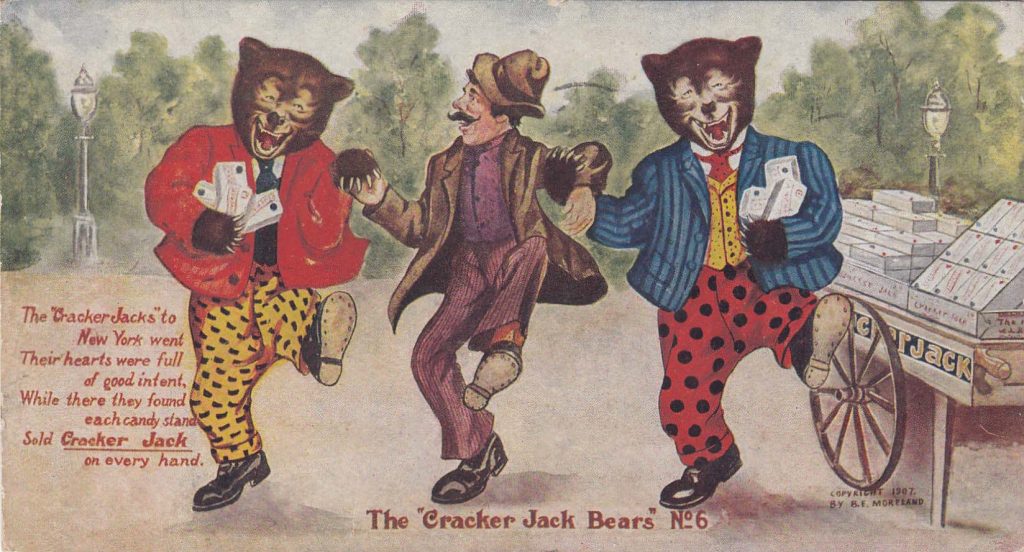 Professor George Miller, University of Delaware, an accomplished collector and a frequent contributor to a national postcard magazine, has granted Postcard History permission to republish his writings from the 1980s and ‘90s. We are proud to offer his work to our audience. His postcard history lessons are timeless!
PrevPreviousTin Can Tourists Camps
NextRomance in ParaguayNext
4 Comments
Oldest
Newest Most Voted
Inline Feedbacks
View all comments
Bob Kozak

One reason I enjoyed this article was that I sold peanuts, popcorn, and Cracker Jack during my years as a vendor at the old Cleveland Stadium.

That Bartholomew Peanut Wagon salesman’s card is incredible. What a gem, and then to learn about the Cracker Jack Bears too. As my friend Mark Evans from Avon, NY used to say, “What a hobby.”

My husband bought a box of Cracker Jacks and the prize was just a little piece of paper. In my day, the prizes were really cool. It’s why we bought the box!

Very cool article. I enjoyed reading it. I love those Crackerjack bears, it was nice to learn the early story!