There will be very little fact (history) in this story about six postcards that show two adorable children interacting in a completely natural way – on a rooftop. The ladies will probably agree that a rooftop is a strange place to be courted; and the men will likely agree that it would be an inconvenience, but using the logic of the millennials, it must be true, it’s on the Internet.

Since facts will be scarce, guesses and speculations, will be abundant. The first of these is the assumption that there is an unusual circumstance that exists in the mind of many American postcard collectors. There is no need for a discourse filled with psychological mumbo-jumbo, so upfront, cleanly stated, the misconception is that many American collectors have no interest in foreign postcards.

The first supposition to be employed is that the “Ciudad,” (City in English), in the address on these postcards is Asuncion, Paraguay. Only one card, No. 5 is cited and dated. [Are you asking how I know the number of the card? Look at the face of the moon.] The numbers on the face of the moon have also helped in the sequencing of the message parts.

These six cards were mailed to Señorita Maria A. Pascual at Pte Carnot 424, Ciudad, by a suitor, suspected to be Mario Soto.

Curiously, different stamps were used to mail the cards, suggesting that they were not sent together. That begs the next question, how long did Mario make Señorita Pascual wait for the “next” installment?

There is no evidence on the cards concerning publication. Each card is printed with an identical Universal Postal Union postcard apparatus and the undivided backs are lined for addressing in the usual fashion.

The image backgrounds are identical in every respect. The children first appear from the far-side of the roof. He is dressed in a satin vest and wears a top hat; she is in dusting attire and is wearing a mobcap. They meet at a brick chimney. Their greeting is not unusual, it was likely a planned event. She tells him a secret. They pretend to “smoke” as they enjoy a glass of wine. She reads from a newspaper (perhaps her horoscope), then finds herself alone sitting atop the chimney with a decision to make.

See, just as was said, lots and lots of supposition . . . . what did you expect, every word on these cards is in a foreign language. 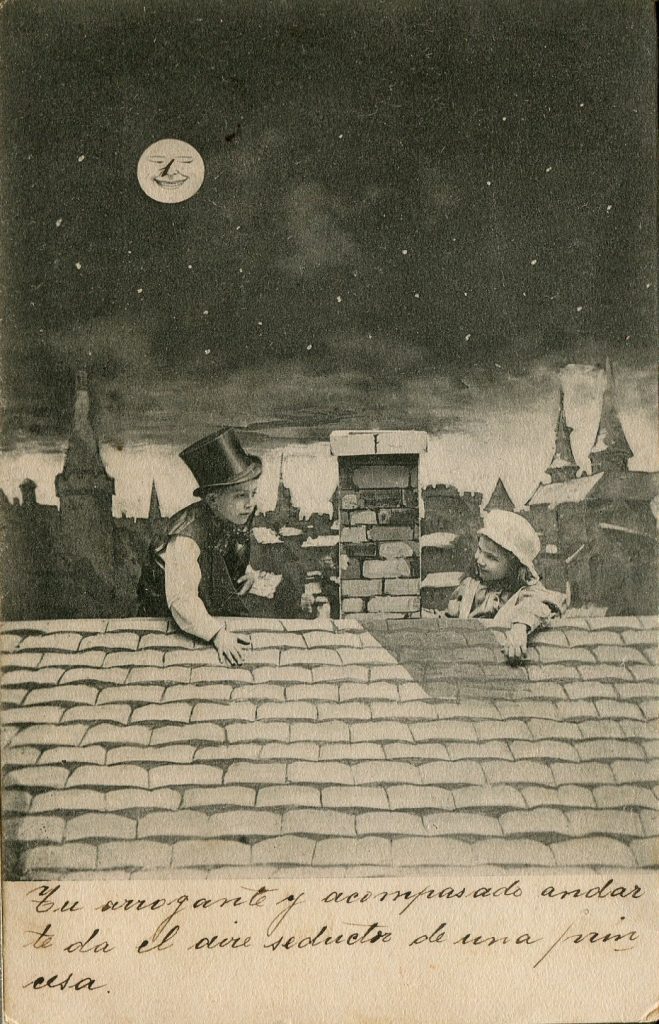 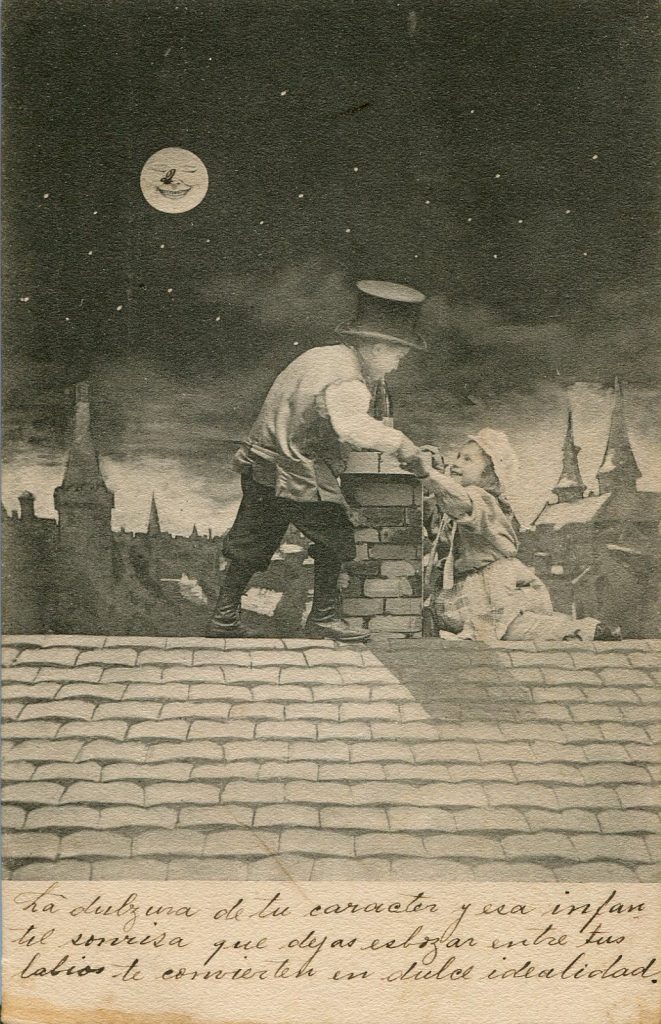 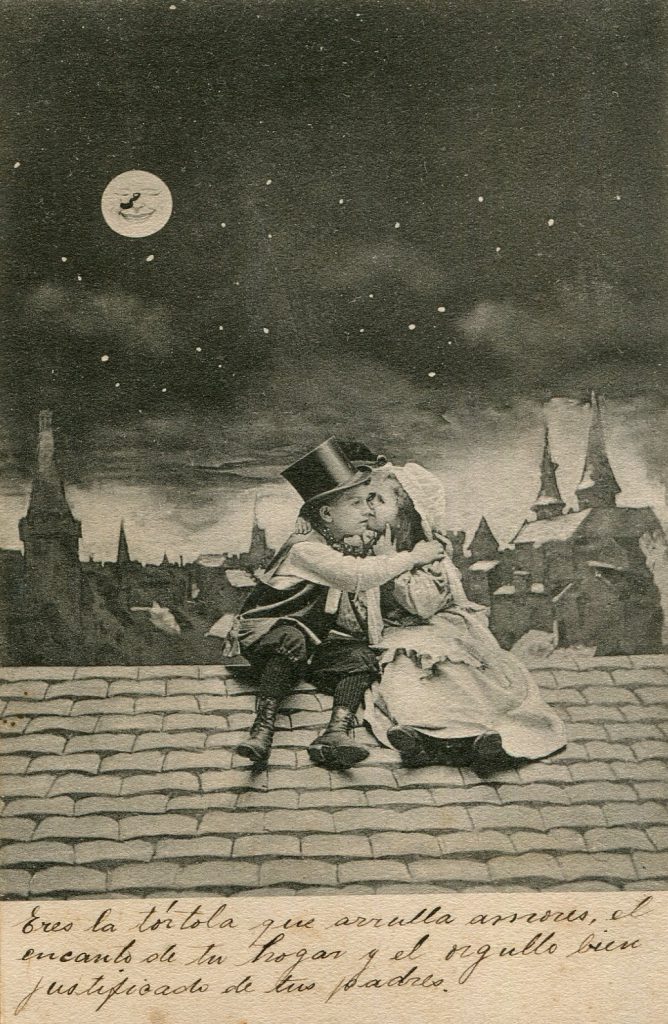 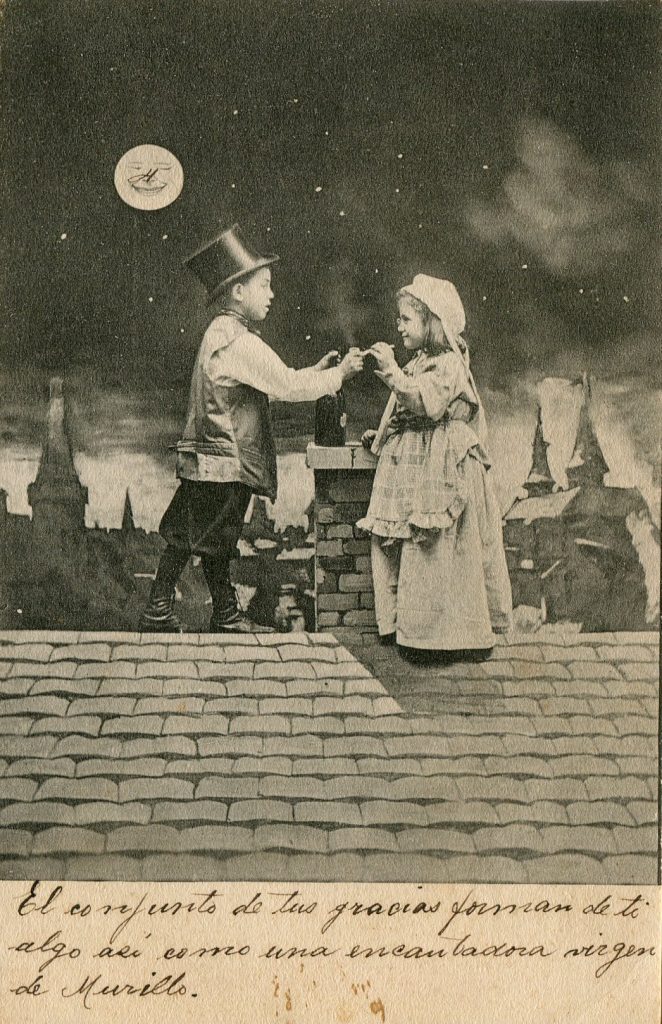 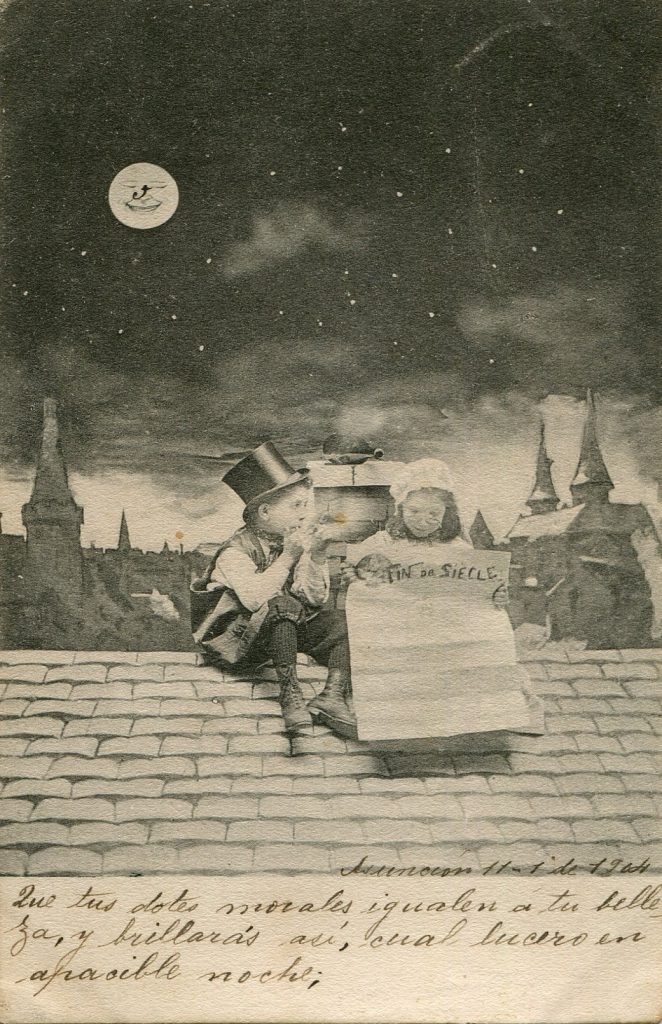 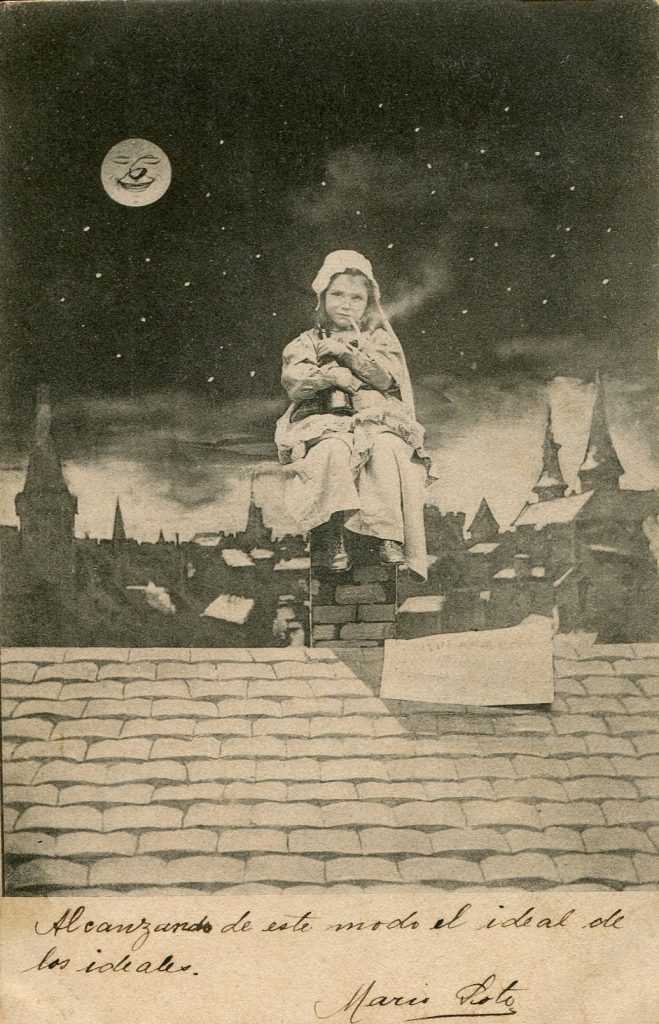 Mario’s penmanship was quite good, making it easy to type his words into an online language translation software. Nevertheless, changes in language, often by the month, week, or day as well as the evolution of etymologies and definitions vary – all of which works toward creating awkward and often clumsy translations. Remember, these words were written 118 years ago in a South American, Spanish speaking nation. There are but two sure things: the place was Asuncion. Paraguay. The time was 1904.

These translations do not reflect the idiosyncrasies of that time and place.

1. Your arrogant and paced walk gives you a seductive direction as it first ceases,

2. The sweetness of your character and that childlike smile that you let sketch between your lips eat you up in sweet idealism.

3. You are the turtledove that lulls love, the charm of your home and the well-justified pride of your parents,

4. The set of your graces make of you, something like an enchanting virgin of Murillo.

5. Your moral gifts and qualities, will shine like your beauty on a starry and peaceful night.

If you had as much fun reading this, as I did writing it, what would you guess?
Did Maria accept Mario’s proposal?

The Staff of Postcard History offers this article for your enjoyment. It is a combined effort of many: our publisher, editor, webmaster and collectors/contributors far and wide. Please use the COMMENTS feature below to let us know how we're doing.
PrevPreviousPeanuts, Popcorn, and Cracker Jack
NextReproduction Postcards – Be careful! They’re Out There!Next
2 Comments
Oldest
Newest Most Voted
Inline Feedbacks
View all comments
Bob Kozak

I don’t think Mario’s proposal was accepted. I wonder if there was some symbolism to the fact he used stamps of such varying denominations — perhaps there’s an analogy to the practice of placing a stamp upside-down to indicate “I love you” or askew to convey “I miss you.”

I do think old Mario won out.