In May of each year, three-year-old thoroughbred racehorse owners, trainers, jockeys, and fans set their travel sights on Louisville, Kentucky. They are on their way to the Kentucky Derby, the first of three races which are rated as the most significate challenges in the sport.

The second race, the Preakness, takes place at Pimlico Racetrack in Baltimore two weeks later. Three weeks after the Preakness comes the Belmont Stakes in Elmont, New York, at the Belmont Park.

The term Triple Crown was used in some circles as early as 1923 but came into common use only in 1950. It was then that the Thoroughbred Racing Association commissioned a trophy that was by design and in essence a three-sided vase. The intent was to award the trophy to any 3-year-old thoroughbred racehorse that could win the Kentucky Derby, the Preakness Stakes and the Belmont Stakes in the same year. Each race being represented by one face of the trophy that has become a most sought after and rarest honor.

The Kentucky Derby which ran for the first time in 1875, is likely the most famous horserace in the world. The Derby has a greater following then the annual Epsom Derby that occurs on the first Saturday in June at Epsom Downs Racecourse in Surrey, England, since 1779 – a race that is popular with every turf enthusiast in the worldwide British Commonwealth.

Churchill Downs opened its gates at a gala occasion in 1875. The Downs was billed at its opening as the home of the Kentucky Derby. It all began in 1872 when Colonel Meriwether Lewis Clark went to England on business. He was invited to the Epsom Derby as a guest of the Earl of Derby. His experience at Epsom triggered a dream of having a grand horse racing spectacle at home. Clark chose Kentucky to showcase the already established breeding industry in the Louisville area. His efforts resulted in the establishment of Churchill Downs.

Two African Americans, jockey Oliver Lewis and trainer Ansel Williamson teamed up to win the first Kentucky Derby on May 17, 1875. The horse was a colt named Aristides that ran the mile and a half in two minutes 37 and three/quarters seconds. 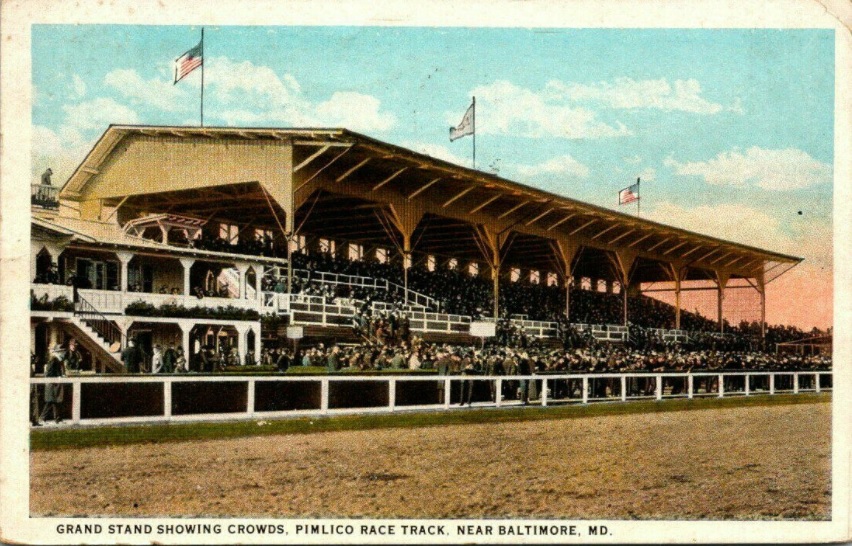 The oldest racetrack in America was built in Saratoga, New York. Pimlico in Baltimore, Maryland, opened its doors just three years later making it the second oldest racecourse in America. John Ellicott was the force of nature behind its establishment.

One quote from the Baltimore Sun says most of what you need to know, It’s hard to say whether Pimlico ever had a greatest day or top span of years when we consider this account, of the first Preakness after World War II, “All records for Pimlico racetrack were broken yesterday afternoon when 42,370 turf enthusiasts from all sections of the country, including notables of the armed forces, stage and screen, diplomacy, national and state politics, and society, saw the fleet-footed Assault gallop home to win the historic Preakness.”

[Assault was a champion American thoroughbred that was the seventh winner of the American Triple Crown.]

Pimlico was built on seventy acres purchased for $23,500 by the Maryland Jockey Club in Jones Falls, Maryland. The name came from the English settlers of colonial times, although the original spelling and how it appeared on the original settlement charter granted in 1669 was “Pemblicoe.”

Historic Pimlico Racecourse opened its doors on October 25, 1870, but it would be two and a half years before the first Preakness Stakes. The Preakness got its name after the horse that won the first Dinner Party race at Pimlico and has always been called the Run for the Black-eyes Susans – Maryland’s state flower.

Engineered by General John Ellicott, Pimlico has played host to racing icons for a century and a half in a setting where Baltimoreans have seen the likes of legendary horses such as Man o’ War, Sir Barton, Seabiscuit, War Admiral, Citation, Secretariat and Cigar thunder down the stretch in dozens of races that have seen everything from many length run-aways to by-a-nose photo finishes.

On a typical race day in the 1890s, Baltimoreans, in all sorts of horse-drawn carriages, paraded out through Druid Hill Park, then by Green Spring Road to the course. Racing was so popular that in the early 1900s the Western Maryland Railroad built a spur from Arlington direct to the grandstand for the convenience of the fans.

On May 27, 1873 seven starters made their way to the starter’s gate. A horse named Survivor, owned by John Chamberlain, collected a winner’s purse of $2,050 and did so by a margin of ten lengths. Survivors’s winning margin of victory lasted for 131 years when in 2004 Smarty Jones won the Preakness.

Belmont Park opened to the public on May 4, 1905. August Belmont, Jr. and several other investors hired Arthur Underhill as the architect and building engineer to oversee construction.

Racing was popular and the crowds filled the grandstands, but there was one unusual element of the racing at Belmont. Up to the 1920s Belmont Park featured racing clockwise, in British style. Clockwise racing allowed the members and their guests to see the race finish in front of the clubhouse.

Belmont is open for racing from late April to mid-July and again from mid-September to late October. The most famous event at Belmont is the third leg of the Triple Crown of racing – often called the Test of the Champion.

In terms of world markets and fluctuating currency exchanges it is difficult to say which is the richest horse race, but it has been said many times and in many places that Belmont Park is where you will meet the most billionaires. In recent years horse racing has become very popular in Arab countries where today, purses run as high as 12 million dollars for the winner. Nevertheless, here in America the Belmont will likely top the list of purses awarded in thoroughbred competitions. Unfortunately, this leaves the Kentucky Derby and the Preakness Stakes in the “also-ran” category. 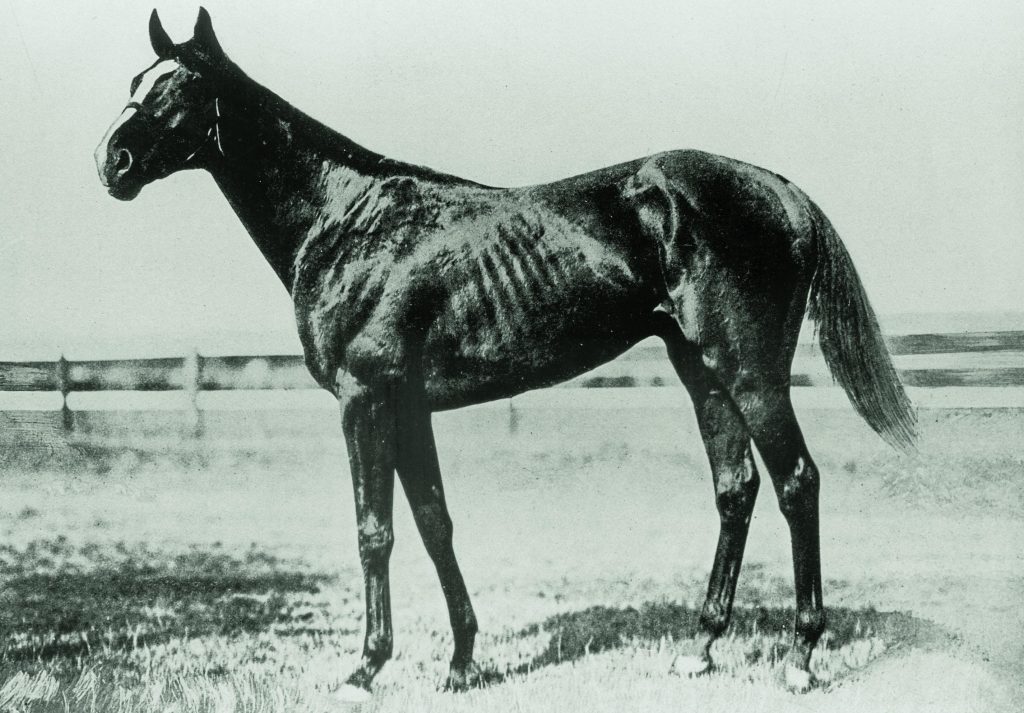 In the 112 years that the Triple Crown has been organized only thirteen horses have won the honor; Sir Barton was the first in 1919. It took eleven years for the second: Gallant Fox in 1930. 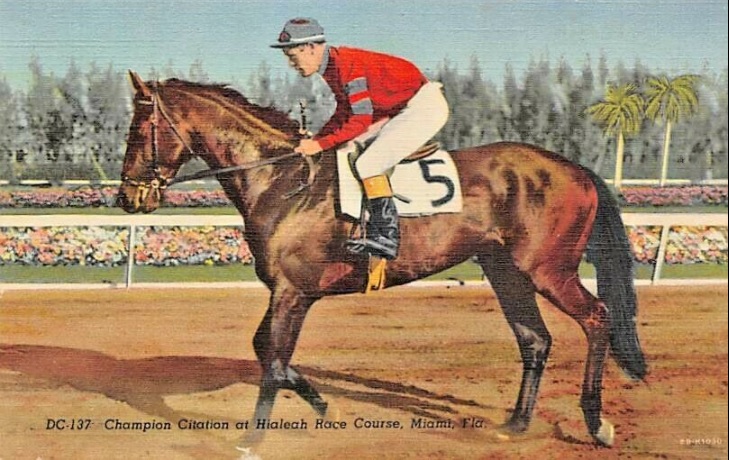 After Citation it took twenty-five years before Secretariat won in 1973. Seattle Slew won four years later and Affirmed won the next year in 1978. American Pharoah took the Crown in 2015 after 37 years without a winner. Finally in 2018 Justify was the last to win the coveted trophy.

George “Burt” Martin loves to travel to the member countries in the Commonwealth of Nations. He has visited eleven of them. Burt relocated to California after retirement, but he hails from a small market town in the Cotswolds of England where he lived in a house that was built in 1639.
PrevPreviousIn the Land of the Maples
NextMiss Grace and Her London ChurchesNext
2 Comments
Oldest
Newest Most Voted
Inline Feedbacks
View all comments
Bob Kozak

One of the great racehorses of all time, Man o’ War, won the Preakness and Belmont in 1920 but was not entered in the Kentucky Derby that year because his owner thought the distance of ten furlongs was too much to ask of such a young Thoroughbred.

This is a welcome surprise! I used to work at Pimlico as an massage therapist, working on the racehorses -and also the trainers, grooms and Exercise riders.Most native Marylanders (I am one) would probably say that Pimlico’s greatest day was the day in 1938 when Seabiscuit and War Admiral met in a match race. For anyone interested in Pimlico’s rich history, a wonderful source is a magazine called The Maryland Horse. If I remember correctlySecretariat’s stall in the Preakness barn is used each year for the Kentucky Derby winner prior to the Preakness.