and Her London Churches

A very rough comparison of the populations living in the United Kingdom and the United States would be 1 to 6. For every citizen in the UK there are six in the USA. All that aside, my suggestion is, the ratio of postcard collectors to citizens in the UK is much higher than it is here. There is no statistical source for this, it is simply an assumption based on the experience of being a member of at least two postcard clubs is both nations.

Here in America, I know only a few collectors of churches and religious buildings such as synagogues, temples, mosques, and other places of meditation, reflection, and worship. But about five months ago I had an extended email correspondence with a Maryland resident who asked me to call her Miss Grace. She collects only London (England) churches, cathedrals, and chapels.

As it happened, questions were asked and answered with openness and candor. It may seem an easy out, but since the topic was explored in a Q & A, perhaps, it should be reported as if it was an interview. So . . .

Postcard History:  What is the reason you chose to collect London churches?

Miss Grace:  I was born in London in 1938 just before the war began. My father was a fire warden, and he was seldom home at night. I don’t know how my parents met, but one early memory is that when we traveled throughout the city my parents always pointed to places (mostly churches) and told me a bit of family lore that happened “there.” One day when I was about five, we took a long trip to a place where my mother’s family lived. It was a special place, my mother said it was away from the war. I later learned it was a Welsh village named Pontypool.

Postcard History: What made Pontypool a special place?

Miss Grace: My grandfather was a vicar in an old stone church. I loved his church – it was always cool and dark inside – and I liked to sit at the end of a pew and listen.

Postcard History:  Listen? What did you hear?

Miss Grace:  Birds, mostly. And there was a family of racoons that lived under a fallen tree at the edge of the churchyard. They scurried everywhere and make quite a ruckus.

Postcard History: Why is this a vivid memory for you?

Miss Grace: Because after that trip, I lived with my grandparents until I was “old-enough” to go home again. I didn’t know what that meant at first, but I soon learnt that it meant that when the war was over, I would be old enough.

Postcard History: So, you collect church postcards because your grandfather was a pastor?

Miss Grace: Not a pastor, a vicar. And, in a church built of stone.

Postcard History: Tell me about your collection.

Miss Grace: I have about 500 cards. I like the ones that show the bell or clock towers the most. I have them sorted by the neighborhoods surrounding London.

[The correspondence took place over a period of three days in the fall of 2021. At one point I asked what cards were among her favorites, and the reply surprised me.]

“Just the plain simple ones. Sketches mostly. No colored ones except pastels or colored pencils,” she said.

I asked if she could send me some scans of her favorites, but the answer was no.

No proof exists that my dear Miss Grace had these cards in her collection, for I have sent additional emails asking the obvious question, but more than a month has passed, and no answer has been received.

Nevertheless, this Faulkner set is quite charming and deserves to be presented here as a historic postcard set. Comprised of twelve vertical cards the set is signed by an unidentified artist, except for an artist’s signature, C Robinson. (C Robinson could well be the 19th century engraver Charles Robinson who was born in London, circa 1840, and received his first art lessons from his father who was an accomplished wood carver. After his apprenticeship he worked for a variety of London and out-shire newspapers until, as was so quaintly stated in a gallery biography, his last illness.)

The twelve card titles are:

All Hallows Barking, near the Tower

The titles marked by an asterisk are illustrated below. 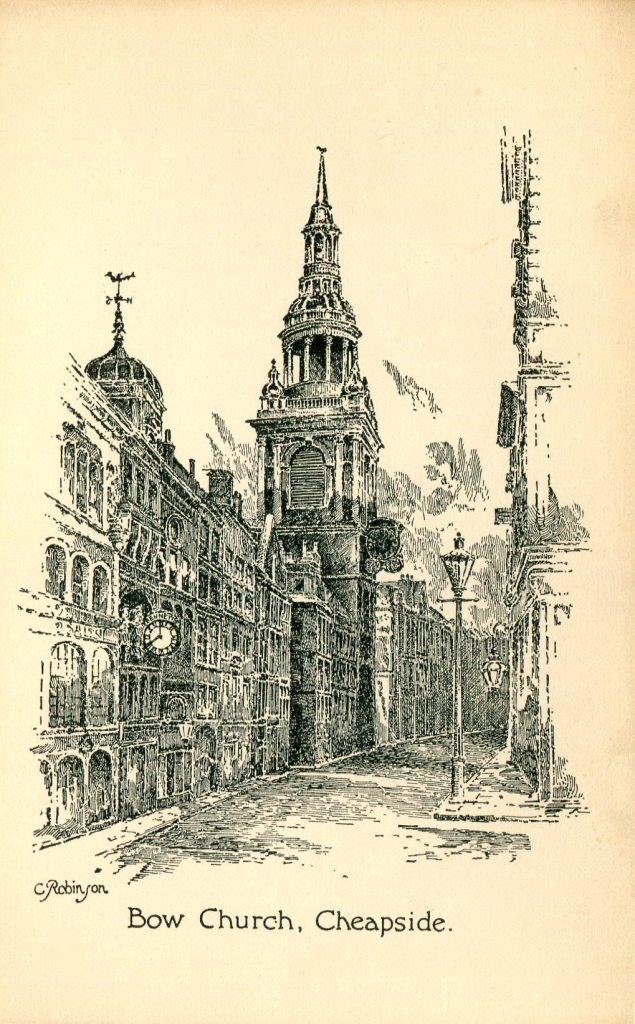 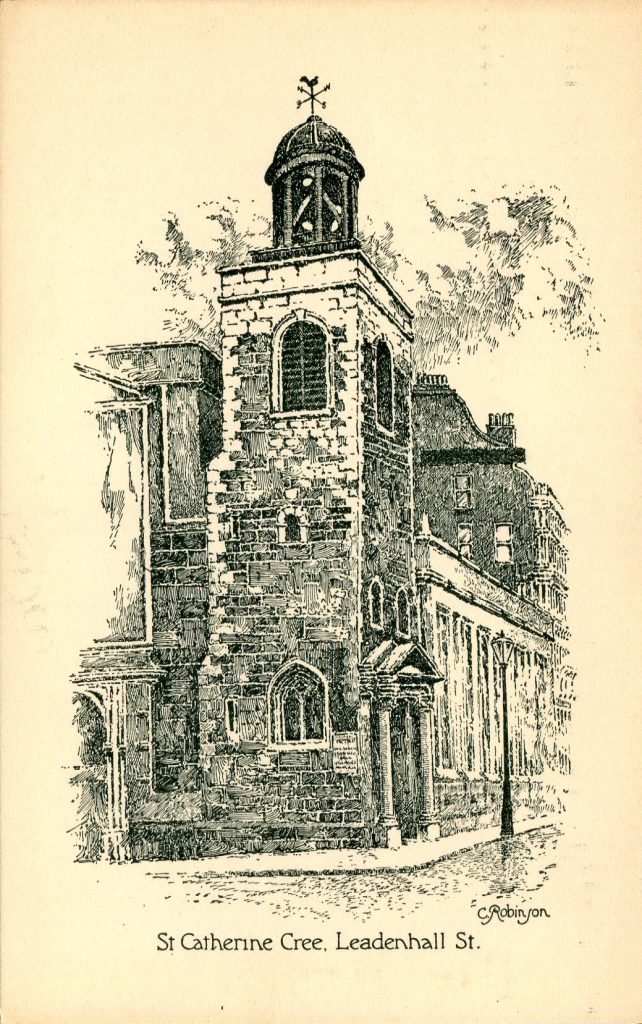 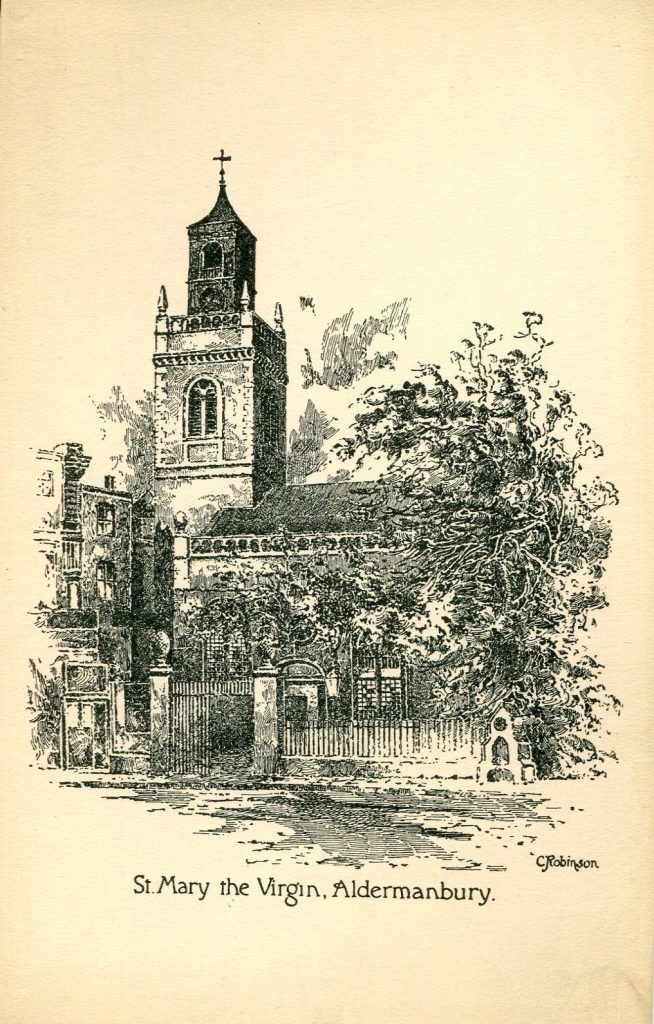 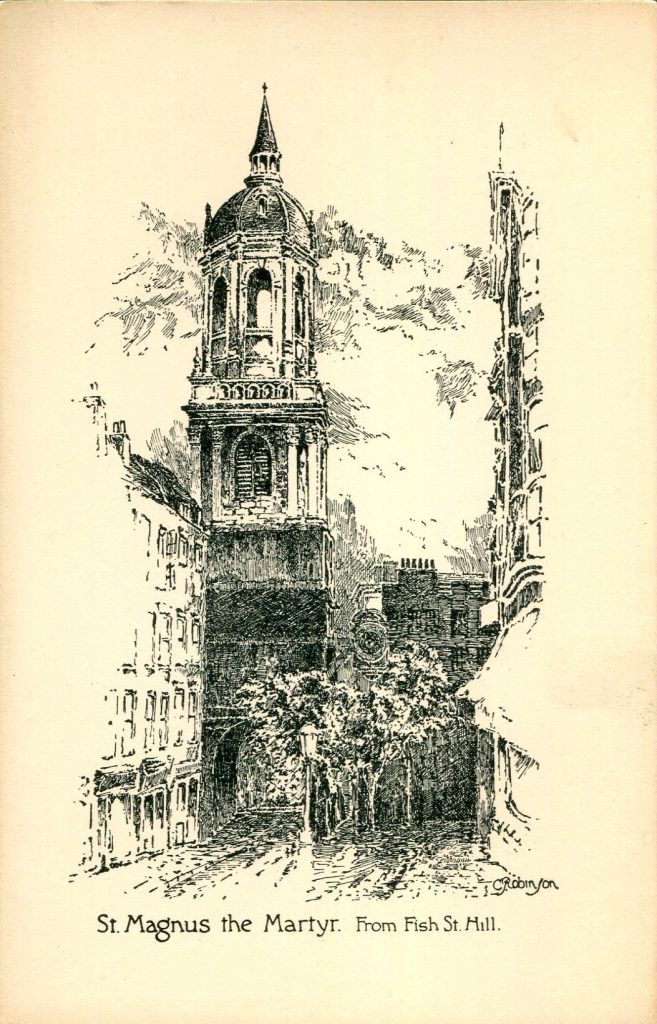 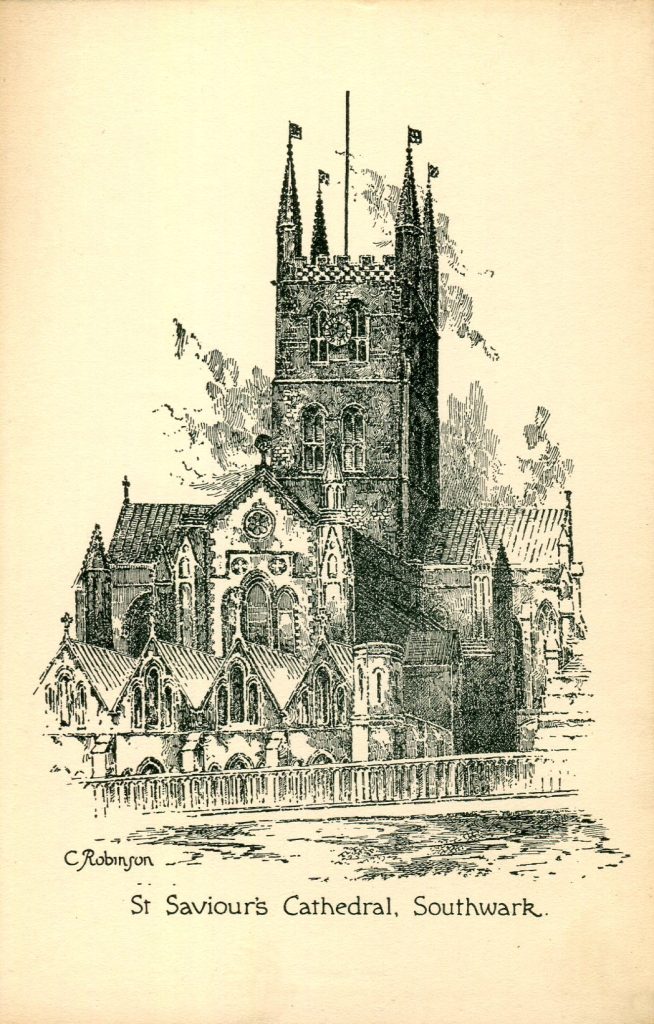 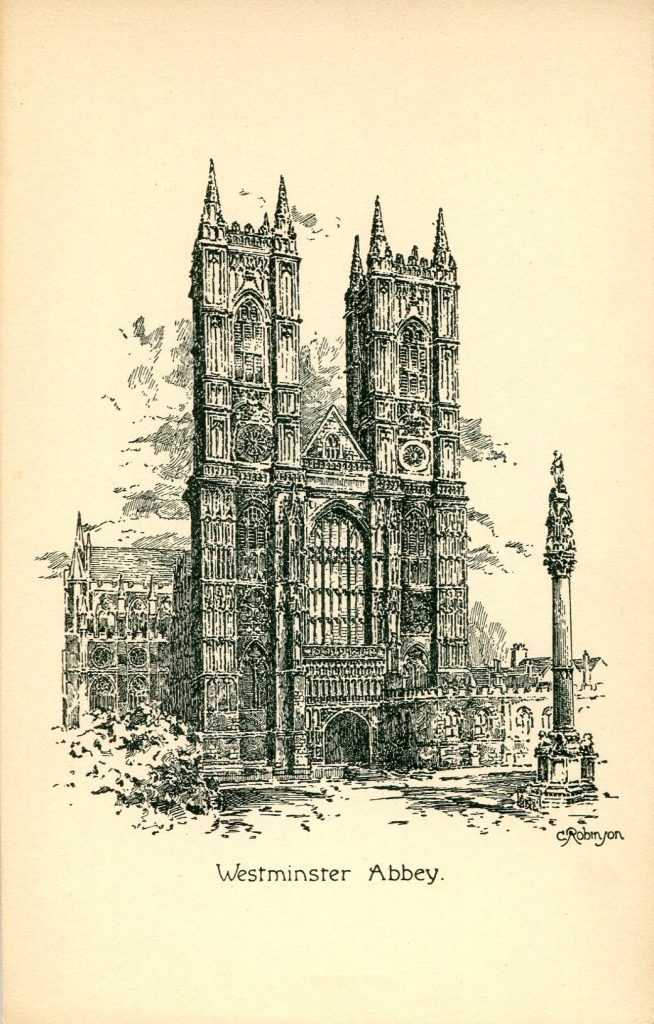 In the City of London and the thirty-two surrounding boroughs there are a few less than 515 registered churches that are part of London’s architectural heritage. Architects of world renown have for as many as nine centuries, designed and supervised the construction of these peaceful places that are today, soothing to the souls of a faster paced modern society.

Churches in the modern world have changed their missions in many ways. No longer are they sanctuaries for Christians alone, but for men of different faiths, even at times, the rogue or criminal. In addition to the ordinary religious services traditionally held on Saturday or Sunday mornings, many churches offer lunchtime and evening worship times. And too, churches often sponsor music programs, book clubs, collectors’ organizations, crafting events, and charity dinners.

Some are making church facilities available on Fridays for Muslin prayers.

Have you ever thought that collecting postcards may be a sacred task? I think, Miss Grace does!

The Staff of Postcard History offers this article for your enjoyment. It is a combined effort of many: our publisher, editor, webmaster and collectors/contributors far and wide. Please use the COMMENTS feature below to let us know how we're doing.
PrevPreviousThe Triple Crown Racetracks
NextGeneral Motors Company (GM) the pre-World War II yearsNext
4 Comments
Oldest
Newest Most Voted
Inline Feedbacks
View all comments
Hal Ottaway

Very interesting. I had no idea there were that many churches in the London area. On the other hand, I have a thick binder of churches on postcards from my hometown, Wichita, Kansas, and so for London, there truly would be this number and probably more, as well. Loved hearing about Miss Grace and hope you will have a response from her soon.

The term “Cockney” properly refers to those who live within hearing range of the “Bow Bells” featured by the Church of St. Mary-le-Bow in Cheapside.

Lovely story of Miss Grace and her churches

The sketches are awesome. Live that type of art. I collect cards with sketches of historic buildings of India. Please put your collect on a web page and share