How many times have postcards been the subject
of a front-page story in The New York Times?

Only once to my knowledge and that occasion was the grandest wedding ever held in Washington, D.C. when Alice Lee Roosevelt, daughter of President Teddy Roosevelt, married Congressman Nicholas Longworth, a member of the House of Representatives. The wedding took place on Friday, February 17, 1906. The postcard story? Well, keep reading.

Alice Roosevelt
Alice Lee Roosevelt was born on February 12, 1884, in New York City, the first and only child of Alice Hathaway Lee and Theodore Roosevelt. Theodore at the time was an assemblyman in the New York State legislature. The family home was on 57th Street, just about where the Bergdorf Goodman department store is now.

Alice’s birth was attended by two tragedies: On February 13th, Theodore’s mother died of typhoid and the very next day, his wife died of Bright’s disease, an acute inflammation of the kidney. The baby was named Alice Lee in memory of her mother.

Until she was three, Alice was raised by her Auntie Bye (Theodore’s sister, Anna Roosevelt), with regular visits to her maternal grandparents in Boston. In London, on December 2, 1886, Theodore remarried. His new bride was his childhood sweetheart Edith Kermit Carow, and Alice came to live with her father and stepmother. The new family moved into Sagamore Hill, the house that Theodore had built at Oyster Bay overlooking Long Island Sound. Five children were born to Edith and Theodore: Theodore, Jr. (1887), Kermit (1889), Ethel (1891), Archibald (1894), and Quentin (1897).


Teddy’s Rise to Power
In his early days Theodore mixed politics with free-lance writing. Between 1882 and 1889 he authored eight books. His professional political career resumed in May 1889 when President Harrison appointed him a civil service commissioner, a reward for his steady efforts on behalf of the Republican Party. In 1895, Roosevelt became the President of the Board of Police Com­missioners in New York City.

His rise to national prominence began when President McKinley offered him a position as Assistant Secretary to the Navy. He resigned that post in May 1898 to organize the first volunteer cavalry regiment, the Rough Riders, and came back from the Spanish-American War as “Teddy” – a national hero. In quick succession, he was elected Governor of New York, nominated for Vice President on McKinley’s ticket in 1900, and sworn in as President after McKinley was assassinated in September 1901.

Princess Alice
When her father became President, Alice was 17 years old. “I was the daughter of an enor­mously popular President,” she remarked, “and the first girl in the White House since Nellie Grant, and I looked upon the world as my oyster.” Alice attracted national attention. She herself later attributed that publicity to her unique circumstances: “There was no Hollywood and there were no movie stars in those days. They liked my father and there was I having a good time and not really giving a damn.”

Alice inherited the impetuousness and energy of her father. In most ways she seemed to defy the rather strict conventions of the time, especially as they applied to young women. The public loved it. When her father forbade her to smoke cigarettes in the White House, Alice took her cigarettes to the White House roof. When a visitor to the White House asked the President, “Isn’t there anything you can do to control Alice?” he replied, “I can do one of two things. I can be President of the United States, or I can control Alice. I cannot possibly do both.”

The public, predictably, speculated about Alice’s future husband. Who would be an appropriate mate? Who, indeed, would be willing to marry such a headstrong young woman? The newspapers suggested a steady stream of suitors, many of whom were members of European royalty. Prince Henry of Prussia, brother to the Kaiser, was a prime candidate when he visited the United States in 1902. Other possibilities included Prince George of Greece and several of the brothers of the Czar of Russia. Her father would never have approved of a marriage to a foreigner, but whether that would have stopped Alice is probably questionable. A “proper” American suitor did, however, soon appear.

Nicholas Longworth
Nicholas Longworth was born in Cincinnati, Ohio, on November 5, 1869, the son of Nicholas and Susan Walker Longworth. Nicholas graduated from Harvard in 1891 and received his law degree from the Law School of Cincinnati College in 1894. First elected to the Ohio legislature as a representative (1899-1901) and then as a senator (1901-1903), he became the Representative to the U.S. Congress from the first Ohio district in 1903. He held that position until 1913 when he was defeated, but he was re-elected in 1915 and served until his death in 1931.

Alice and Nicholas met in Washington. Fourteen years her senior, Nicholas was tall, bald, from an excellent family, and most importantly, a Republican. The two became publicly linked when they were members of a tour to the Orient organized by Secretary of War William Howard Taft in the summer of 1905. Supposedly, Alice’s interest in Nicholas was enhanced after he risked his life to save a fellow tour-member from drowning in the ocean.

On December 13,1905, President and Mrs. Roosevelt officially announced the engagement of Alice and Nicholas. The wedding was to be February 17,1906.

The Ceremony
The ceremony took place in the East Room of the White house before an estimated 800 guests. Along one wall an altar had been created on a small platform. The room was decorated primarily in green and white. At exactly four minutes after noon, the Marine Band struck up Richard Wagner’s wedding march and the bridal party appeared. Alice, on the arm of her father, the President, wore a white satin dress with a yoke and trimmings of cream colored rose point lace and a diamond necklace. Her train was silver brocade satin in a flower design which fell from her shoulders and trailed her for about three yards. Her veil was held in place by coronet of orange blossoms.

At the altar she was met by Nicholas dressed in a frock coat with black trousers, pearl-gray gloves and a pearl tie. Together they turned to face Bishop Henry Y. Saterlee of the Protestant Episcopal Diocese of Washington. Despite the size of the room and the assembled crowd the responses of the two were clearly heard by all, as were the final words of Bishop Saterlee, “I pronounce thee man and wife.”

The couple left the White House at 4 PM after an intricate series of maneuvers involving four automobiles successfully fooled most of the crowd gathered outside. Instead of exiting as the crowd anticipated, Alice and her husband stepped through an open window in the Red Room onto the back steps of the White House and were whisked away in a limousine owned by John R. McLean. The couple spent their first night at McLean’s country home, Friendship, just outside of Washington. From there it was a train to Key West and a steamship to Cuba for their honeymoon. 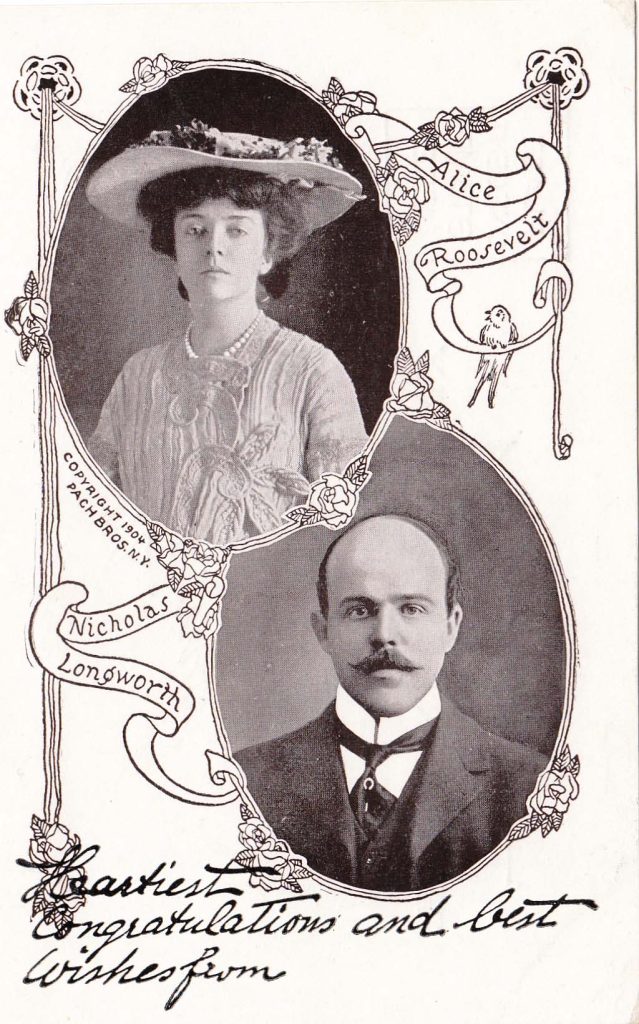 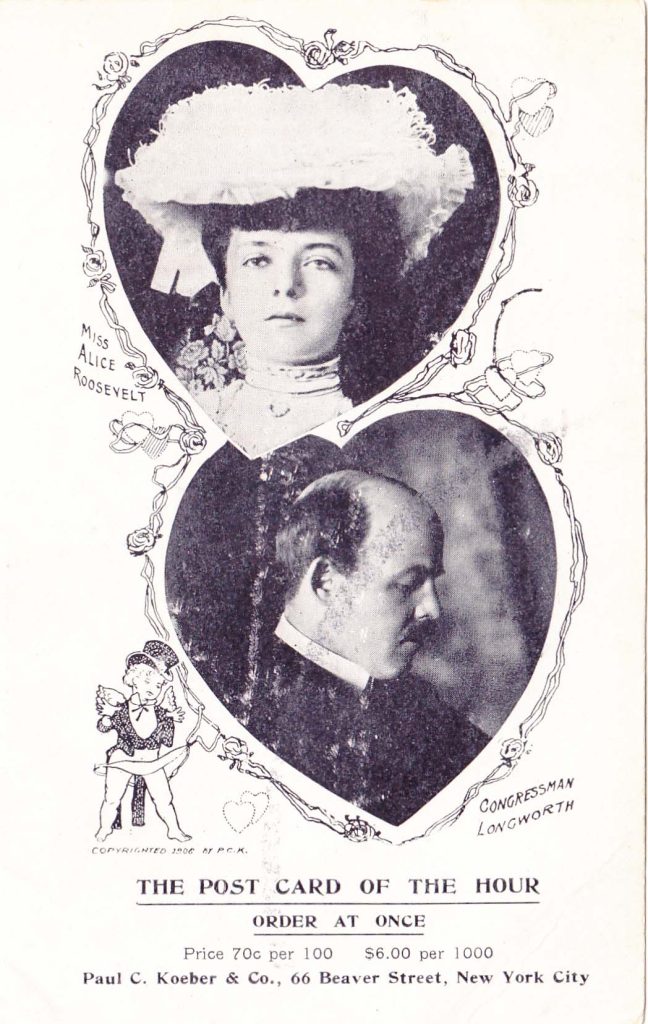 The Postcards
On February 8,1906, the front page of The New York Times carried the following:

Wash., Feb. 7: A New York firm of photographers
has placed on sale in Washington postal cards
bearing the photographs of Congressman
Nicholas Longworth and Miss Alice Roosevelt.
Tourists are buying them by the hundreds.
Some have printed on the address side in
semblance of handwriting the address:
“Mrs. Nicholas Longworth.
White House
Washington, D.C.”

The cards have vignetted portraits of the
Congressman and Miss Roosevelt, decorated
with roses, scrollwork, cooing doves, and at
the bottom the words in script:
“Heartiest congratulations and best wishes
from (a blank space for a signature).

”Several of the cards were received at the White
House today.

The cards referred to in the Times story were published by Pach Brothers, New York, and are known in two versions; one shows the imprinted version; the same design was also produced without the imprint. At least one other publisher took advantage of the occasion, the Paul C Koeber Company. The Koeber was also available prior to the wedding for one has been found with the date of February 3, 1906. Also, Franz Huld issued a commemorative entitled A White House Wedding.

Later Years
Nicholas served in the House of Representatives from 1903 to 1913 and then again from 1915 until 1931. He was defeated in 1912, the year that Teddy ran on the Progressive or Bull Moose ticket. Nicholas remained Republican while Alice supported her father. After Nicholas’s re-election, he served as Speaker of the House in the 69th, 70th, and 71st Congresses.

At age 41, after 18 years of marriage, Alice Longworth gave birth to a daughter, Paulina Longworth, on February 14, 1925. There was hope that Princess Alice might return to the White House if President Coolidge would name Nicholas as his successor. But Coolidge remained quiet and the nomination at the 1928 Republican convention went instead to Herbert Clark Hoover.

In April 1931, while on vacation in Aiken, South Carolina, Nicholas contracted pneumonia, sank into a coma, and died on April 9. Ohio Republicans urged Alice to run for her husband’s congressional seat, but she declined to do so.

Alice eventually settled permanently in Washington, D.C., where she was known, according to The New York Times, as “among the capital’s most constantly fascinating personalities, renowned for her caustic wit, her happy iconoclasm and her influential political connections.”

Professor George Miller, University of Delaware, an accomplished collector and a frequent contributor to a national postcard magazine, has granted Postcard History permission to republish his writings from the 1980s and ‘90s. We are proud to offer his work to our audience. His postcard history lessons are timeless!
PrevPreviousFinding Those Dam Cards – The Story of a Search
NextWhatever Happened to Little Chef?Next
4 Comments
Oldest
Newest Most Voted
Inline Feedbacks
View all comments
Bob Kozak

Alice is famous for saying, “If you can’t say something good about someone, sit right here by me.” She also referred to Thomas Dewey (who “defeated” Harry Truman according to a famous 1948 headline) as “the little man on the wedding cake.” Imagine her living long enough to see her tweets going viral on Twitter!

Interesting article and good postcards. I collect postcards of places I have visited in America & Canada.and have 2 of those postcards in my collection