The Story of a Search

The phone rang early Sunday morning, the day after a Pennsylvania postcard show at which three new acquaintances were made. It was 8:22. Okay, thinking better about scolding whomever it may be for calling in the “middle-of-the-night.” We are not early risers at my house.

Caller: “I only have five. I thought there were more, but there’s only five.”

Caller: “Oh, I’m sorry. I thought you would recognize my voice, this is Andy.”

“I already have a collection started, but I only have a few.”

Since Postcard History Online Magazine is soon to be three years online, it has become second nature for me to ask, “Would you like to write an article about your fill-in-the-blank cards for Postcard History?” In Andy’s case, it was his Dam in large letters cards that he was asked to write about.

Andy seemed pleased that he was asked, but he said, no. He thought that he should wait until he found a few more.

Our conversation the next day lasted another few minutes as he explained to me that he had searched all afternoon and never found another card. I told him I was sorry that he was unsuccessful, but before we ended the call, I asked him to tell me the names on the five cards he has.

With lightning speed, he rattled off, “Kentucky or Paducah, they’re the same you know; Boulder and Hoover, they’re the same place too, then there are Grand Coulee and the Norris. So that is really only four places, but there are varieties of the Norris and the Coulee. I’m pretty sure that’s all there are!”

My last question was, “So you mean the word “Dam in Large Letters” only appears on cards from four places, right?”

There was a brief silence, then Andy answered, “I’d swear to it!”

I’m not one to speak in absolutes, lessons have been learned on that score, but based on Andy’s oath that there are only five large letter postcards with the word Dam in large letters, I have based this suggestion to explore on his word. Let’s work to prove or disprove Andy’s theory. In our hobby there is always someone who finds another postcard.

Yesterday, I did a bit of sleuthing around the office here at Postcard History and five is exactly the number of Dam cards I found. Way-to-go Andy!

The Kentucky Dam is about 22 miles from Paducah, Kentucky. It is operated by the Tennessee Valley Authority and serves to impound the Tennessee River. The reservoir it holds is Kentucky Lake. It stands 206 feet tall and is 8,422 feet wide. Construction began on May 1, 1938.

The Grand Coulee Dam is in Washington state nearly 90 miles west of Spokane, in the northeast quarter of the state. Operations are managed by the United States Bureau of Reclamations. It impounds the Columbia River. The structure is 550 feet high and spans a fraction more than 1.6 miles. Construction began in 1933 and finished nine years later when power service and irrigation control commenced. There are two reservoirs behind Grand Coulee Dam: Lake Franklin Delano Roosevelt and Banks Lake; Frank Banks was the supervisor of the dam’s construction team. 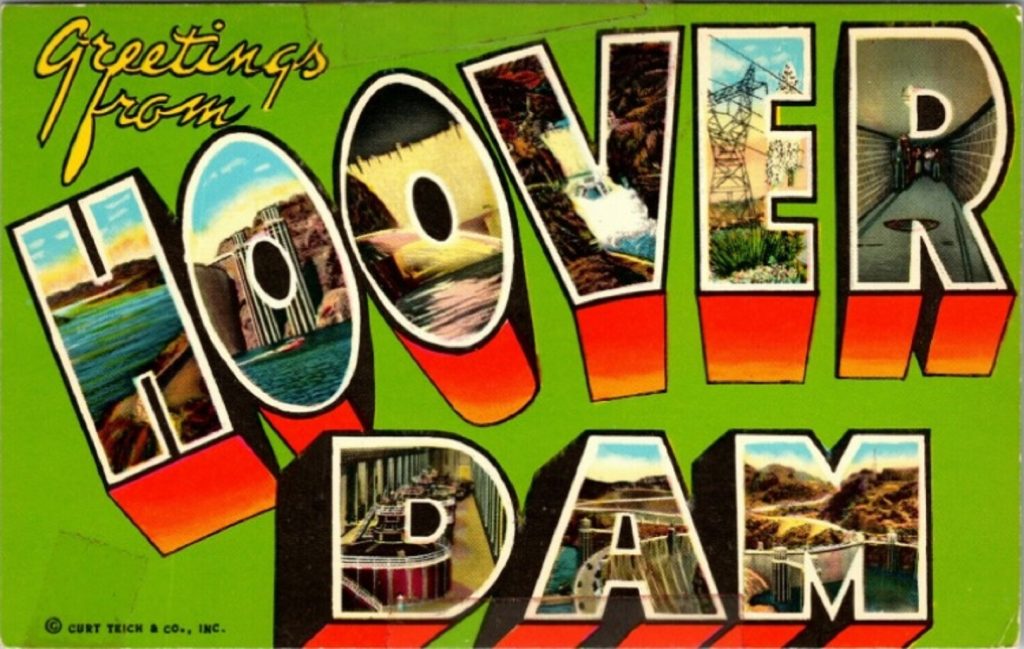 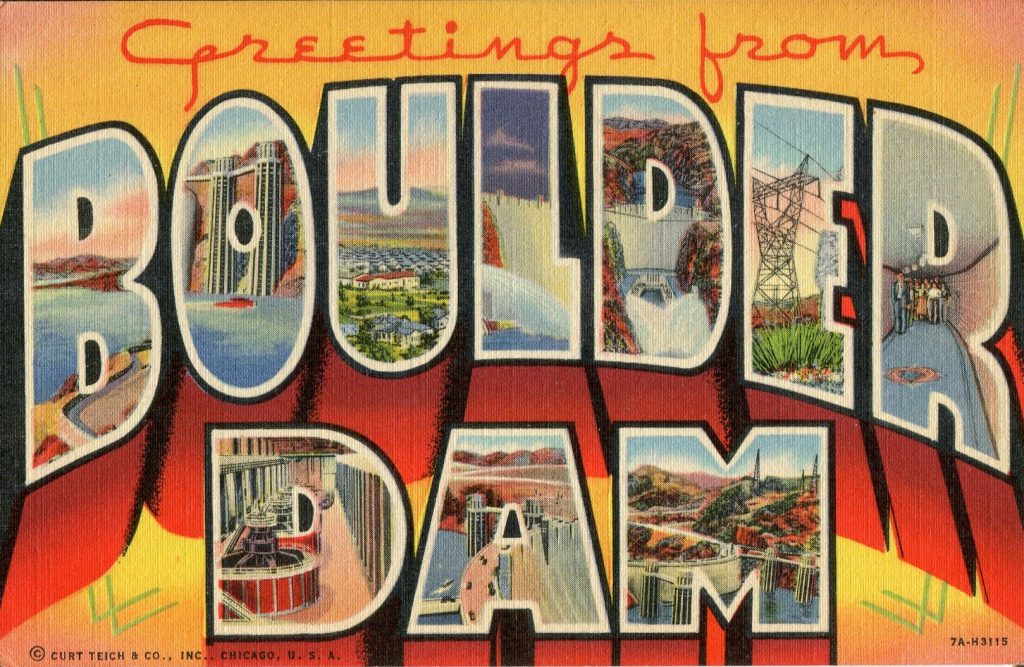 The name Hoover Dam was how Congress referred to the construction project they approved in 1931. It was dedicated in 1936 during the Roosevelt Administration and it was they who renamed it Boulder Dam. The Hoover name was restored by an act of Congress in 1947. Like the Grand Coulee, Hoover Dam’s operations are managed by the United States Bureau of Reclamations. It is located just over 30 miles east-southeast of the City of Las Vegas in Nevada. The construction design – an arched dam – was among the first in North America. An arched dam is one that is curved upstream. The arch characteristic directs most of the water pressure against the walls of the river canyon instead of on the dam. The dam impounds the Colorado River and creates the Lake Mead reservoir.

The Norris Dam is a flood control operation managed by the Tennessee Valley authority in the eastern half of Tennessee, somewhat northwest of Knoxville. By comparison it is small, only 265 feet tall and just over a quarter-mile wide. It impounds the Clinch River that flows southwest from the Appalachian Mountains to the Tennessee River. The Norris Dam project is notorious for its aftermath of lawsuits and broken promises. Some of the cases concerned land acquisition methods used by the TVA that forced changes that are still used today. The Norris Dam, to the best recollection of two art historians, is the only national construction project ever to become the subject of a photography exhibit at the Museum of Modern Art in New York.

I liked this article and I have been trying to figure out of I know Andy also?? We all have hobby friends who are interesting, don’t we?

Refer to the 174 page hardcover color reference book, Large Letter Postcards. This amazing effort by the late Fred Tenney and associate Kevin Hilbert will have one quickly educated on offerings for examples as these.

I think the collecting “sweet spot” is enough of X is out there, but it takes a fair amount of searching to find them. I have been collecting “real photo” postcards of steam locomotives with the crew posing with them for exactly one year, from eBay and postcard shows. So far, I have 68. Most of these were bought early on, and who knows how long they were up for sale before I came along? So today, I’m lucky to find one I want every few weeks. So that is my “sweet spot”…finding just enough to keep me happy searching,… Read more » 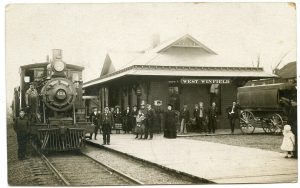 If I ever run across another large-letter card featuring the word DAM, I’ll try to return to this article and post my discovery.

Well, I knew I had some of those DAM cards myself. I have the Gigantic Kentucky Dam, Hoover Dam, Boulder Dam and The Norris Dam. Now hears the thing; I have The Grand Coulee Dam but it is a totally different card. It’s from the C.P. Johnston Co. Seattle, Washington 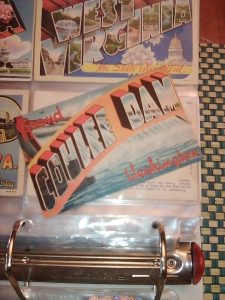 Great story on the “Dam Cards” now how many of us will go out and look for that 6th card. I love a challenge.

I also have the linen Grand Coulee Dam card that is shown in the comments. 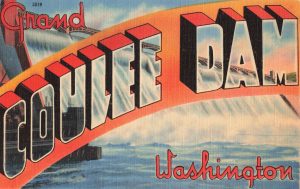 I have the Kentucky Gigantic Dam card in both linen and chrome versions.