A Letter from Your Editor

March 15, 2021. It is unlikely that you have a specific memory of that day. If you do remember thirteen months ago, you recall that most of the country was locked-down due to the Covid-19 pandemic, and we were on the edges of despair and gloom.

On that day Postcard History published an article about a postcard showing the Roman Calendar. (The link if you care to revisit it is: https://postcardhistory.net/2021/03/the-ides-of-march/. The postcard is an ugly one and at a casual glance it looks much like a drawing done by a three-year-old.

The article was titled The Ides of March and a list of events was included in the text. So was an explanation of suspicions about days of the months and how the Romans calculated time and recorded important events. Two things you learned from the explanation was that only a few months (ones with 31-days, but not all of them) have an “ides,” and the ides of a month are not always the 15th.

Tomorrow will be April 15th. There is no Ides of April, there are no suspicions about the day, and although most Americans do not fear the day, most of us don’t like it much. April 15 has come to be known as Tax Day.

Calculations have been made which are unsubstantiated but are widely believed that Americans earning money must work 46 days each year to satisfy their tax liabilities. This concept has become so widely accepted that it has been named – Tax Liberation Day. And that is only the federal, state, and local levels of taxation. If you want to include sales and excise taxes add another 15 days of work. And, the United States is not even in the top-ten of the countries that have income taxes. There are 24 other nations with higher percentages of taxes collected.

Congress first imposed income taxes in the United States in 1862. They needed money to finance the Civil War. It didn’t take long for the legal establishment to interfere, and the courts deemed the tax unconstitutional because it was inconsistent across all states.

Early in  the Wilson Administration, with the 16th Amendment, known as the Revenue Act of 1913, a one-percent income tax was imposed on all earnings exceeding $3,000. If you made $500,000 or more, you paid six-percent. At the time the deadline to file your federal tax was March 1st. Five years later the date changed to March 15th and then in 1955 it changed again to April 15th – for no apparent reason. This year, the 2021 deadline is April 18th.

Have you noticed, there are no postcards illustrations with this article? It was our goal to find postcards that were humorous or amusing, but such cards do not exist and if they do, they are difficult to find. We even consulted the Google Images website and it holds 88 million images. Obviously, not all those millions were examined, but there were no postcards among those we looked at. It seems that no one finds the IRS a fun topic.

So the best we can do is this one Washington News Agency “white-border” showing the national headquarters at 1111 Constitution Avenue, Northwest, Washington, D.C.

The card is not much to look at but there may be some consolation in knowing that your name is on file and can be accessed by a computer that belongs to the UnHumorous, UnFunny, and UnAmused Internal Revenue Service.

The is one other, that I know of, it is of the IRS Service Pier in Baltimore Maryland 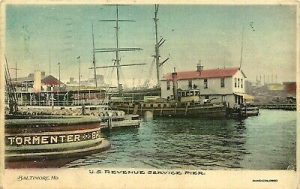