The Centennial of the United States Aircraft Carrier

In 2022 Americans will celebrate the centennial of the United States Navy’s aircraft carrier. Norfolk, Virginia, figures heavily in the history of these mighty ships. On March 20, 1922, following a two-year conversion at the Norfolk Naval Shipyard (actually across the Elizabeth River from Norfolk in Portsmouth), the former USS Jupiter (a collier) was recommissioned as the first navy aircraft carrier – the USS Langley.

I want to share several postcards of Navy aircraft carriers that were homeported in Norfolk at sone time in their illustrious career. Newport News Shipbuilding, across Hampton Roads from Norfolk, has built a number of aircraft carriers for the Navy including all ten nuclear Nimitz class carriers. The Norfolk Naval Shipyard repairs and overhauls the carriers.

In 1961, the Navy celebrated the 50th anniversary of naval aviation by the carriers Intrepid (Essex class), and the Saratoga and Independence (Forrestal class) sailing in formation. The crews and planes of the three vessels were lined up on deck, with the crewmembers spelling out Naval Aviation, 1911 – 1961. Note the difference in size between the Intrepid (top) and the two Forrestal class super carriers.

This card shows a jet fighter launched from the deck of the Antietam (Essex class) at night. According to the caption, “eight hundred Sylvania flashbulbs were fired by radio pulse which simultaneously tripped the shutter of a Fairchild camera mounted in the gondola of a blimp. Photolamp and electronic engineers of Sylvania Electric Products Inc. planned and executed this unusual photographic project.”  The postcard dates from the early 1960s.

Three Midway class carriers, Midway, Franklin Roosevelt, and Coral Sea were completed shortly after the end of World War II and at the time were the largest ships in the world. Each one incorporated improvements to the Essex class carriers that were learned the hard way during World War II battles. When commissioned, the Midway class carriers displaced 45,000 tons and were 968 feet long. The Franklin Roosevelt was decommissioned in 1977 while the Coral Sea and Midway continued serving in the fleet until the early 1990s. The Midway is now a museum ship in San Diego and is well worth the visit.

The Enterprise, the Navy’s first nuclear powered aircraft carrier, was the longest naval vessel ever constructed and built by Newport News Shipbuilding. Commissioned in 1961, Enterprise served until 2012. The Navy originally planned five more ships in her class but cancelled them due to the massive cost of constructing the Enterprise and went back to the drawing board. The Big E had eight nuclear reactors while the succeeding Nimitz class carriers only have two. Due to radioactive contamination issues, Enterprise currently sits at Newport News Shipbuilding while the Navy develops a disposal plan. 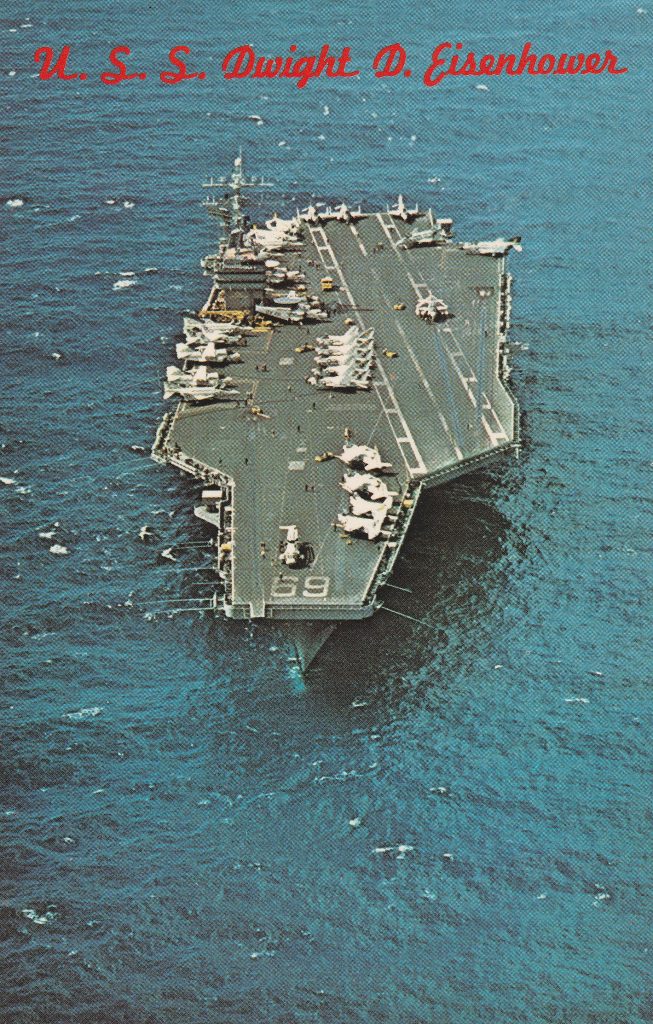 Daniel P. Hennelly is a mystery and science fiction writer from Norfolk, Virginia. A retired university administrator, he has collected postcards since his 1960s boyhood. He specializes in vintage United States postcards. Also, he has an extensive collection of foreign cards he started after receiving a gift from a 1930s honeymoon tour in Europe.
PrevPreviousSheridan’s Ride To the Battle at Cedar Creek
NextA Letter from Your EditorNext
7 Comments
Oldest
Newest Most Voted
Inline Feedbacks
View all comments
Stefan Sommerfield

Excellent history of aircraft carriers US was smart enough to start developing naval aviation early. Most naval officers in the 20’s believed in battleships as the key capital ships. Fortunately carriers continued to evolve producing the Essex Class, critical to victory in the Pacific in WW2. Postcard images are great.

Little would I know an Alameda, Ca, drugstore postcard purchase showcasing base and carrier assignment was the launch of postcard collecting. Full thrust took another decade. Positions in Public Affairs and Personnel were experienced on the west coast (Ranger) and Saratoga (east coast).

These remain the only ‘modern’ cards in my albums.

Since i attended college in the Norfolk area, this article brought back some memories. Our men’s JV basketball team occasionally played Newport News Shipbuilding.

Interesting article. It has been a few years since I visited a carrier. I remember being impressed by the size of the ships and the engineering that makes them work. The current ships are essentially a nuclear power plant that is able to move an airfield anywhere in the world that has ocean access.

One of my pleasures in life is when I visit this group. Such a pleasure to escape the everyday foibles and problems and share in universal joy of postcards!

Thanks for a great article, Dan. I love historic Navy postcards and have written about there history in the past but, sadly, have not concentrated on Aircraft Carriers. The U.S.S. Antietam card and your explanation was great! Enjoyed reading all about there great 100 year history!

Excellent article Dan! Interesting information about US naval carriers. I worked on the Eisenhower when I was in Radcon at the Norfolk Naval Shipyard in the late 70’s.