Sheridan’s Ride
To the Battle at Cedar Creek

Harper’s Weekly that proclaimed itself the Journal of Civilization was published in New York City by the Harper Brothers. The first issue was dated January 3, 1857. The content of the Weekly was mostly political news, but also domestic news and foreign correspondence. Features often included fiction and essays on many topics, including humor and many of these literary pieces were accompanied by illustrations by then well-known illustrators like the Waud Brothers, William and Alfred, as well as Theodore Davis.

During the American Civil War, Harper’s Weekly enjoyed a very large readership because of their thorough and exact reporting. The editorial position on slavery was a moderate one for there was no desire on the part of the editors to offend their readers in the South. Even so, Harper’s took a literary beating from the abolitionist publications that often referred to them as “Harper’s Weakly.” In its early years, the publication supported the Douglas campaign against Lincoln, but when the war began it stood fully in support of Lincoln and the Union.

Among the ranks of active Civil War era authors and poets stood the likes of Walt Whitman, Ambrose Bierce, Sydney Lanier, and Julia Ward Howe, but behind the genius were dozens of lesser talents. One was T. Buchanan Read, a much-respected Pennsylvanian whose talents bridged the artistic and literary worlds.

Thomas Read was born in March 1822 near Dowingtown, Pennsylvania. If you give credence to the Traditions of Devonshire, Thomas was a Monday’s child fair of face with a Thursday’s child prospect for life. He was an artist, a writer, and poet. He flourished in the 1860s and ‘70s from his studies and travels in Europe, and his association with the Pre-Raphaelite Brotherhood anchored his reputation in the art world.

Read was much conflicted over the inhumanity he witnessed during the American Civil War, and his poetry bears witness to the mental anxiety that he lived with the rest of his life. He took solace in his portraiture (mostly of fellow literary personalities) but travel was his best and most curative medicine. Late in 1871, while in Florence (Italy), Read was involved in a carriage accident in which he was seriously injured. The first passage for home he found came in early 1872, but the trip was more than his weakened body could tolerate. He contracted pneumonia while at sea returning to America and died in early May at age 50.

Read’s most financially successful poem was Sheridan’s Ride. It was written in only a few hours and based on the report of General Philip Sheridan’s ride to the battle of Cedar Creek. Read gathered the content from a Harper’s Weekly account published on November 5, 1864.

Up from the South, at break of day,
Bringing to Winchester fresh dismay,
The affrighted air with a shudder bore,
Like a herald in haste to the chieftain’s door,
The terrible grumble, and rumble, and roar,
Telling the battle was on once more,
And Sheridan twenty miles away. 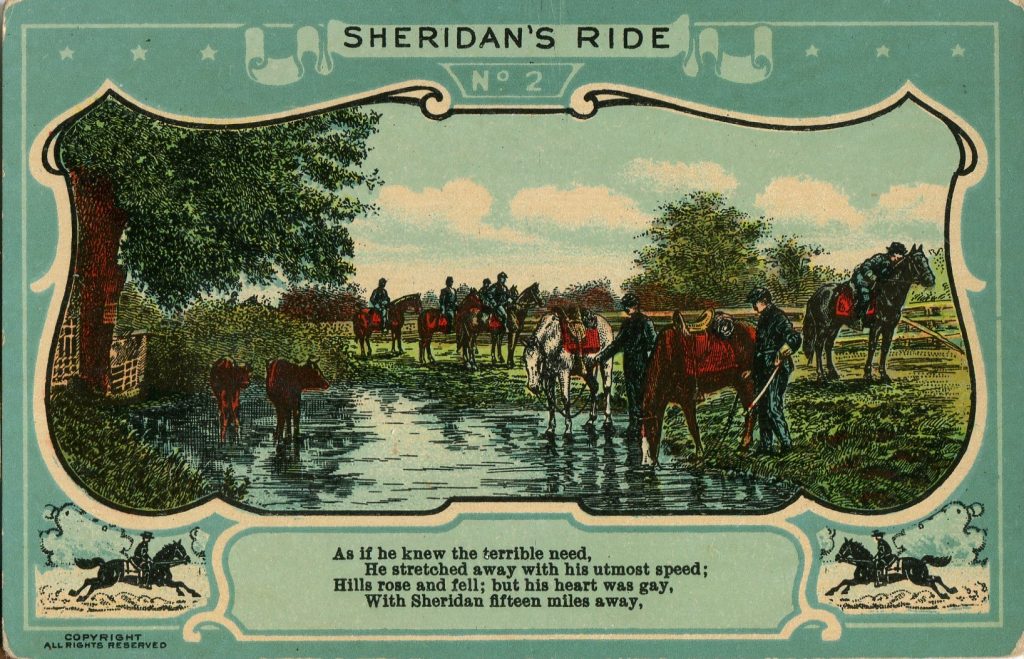 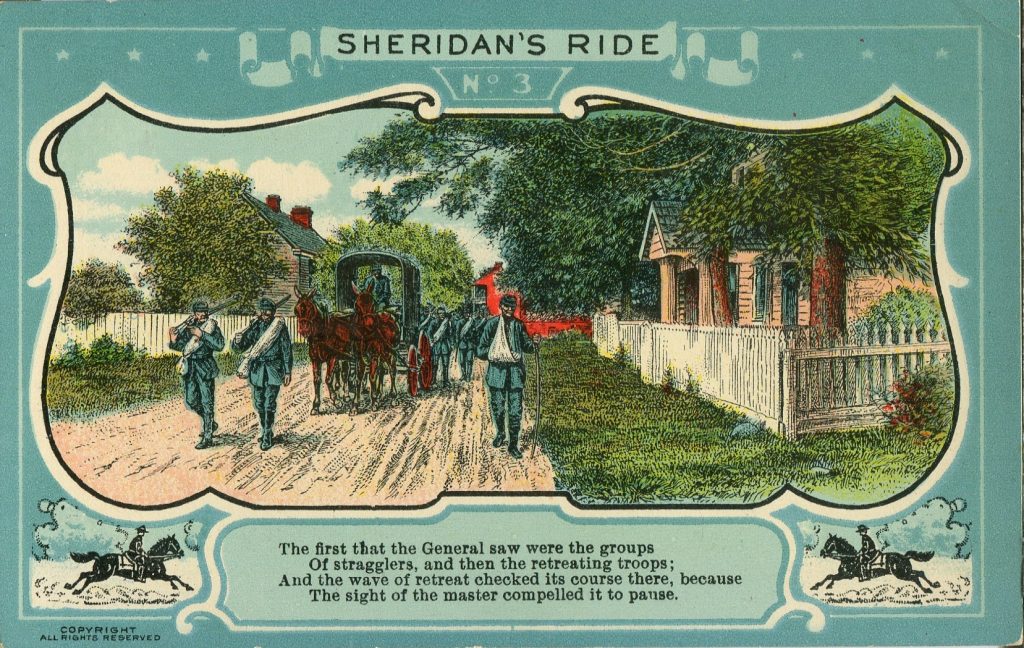 And wider still those billows of war
Thundered along the horizon’s bar;
And louder yet into Winchester rolled
The roar of that red sea uncontrolled,
Making the blood of the listener cold,
As he thought of the stake in that fiery fray,
With Sheridan twenty miles away. 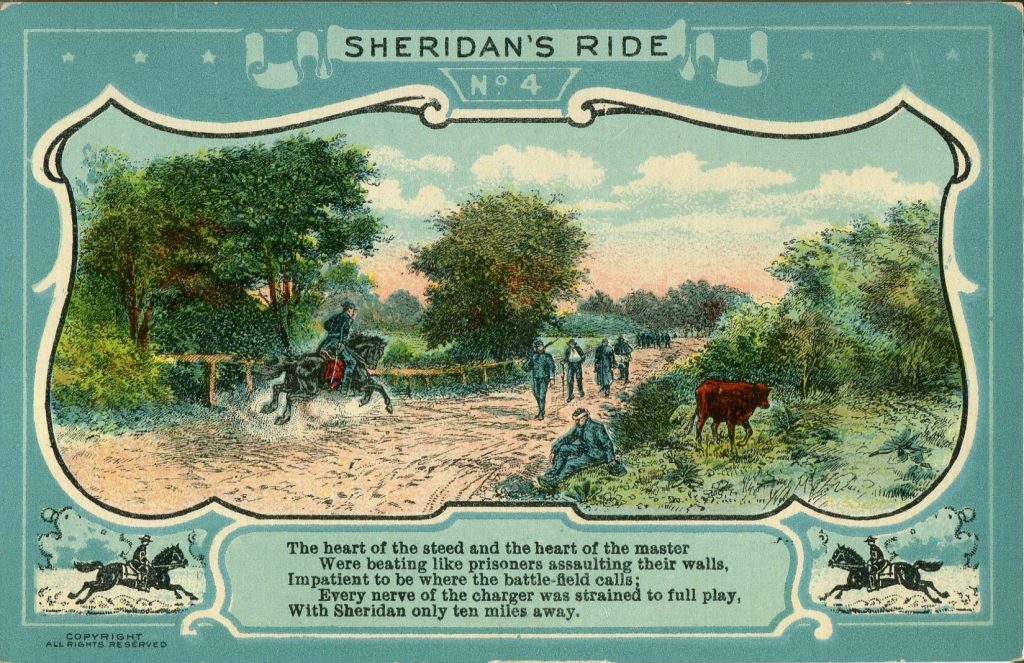 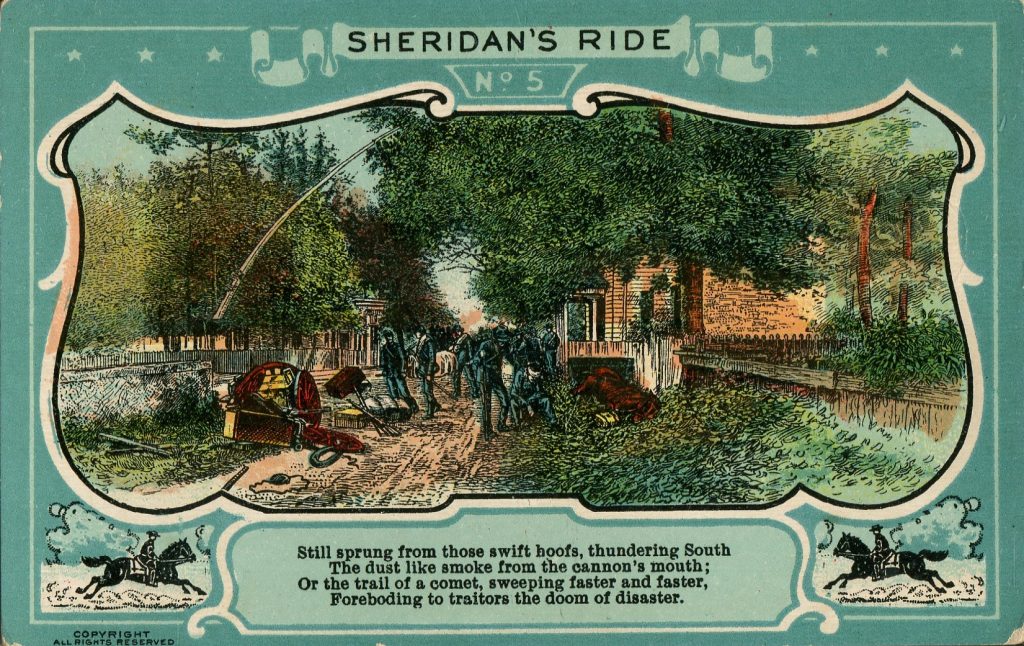 But there is a road from Winchester town,
A good, broad highway leading down:
And there, through the flush of the morning light,
A steed as black as the steeds of night
Was seen to pass, as with eagle flight;
As if he knew the terrible need,
He stretched away with his utmost speed.
Hills rose and fell, but his heart was gay,
With Sheridan fifteen miles away.

Still sprang from those swift hoofs, thundering south,
The dust like smoke from the cannon’s mouth,
Or the trail of a comet, sweeping faster and faster,
Foreboding to traitors the doom of disaster.
The heart of the steed and the heart of the master
Were beating like prisoners assaulting their walls,
Impatient to be where the battle-field calls;
Every nerve of the charger was strained to full play,
With Sheridan only ten miles away. 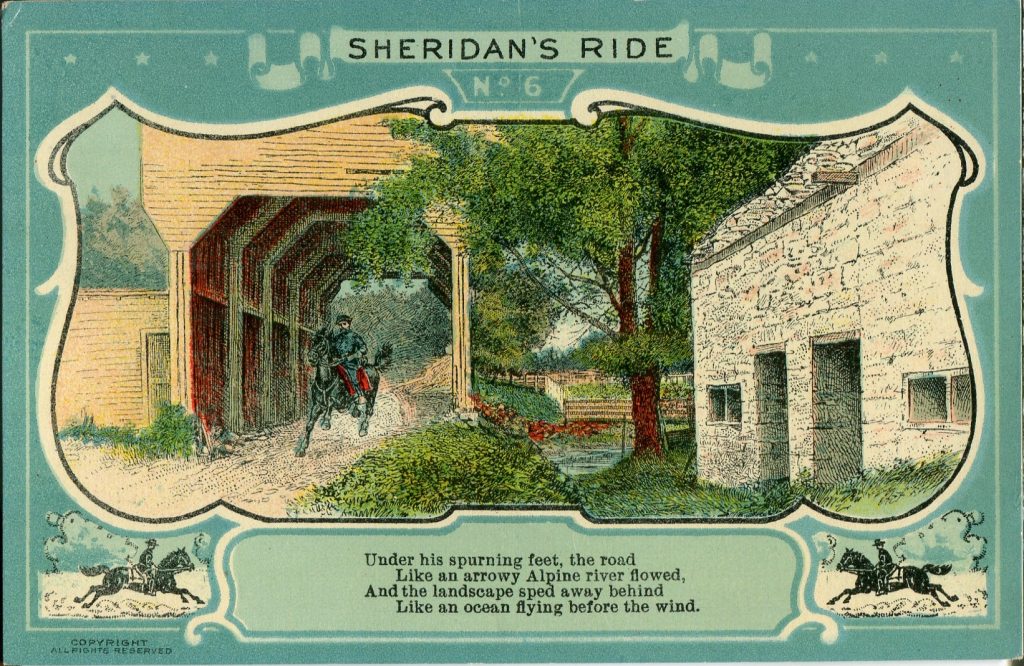 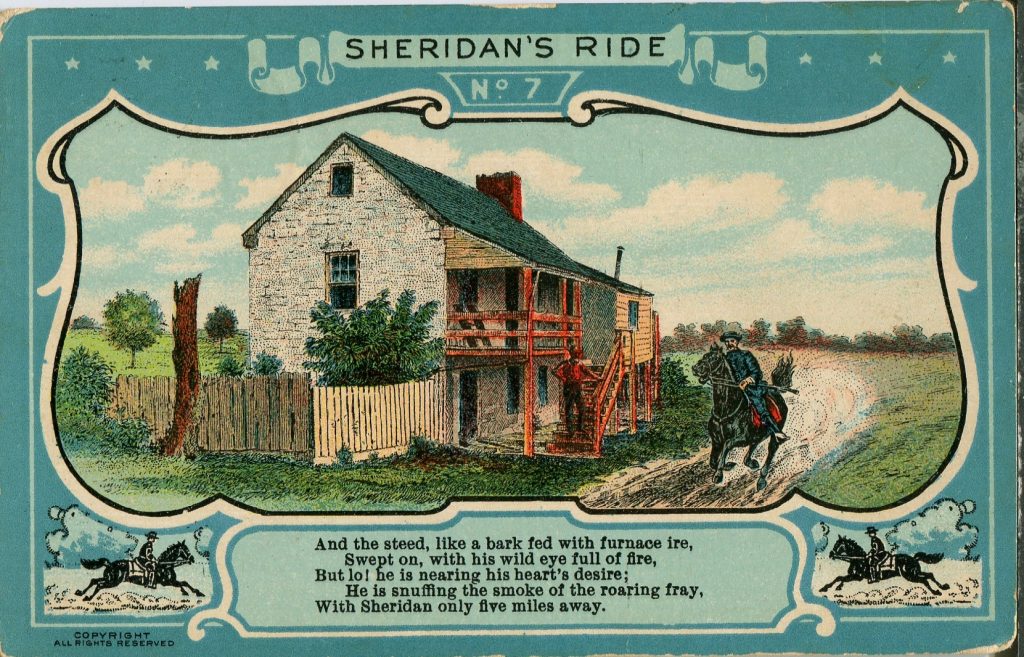 Under his spurning feet, the road
Like an arrowy Alpine river flowed,
And the landscape sped away behind
Like an ocean flying before the wind;
And the steed, like a barque fed with furnace ire,
Swept on, with his wild eye full of fire;
But, lo! he is nearing his heart’s desire;
He is snuffing the smoke of the roaring fray,
With Sheridan only five miles away.

The first that the general saw were the groups
Of stragglers, and then the retreating troops;
What was to be done? what to do?–a glance told him both.
Then striking his spurs with a terrible oath,
He dashed down the line, ‘mid a storm of huzzas,
And the wave of retreat checked its course there, because

The sight of the master compelled it to pause.
With foam and with dust the black charger was gray;
By the flash of his eye, and his red nostril’s play,
He seemed to the whole great army to say:
“I have brought you Sheridan all the way
From Winchester down to save the day.”

Hurrah! hurrah for Sheridan!
Hurrah! hurrah for horse and man!
And when their statues are placed on high
Under the dome of the Union sky,
The American soldier’s Temple of Fame,
There, with the glorious general’s name,
Be it said, in letters both bold and bright:
“Here is the steed that saved the day
By carrying Sheridan into the fight,
From Winchester–twenty miles away!”

What we know about this set of postcards devoted to Sheridan’s Ride is very little. The illustrations are unsigned, there is no publisher’s name nor logo. The backs are divided, the “Postcard Apparatus” is fancy, yet standard.

If any reader has further knowledge of the publisher, illustrator, or date, please share what you know in the comments section below.

The Staff of Postcard History offers this article for your enjoyment. It is a combined effort of many: our publisher, editor, webmaster and collectors/contributors far and wide. Please use the COMMENTS feature below to let us know how we're doing.
PrevPreviousOpening Lines
NextThe Centennial of the United States Aircraft CarrierNext
9 Comments
Oldest
Newest Most Voted
Inline Feedbacks
View all comments
Dr. Stephen H Grant

Well Done! Thank you and here are hopes more information will be forthcoming.

I noticed that the verse on the cards did not always track neatly with the order of lines in the actual poem.

You are doing an excellent job and it is most appreciated.

Thanks for sharing this. I have never read the poem or have had the opportunity to see the postcards! Postcard History is above all else a learning experience!

I have a card from this set which I purchased for a couple of dollars on eBay. The sender, having posted it on 1939, referred to it as an “antique” even then. 🙂 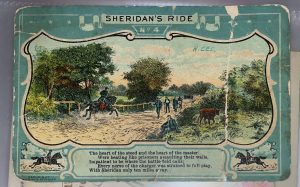 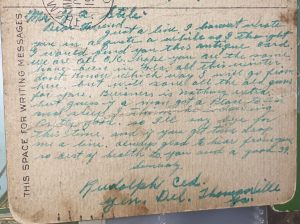 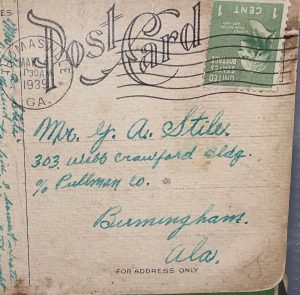 a cousin of mine gave me 5 of the 10 postcards as a gift, and I just purchased the 5 I was missing to complete the set. thanks for the background!