For the American Baby-Boomer, the word, “imagine” was quite successfully hijacked by a young British lad named John Lennon. He wrote a song in 1971 that asked the listener to imagine a world of peace, without materialism, without borders separating nations, and without religion. It became the best-selling single of his solo career, and later became the title-song of a very profitable long-play album.

Before Imagine was a song it was a mind-altering process. Inventors imagine things, then build them. Artists imagine scenes, then draw them. Architects imagine skyscrapers, and contractors built them. Composers imagine symphonies and orchestras performed them.

Imagine this. You’re on a driving holiday in Italy. It is spring and new flowers bloom along the roadside. The sun is bright and warm. There is pollen in the air, but you have certainly imagined that the sweet aroma of mountain laurel does not bother you. Keep it going. You come to a mountain village where you search for a lunch of bread, cheese, a bit of meat, and – go ahead stretch the point – a glass of wine.

One more, please. Imagine you have made a purchase at that village grocery and you have gone to a park along the shore of a lake. The sign at the gate announces your arrival on the shores of Lake Reschen in South Tyrol, Italy.

You pick a space to stop along the lake shore road. At the water’s edge is a picnic table. You cover it with a blanket. You open the wine and unwrap the meat and cheese. Then for the first time you look out over the lake and see something that in your wildest dreams you could not have imagined – even if you tried.

The unimaginable is a church tower partially submerged in a lake.

Graun im Vinschgau, likely the northern-most city in Italy is an almost new city; it has only existed since 1950.

The image you see on the postcard is proof that universal corporate greed has existed for a very long time. It all started in 1939. But wait, Graun started quite some time before the 20th century. The first settlers in the area arrived decades before 15 BC, but it was then that this village of Celts found themselves in the wake of the ever-expanding Roman Empire. They apparently lived in peace until the mid-twentieth century.

The 1930s is when the whole world became susceptible to the “electric craze.” It seemed that every place there was a river, some financial tycoon with a team of electrical engineers stood on the banks trying to survey a place to build a dam that could create electric power. As in this case and many other, people would be displaced, property destroyed, and landscapes altered – some very dramatically.

In 1939 there were nearly two hundred families living in Graun im Vinschgau. The villagers survived through farming and trade with neighboring villages on both sides of the Swiss-Italian border. [The early chrome postcard below, portrays the city circa 1948.]

When the plan was announced that an electric consortium wanted to flood the village, the result was exactly what was expected – alarm, shock, disgust, resolution, compliance, and festering and unforgotten hate.

In the “resolution” phase of the process (circa 1946 to 1948) it was decided to “move” the village. New homes were built. A shopping plaza that included a grocery, a car dealership, and hardware was built. And, the parishioners of St. Anne’s erected a new church.

When the “move” finished and every villager was safely ensconced in a new home there was still much to be done. History does not tell us if there was an organizational plan or if it was a spontaneous event, but most villagers in a desperate attempt to keep what was theirs and afford no comfort to the “outsiders,” ransacked the old village, destroyed everything that could not be moved and demolished nearly every structure except the campanile – it just seemed sacrilegious or disrespectful to do so.

There are only two problems. One is unavoidable and unimagined; in the 1950s everyone thought the water level would be much higher. Never in the chaos of the time was it dreamt that the bell tower would not be covered by water and that it would remain a constant reminder of what was and what would never be again. It is still a sore-spot and constant reminder.

The second problem is that the whole village was built near the same time, using similar construction materials – the whole village looks the same. Graun is not like the ticky-tacky of the American Levittowns, but each house has an eerie sameness. Generally, Graun has no historical charm, no social personality, nothing unique for which the village can be proud – except their 14th century church tower that rises from the bottom of a lake.

Nevertheless, that same church tower, for unimagined reasons brings tourists by the bus loads. They take pictures, they spend money, and they go home to tell the story of the little Italian village, whose ancestors are all Celtic. Yes, ancient Celts indeed, who despite their public outcries in the 1940s and ‘50s still suffered the indignation of total intrusion by men who thought profit was more important than people.

The true irony of all this is that Graun, the little village in South Tyrol where on many days of the week the tourists outnumber the citizens, takes no power from the dam that flooded their village all those years ago. The electric used by the current residents comes from Switzerland. 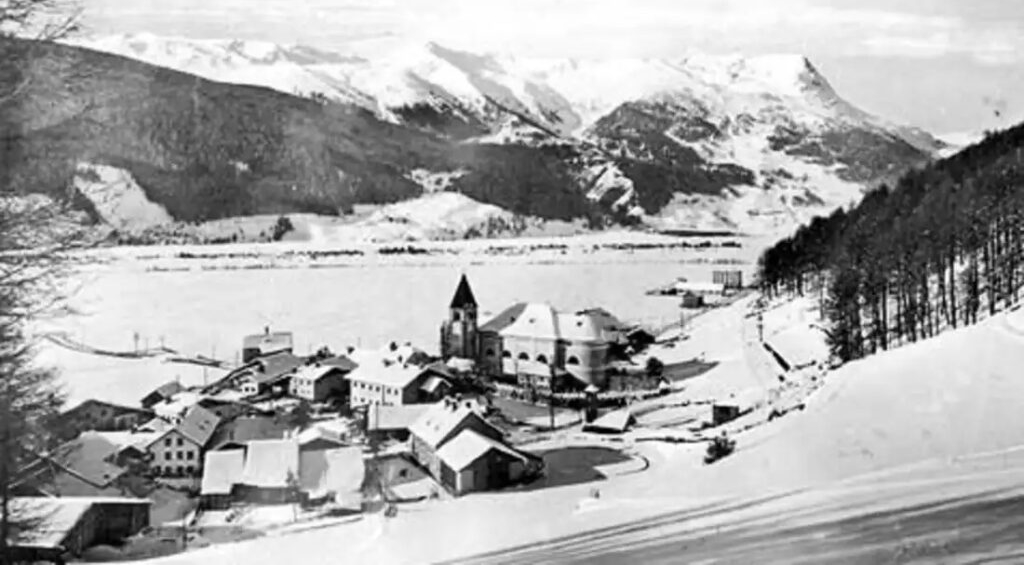 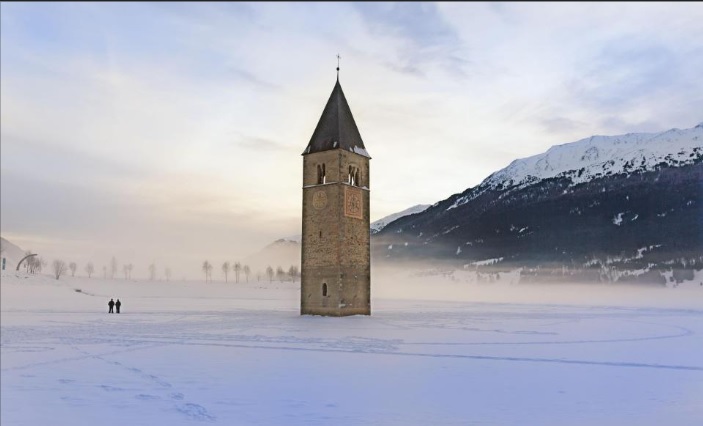 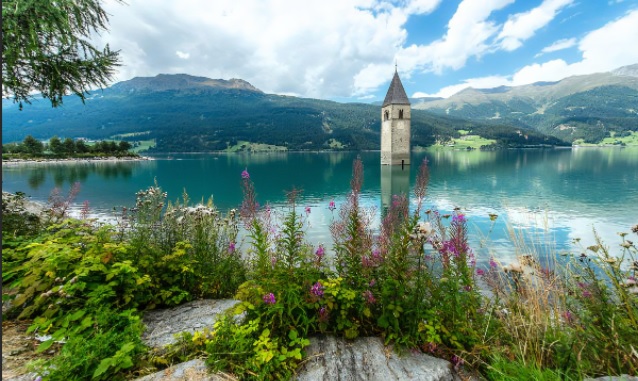 A modern continental card, circa 2002

Thank you for the story.. There is a very good book about this village: I’m Staying Hereby Marco Balzano (written in Italian originally). It tells the story of around the time of the village and during the war.

This was so interesting. Thank you so much!

Perhaps Venice will one day suffer a fate similar to that which befell Graun im Vinschgau, and only one or two structures will still be visible amid the water.