Is Life Worth Living?

One special part of my collection is the one of hand drawn postcards. To me a hand-drawn card is original art – a one-and-only. Such cards are few and far between, but that is exactly what this one is.

It is a postcard on which someone has drawn the image of a family of five inspecting a wall mounted poster. The sign advises of a Preferential Tariff or tax that was to apply to the staple foods like bread, beef, butter, beer, and eggs although the artist continued the list to include tobacco, bachelors, old maids, motors, and the weather. In essence the poster is a clear implication that everything was being taxed. The situation begs the question that is the card’s title, “Is Life Worth Living?”

The humor in the image is quite likeable and it is well drawn. I splashed out £2 and added it to my collection.

The reverse of the card suggests that it was drawn in 1975 and that it is a near copy of a postcard from 1904. The message reads:

1975. Just a rough (VERY) copy of a card I found on the shelf I found. Have not yet cleared it. I was thinking Are things so much different to-day? was looking at the Taxes. It was sent to Dad about some work and Grandma has addressed it and written a little note on it. It was sent when we lived at Colenso Road Clapton Park May (19)04 Post mark (half penny stamp)”

The wording, punctuation, capitalization, and brackets are all as written and not added or altered by me. I suspect that the artist had been clearing out the effects of a deceased relative when he came across a very similar commercially produced card which was mailed in 1904.

I have looked for a copy of the original card for some months with no success. If you have one of the originals, I would be interested in viewing it. [With only a bit of imagination a casual collector may appreciate the artwork as the pen and brush of England’s Thomas (Tom) Browne.]

I understand the term “Preferential Tariff” although, curiosity prompted a search on what relevance it had in 1904. An article (that is abbreviated) follows:

. . . after 1903, when Joseph Chamberlain began his famous crusade for Imperial Preference. Chamberlain wanted to use trade policy to promote the political integration of the Empire: he argued that the UK ought to have lower tariffs on imperial than on foreign goods. Since British tariffs were for the most part zero, it would be necessary . . . to build a tariff wall around England for the single purpose of knocking holes in it, through which Imperial goods might pass. But this meant imposing tariffs on imports of foreign wheat and meat, thus increasing food prices and lowering workers’ real wages.

The policy was unpopular with the public and brought about a change of government in 1906. This knowledge puts in context the 1904 reference to the basic foodstuffs, and the sarcastic suggestion that the pleasures of life (old maids?) were also to suffer taxation.

But why ask the same question in 1975? Here’s why! At an age still in the teens and starting a career any lad would be thinking of other things (girls, alcohol, football and how poorly paid he was) and never gave economics a thought beyond how expensive a pint was. For these reasons I again had to return to the Internet.

In the 1970s the UK was in recession. The country’s GDP had declined by 3.9% and it took fourteen quarters to recover between 1973 and 1975. This was the era of the oil crisis, a miners’ strike, and the state of emergency three-day week which was imposed on the commercial users of electricity – a restriction whereby the power could not be used for three consecutive days. Electricity blackouts across the country were widespread. There was also double-digit inflation, which peaked at more than 20%.

Economic growth was re-established in 1975 as the recession ended, but Britain’s economy remained shaky. The basic tax rate to which the artist refers was 33% up to £4,500 with incremental increases up to 83%. That said the 1974 average was near £1,900 per annum.

So the person who found his Dad’s card in 1975 drew parallels with the economics of 1904. With the negativity brought about by COVID-19, there may well be people yet again asking this question. The answer, as it should be is, “Yes.” Life is precious. Live it to the full. This moment in time will end and you will be here to see it. Stay inside and stay safe . . . although if you are out and about and see this card, please let me know.

UPDATE 2022: After two years of searching, I found it!

The article above was written in the summer of 2020. I mention near the end that I was keen to buy the published postcard from which the image was copied. Although in truth – with the passage of 116 years – I thought I was being a bit optimistic. I am however delighted to announce that I have obtained a copy of the card. The original was published under the Premier series title and has a small trademark with the letters L & G in a shield. It was mailed in February 1906. It cost me a wee bit more than I had hoped to pay but I just had to have it. I am so pleased to have both cards in my collection.

Compare the cards below. 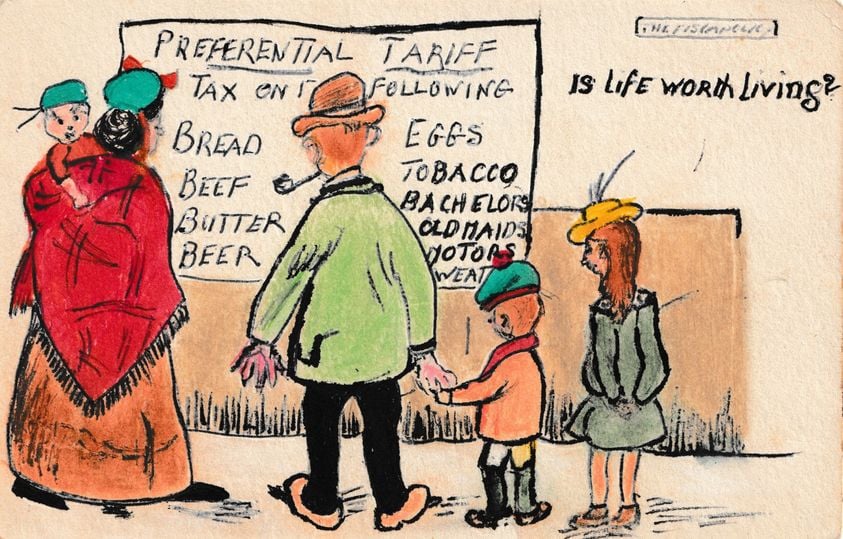 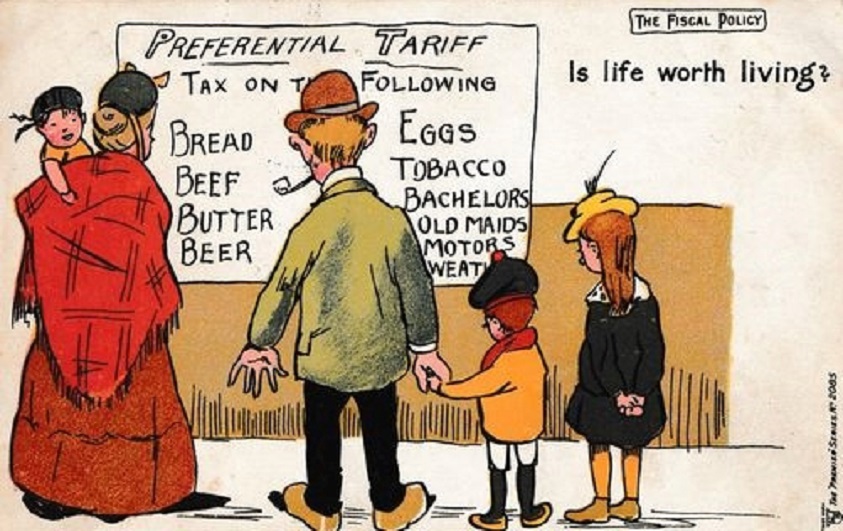 Bob Teevan is an eclectic collector of vintage postcards. He enjoys digging into the people and places related to his cards and thinks of a postcard as a window into history. He has recently begun a Facebook group, “People and Places behind Vintage Picture Postcards” that has informal and fun discussions in respect of the people and places behind postcards. He is also keen to keep the fun in the collecting hobby. He lives in Scotland.
PrevPreviousThe USS Constellation as seen on Tichnor’s linen postcards
NextImagine!Next
7 Comments
Oldest
Newest Most Voted
Inline Feedbacks
View all comments
Eric Blomquist

Nicely done (both the copy and the hunting down of the original)! Good luck to the collector in the 2070s trying to hunt down my rendition of a card from the 1950s.

Great article Bob. Thanks for sharing!

Thank you. A lot of the fun of collecting is the sharing of ‘stories,’ so you are very welcome.

I’m glad you found the original after discovering the reproduction, Bob. The 1975 copy may be rough, but it’s a lot better-drawn than anything I could have produced!

I was genuinely very surprised when I found the original card. For me in made an interest ‘set’ of cards. I find it amusing to see the high level of copying when drawing (for example the pattern on the red shawl) although the complete change of colours (black hats now turquoise) and as the 1975 artist did have the colour black in his paint box he must have thought he could improve upon the original.:-)

I prefer the original baby’s face and man’s hair, woman’s skirt, little girl’s realistic stance and also the wall poster. I think the fringe on the woman’s shawl was an improvement on the copy. All in all the article seemed to be a great analysis of political and financial history .I hope to get to his Facebook group