as seen on Tichnor’s linen postcards

The United States Secretary of the Navy chooses and announces the name of each new vessel in consultation with the President under the rules of Congress. Throughout the years those who have taken this awesome responsibility must have liked the name Constellation – they have used it four times.

The first such vessel was a 38-gun frigate launched in 1797, only twenty-two years after the U.S. Navy was founded in Philadelphia, Pennsylvania, on October 13, 1775. That ship served the navy until it was scrapped in 1853.

The next Constellation was a sloop-of-war. It was the second ship of that name that has enjoyed the most glorious reputation. It was the last sails-only ship designed and built by the navy at the Gosport Shipyard (the founder’s name for the Norfolk Navy Yard) between 1853 and 1855.

The sloop-of-war Constellation spent most of the Civil War years in the Mediterranean as part of an operation known as the African Slave Trade Patrol. The patrol was a blockade of African and other ships ladened with slaves bound for North America. The patrol functioned from 1819 to 1861 – the Constellation joined the other warships and cutters in 1855 and remained on duty until 1859. In the duration of the patrol – 42 years in all – more than 100 suspected slave ships were destroyed, seized, or captured.

In its day the complement of the ship was 21 officers and about 260 sailors. It carried 203 mm chambered shell guns, four long guns, a Parrott rifle, and several 12-pound bronze boat howitzers.

From the date the USS Constellation entered service in 1855 she was commissioned and decommissioned at least three times.

One such occasion came in 1879 when she was modified to carry a cargo of food and supplies to aide in the relief of the Irish. Another recommissioning came in 1892 when she was sent to Gibraltar to assemble and transport artwork from around the world destined for the World’s Columbian Exposition in Chicago.

Constellation is now a museum ship anchored in Baltimore (Maryland) Harbor but for nearly twenty years, starting in 1894 she was anchored in Newport, Rhode Island as a training ship at the Newport Naval Training Station. In 1914, then under-secretary of the Navy, Franklin D. Roosevelt ordered that Constellation be refurbished for celebratory occasions. In the course of time Constellation became a prime attraction at the likes of the 100th anniversary of the Star Spangled Banner in Baltimore and the 150th anniversary of the Declaration of Independence in Philadelphia in 1926. When duty in Philadelphia was completed, she was dry-docked at the Philadelphia Navy Yard for additional maintenance then towed back to Newport.

The World War II years left Constellation as the reserve flagship for Admiral Ernest J. King, the commander of the Atlantic Fleet. Finally, she was decommissioned on February 4, 1955, and towed to Baltimore.

During those years when Constellation was anchored in Newport the Tichnor Postcard Company produced more than a dozen postcards of the Naval Training Center. Constellation figured prominently in Tichnor’s products. 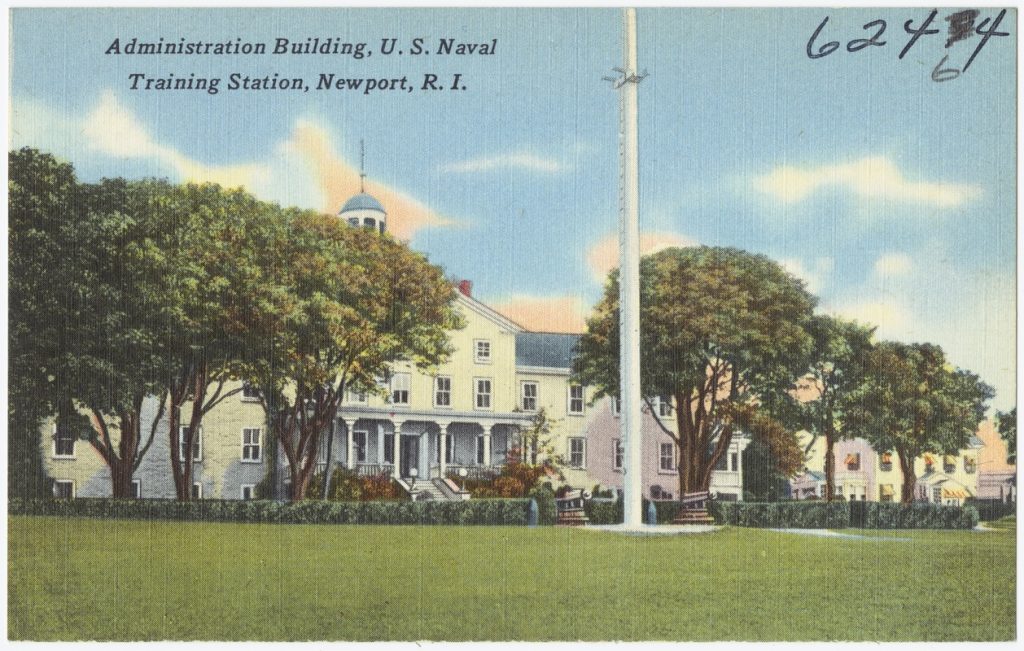 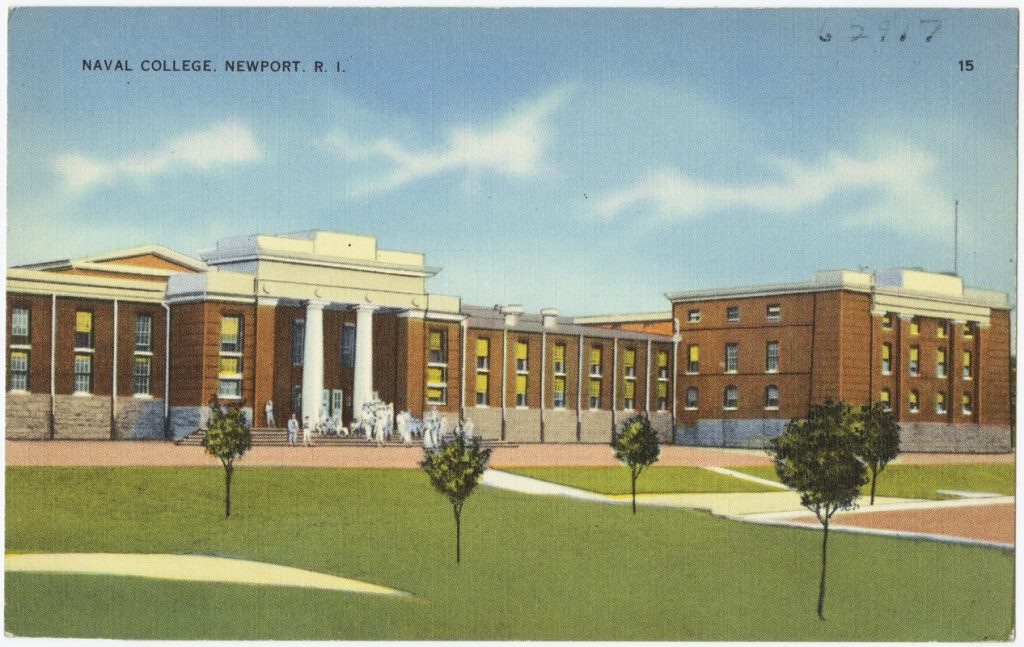 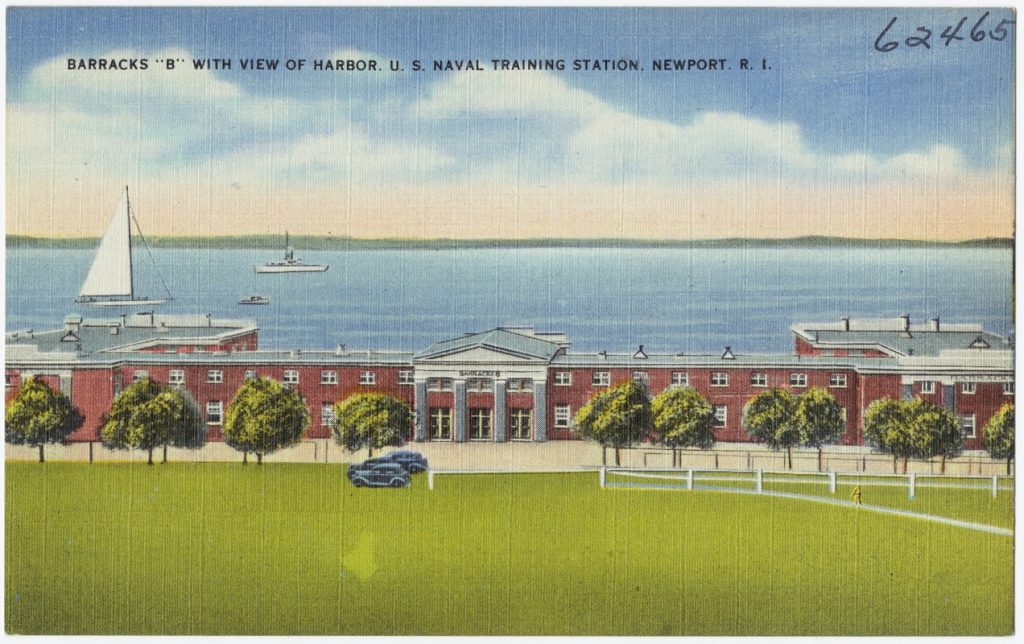 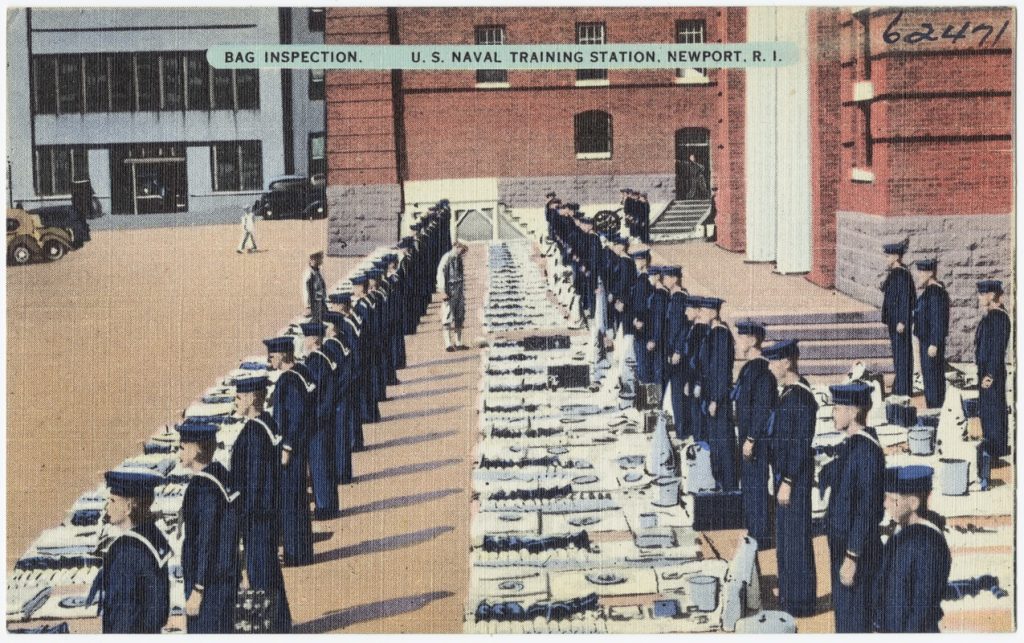 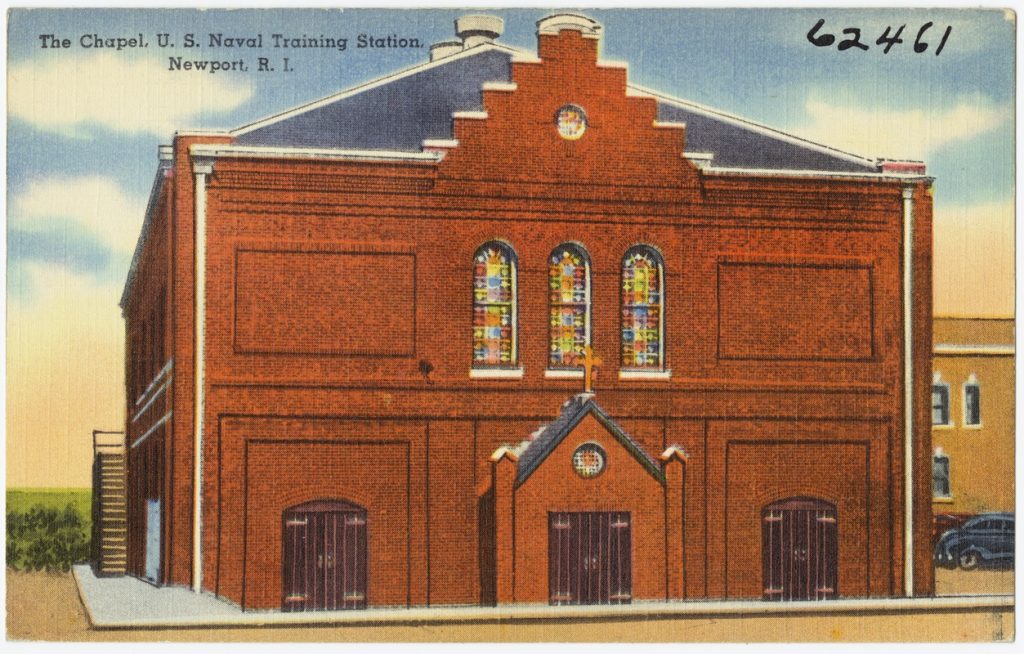 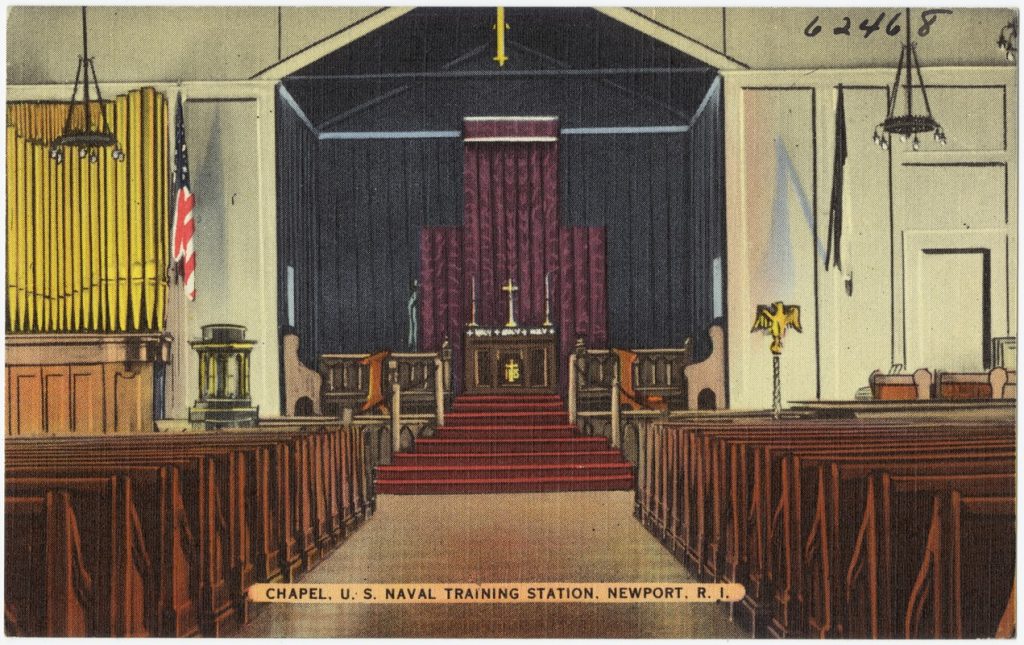 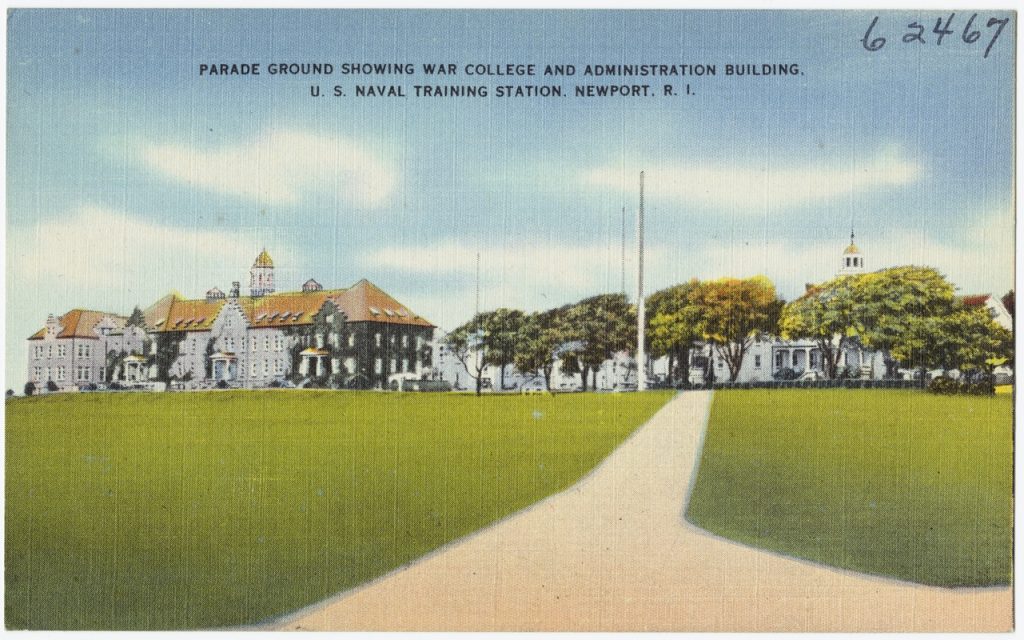 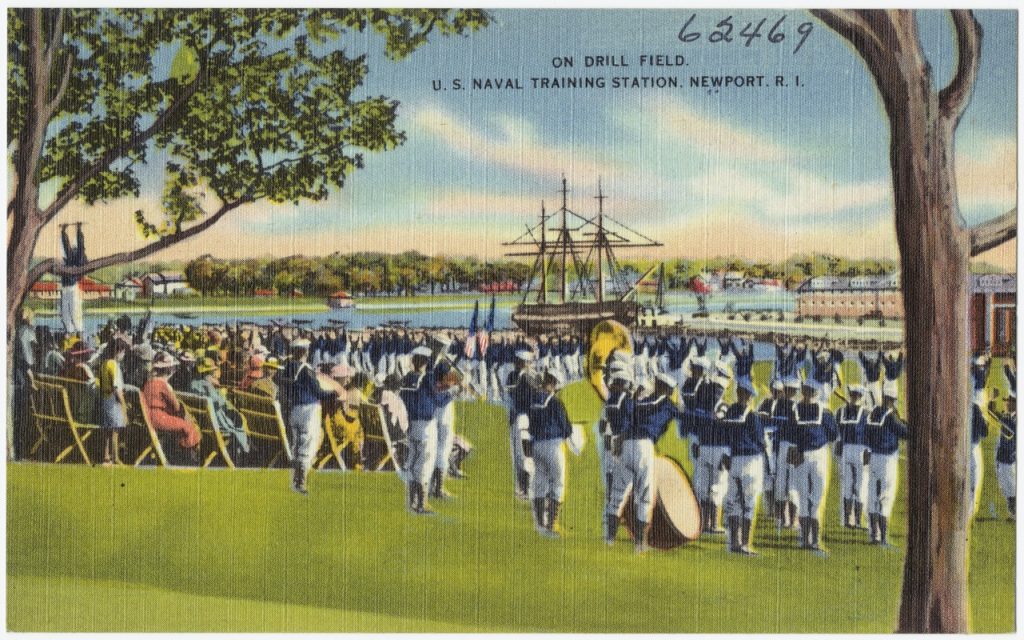 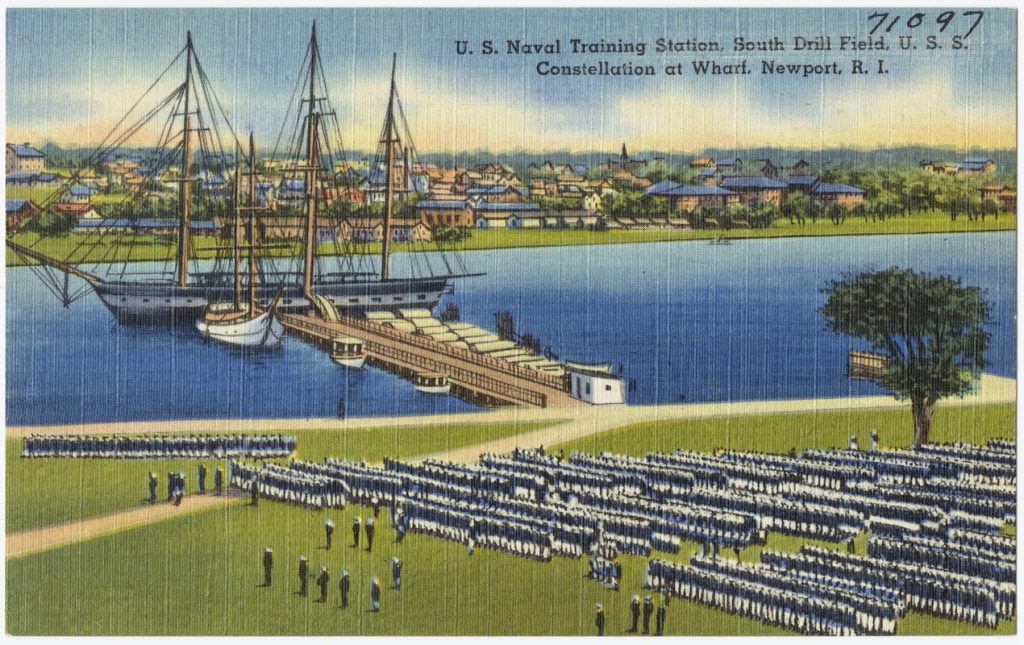 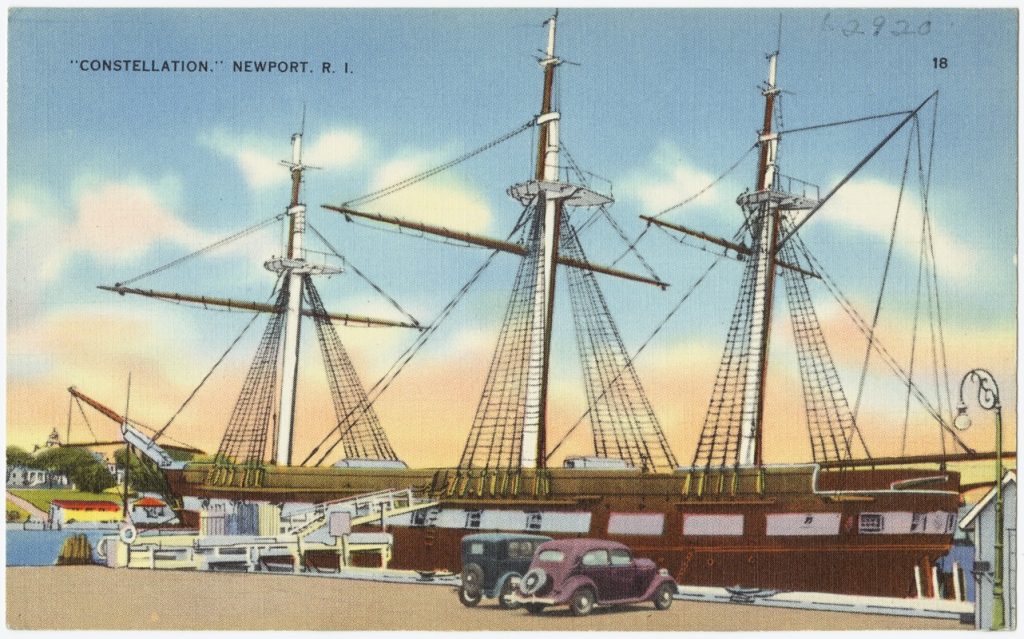 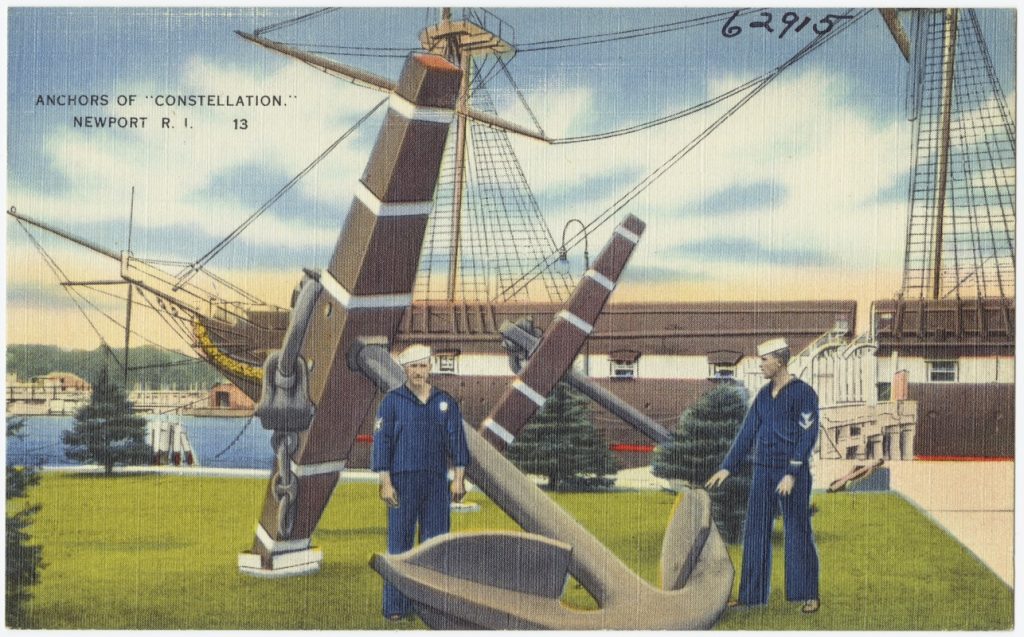 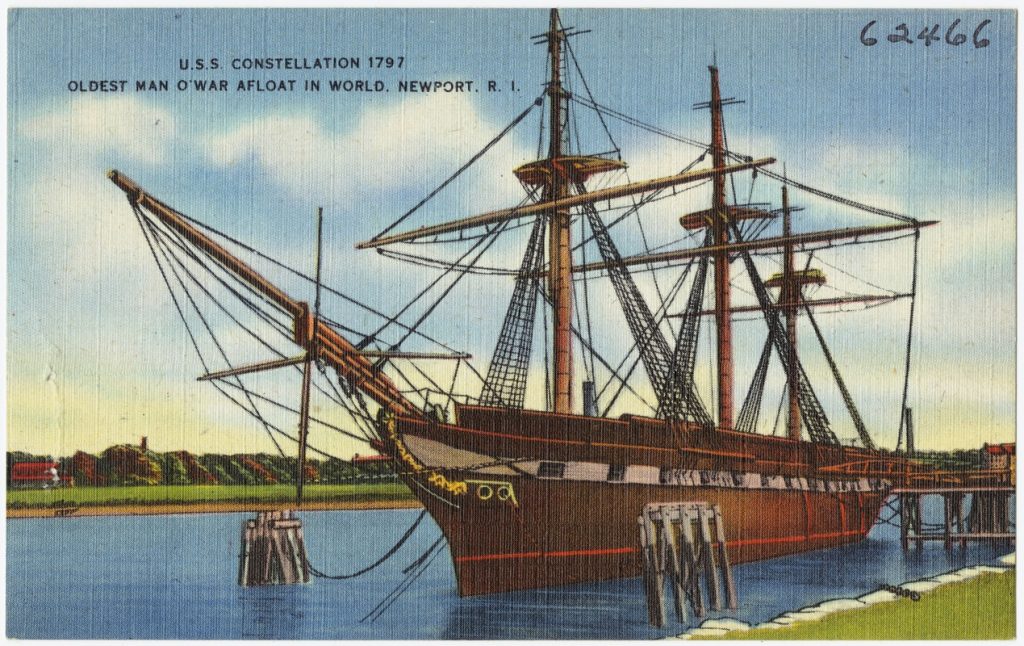 For the Postcard History Online Magazine readers who have not yet discovered the Tichnor Postcard Archive that is available on the Internet, you may want to Google “Tichnor Postcards” to learn about the 25,000 office proofs that are available for your inspection.

As an example, many of the cards used to illustrate this article are Tichnor office proofs of the Naval Training College in Rhode Island. Using the Tichnor archive you can easily assertain that there were 227 linen era postcards manufactured by Tichnor with Rhode Island themes.

The Tichnor Postcard Archive site, available courtesy of the Boston Public Library, is a wonderful resource for all post card collectors. It was very commendable of the Tichnor Bros. to have had the foresight to leave this great archive to the BPL in the 1970s. I was at the BPL several years ago and had the opportunity to view this collection first hand. Interestingly, the post cards were filed by CITY first, rather than state. The cards were not in sleeves, and I was able to make photocopies of several cards I was interested in. Now all of this, it… Read more »

Have had problems with NPCW this year due to fact that I was listed as Louise Harris in Stint’s list. I had put that on name on Facebook to try to get some ads cut off. That only made more spam come. Also other life issues have slowed me down a lot. Please share this around NPCW if possible. I feel very bad that I was so late and missed sending to many long-time participants

The cars parked near the Constellation on one of the cards are now about as old as the ship was when the card was printed!

I’ll keep your expertise in cars in mind next time I sort cards to downsize. Do you need any particular tuff ?

Thanks Mr,Van Staden for your interesting article and particularl ti about Tichnor Archive. I am trying to downsize my collection and this is helpful.Also like the way you laid out images.