The “Railway in the Clouds”

Thaddeus Sobieski Constantine Lowe was an American Civil War aeronaut, scientist, and inventor, mostly self-educated in the fields of chemistry, meteorology, and aeronautics, and the father of military aerial reconnaissance in the United States as well as the father of ten children. Certainly, no one could ever accuse Mr. Lowe of being an “under-achiever.”

Thaddeus Lowe was born on August 20, 1832, in Jefferson Mills, Coos County, New Hampshire. Lowe’s grandfather, Levi Lowe, fought in the Revolutionary War, and his father was a drummer boy in the War of 1812. Both parents, Clovis and Alpha Lowe were native New Hampshirites and descendants of 17th

The young Thaddeus’ first love was for aeronautics and the use of lighter-than-air gasses. He studied for years and by the late 1850s, he was well known for his advanced theories in the meteorological sciences as well as his balloon building. In July 1861 Lowe was appointed Chief Aeronaut of the Union Army Balloon Corps by President Abraham Lincoln. After his service, Lowe returned to the private sector and continued his scientific exploration of hydrogen gas.  He invented the water gas process by which hydrogen gas could be produced from steam and coke. His inventions and patents on this process and ice-making machines made him a millionaire. This acquired wealth will be what takes him to Pasadena California to “retire.” In 1890, Lowe and his family moved to Pasadena where he built a 24,000 square foot mansion. He also started a water-gas company, founded the Citizens Bank of Los Angeles, established several ice-making plants, and bought a Pasadena opera house.

The founders of the city of Pasadena had always had a dream of a scenic mountain railroad that took one to the crest of the San Gabriel Mountains overlooking their city as well as neighboring Altadena. It was one David J. Macpherson, a civil engineer graduate of Cornell University, who had the general plans for just such a railroad. He was introduced to Lowe with the idea of joining Macpherson’s plans and Lowe’s money together in one venture. Macpherson’s designs of trestles and bridges went beyond the engineering standards of the day, particularly the Macpherson Trestle, which was designed to negotiate a deep granite chasm along 500 feet of track on a 62% grade. Macpherson wandered extensively about the foothills working on ideas about the development of a scenic mountain railroad to the crest of the San Gabriel Mountains. It wasn’t until he was introduced to the millionaire Lowe that any idea of funding such a venture came to the fore.

Together in 1891, Lowe and Macpherson incorporated the Pasadena & Mount Wilson Railroad and made plans for a steam cogwheel train to the summit of Mt. Wilson, the likes of which would rival the ones at Mt. Washington and Pikes Peak. The plan for the Mount Lowe Railway was also changed to incorporate an electric streetcar or trolley and a cable car funicular. They directed their railway toward Oak Mountain via the Echo promontory. Oak Mountain was later renamed Mount Lowe, and to make it official, Andrew McNally, the co-founder of the map printing company Rand McNally who had moved to Altadena, had the name Mt. Lowe printed on all his maps.

Lowe opened the first section of the railway on July 4, 1893. It ran to the Rubio Pavilion in the Rubio Canyon, then transferred to a steep 2,800-foot-long funicular to Echo Mountain.

The line was divided into three divisions: the Mountain Division, the Great Incline, and the Alpine Division. The mode of locomotion was electric traction railway (the difference between this and any other scenic mountain railway of its kind was that it was an all-electric traction trolley, the only one of its kind to ever exist), and a cable-driven incline funicular. Electrical power for the railway consisted of several generating stations equipped with either gas engines or Pelton wheels, depending on the availability of mountain water.

The Mountain Division, originally built as a 3-foot 6-inch narrow-gauge line, began with a trolley that ascended Lake Avenue, along a private right-of-way through the Poppy fields district, and proceeded into Rubio Canyon to the foot of Echo Mountain.  At Rubio, there was a large platform that spanned the canyon with a 12-room hotel, the Rubio Pavilion. There were a series of stairways and bridges that ascended the canyon for viewing some eleven waterfalls. 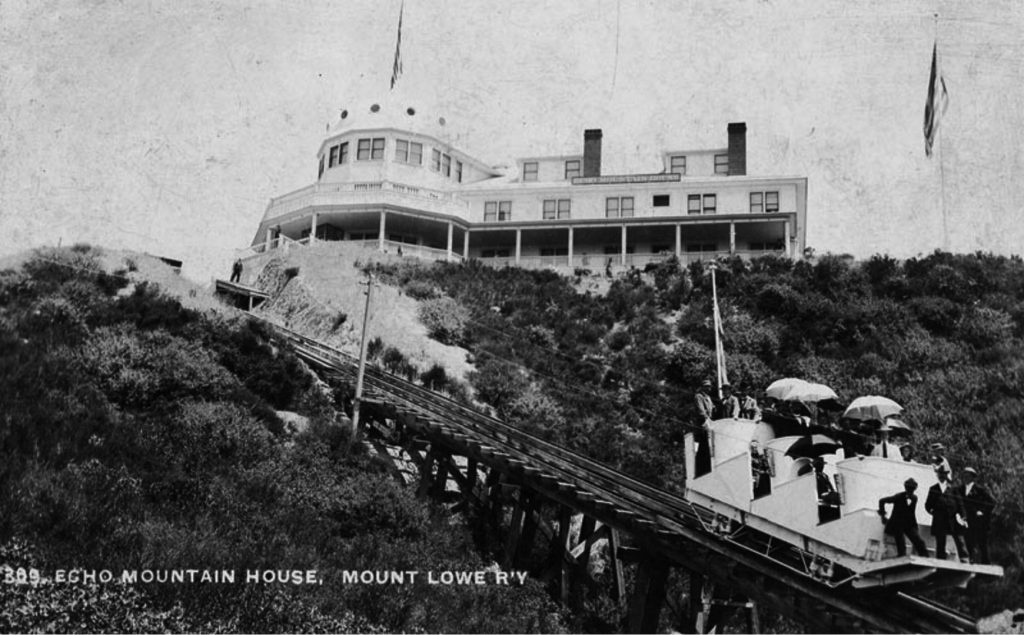 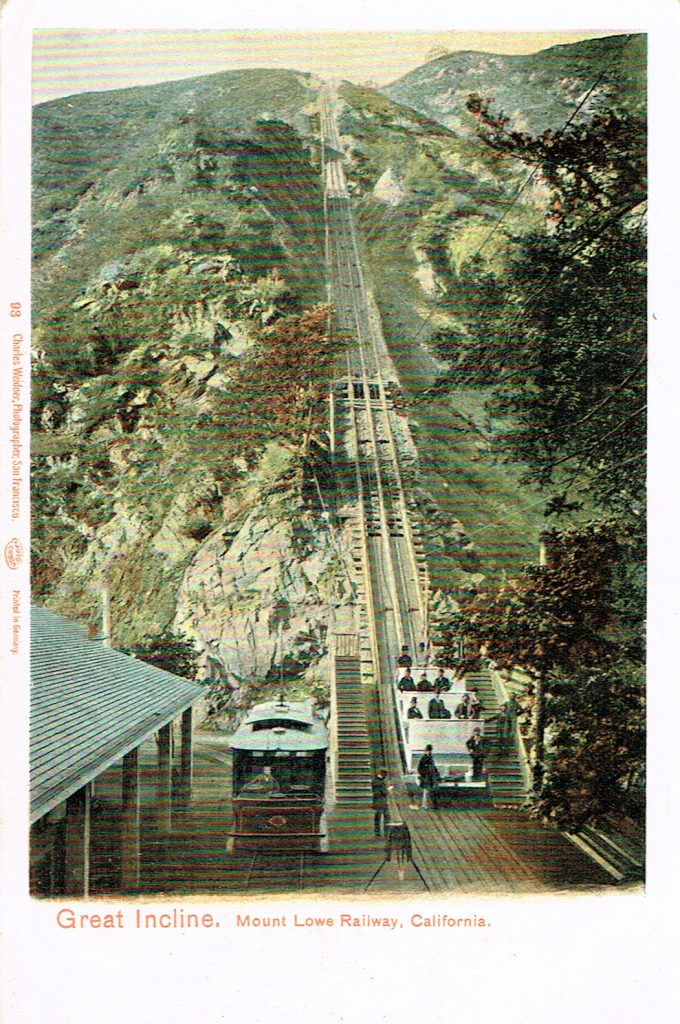 From this platform, eight passengers could transfer to the narrow gauge, three-railed inclined plane railway, the “Great Incline,” and ascend Echo Mountain (elevation 3,250 feet). The incline powering mechanism was designed by San Francisco cable car inventor Andrew Smith Hallidie. It boasted grades as steep as 62% and as slight as 48% and gained 1,900 feet in elevation. The Great Incline was the first of its kind built with three rails and featuring a four-railed passing track at the halfway point. A particular feature on the Incline was the Macpherson Trestle named by Lowe for his engineer, David J. Macpherson. It was known for its exceptional design in crossing a granite chasm over 150 feet deep to reach the top. The top of Echo Mountain became a little city of its own with places to eat, order picnic lunches, shop at stores, dormitories for employees, and a power generating station to supply the Echo Mountain facilities. There were also observation decks at various spots, trails that could be taken by hikers both up and down the mountain and into the Alpine regions, tennis courts, stables, and a  zoo. All of the buildings were painted white and because of the view from far below, they became known as “The White City in the sky.” Behind Echo, Mountain ridge was an observatory building with a working 16-inch telescope housed in a round domed building. At the top, there was a 40-room chalet. In 1894 an 80-room hotel, the Echo Mountain House was added.

On September 9, 1894, a massive 60-inch General Electric searchlight (first used at the 1893 Chicago World’s Fair) and the largest in the world, was set ablaze for the first time. Its carbon arc lamp burned with the intensity of 90,000 to 100,000 candles. A massive reflecting lens mirror, built-in France, magnified that blaze to 375 million candlepower. 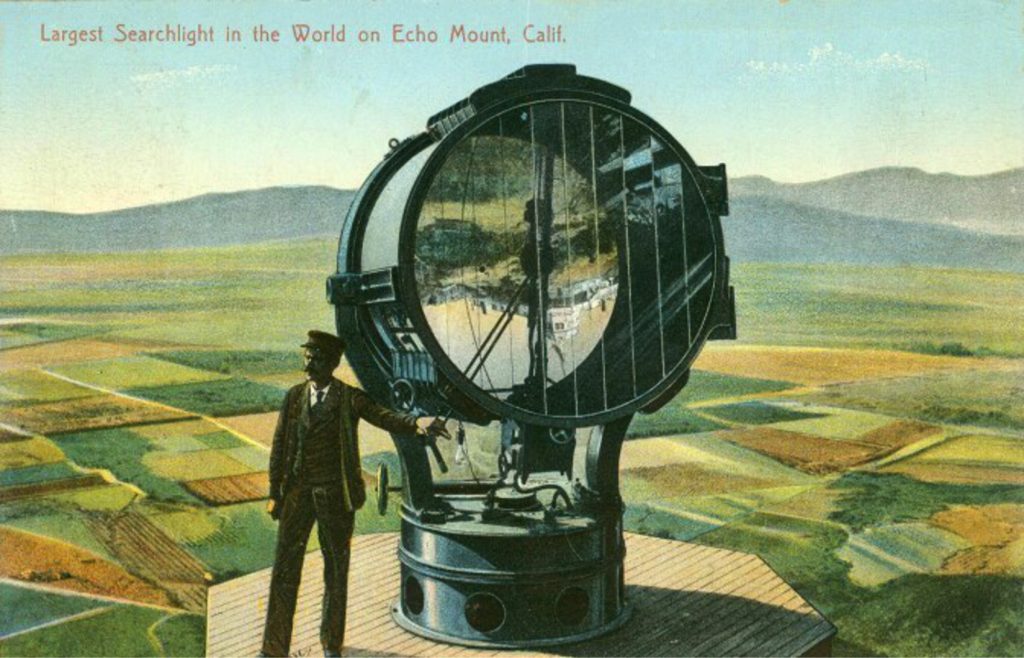 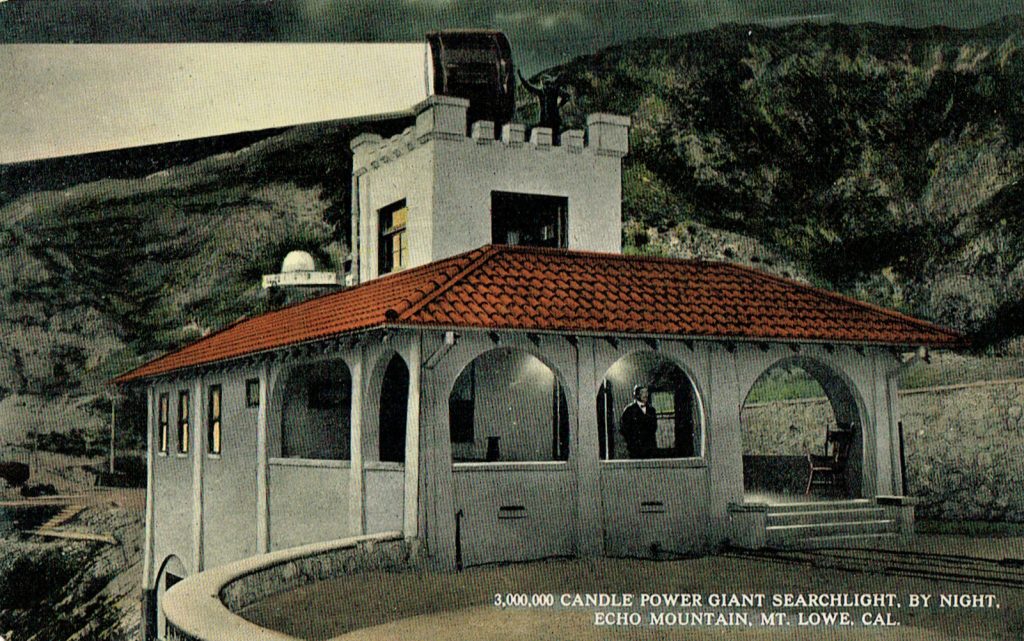 The third division, the Alpine Division, opened in 1896 and consisted of 3.5 miles of 3-foot 6-inch narrow gauge track with 127 curves and 18 bridges and trestles. On this line, there were three cars available for shuttling between Echo and the end-of-line, though only one car ever operated at a time due to electrical limitations, and there was no two-way traffic. 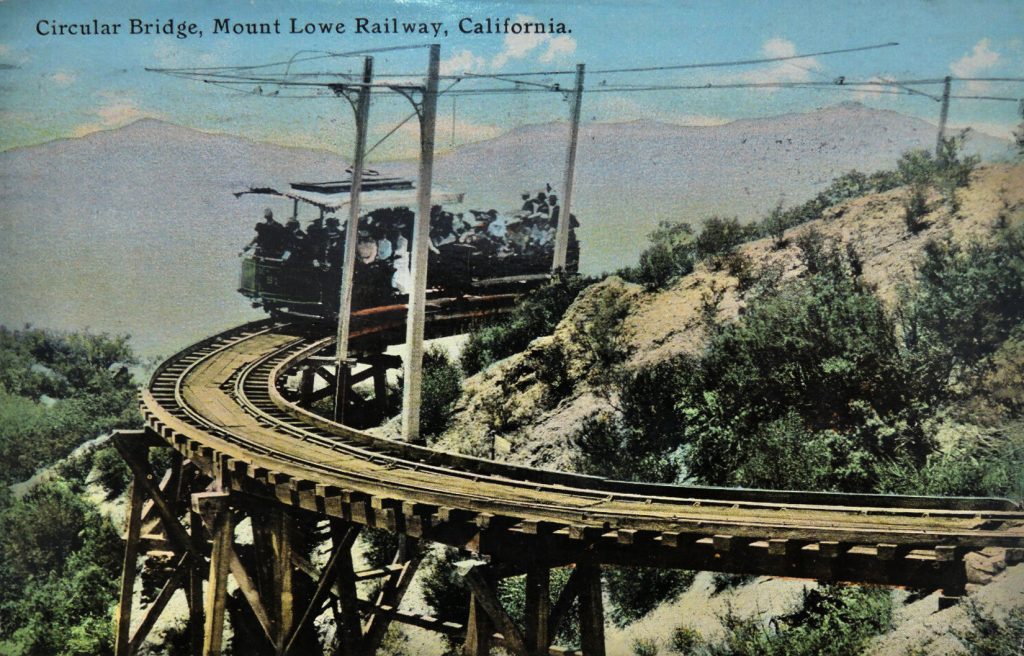 This location was called Crystal Springs (elevation. 4,995 ft) for a stream of water that poured from the hillside, and it was here that the last of the hotels, the 12-room Swiss-style chalet, “Ye Alpine Tavern,” was built. Altogether there were some seven miles of track. 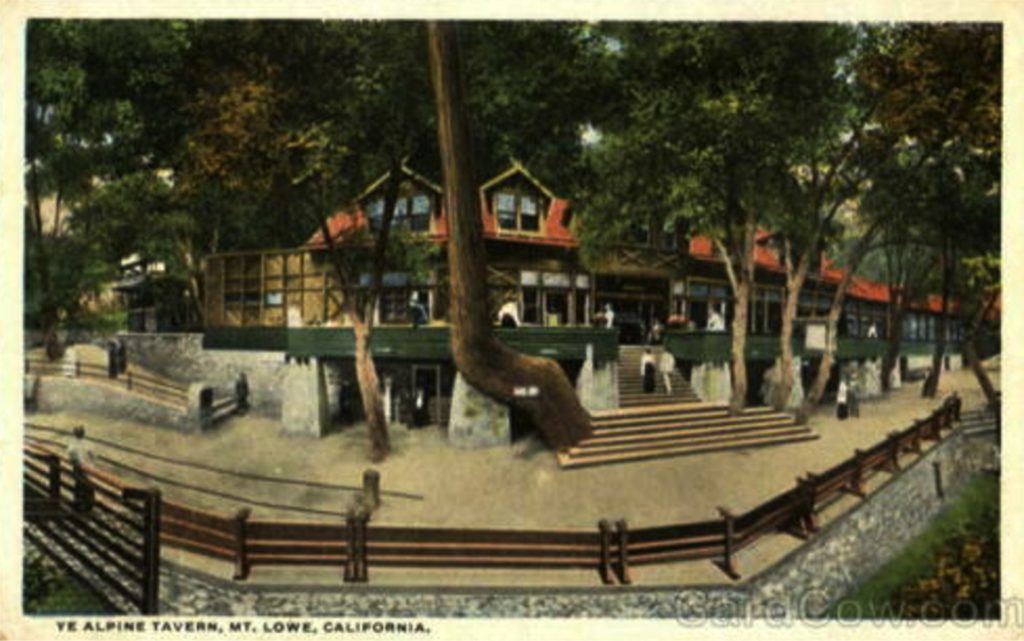 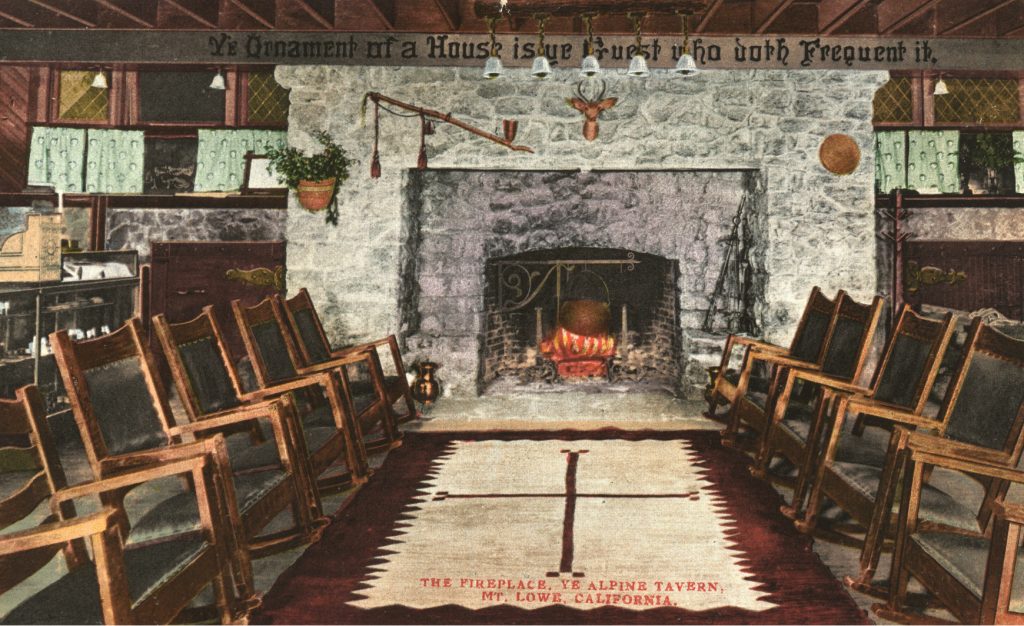 The railway fell in stages to the Echo Mountain House fire, a kitchen fire on February 4, 1900; a wind-aided brush fire on Echo Mountain in 1905, which wiped out everything except the observatory and the astronomer’s cabin; a Rubio Canyon flash flood in 1909 that destroyed the Pavilion; and an electrical fire that razed the Tavern in 1936. The line was abandoned after the Los Angeles deluge of March 1938. Today hiking trails exist that let you hike the trail of the Mount Lowe Railway. There are still remains: foundations, mechanical parts, and other remnants of a dream railway in the clouds.

Steven Taylor has collected postcards since his twenties. He has always liked photography and history and feels that postcards check both boxes. Steven is not a single topic collector which explains why he has so many cards. He is retired and lives in Fort Bragg, California.
PrevPreviousCharles Crombie, Cartoonist – The Rules of Golf Postcards
NextUnited States Landmarks – Quiz TwoNext
7 Comments
Oldest
Newest Most Voted
Inline Feedbacks
View all comments
burgie dave

History of Mt. Lowe also captured my attention and have 48 examples. Multiple facts mentioned which I was unaware. Always nice to learn more.

Thank you an excellent article. I have one minor question which relates to the second paragraph which says “Both parents, Clovis and Alpha Lowe were native New Hampshirites and descendants of 17th” What is / was the 17th? Has the paragraph perhaps been cut short in error? I was sorry to read that very little still exists as the ‘Great Incline’ would be a fantastic tourist attraction these days.

17th century, ie the families were there since the 1600s

Wish I could have ridden the Mt. Lowe Railway and seen such attractions as the zoo!

For fifteen months in the early part of the 21st century I lived and worked in Pasadena, CA. I heard about the railway then and now know much more about it. Thank you.

What a great story! But, if I saw that postcard of the Circular Bridge before I got to Pasadena, there’s no way you could have gotten me in that car.

Great article on an amazing subject. There is usually a lot more to what you can see on a card.