How it Looks on Postcards

For all the world to see, Los Angeles, California, is a show. If you think of LA as a tourist, your “must see” list is longer than the time you have. If you think of the city as home, you think of show business, wealth, beautiful people, scenic landscapes, shopping, surfing on high waves, tanning on sandy beaches, and beautiful weather. The city also has a rich history that reaches from the coast of the Pacific Ocean to the San Gabriel Mountains.

It was 1769 when the Spanish explorer Gaspar de Portola named this “newly” discovered area Nuestra Señora la Reina de Los Angeles. The City of Our Lady Queen of the Angels is today the hub of most everything “western.” By the mid-1800s pioneers from around the world came to know of “LA” and were packing their belongings in shipping trunks and Conestoga wagons. When their plans were final, thousands headed west toward the setting sun. The travel wasn’t easy, but mankind has been quite determined to overcome hardship on his way to success.

Investing in Los Angeles – as new citizens arrived, was a spectator’s sport. Businesses sprang up in every corner of the city and dozens of workers stood in line for each available job. The investments had many faces: houses, churches, hotels, markets, manufacturing, and later libraries, museums, theatres, railroad stations, sports stadiums and arenas, schools and colleges, and government. By the 1890s the population reached 50,000 souls and growth was beyond every expectation. Each year of the decade brought something new:

1896 – Colonel Griffith donated land near his ranch to the people of Los Angeles. The people thought that Griffith Park would be an appropriate name.

1897 – The first automobile appeared and soon afterward LA was the first place with a school for auto repair mechanics.

1898 – Los Angeles Symphony Orchestra became the fifth in the nation.

As the Twentieth Century began, new construction in Los Angeles was no longer front-page news. It was expected. Here are some examples. 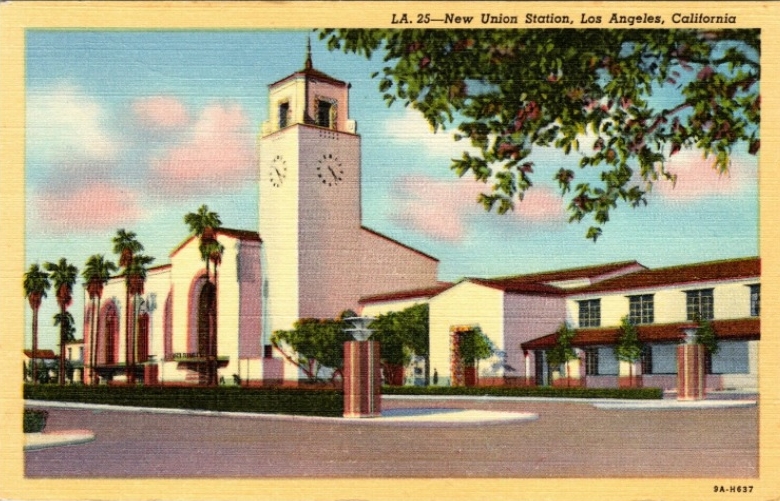 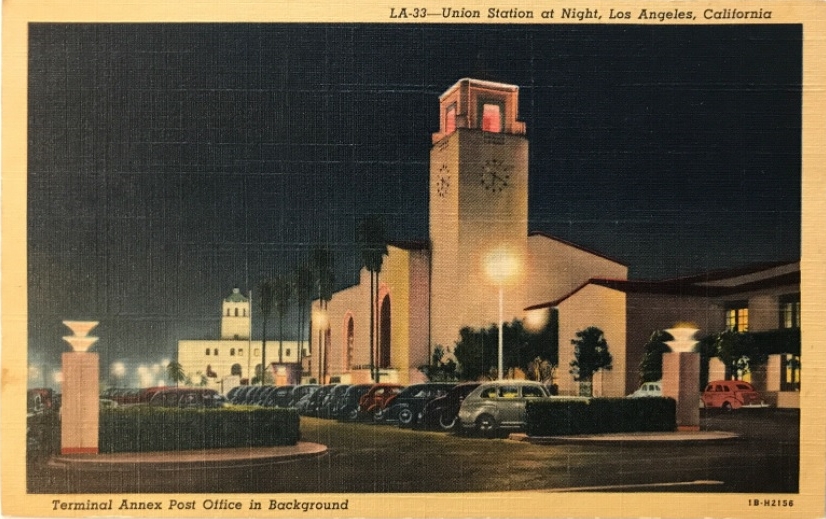 By 1940 operations at Union Station were in full swing. Service was available on the Southern Pacific Railroad, the Santa Fe Railroad, and the Union Pacific. Designed by the Parkinson firm, John and Donald Parkinson surprised travelers with Mission styled ceilings, marble floors and a 135-foot tower featuring clocks that could be seen for half-a-mile.

Today, the City of Los Angeles is home to almost four-million people, it is the second largest city in America. Some detractors have nicknamed it La La Land and Tinseltown, but it still draws 50 million visitors every year and it enjoys a healthy economy where a broad range of professional and cultural fields are open to all-comers. Oh, did I mention how nice the weather is?

Ellie McCrackin is a pen-name used by one of America's foremost archivists. Preferring to remain in the background, Ellie ghost writes for some of the leading world historians. She loves postcards and loves to write about the stories they tell.
PrevPreviousToby, the East African Warthog
NextA Fifth Sunday SpecialNext
5 Comments
Oldest
Newest Most Voted
Inline Feedbacks
View all comments
Ashli Ahrens

What an interesting education in L.A.’s history! Many thanks to Ellie for the words and lovely cards.

What a wonderful description using postcards to take us back in time through Los Angeles. Personally I don’t care for the “welcome to ___” postcards, but that’s just a visual preference. I love the old buildings though. I wonder if the Brown Derby Restaurant still exists.

Keep on writing Ellie, you do a great job!

The Wilshire Boulevard Brown Derby closed in 1980 and was demolished, but the hat-shaped structure was preserved and placed on the roof of the replacement building. I grew up in the Cleveland area, where there was (and still is) a chain of Girves Brown Derby restaurants not connected to the iconic California originals. .

Hello Ellie ! I hope I can meet you in person some day. This LA article and cards of yours “warms the cockles of my heart: I lived in Glendale until 1955 and moved to San Diego when marrying a SD native. Downtown LA on the cards is remembered with joy. I loved riding thru the pictured tunnel on the “red cars” which a family friend wrote and illustrated with his own art. (See “Harlan Hiney.”) Your City Hall info was extra interesting, and other places like the Brown Derby well remembered, too. I may find a card of the… Read more »