The United States Patent Office was created by an act of Congress known as the Patent Act of 1790. This legislation was based on words found in Article 1, Section 8 of the U.S. Constitution: “Congress shall have the power… to promote the progress of science and useful arts by securing for limited times to authors and inventors the exclusive right to their respective writings and discoveries.” Hence a patent on an exclusive design protects an inventor in the same way a copyright protects an author of original works in literature, music, art, architecture, software, and choreography.

The first patent was issued on July 31, 1790; George Washington was president. There are several reasons why some record discrepancies exist, among them a fire in 1836, but an effort to prevent future problems resulted in the publication of a weekly gazette – released every Tuesday – that lists the patents, trademarks, designs, and labels for every item the office approves. 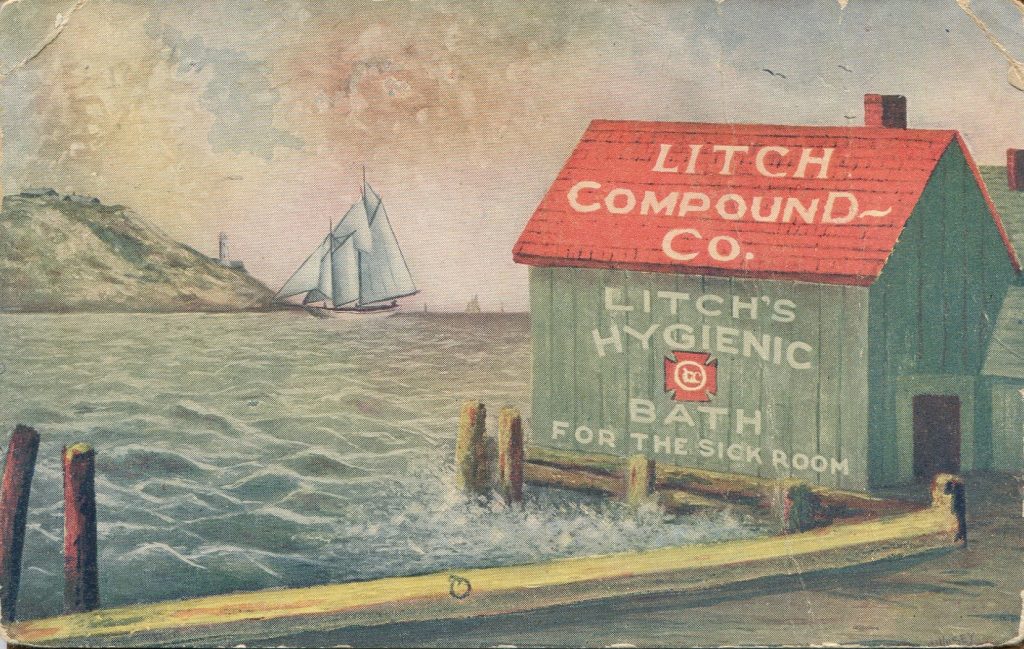 For items such as Litch’s Hygienic Bath liniment that has not been manufactured for years and is long forgotten, The Official Gazette of the United States Patent Office, Containing the Patents, Trade – Marks, Designs and Labels, [issued February 4, 1930,] is the only record in existence.

Today the United States Patent and Trademark Office, known as the USPTO has its headquarters in Alexandria, Virginia, and branch offices across the country. The USPTO still publishes the gazette weekly, but now only in digital form, but still on Tuesdays.

Mr. Litch was born in Annapolis, Nova Scotia, Canada in 1856. He immigrated to Massachusetts with his parents in 1860, married in 1876, and became a naturalized American citizen in 1899. In his own shoe factory, Litch made arch supports that could be inserted into standard shoes sold in everyday shoe stores. He retired in 1924 and later relocated to Florida. His liniment business was mostly experimental. No records were found showing a successful manufacturing operation.

Lemuel died in 1928 in Bradenton, Florida.

The Pall Mall is a street in the Saint James neighborhood of London. It runs from the Admiralty Arch that serves as an entrance to Trafalgar Square to the Victoria Memorial which stands in front of the gate at Buckingham Palace. Along the Pall Mall are many of the most prestigious addresses in London, including Clarence House, Saint James’s Palace, Lancaster House, and the offices of the Commonwealth Foundation. A tour guide was once heard saying, “The most expensive real estate in the world has a Pall Mall address.” 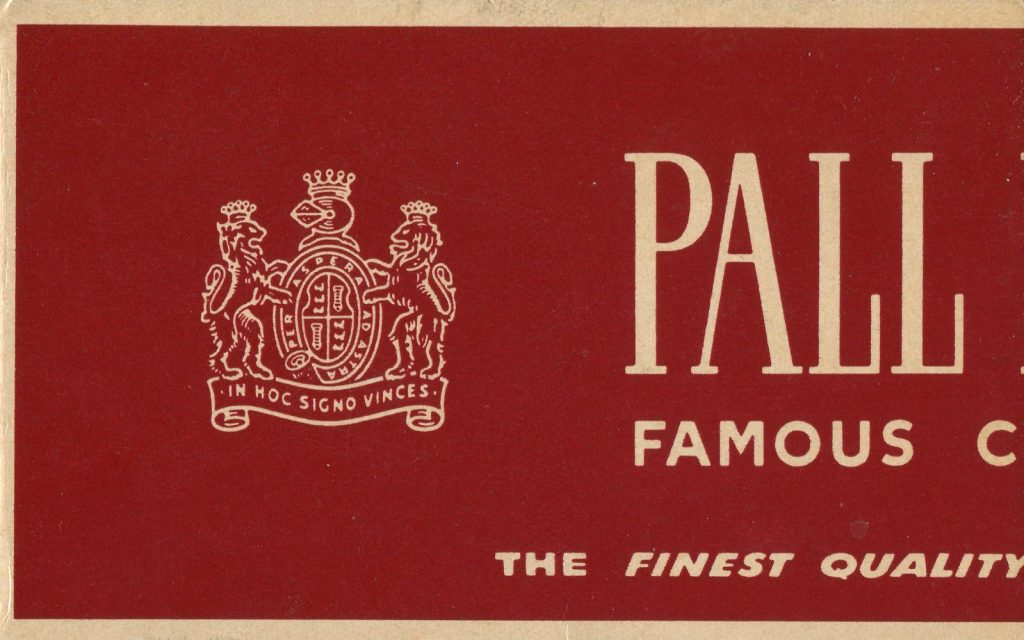 It was for this street that the tobacconists, the Black Butler Company, named their newest product, when in 1899 they unabashedly campaigned for additional sales in the fashionable men’s clubs in the area. “Incomparable!” the ads stated, “none other like it.”

The American Tobacco Company acquired the Pall Mall brand in 1907 and took advantage of its popularity to introduce and test innovations in cigarette design. It was Pall Mall that in 1939 was first to market a King Size cigarette.

The postcard above was discovered more than a dozen years ago. It has remained an unexplored curiosity since it was added to an album of advertisement cards. At first glance it appears to be a perfectly cut to precise dimensions piece of cardboard from a carton of Pall Malls, but that is not the case – it’s a fraud. The hoax is discovered in at least three ways; two will be mentioned. The third you can determine for yourself: HINT, 1963.

If this were a joke and cut from a real cigarette carton wrapper it would be the size of a King Size cigarette (88 mm), not the size of a standard postcard, and it would not have perfectly symmetrical borders. Look at the address side of the card to prove it’s a hoax. 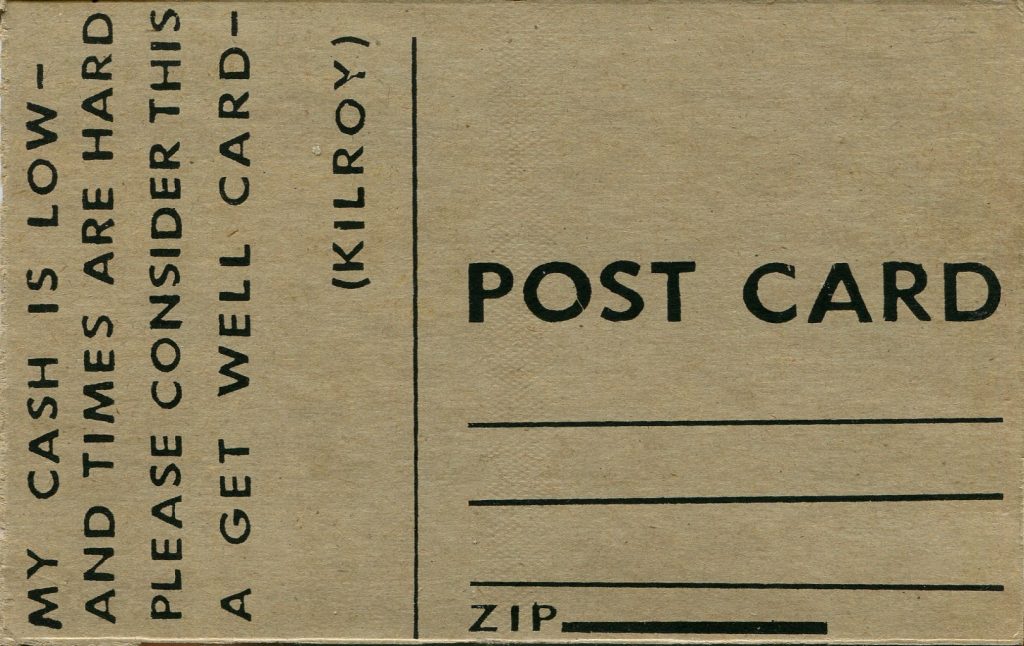 Although some effort was made to learn the name of the color of the Pall Mall package, which I vividly remember, that effort has failed. Suffice it to say that it is called reddish-brown or brownish-red. It is too far from being rust color, but not close enough to be shiraz, brick red, or burgundy. Regardless of the color’s name, it is never mentioned in any history yet found. 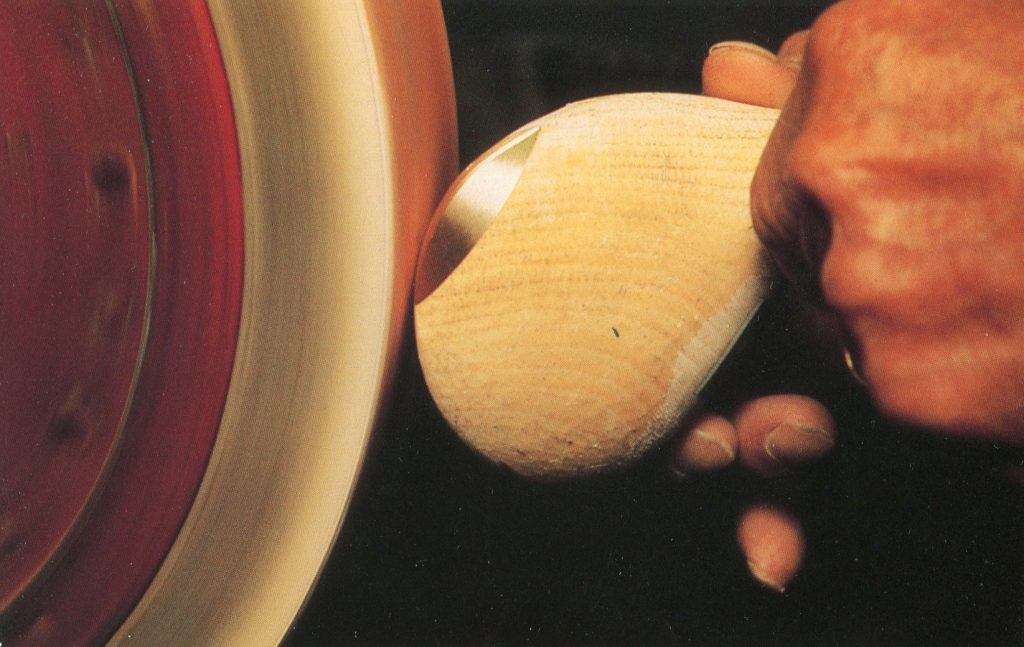 This postcard has been shown to a lot of people with a simple request, “Tell me what you see!” Very few answers are forthcoming, but those who recognize the image, know it as the head of a golf club from the 1960s or ‘70s. A driver or perhaps a three-wood made of persimmon wood with a weighted following edge. It is likely being polished, probably the last step in the 75 different operations in the manufacturing process. After this it will be wrapped and shipped to a golf pro-shop and sold for $30 to $45.

The caption on the card – which is coded “65A71581” – suggests that it is a 1965 advertising card from the Hillerich and Bradsby Company, a firm that first made quality golf clubs in 1916. “PowerBilt” was the brand name on their product line. The last words of the caption state that H & B also has a complete line of irons, metal woods, putters, and accessories.

In addition to its use in golf clubs, persimmon as a hardwood is frequently used for pool cues, drumsticks, and a variety of musical instruments.

The Staff of Postcard History offers this article for your enjoyment. It is a combined effort of many: our publisher, editor, webmaster and collectors/contributors far and wide. Please use the COMMENTS feature below to let us know how we're doing.
PrevPreviousLos Angeles, California: How it Looks on Postcards
NextDeciphering Coney Island – Part INext
5 Comments
Oldest
Newest Most Voted
Inline Feedbacks
View all comments
Howard

Somewhat confused by the Pall Mall card. What makes it a hoax? Why would anyone manufacture this type of postcard? Seems the message was tongue in cheek, and perhaps a postcard put out by a satirical company of some sort? Alas, I did not understand the reference to 1963. That being said, I enjoyed this article, love the unusual postcards!

Was 1963 when the Government required tobacco cos to include in all advertisements the legend that smoking has been determined by the Surgeon General to be harmful to health?

The warning was first required on packages in 1965. My dad kept an unopened pre-warning pack of cigarettes in his saxophone case until he retired from playing a few years before his death. Incidentally, I’m old enough to remember TV ads for Pall Mall Gold 100’s in which the name was pronounced “paul maul”, but the London street is pronounced “pell mell”.

1963 was the year the Zip Code started. That line is on the back of the Pall Mall card.

I echo Howard, but since I have a few hand made cards, I also was not sure it was a hoax. But an enjoyable article.