Analyzing postcards published by and about Coney Island – many of them arriving in the first decade of what has become known as the Postcard Craze – tells us about Coney Island’s unique history as it moved from a utopian dream to a mass market phenomenon to an archetype for urban decline.

In one of the most influential academic papers ever delivered, during the Chicago World’s Columbian Exposition in 1893, the historian Frederick Jackson Turner recognized the closing of the American frontier and speculated what this might do to the American ethos and character. What he did not speculate was that Americans would simply find another frontier for exploration and invention.  Edison’s invention of the incandescent light bulb would make it possible to bring “daylight” to new places and for unimaginable uses. Coney Island represented the recreation of nighttime as a frontier.

At the southern end of Brooklyn, Coney Island would eventually become attached by landfill and become a peninsula. Sections of the island were parceled off and became contiguous neighborhoods like Brighton Beach and Manhattan Beach. Coney Island’s development would proceed slowly, starting out as quiet beachside communities anchored by large resort hotels. The Real Photo Post Card (RPPC) and Private Mailing Cards below published by Raphael Tuck in 1903, H. A. Rost in 1900 and Detroit Photographic in 1900 reflect this early stage: 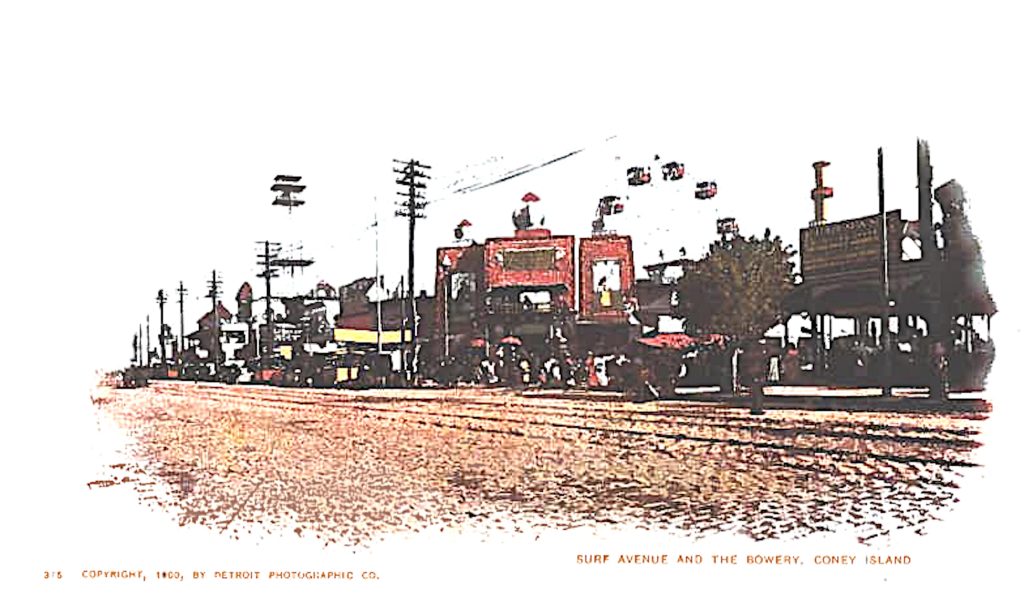 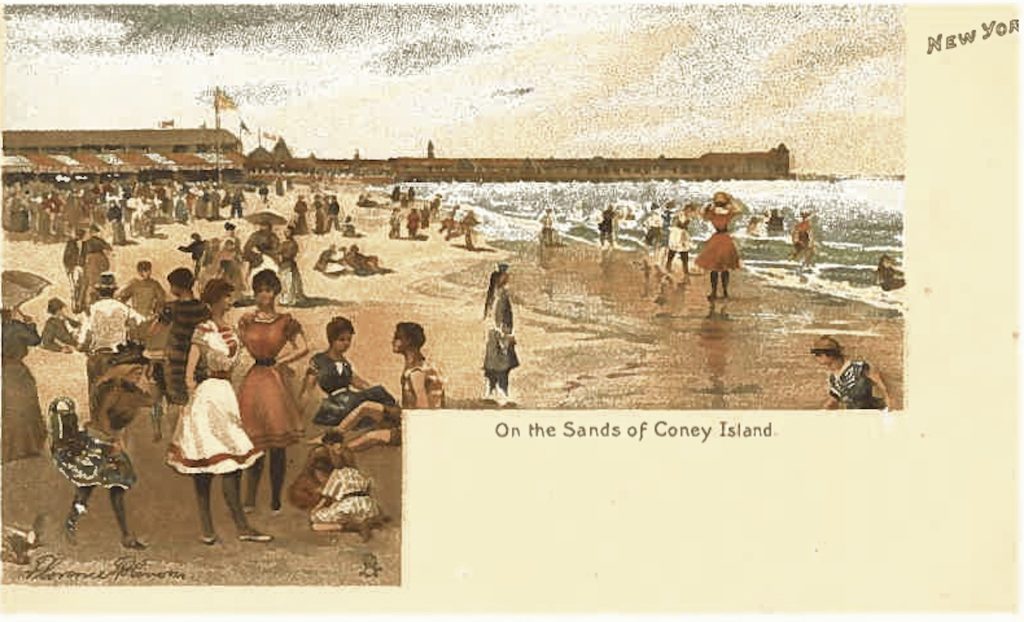 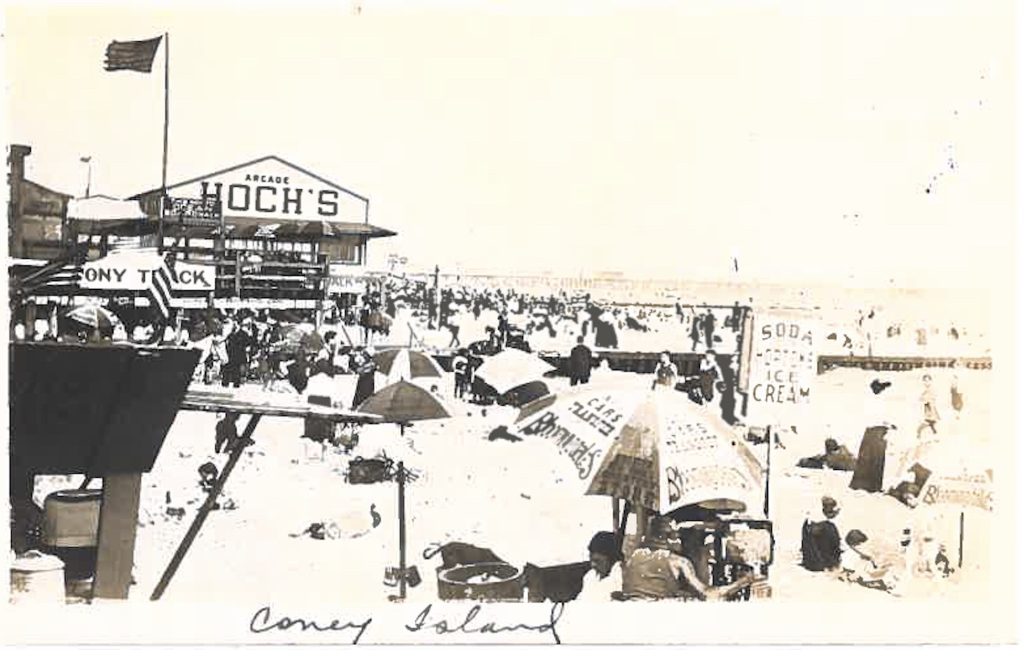 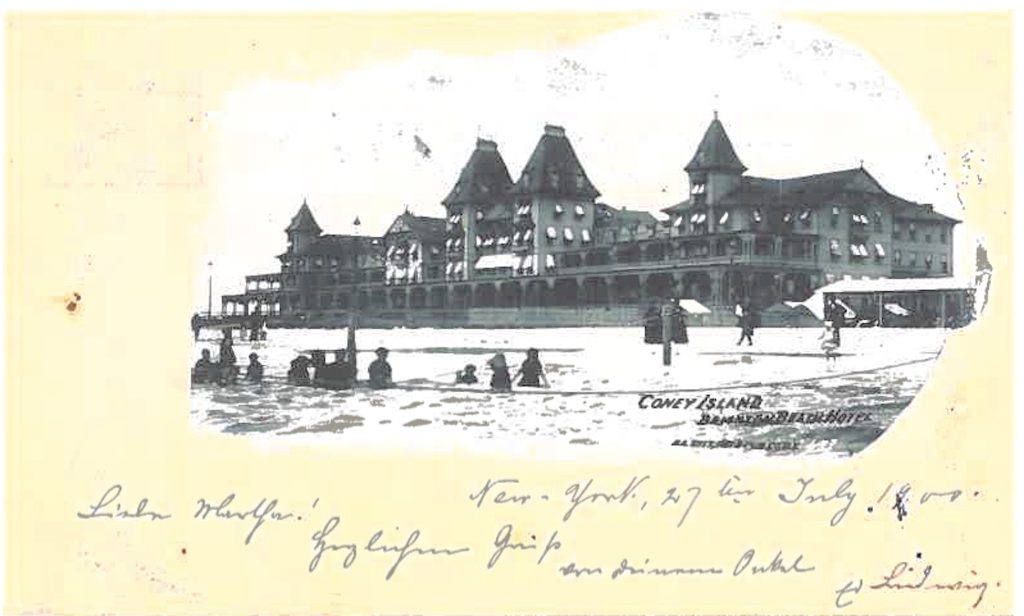 As Coney Island evolved from a genteel resort to mass entertainment, it followed a plan to mix independent privately-owned amusement stands with larger parks offering more diversified entertainment. George C. Tilyou’s Steeplechase Park opened in 1897. Luna Park opened in 1903 and Dreamland opened a year later. This beautiful set of illustrated cards by Raphael Tuck signed by Charles Flower shows the delight and fascination delivered by the night sky in an area illuminated by a million incandescent light bulbs. 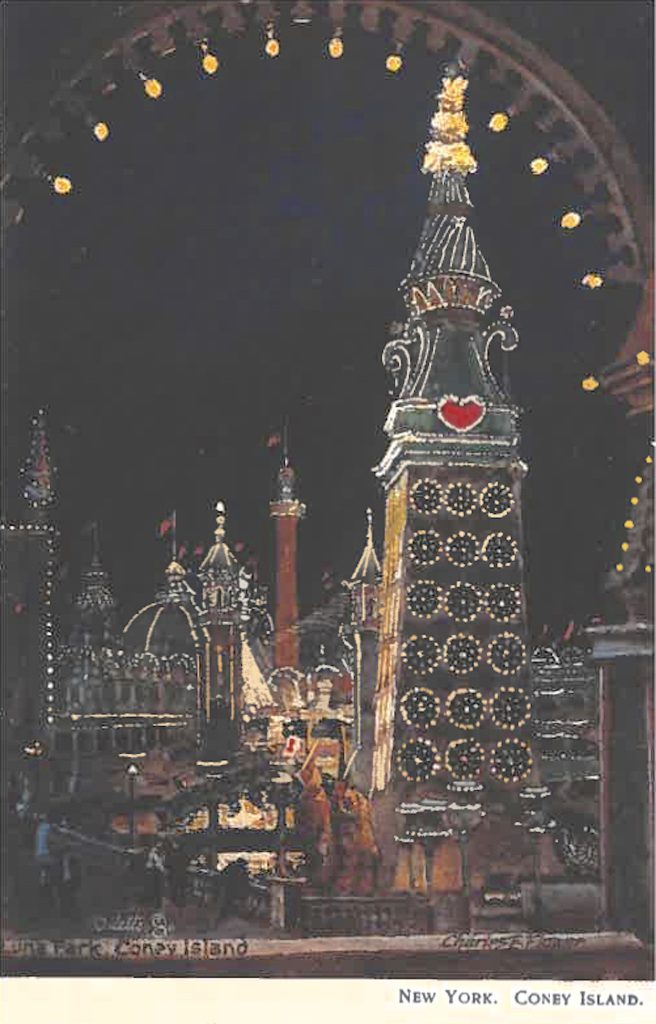 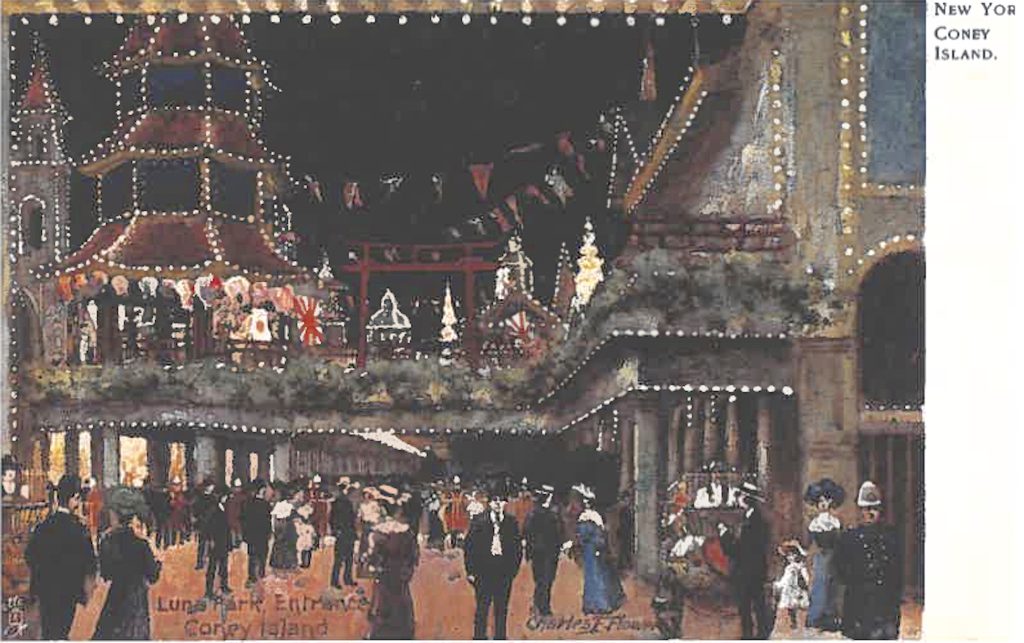 A similar set of illustrated cards by J. Koehler is among the most beautiful and still desirable historic postcards available in the hobby. These come both in flat and hold-to-light versions that become illuminated when a light is held behind the card. The “Hold-to-Light” card is one of the types in a category called “Novelties” by collectors. Coney Island cards are replete with novelties that show off advances in printing processes among publishers. For example, the next card illustrates an embossed feature, in this case seashells around the postcard image.

Analyzing postcards published by and about Coney Island – many of them arriving in the first decade of what has become known as the Postcard Craze – tells us about Coney Island’s unique history as it moved from a utopian dream to a mass market phenomenon to an archetype for urban decline. 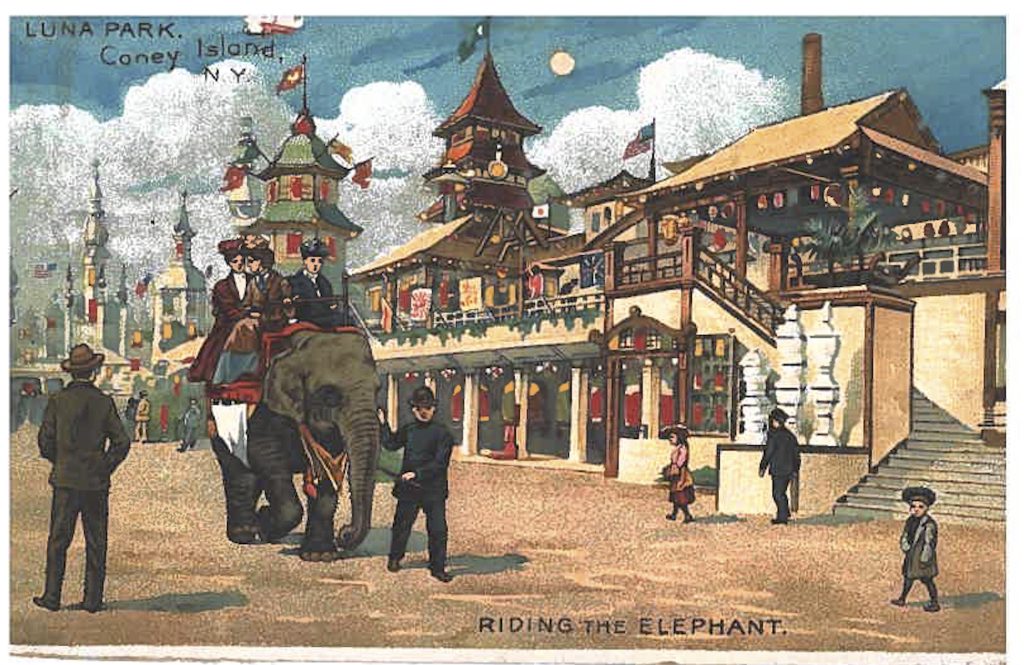 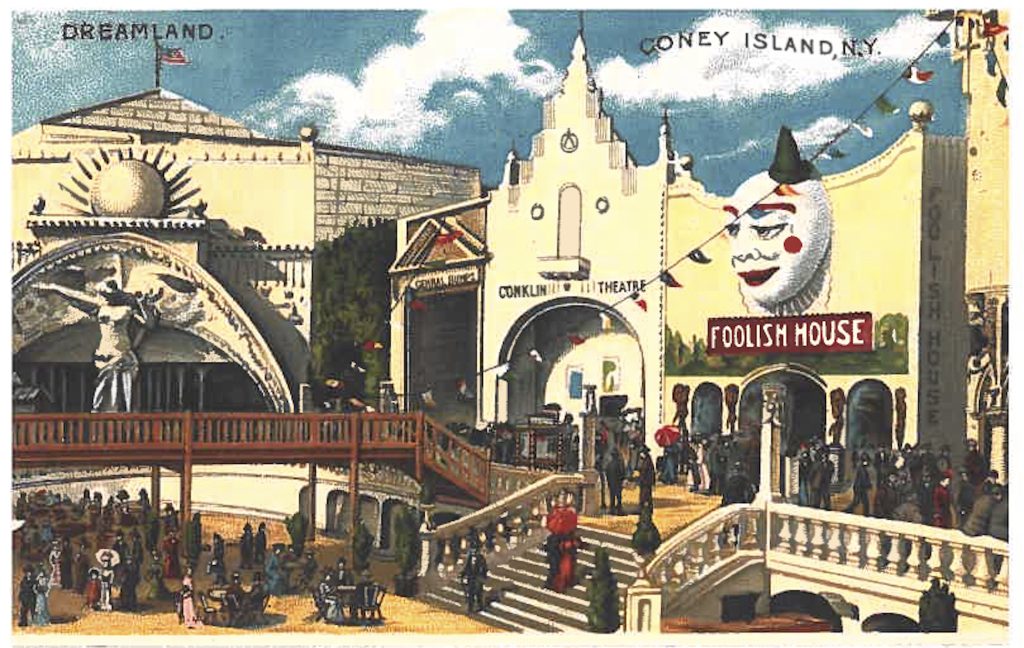 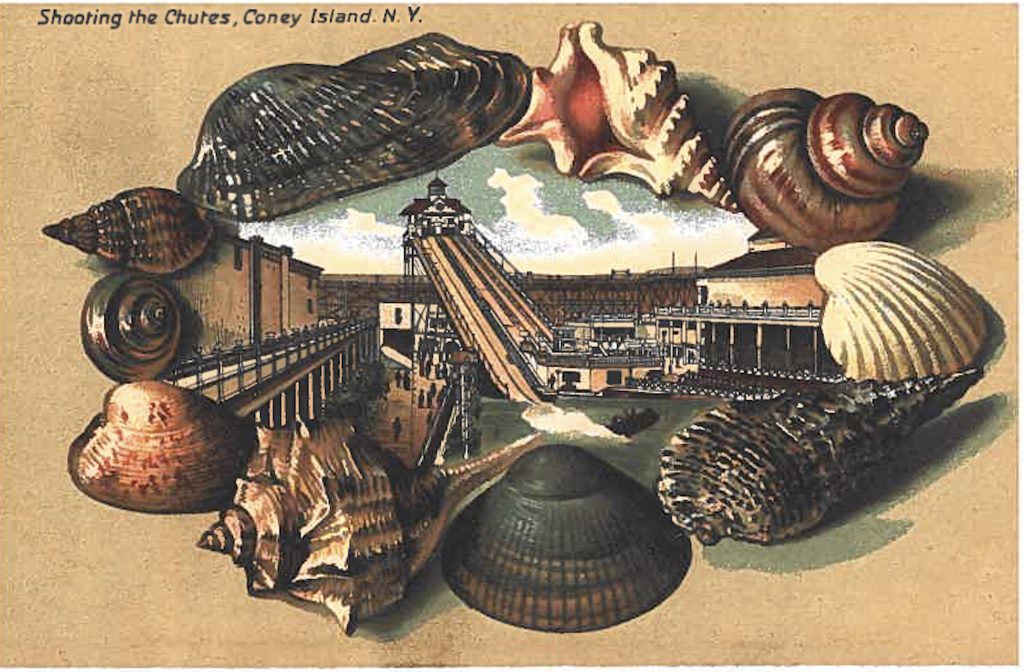 It’s no surprise then, that many of Coney Island’s postcards deal with the transformation of night and show scenes of amusement park activities taking place under the moon. It seems unsurprising and almost normal in this scene of a ride at Steeplechase Park but what is happening here is the integration of activities beyond dreaming into a time of day formerly dominated by sleep. 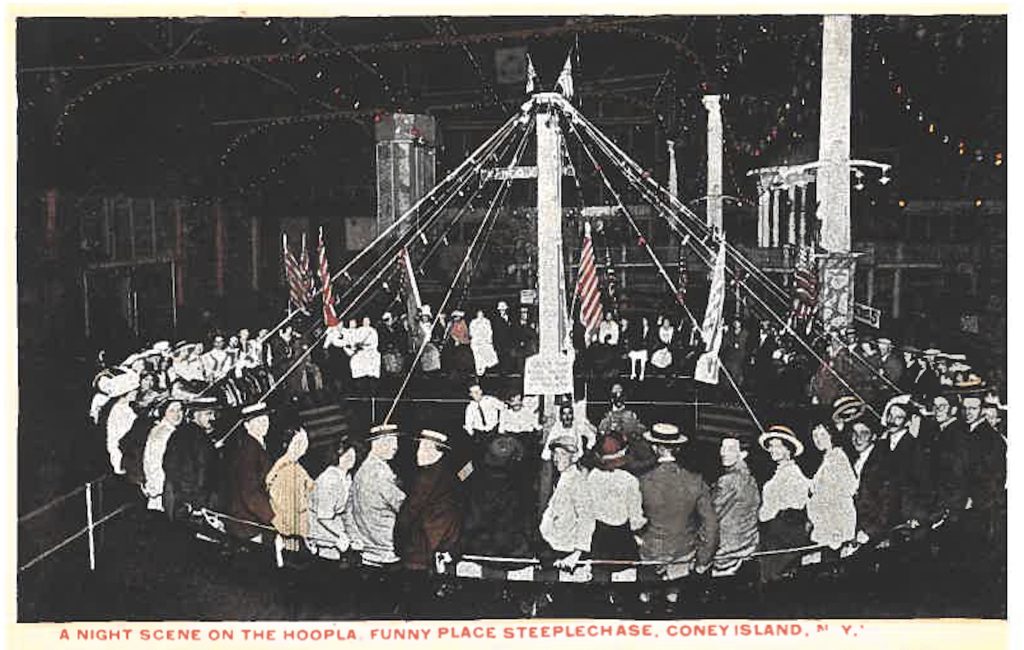 Another piece of the Coney Island metaphor is its deep devotion to democracy – including the mixing of social classes and social types beyond any context previously known. The two decades on either side of the centennial divide was a period of massive immigration to America’s shores and the idea that undergirded this movement was that of “freedom.” For many, this represented release from restrictive mores of the “Old Country” for others, it spoke to entrepreneurialism and creativity in America’s environment of free-market capitalism.

Thus, many Coney Island postcards portrayed technological marvels and the height of imagination. 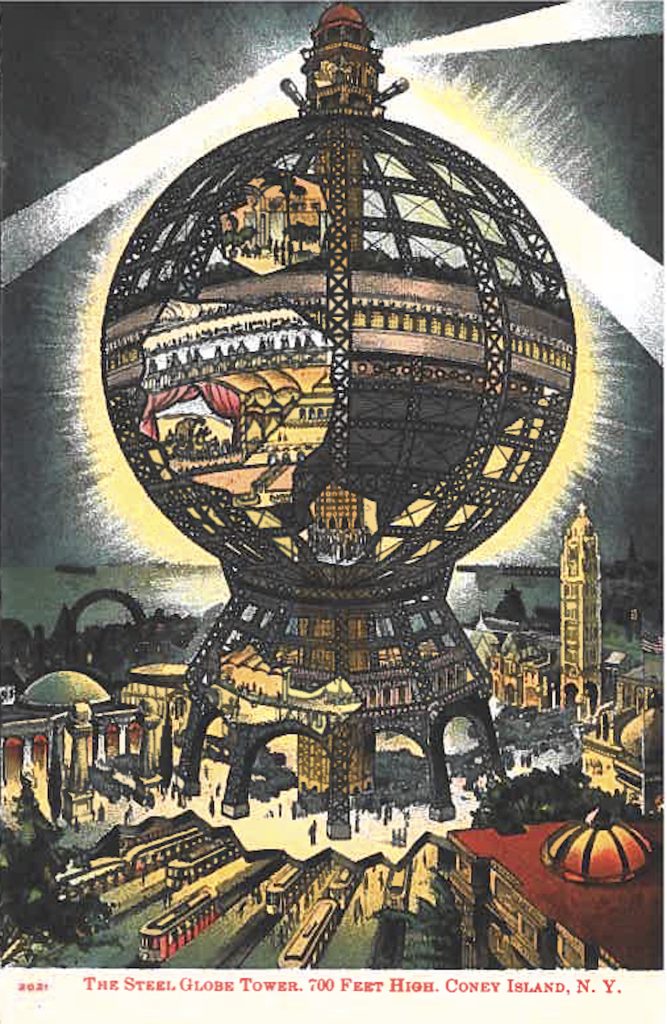 During Coney Island’s early years, a popular form of entertainment was the “Spectacle” in which large numbers of performers were organized to reproduce a historical moment or piece of literature. The work of Jules Verne, the most popular writer of science fiction in his time was a theme that drew in the crowds at Coney Island. 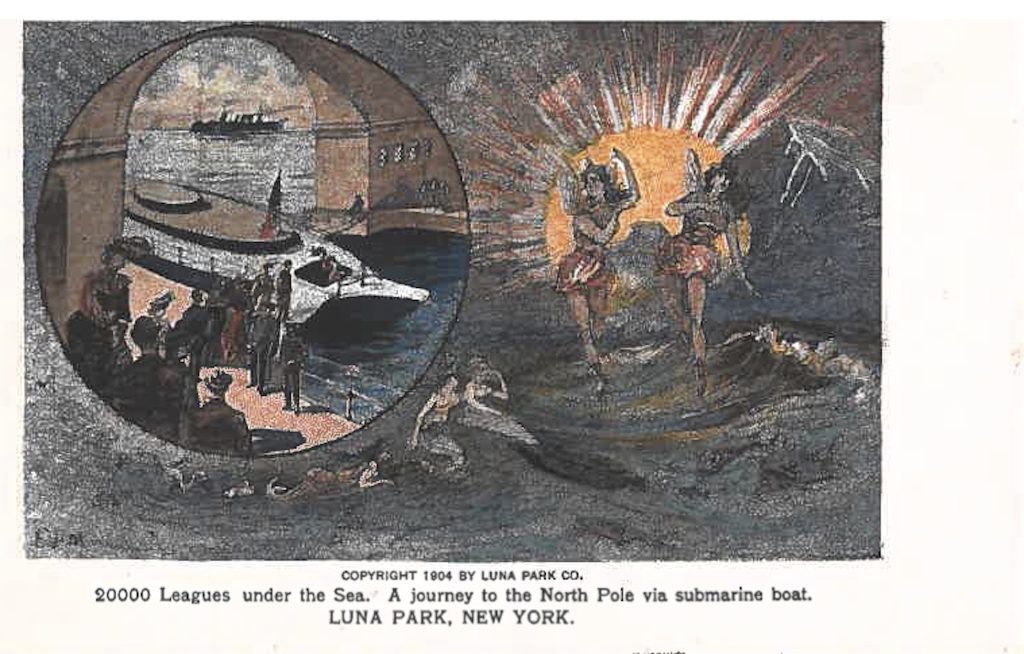 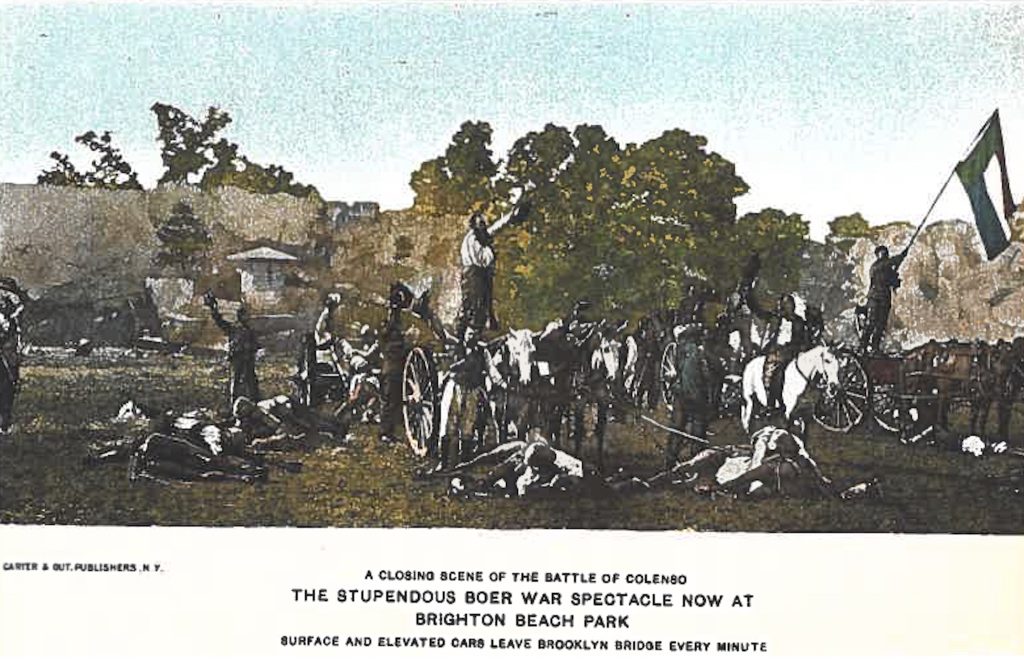 The runaway technology in the first decade of the 20th century was the automobile and very few could resist imagining themselves driving a car. The picture studios at Coney Island helped these fantasies along by supplying an auto in which visitors could get real photo postcards made of themselves. In most families, these photos of “my first time in a car” became lifelong souvenirs to recall a Coney Island visit. This one from my wife’s family shows the Hirsch sisters “riding” in a car, including her grandmother Bessie on the left. 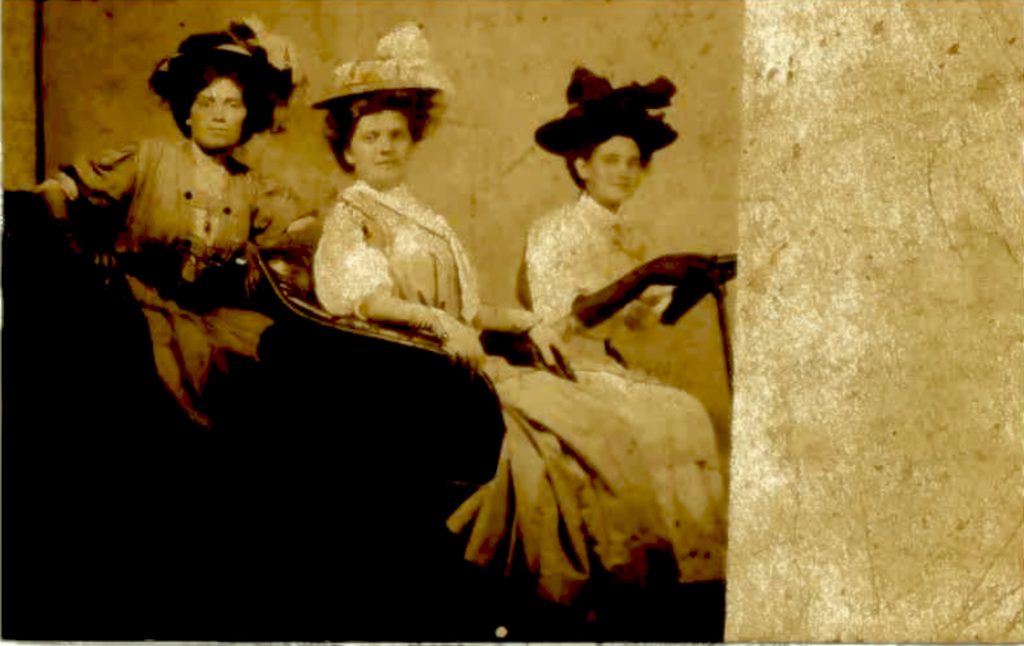 For others, the ideas of freedom and independence were associated with romantic love and the aspiration to select your own marital partner rather than leaving that choice to family members. Thus, many Coney Island postcards illustrate romance and marital harmony. 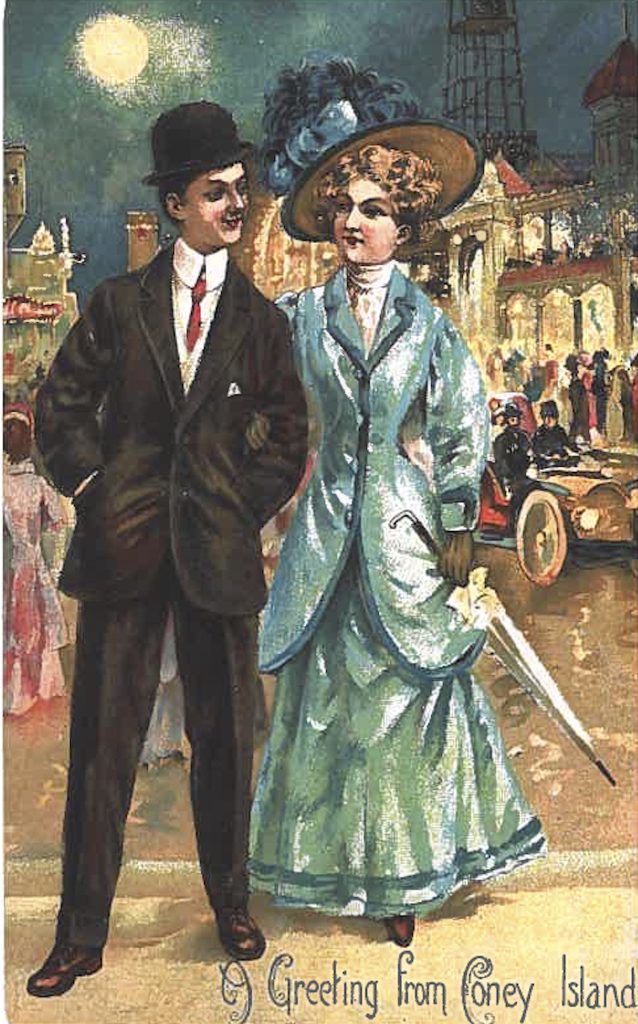 As noted earlier, Coney Island’s original concept called for the creation of a series of larger parks interspersed by smaller exhibits and spectacles. These three grand parks – Luna Park, Dreamland and Steeplechase Park all burned to the ground in utterly destructive fires. Steeplechase Park was the only amusement park of the three that was rebuilt after the devastation depicted in this postcard. 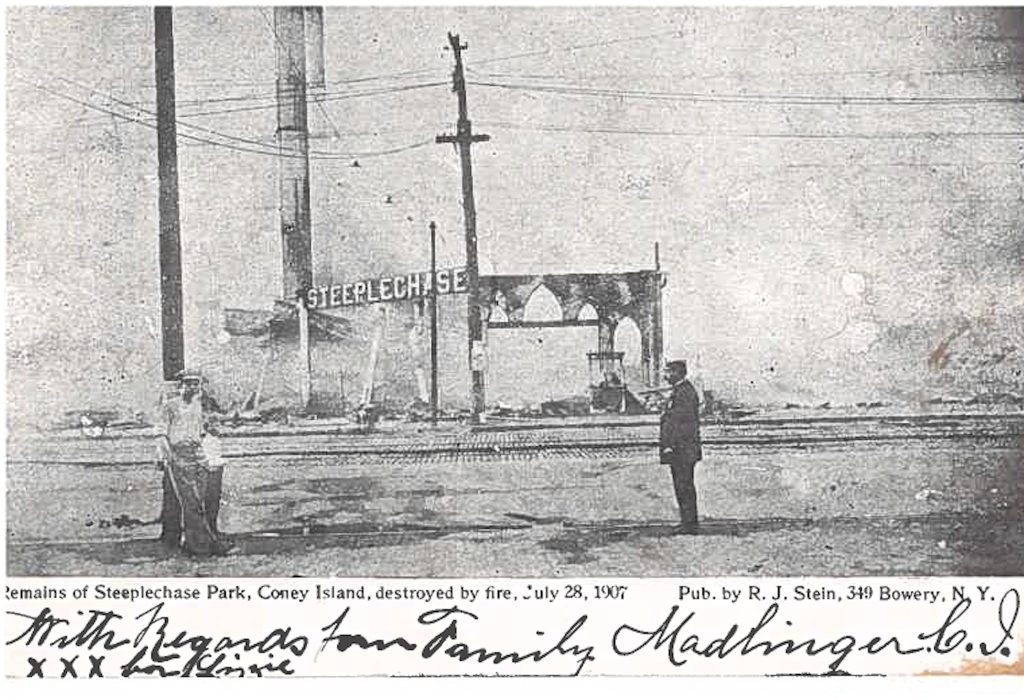 Coney Island’s growth would have been impossible without the invention of mass transportation. The development of New York’s streetcar and subway system and its expansion throughout the city guaranteed that people could flock to the amusement parks at any time of day or night for an investment of just five cents. The station at Coney Island turned out to become the most heavily used destination in the entire subway system. In its early stages Coney Island was also served by ferry boats; these were also overcrowded and oversubscribed. 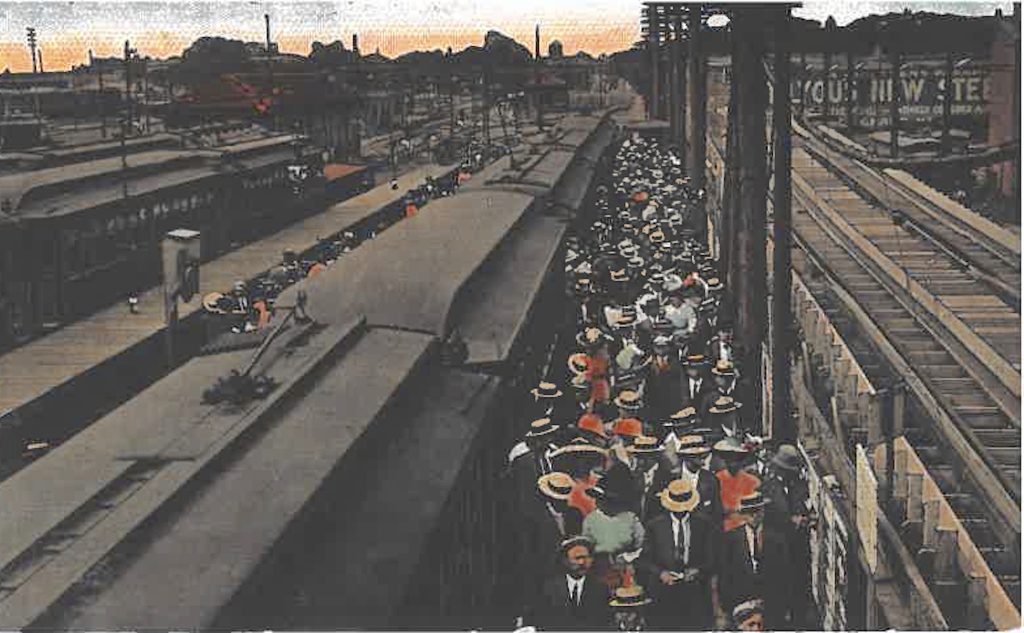 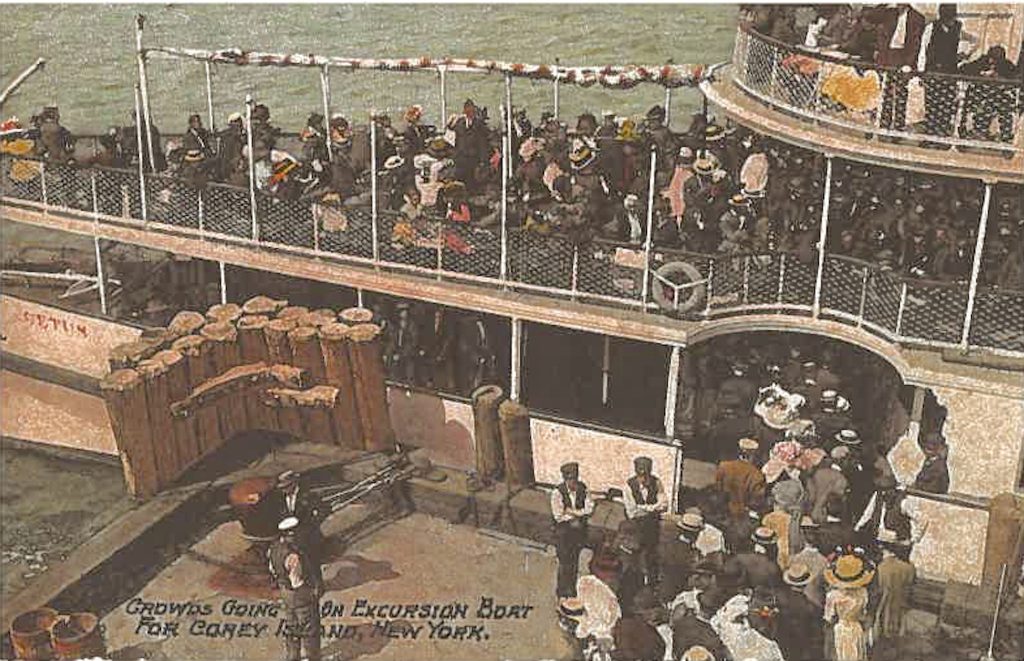 There is more to come. Return on Wednesday for Part II.

Most enjoyable! The article and cards were wonderful. They led me to learn more about Steeplechase Park and most fascinating of all to me, the Steel Globe Tower! Once again life has been enriched by this wonderful magazine.

Another great informative article about a subject that has always fascinated me, especially the 19th and early 20th century periods. . The steeplechase ride scared the crap out of me just to look at it, and my one (and only) ride on the Cyclone was enough to ensure a lifelong dislike of roller coasters.

My writing and wrist are fractured, but the postcards tell a wonderful story
Thank you.

The fact that a Coney Island attraction supplied many people with their first experience of sitting in a car shows how different life was a little over a century ago. Where I live in Indiana, “with coney” is a phrase used to describe a hot dog covered in a ground beef sauce.