The Copacabana vs. the Latin Quarter

Great rivalries and competitions have always fueled memories and legends. In New York it was the Yankees vs. the Red Sox, Macy’s vs. Gimbel’s, Brooklyn vs. The Bronx. And, in the world of the city’s nightclubs, the two venues that vied for the position of New York’s top club were the Copacabana, known as the “Copa” and the Latin Quarter also known as the “LQ.”

Both nightclubs were superior places for impressing a business client or prospect and for celebrating the good fortune of a family member or friend. They both featured the top performers in the entertainment world – Frank Sinatra, Sammy Davis, Jr., Ella Fitzgerald, Dean Martin and Jerry Lewis and many others who had gone from obscurity in the hinterlands to headliners in the greatest city on Earth.

New York City, in the period between the end of Prohibition and the rise of the rock generation after Woodstock, was well positioned as the place where it all happened: an effervescent music scene populated by those who passed through or settled at this transcendent transportation hub. Whether they came from a disintegrating Europe or elsewhere in the United States – from New York, New Jersey and New Orleans, Kansas City, Chicago, or Peru, Indiana – performers could find peers and an accepting audience.

One such musical entrepreneur who ended up in New York was Lou Walters, a quiet though intense English-born son of a London tailor. Lou Walters was determined to bring the essence of Paris nightclubs to Times Square. Having started as a Vaudeville agent, he knew that the entertainment business could experience dramatic swings from overwhelming plenty to embarrassing penury depending on where he placed his bets. When Vaudeville’s trendiness faded, Walters gambled on the Latin Quarter, a nightclub that mixed elegant surroundings with gorgeous women – some of them stunningly dressed by Art Deco superstar Erté – with great food and a devil-may-care attitude that kept the clientele coming back.

Reflecting on her father, the famed journalist and TV personality Barbara Walters, who grew up among the customers, stars and chorines that peopled Lou Walters’ world has said, “Celebrities, money and fame come and go. I learned about not being in awe of anybody from seeing those stars, but I always felt that I was on the outside looking in.” Her daddy could provide baubles and high living in good years but never a sense of security. “We always lived in penthouses. He gave a touch of flamboyance to our lives. I was proud of my dad but embarrassed too when I got older because he ran nightclubs and we’d spend our holidays there…Our family was unusually close, and that helps one survive too. Even so, I always knew I’d have to support myself. Dad made and lost lots of money. “ 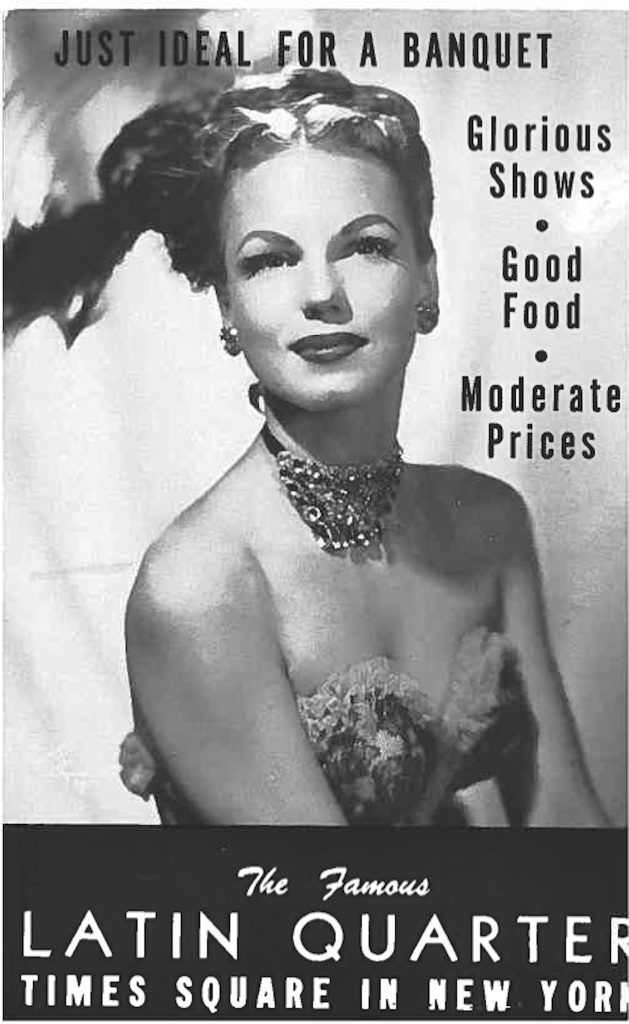 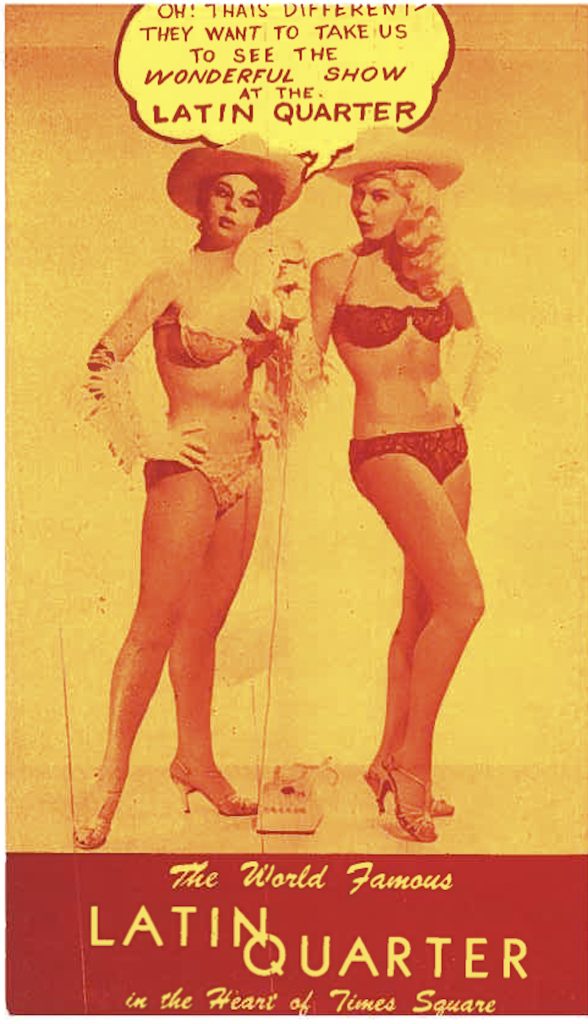 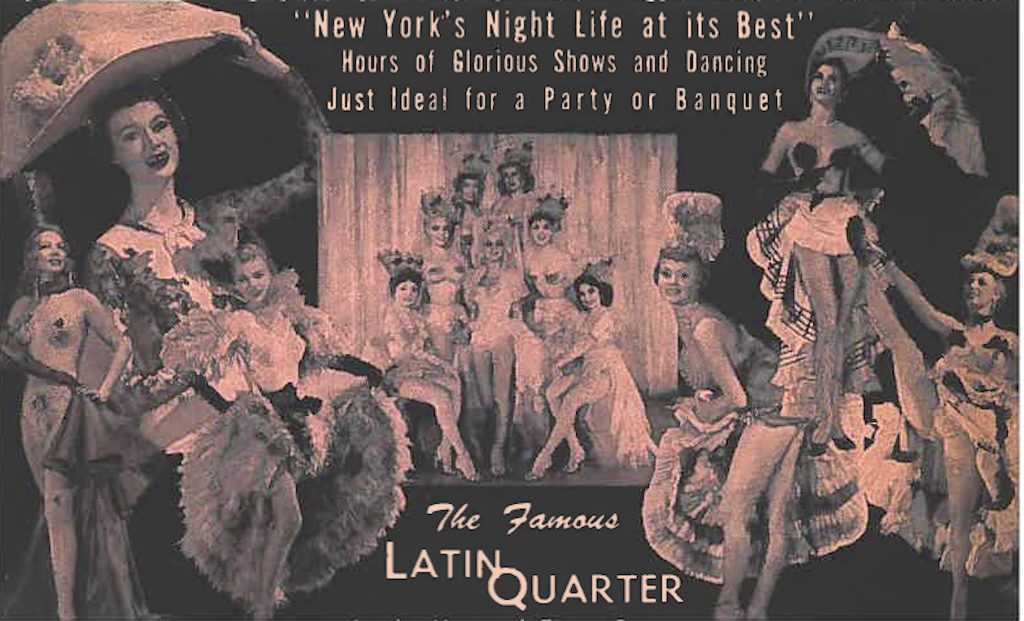 However, the Latin Quarter’s cards go beyond mere erotica. Scenes of crowds advancing into the nightclub’s front door in mass confusion contrasted with cards showing those crowds seated in an orderly audience are there to illustrate that this was a popular place strategically located at the center of the city and eager to accommodate large groups. 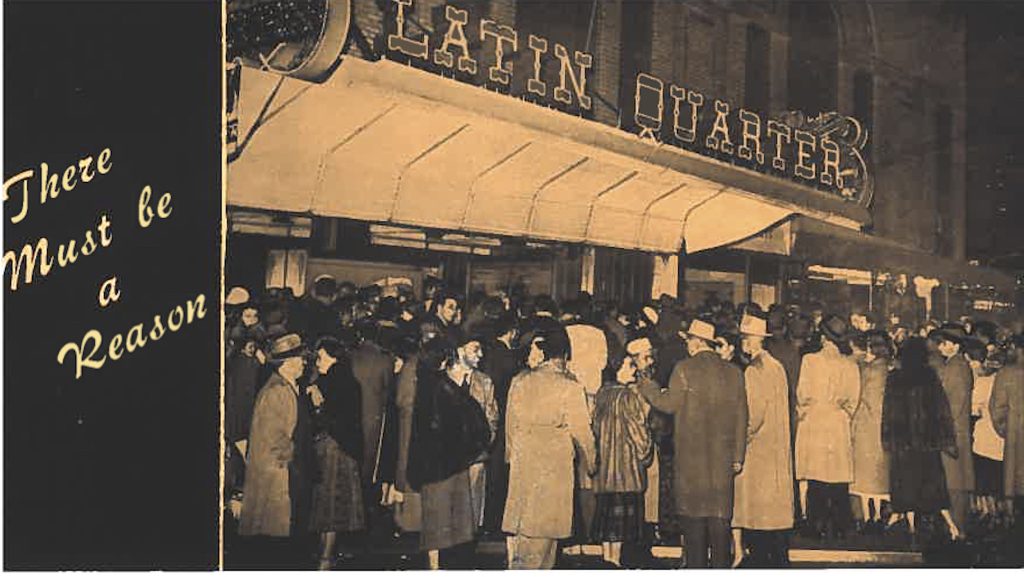 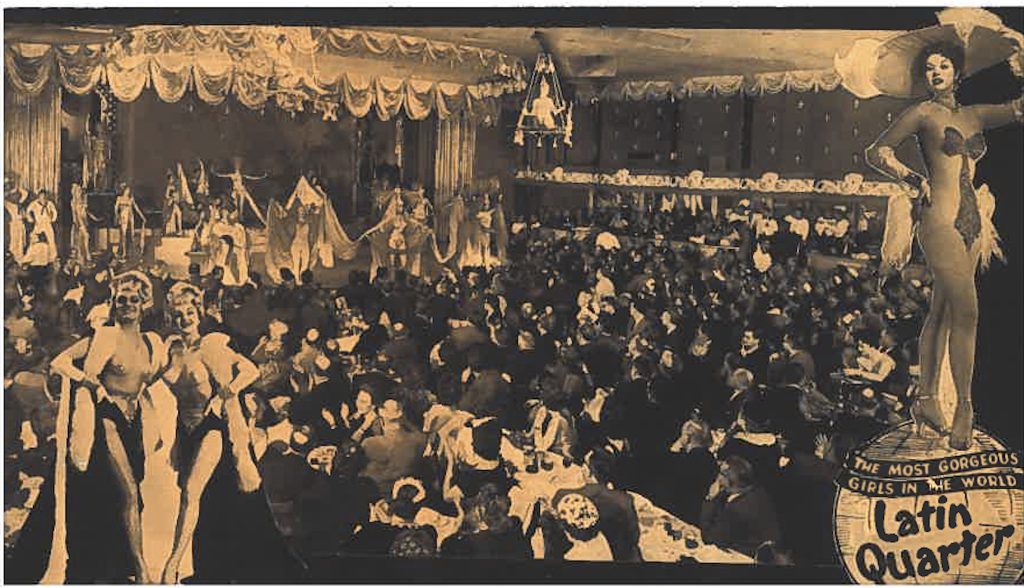 The setting was well-known. The three-story building at the 47th-48th street end of Times Square had been the location of the Casino Royale at its start. Then, briefly in the 1930s it was the scene of the Cotton Club, after that classic African American boîte deserted its original home in Harlem. The house is sometimes identified as the “Coca-Cola Building” named for a frequent advertiser on its prominent Times Square facing side. 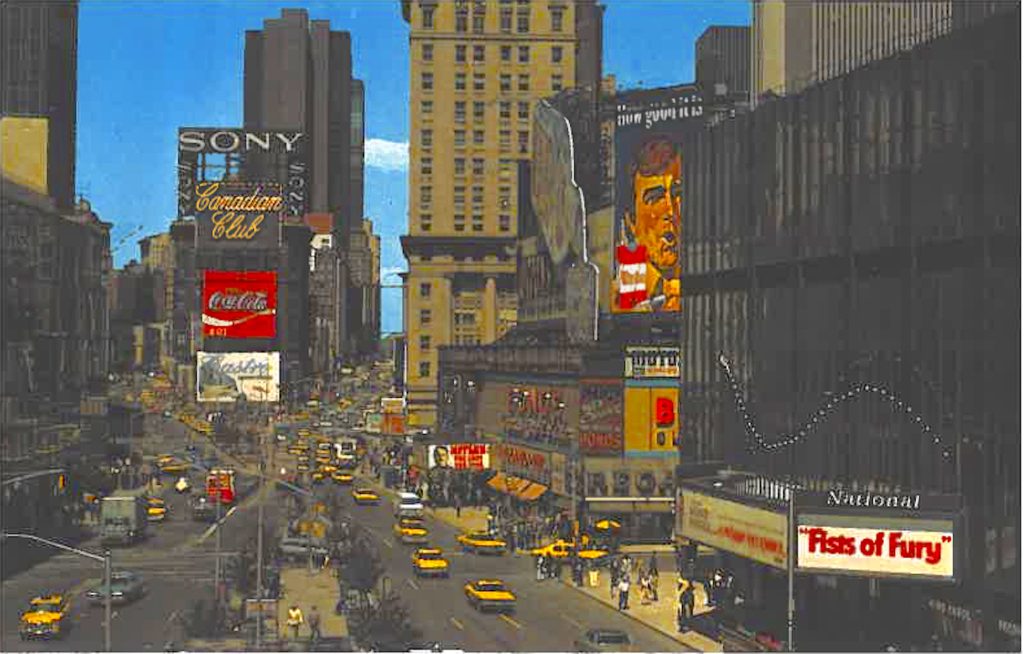 There are more postcards that help to tell the Latin Quarter story. This 1959 studio postcard of actress Arlene Dahl shows a beautiful star who began her career as an 18-year-old dancer at the LQ. 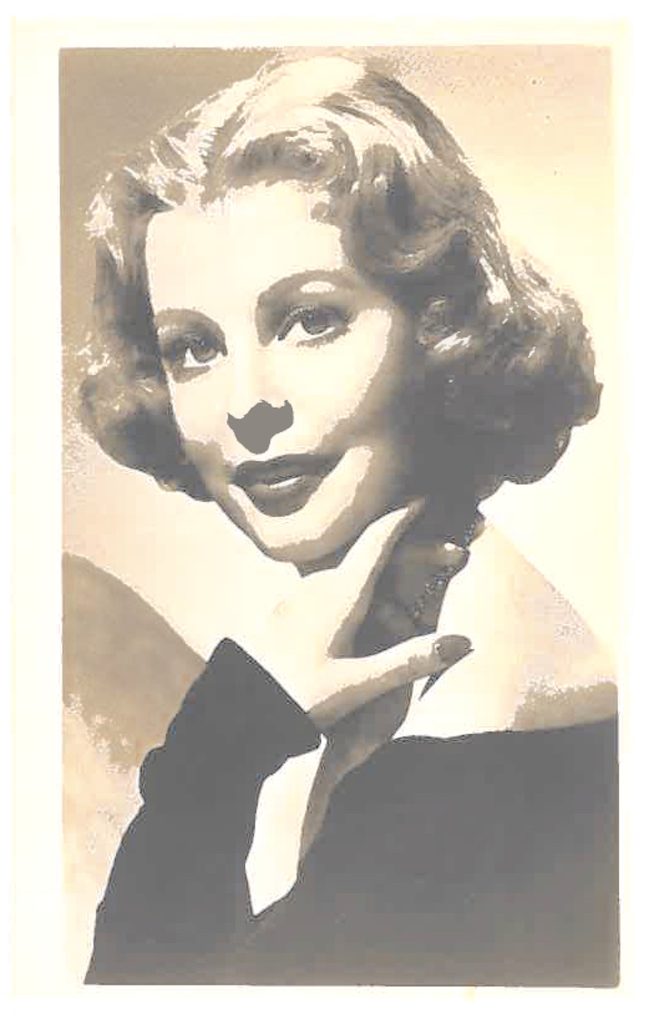 This 1943 postcard advertises a Ziegfeld Follies revival that was not a success for Lou Walters, the show’s principal investor. 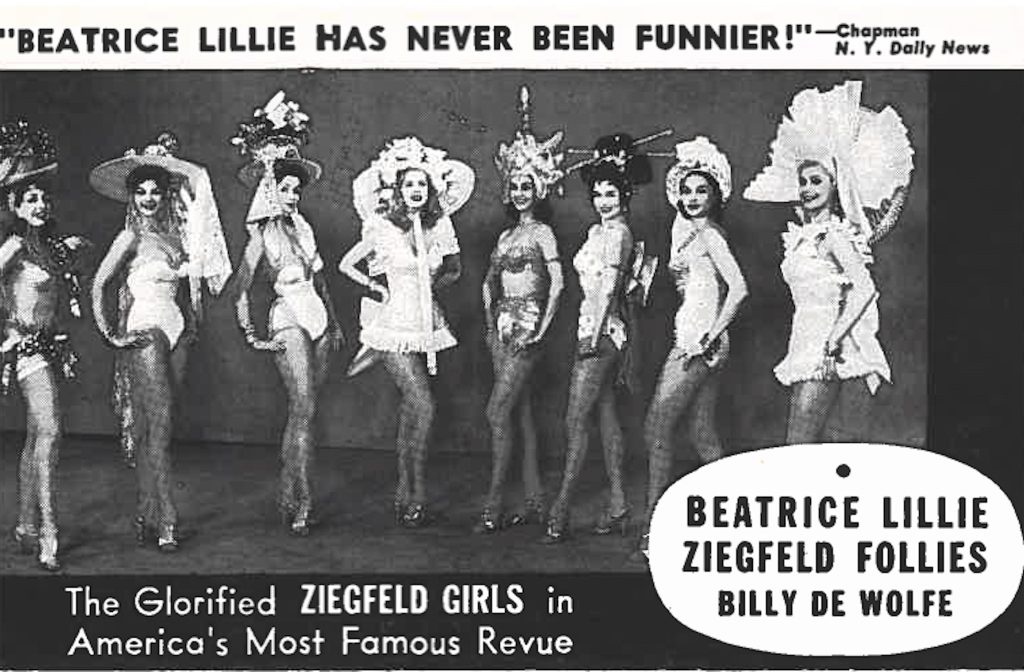 Cards from the Latin Quarter try very hard to make a visit seem respectable. The next two postcards – one standard sized and the other giant sized with a bawdy LQ gal at each center – try to show that a visit to Lou Walters’ LATIN QUARTER is as essential to a complete trip to New York as stopovers at Radio City Music Hall, the Statue of Liberty, the Empire State Building, and St. Patrick’s Cathedral! Evidence suggests that this ad strategy worked. At its peak, the LQ became the second most visited site in New York City. 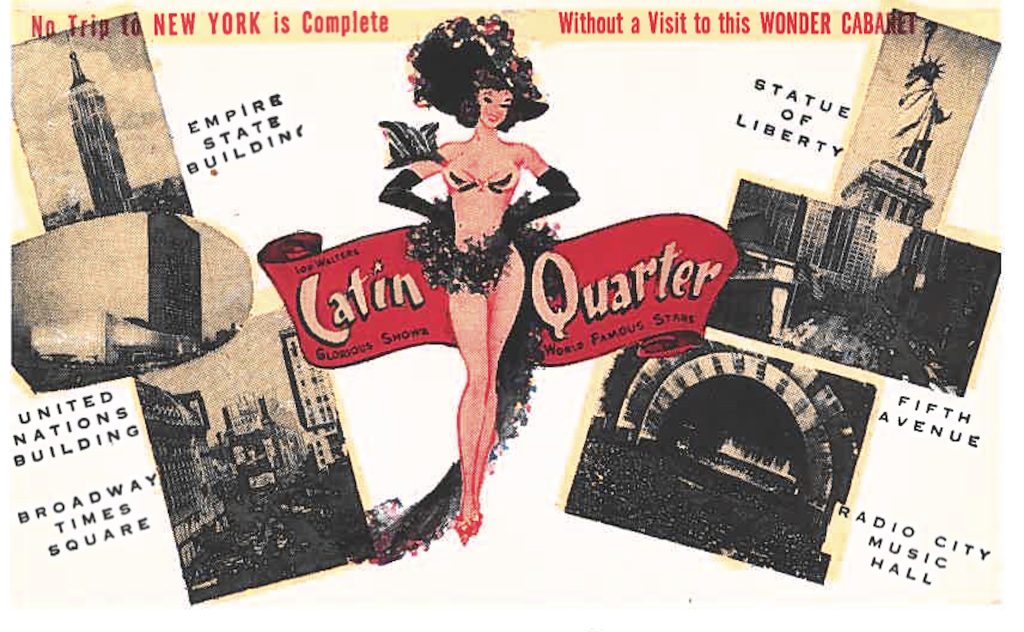 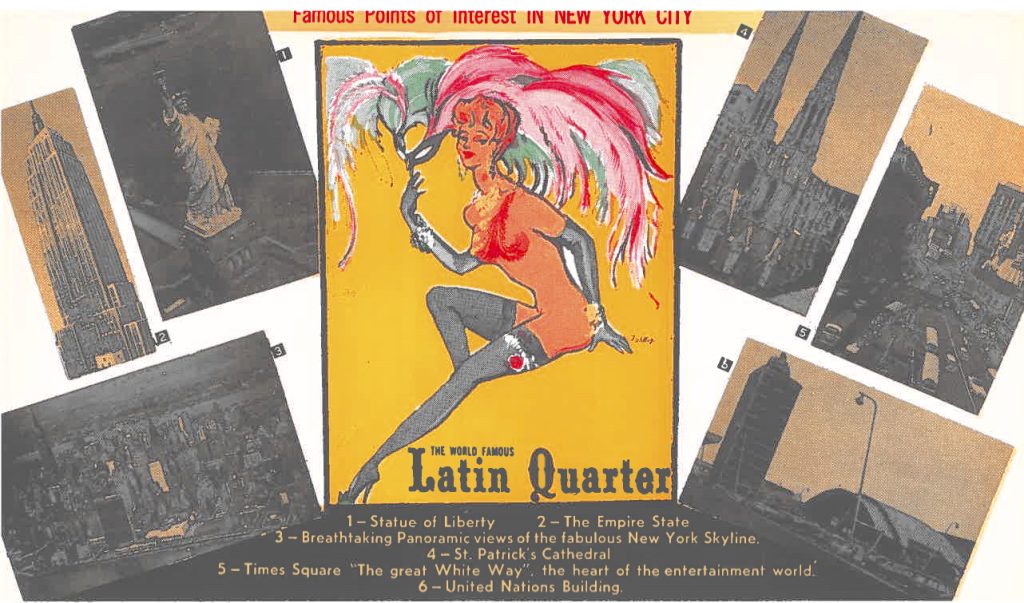 Perhaps this also was a way to distinguish the LQ from the Copacabana, which had a somewhat less respectable reputation. Although it was started by another Englishman, Monty Proser (1904-1973), the Copa was bankrolled from the start by Mafia mobster Frank Costello and his associates.

The Copa was located in “a basement of a hotel just off Fifth Avenue and always hazy from cigarette smoke,” recalled Barbara Walters, daughter of the fellow who owned their top competitor. “But it had the most beautiful line of girls, the celebrated ‘Copa girls.’ They could barely dance, but they didn’t have to. They just smiled and walked slowly and looked gorgeous.”

The Copacabana was named after the famous beach and beachside community in Rio de Janeiro, Brazil. It also recalls the glamorous Copacabana Beach Hotel, an international star hangout and the most chic place to stay in Brazil during its Art Deco era.

The neighborhood has gotten a bit tired and overbuilt in the intervening years; other neighborhoods farther south down the Rio coast have overtaken Copacabana for glamor. The Hotel keeps promising an update. However, its natural location and abundant breezes, not to mention the young Brazilians who continue to flock there in minimalist bikinis, continue to make Copacabana a worthwhile destination.

The New York nightclub Copacabana continued to brand itself with a Carmen Miranda look-alike image that it used on menus, matchbooks and postcards. Carmen Miranda (1909-1955) was a singer and dancer who stood for Brazil, even though she herself was born in Portugal as Maria do Carmo Miranda da Cunha. Prior to a career that brought her to the heights of Hollywood and Broadway, she apprenticed as a hat maker and created the fruit-topped design that was consistent with the Afro-Brazilian character type, the “Baiana” (influenced by residents of Bahia province in northeast Brazil and its capitol Salvador), known for its variant expressions of religious and Carnaval culture and its unique costumes.

The fruit-topped hat inextricably tied Carmen Miranda’s image to Brazil though it did not prevent her from becoming by 1945, the highest paid woman in the United States and the first South American to earn a star in the Hollywood Walk of Fame. She was a leader of Brazil’s popular “Samba” style of music back home and her contributions to Samba are honored down to this very day.

It’s difficult to determine whether the star and the nightclub had a formal agreement to use the image. Carmen made a film in 1947 called Copacabana with Groucho Marx and the brother of one of the film’s backers married the Brazilian star shortly afterwards. The backers may have thought that having the club use her image would be a form of publicity for the film.

All the postcards promoting the Copacabana sometime after 1950 or so began to list the cover charge or minimum for food and drink as overprints. The postcards feature the same Carmen Miranda look-alike image, signed by artist Wesley Morys. As inflation drove restaurant prices upwards as the decades proceeded, a collection of Copa cards becomes a curious record of inflationary trends in the postwar era. 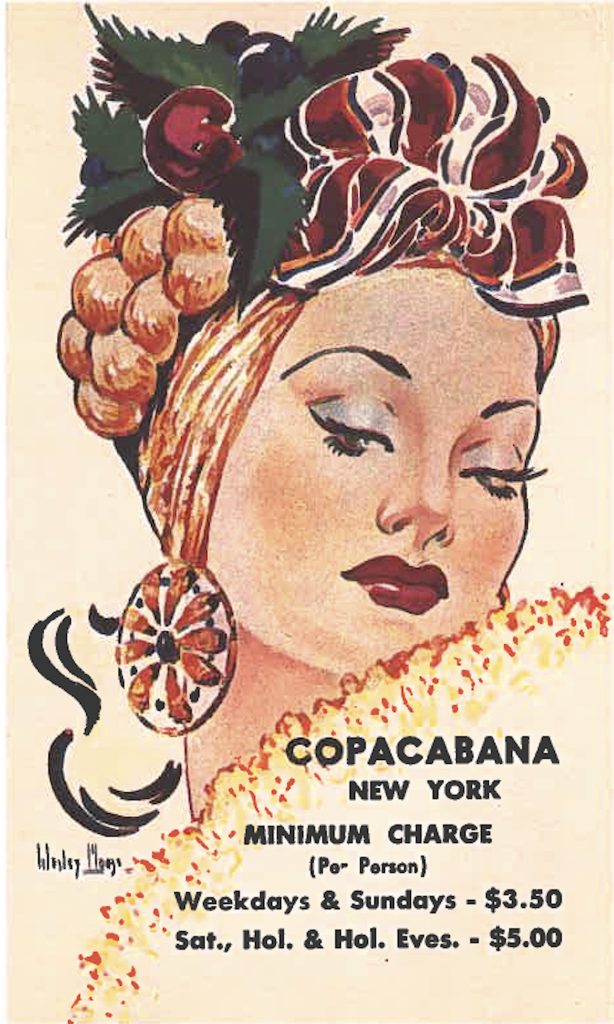 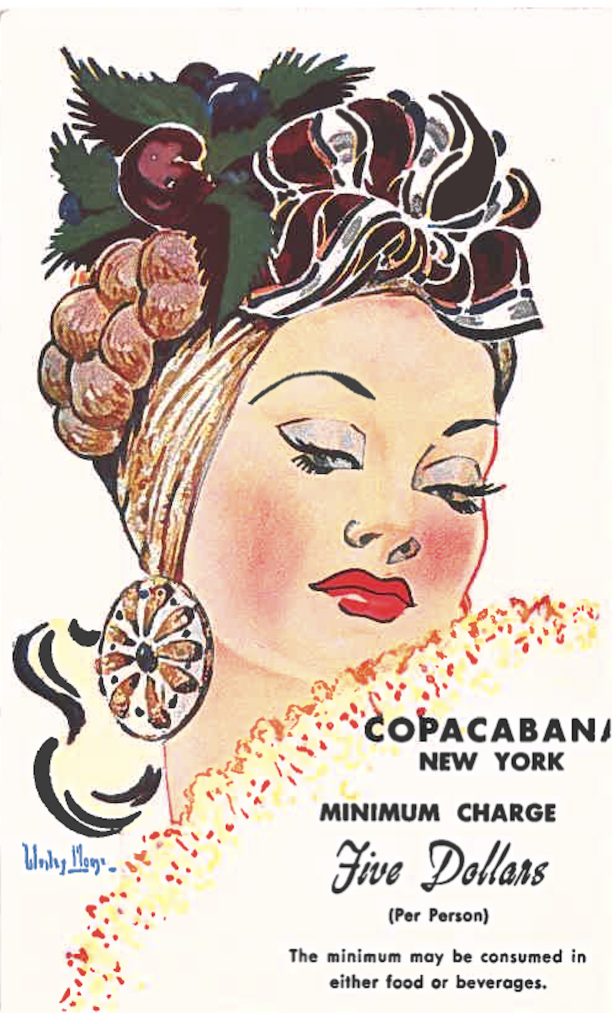 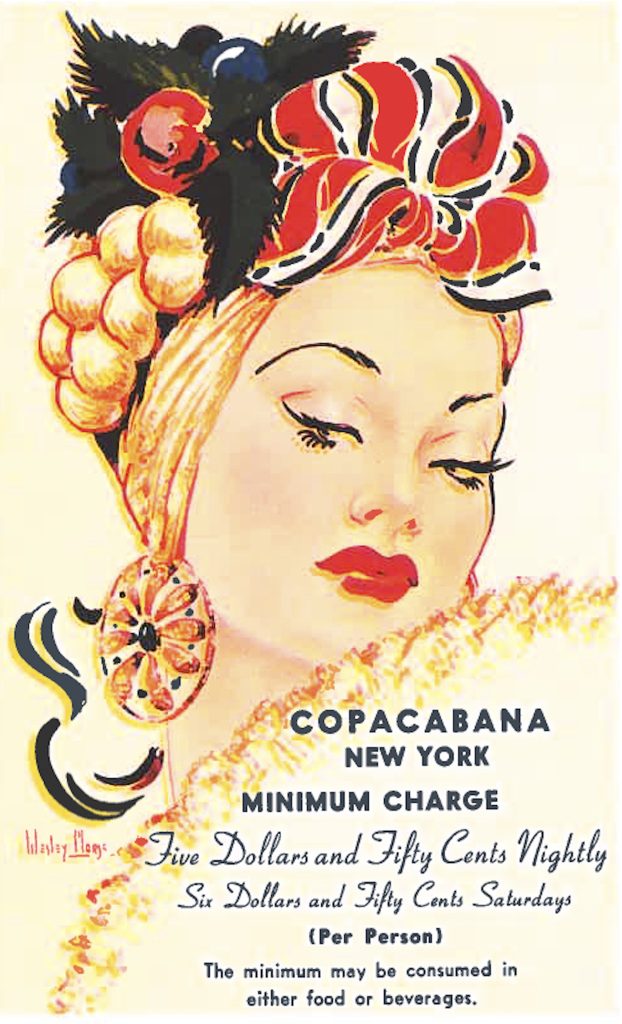 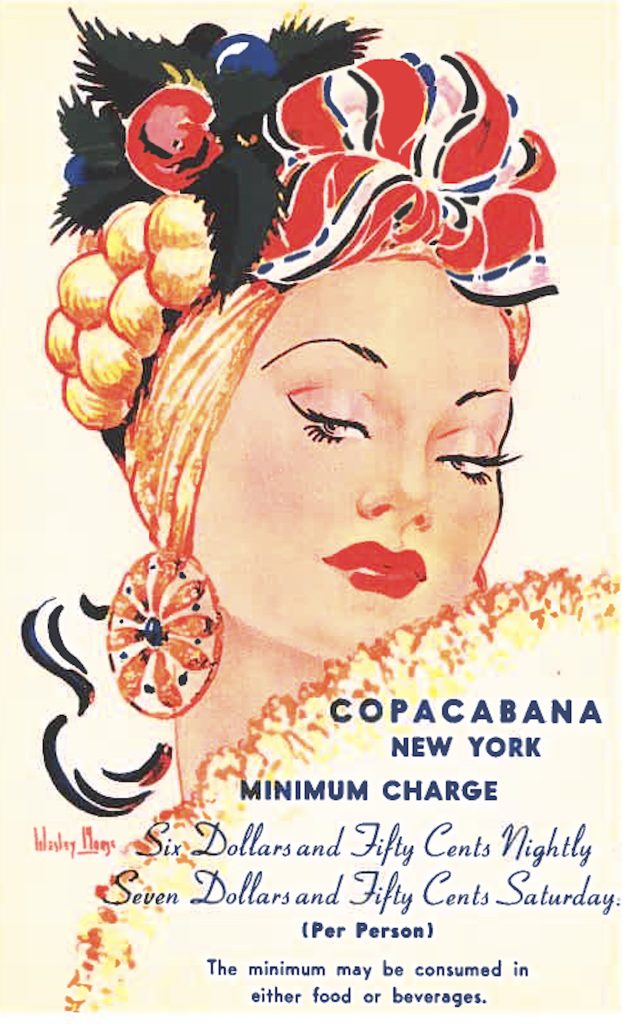 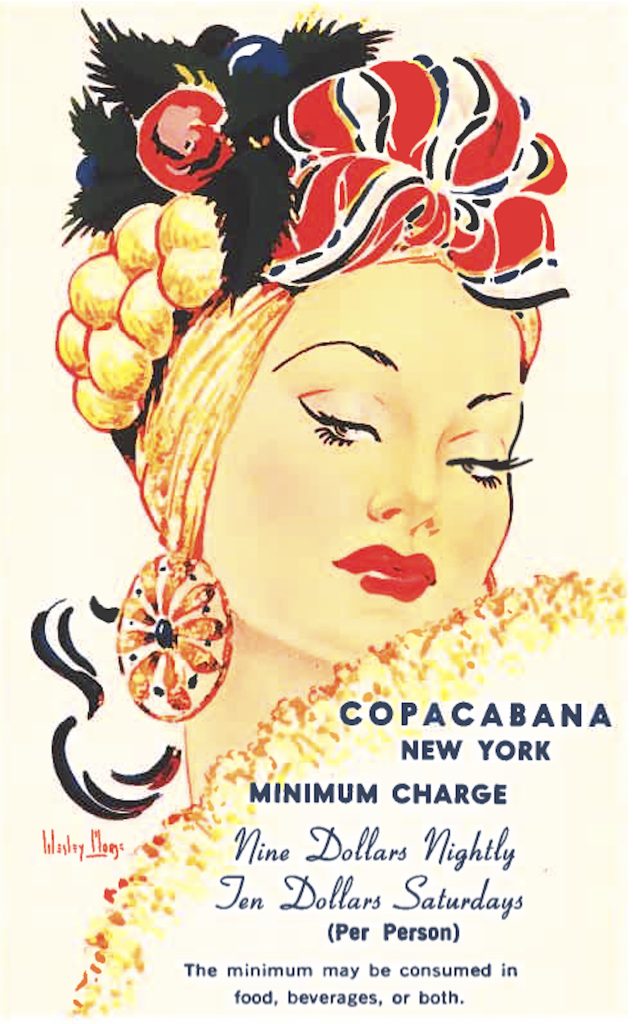 Prices at the Copa may have advanced at a faster rate than those at the LQ. Barbara Walters notes that her father’s nightclub tried to keep the minimum at $2 and an average dinner tab of $8 for shrimp cocktail, salad, steak, and dessert. That was clearly economical, as Lou wanted to position his club but very difficult to maintain after the 1960s.

Strangely, the food was not the primary draw at the Copa. The setting and the vibe were Brazilian, but the music was Latin, following the then popular Mambo Craze and the food was Chinese.

In 1948 Jules Podell was made titular head of the operation despite investigations for racketeering. After an assassination attempt in 1957, Frank Costello decided to retire from the nightclub business, yielding to Mafia Capo Vito Genovese who ran quite a few additional nightclubs around New York. Several years later, Mafia Boss Joey Gallo, supposed owner of the Copa at that time, was killed at Umberto’s Clam House in Little Italy at a birthday party for him that had started that day at the nightclub. The details behind his murder have yet to be conclusively determined.

The bad-boy image of the ‘40s and ‘50s Copa still had some life to it when singer-songwriter Barry Manilow in 1978 wrote a hit song that was turned into a Broadway show, TV musical, and movie – all titled “Copacabana.” The legend still had life, that story about “the hottest spot north of Havana.”

Hy Mariampolski holds a Ph.D. from Purdue and spent his career in international marketing and market research. Nowadays, living in East Hampton, New York, he collects, trades, sells and writes about postcards. Hy has also been teaching a Zoom course on New York history through postcards called “Wish You Were Here” for CL&L, an adult education affiliate of Marymount Manhattan College.
PrevPreviousTwo from the President’s Cabinet – 1933 to 1945
NextWho’s Buried in Grant’s Tomb?Next
3 Comments
Oldest
Newest Most Voted
Inline Feedbacks
View all comments
Jim Sens

A most excellent article. Over 60 years ago at age 17 my older brother Bernie took me to the Latin Quarter… As I remember we had a great time although his wife was not too happy since we did not take her.

After seeing her picture and subsequently Googling her, I was surprised to learn that Arlene Dahl had just died last November at the age of 96.

Wonderful article, loved the graphics.
Such glamorous times and people, missing them greatly!