On March 10, 1864, when President Abraham Lincoln officially named Ulysses S. Grant to take charge of the entire Union Army against the Confederate military of Robert E. Lee, he had hopes that the choice would end the string of ineffective leaders of his forces and produce a Union victory. When Lee and Grant met at Appomattox Court House to end the war less than 13 months later, on April 9, 1865, Grant stood at the apex of a military career with huge public popularity. 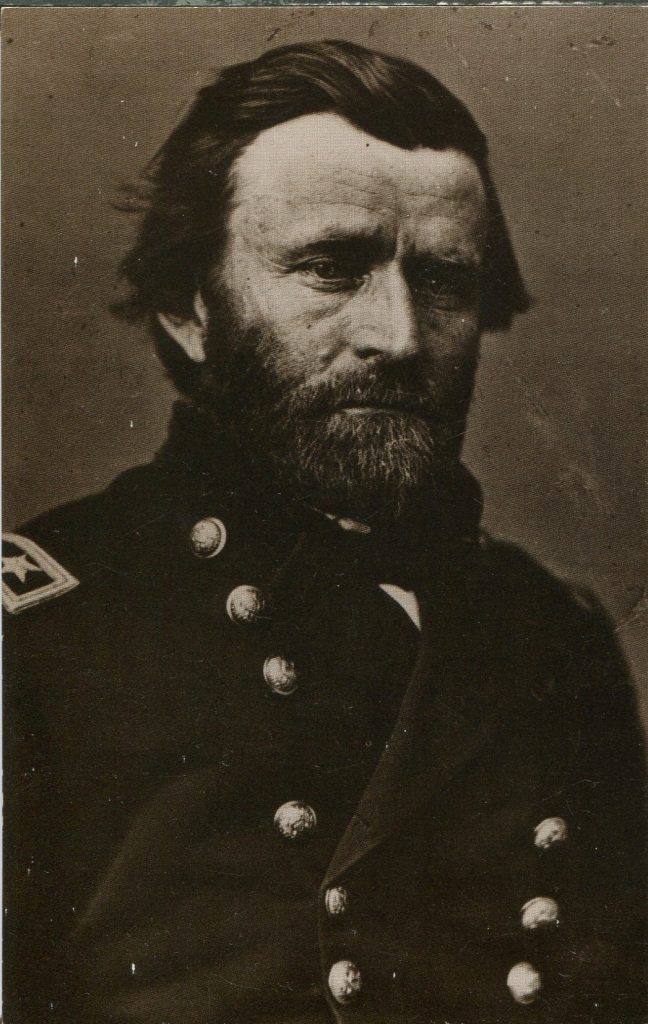 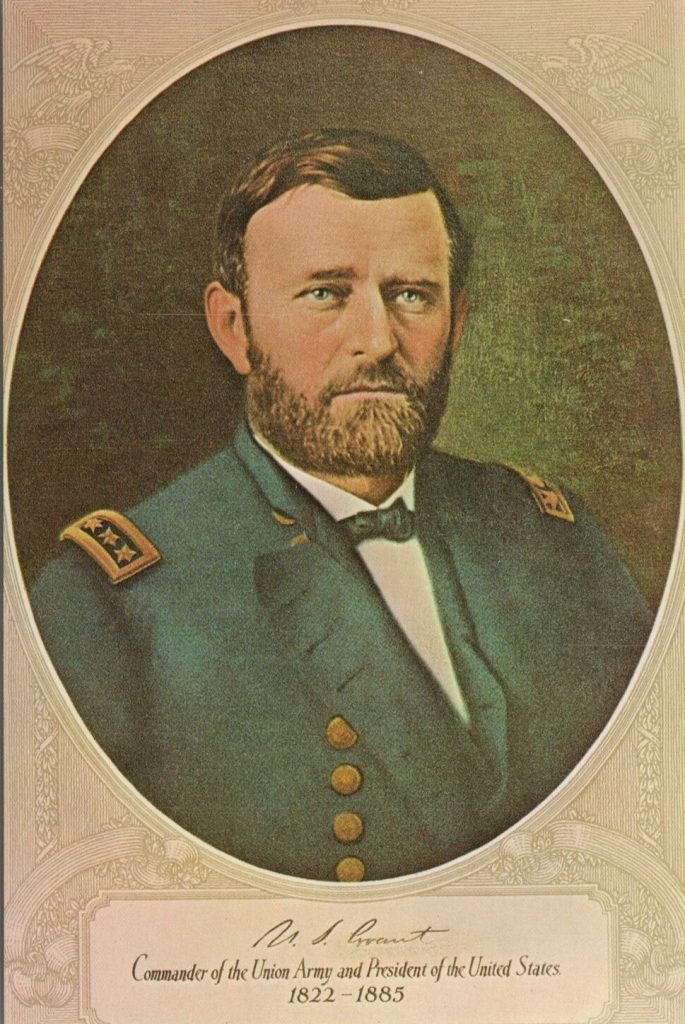 Grant was nominated for President by the Republican Party in 1868, having served in a variety of military positions under Andrew Johnson, Lincoln’s successor. His popular vote was substantial and his electoral college vote was overwhelming. He won 26 of the 34 states then in the Union.

Grant served two terms as President (1869-1877) and left office with considerable public approval, but a reputation tainted by scandals among his appointees. He and his wife embarked on a long trip around the world from May 1877 to September 1879.

Mismanagement of his investments left Grant essentially broke and living in a house on East 66th Street in New York City that was provided by a friend. He was saved from bankruptcy by a contract with his friend Mark Twain to write a memoir, which he finished only days before his death on July 23, 1885. The memoir was wildly successful and the royalties from it ensured that Mrs. Grant would have sufficient income to live well for the rest of her life.

A funeral service was held at the cottage in the small upstate New York town of Mount McGregor near Saratoga, where Grant had spent his last days finishing his memoir. The casket containing his body travelled by rail to Albany and then to New York City.

A vast funeral procession took place on August 8, with a route from City Hall north on Broadway to a new park then being developed along the Hudson River (Riverside Park). Contemporary estimates show over 60,000 marchers and over 1.5 million spectators who lined the streets. Pallbearers included generals from both the Union and Confederate armies while dignitaries included President Grover Cleveland, the two surviving ex-Presidents, the entire Supreme Court, all the members of Cleveland’s cabinet.

It had been widely speculated that Grant would be buried at West Point, from which he graduated in 1843. However, Grant made it clear that he wanted his wife buried beside him and West Point had a policy of not burying women in its cemetery. Mrs. Grant accepted an offer from the Mayor of New York City for a large tomb, so Grant’s body was placed in a temporary structure, an arched vault constructed of red brick that had been constructed on land just behind where a permanent tomb was envisioned to be built. A 24-hour military guard was assigned for security.

Initially it seemed that the public would support the construction of the tomb with donations and the Grant Monument Association was formed just days after Grant’s death. Former President Chester Alan Arthur was its president. However, fundraising lagged as there was no design available to show perspective donors what they were giving money to. The Association held a competition in 1888 for the design but rejected all submissions. A second competition in 1890 resulted in the selection of a design by John H. Duncan. 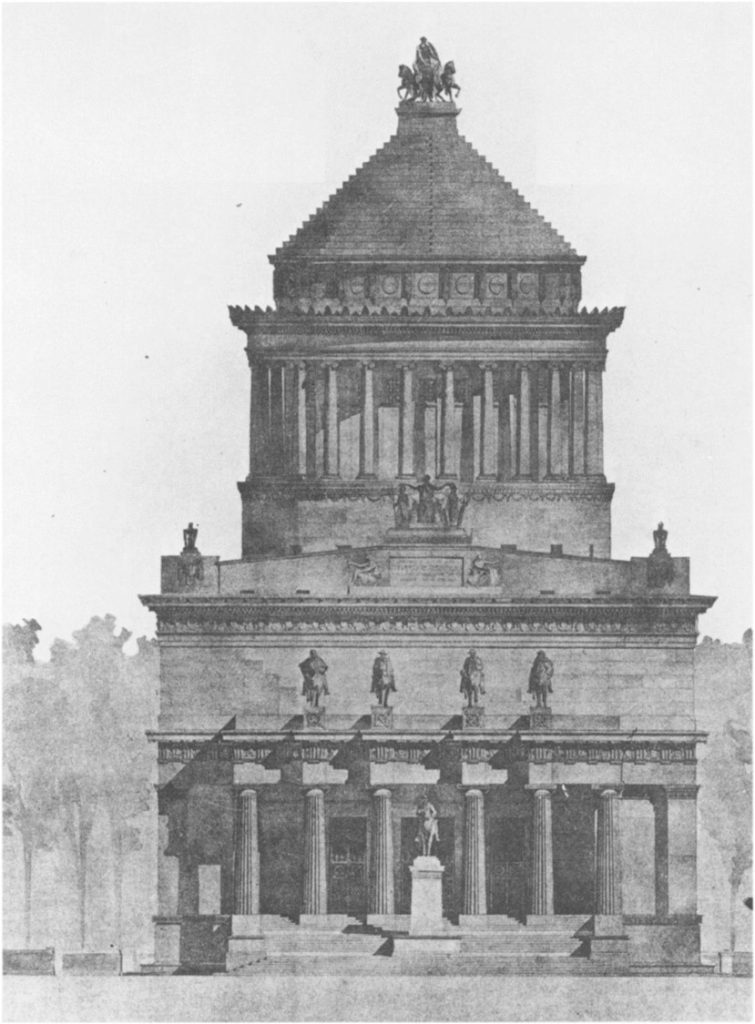 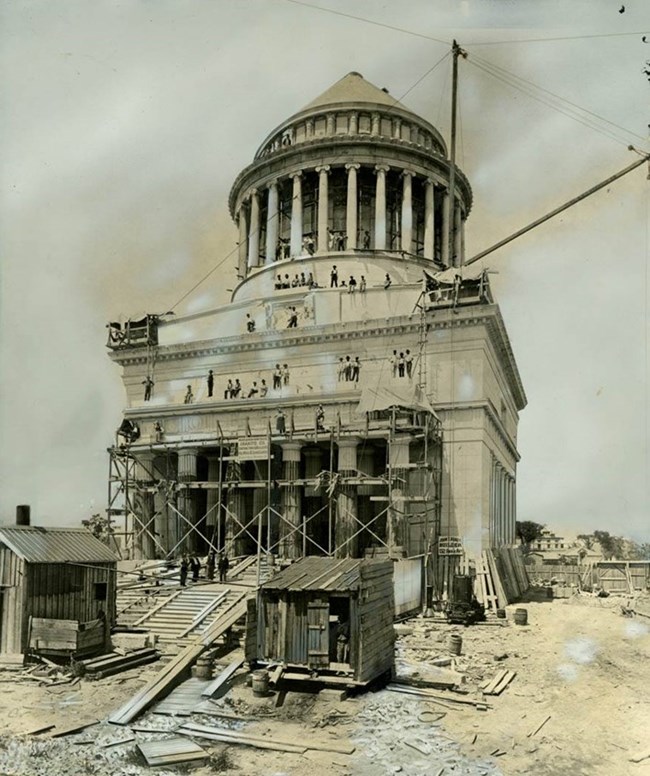 Duncan’s design called for an exterior of unblemished white stone. Construction began in April 1891 and finished in April 1897 at a cost of $600,000, all of which came from donations, many from overseas. Julia Grant died in 1902 and was interred in the adjacent sarcophagus that had been created for her.

The completion in 1910 of construction and landscaping of Riverside Park’s northern end (where the tomb is) increased public attendance at the tomb, but admission was greater than that of the Statue of Liberty through the end of World War I.

The tomb’s location at a high spot along the Hudson subjected it to weathering which led to several proposals to update the tomb driven by factors of popularity and public taste. A 1938 – 1939 Federal Works Progress Administration (WPA) project added busts of Grant’s most notable lieutenants to the crypt, installed several murals of Grant’s battles, and modified the stone plaza and the landscaping.

Still, the tomb remained under the control of the Grant Monument Association. By the 1950s its leadership was aging, and paid membership had fallen off. The GMA turned over the site to the National Park Service, which re-named it the General Grant National Memorial.

The 1960s and 1970s were hard times for New York City and the Grant Memorial felt the effects. The National Park Service had no plan and little staff for the Memorial. Vandalism became rampant and the area was the site of drug dealing, prostitution, and graffiti.

A Columbia University student had been volunteering with the NPS and was appalled at the condition of the Memorial. Frank Scatturo badgered the National Park Service and was met with indifference and hostility to the point where, in 1993, he wrote a scathing report on the monument’s condition and released it to Congress, local politicians, the President, and the press.

The resulting uproar ultimately led the NPS to budget $1.8 million for interior and exterior restoration and increased security. By 1997, the centennial of the tomb’s dedication, the restoration was complete — even the murals, which had been painted over, were revealed.

It took until 2011 for additional improvements such as a visitors’ center with public restrooms and a gift shop that was added across the street.

Now the question of who is buried in Grant’s Tomb needs to be answered.

It is all Groucho Marx’s fault, because he hosted a radio and later a television quiz show called You Bet Your Life. On the show, contestants vied for cash prizes by correctly answering some difficult questions. But if a contestant did poorly, Groucho would provide a consolation question that could be answered easily, and the contestant would walk away with something. One recurring question was “Who’s buried in Grant’s Tomb?”

The correct answer was “nobody,” since the Grants are interred in stone sarcophagi above ground (that is, not in the ground). Groucho, however, was lenient, to the point where he would sometimes coach the contestants, but he also accepted “Grant” or some variation. 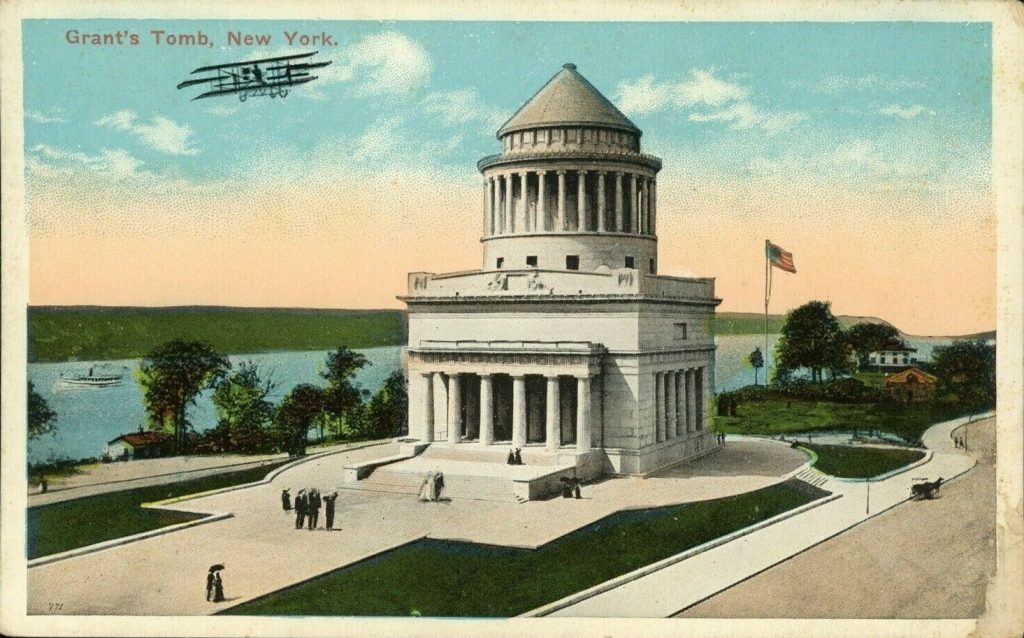 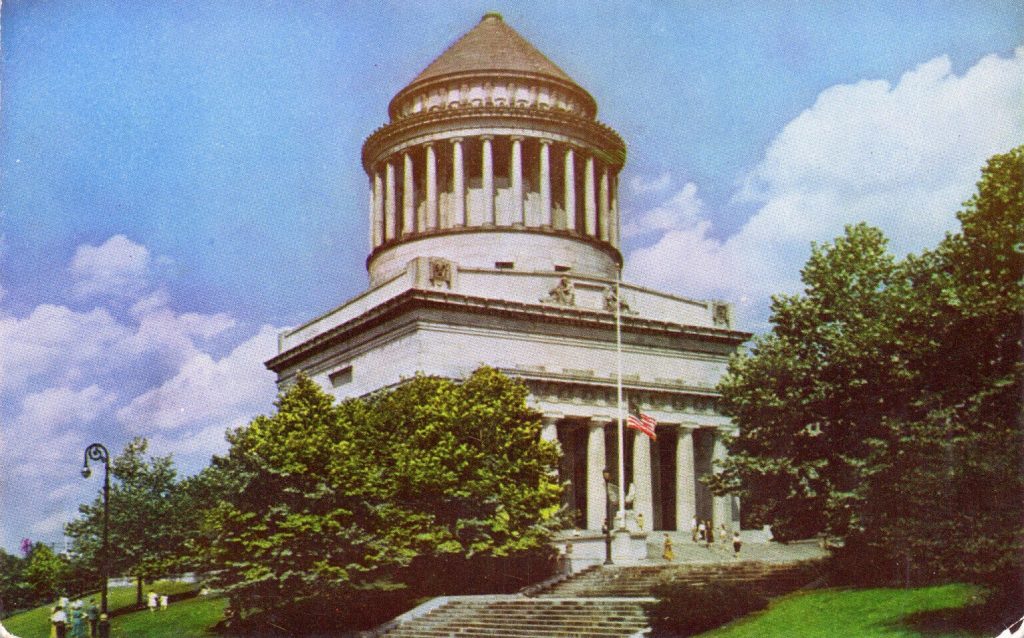 Bill Burton began collecting Ossining, New York postcards when he lived in that Hudson Valley town. His collection expanded, of course, to include his college, the neighboring towns, and places where he and his wife traveled. In retirement, he's refocused on Delaware and the DelMarVa peninsula towns, but he’s just as likely to be found parked in front of the 25¢ boxes at shows.
PrevPreviousThe Copacabana vs. the Latin Quarter
NextShell Service Ahead postcards – by William SteigNext
15 Comments
Oldest
Newest Most Voted
Inline Feedbacks
View all comments
Joe Hohmann

Very interesting! Thank you. Hopefully Bill will share postcards of some of the DelMarVa towns, especially where we have a beach cottage, in Lewes, Delaware.

I look forward to visiting on my next trip to NYC. Thanks for a great article.

I visited Grant’s Tomb during a family trip to New York when I was in elementary school. One thing I remember was reading the word “Yokohama”, which was (I just learned) a reference to a round-the-world trip the Grants began just a few months after Ulysses had been succeeded in office by Grover Cleveland. The couple sailed from Yokohama in 1879, over two years into the journey.

I love this story! Someday I will need to make a trip and actually see it.

Very Interesting. hope to have a postcard from this location.

Very interesting. I hope I can see it some day, meanwhile I need that postcard.

Great article! I always enjoy learning the history behind the postcards! You do a great job at giving just the right amount of information to keep one interested in reading and wanting to learn the information and yet somehow make postcards come to life so we want to travel to the location in the postcard. Thanks for sharing

Good to know about American history

May I know where is grant and his wife buried?

Wow! Such a detailed history, and of course, love how postcards were woven into the story. Excellent.

Very interesting. A great job doing this. Thank you

Great, I collect Grant postcards (linen & pre linen) because we were both born on April 27th. Grant just turned 200. I also lived in Ossining.

Thanks for sharing this!