Postcard History appears in many forms. Because of its nature, a postcard arrives in your mailbox often without notice. It brings greetings and news from afar in a joyous and upbeat fashion. Postcards often make us laugh, some make us cry, and there are others that leave us unmoved, distressed, or even anguished.

From 1901 to 1912, L’Assiette au Beurre was a profusely illustrated satirical French weekly magazine with anarchist leanings. Its editorial and cartoon content was drawn from a varied list of contributors and artists with diverse backgrounds and dissimilar styles. Few names from the staff are known today except André Dahl and Octave Mirbeau. However, one of the now forgotten, Gustave-Henri Jossot, for no good reason should be examined for his role in postcard history.

Jossot was proud of his work as a caricature artist and book illustrator. His work first appeared in Paris around 1895. He also worked as a painter and printmaker.

Born in Dijon in 1866, he studied in Paris with Eugène Carrière and Jean-Paul Laurens. His ability as a quick study with a caustic wit willing to attack the establishment and the bourgeoisie, caught the attention of the establishment journals, especially L’Assiette au Beurre, Le Plume, and Le Rire.

Near the end of 1910 the political climate in Paris became, at least for Jossot, unbearable. He resettled in Tunisia the following year. After his move to North Africa, he converted to Islam in 1913 and changed his name to Abdul Karim. After the Great War Jossot chose to travel extensively. He paid extended visits to Brittany, Corsica, Switzerland, and other parts of North Africa. Through the 1930s and ‘40s he continued to paint and draw and showed his works in the Salon Tunisien. During his remaining years he practiced the Islamic faith and died in 1951 in Sidi Bou Said, Tunisia.

This featured set of postcards entitled Dressage drawn by Jossot in 1902 will foster only the dispassionate emotions of its viewers. This art was first used as illustrations accompanying commentary published by the artist.

The word dressage in French is frequently translated to the English phrase “Lessons of Life.” One such lesson of life as seen by Jossot is that we have little or no control over our lives because of regulations imposed by our parents, doctors, priests, teachers, the military, the police, the media, the government and its laws, and too, more often than expected by people unknown to us.

In the decades from the gay ‘90s through the start of World War One, France was a country divided on several critical issues that ranged from revenge against the Germans over their conquest of Alsace-Lorraine in 1871, the church versus state question, the freedom of speech issue, and the development of radical political ideas and social customs. In summary it was a pick-your-issue and run amok with it to anyone who would listen.

L’Assiette au Beurre was an entity that would listen and in January 1904 Jossot’s Dressage series of cartoons was featured on the magazine’s cover. The first in the series is an illustration showing a frowning priest and a mustachioed military authority holding a young boy by the throat and arm.

There are sixteen cards in the set. Personally, I don’t like the illustrations, but I purchased the set, since at the time I had no examples of Jossot’s art in my collection. Truthfully though, these cards mesmerize me and demand my attention. They are much like television news – there is very little good to learn, but if you’re a news junkie, you simply can’t look away.

The cards are presented as an educational experience. There are times in our personal dressage that we must learn an unpleasantry. 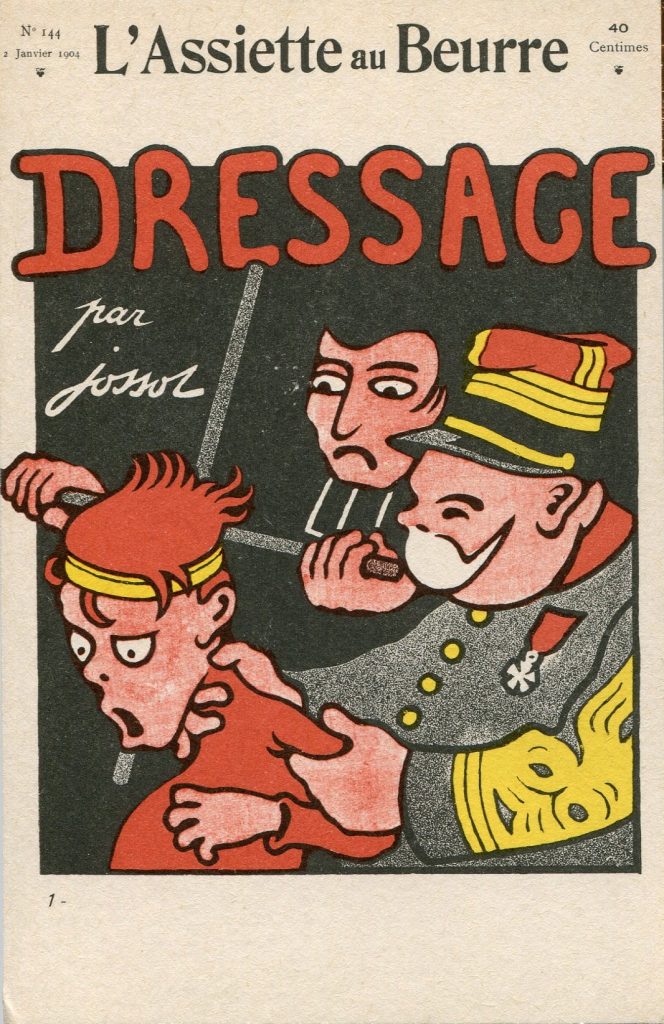 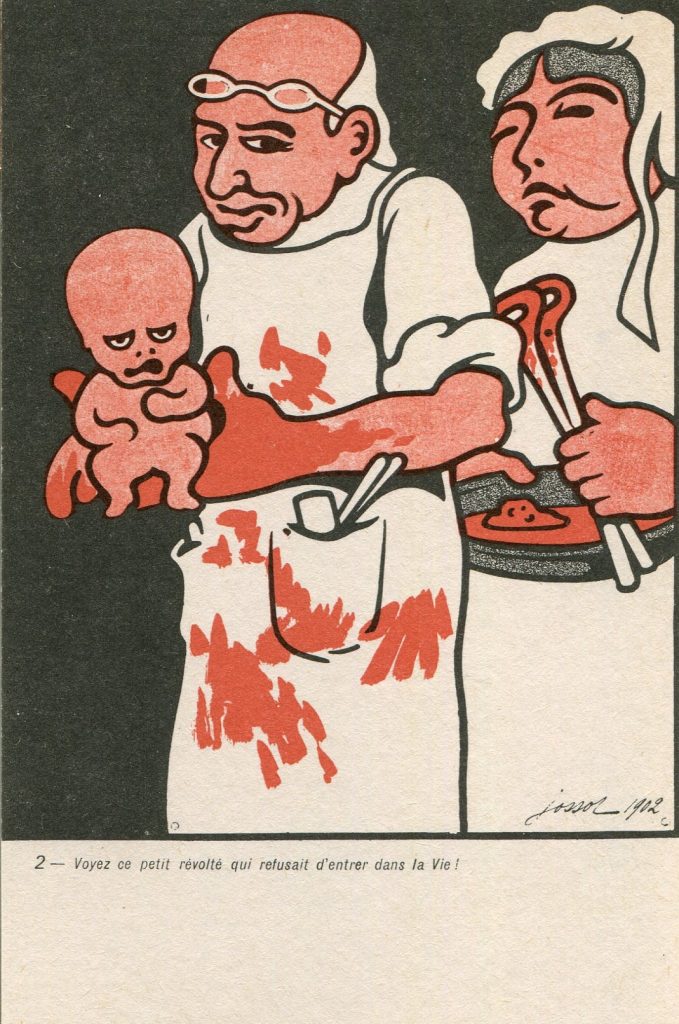 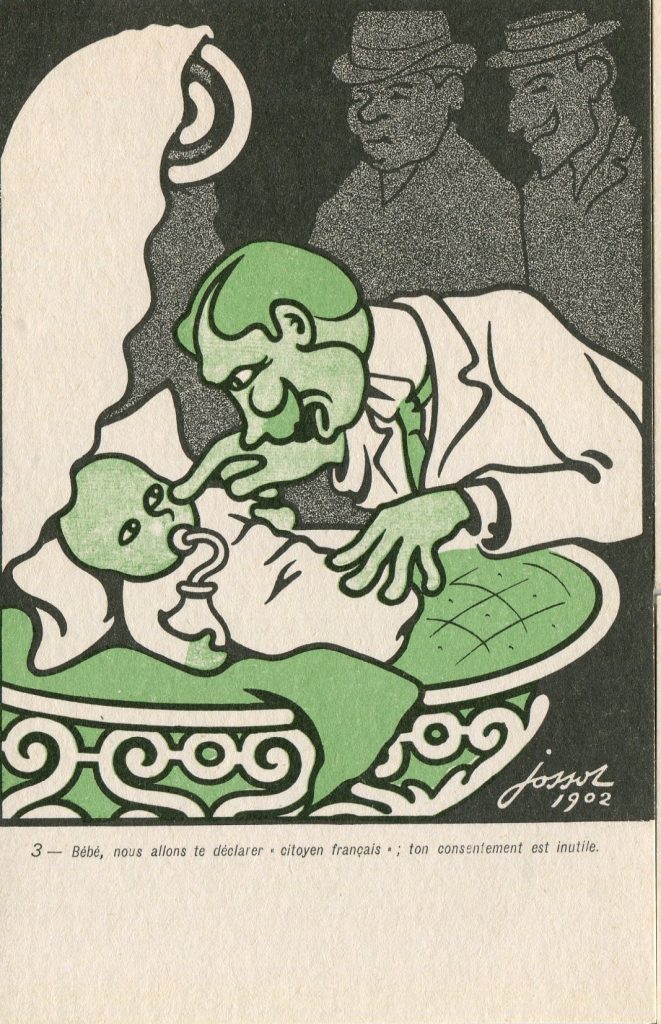 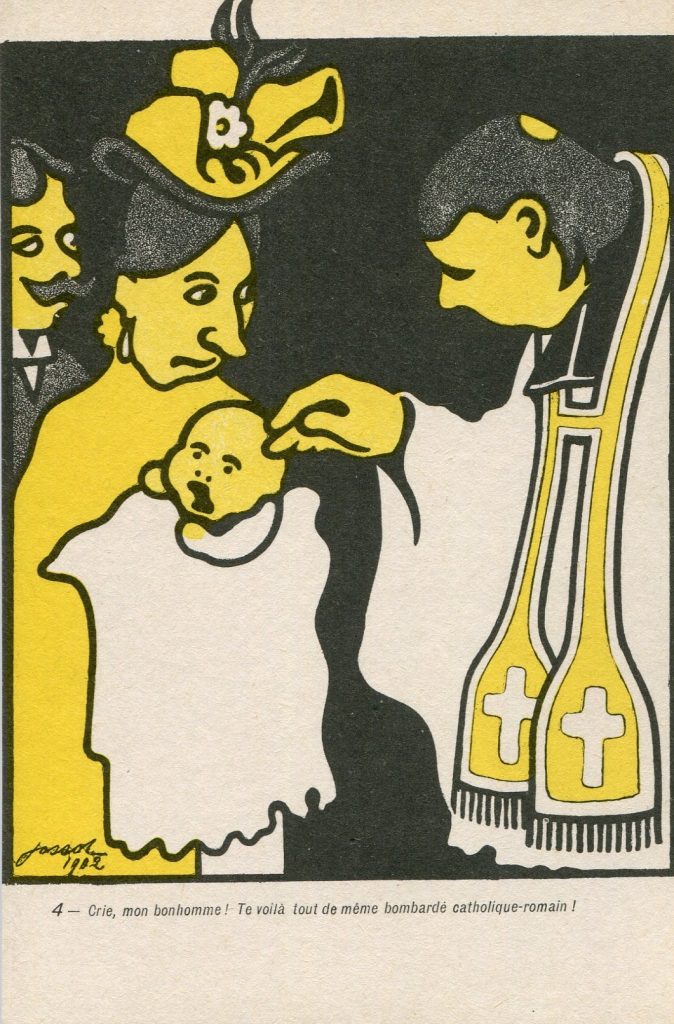 Look at this little rebel who refuses to enter this world.

We’re going to declare you a French citizen; your consent is unnecessary.

Cry, my good fellow! We’re Roman Catholic all the same. 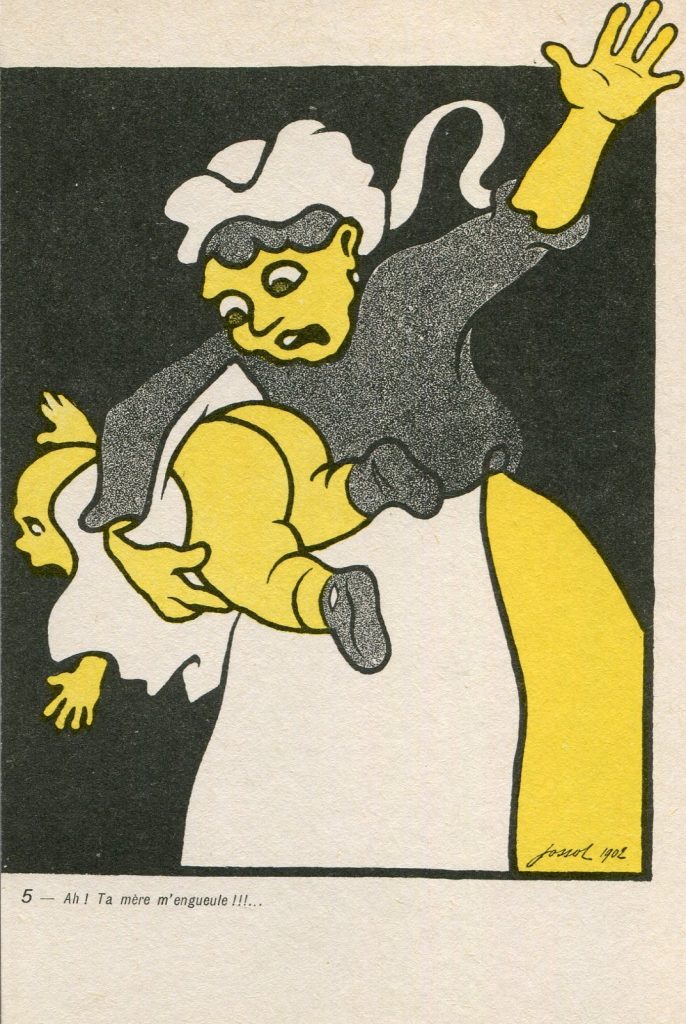 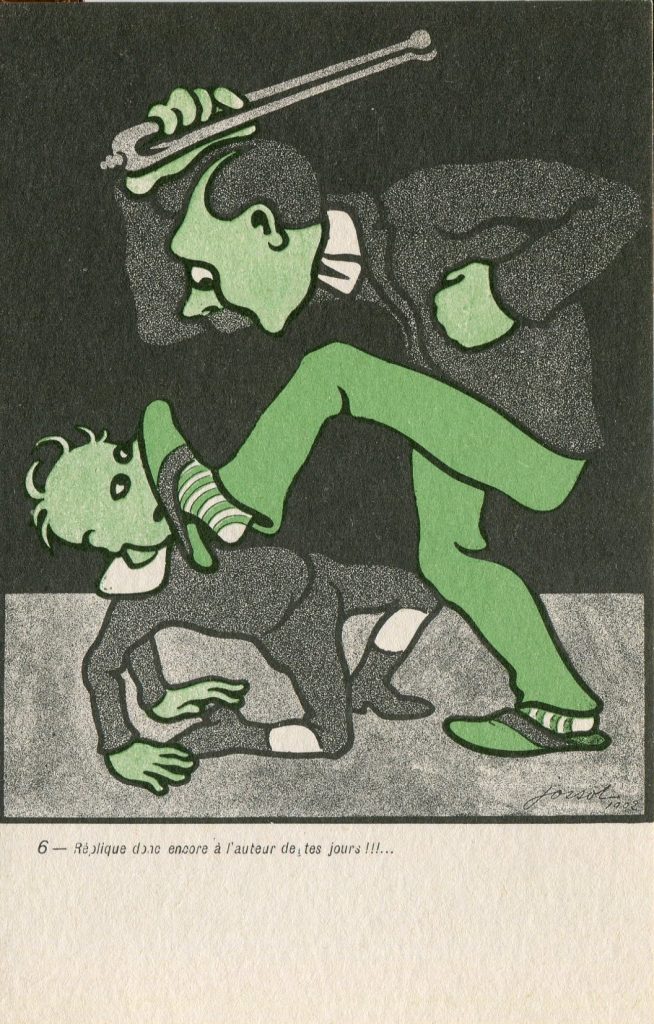 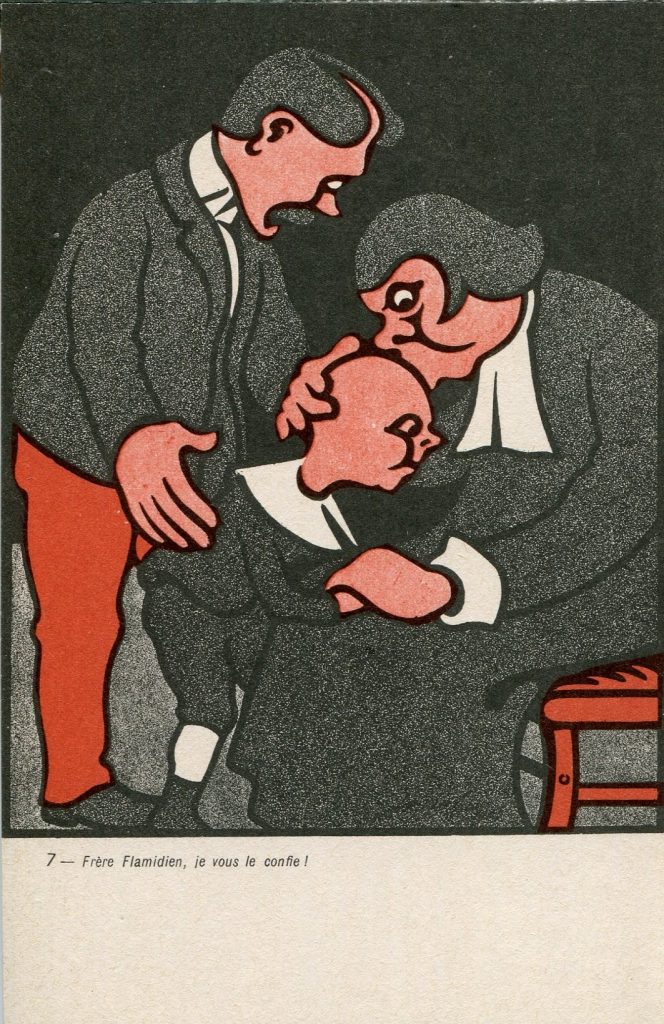 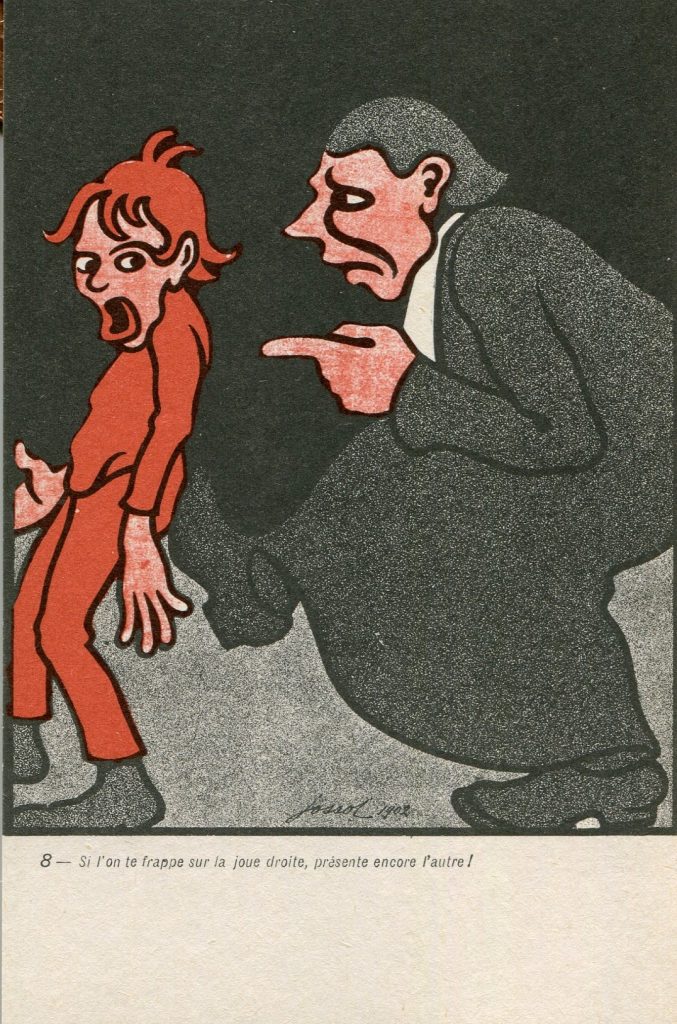 Oh, your mother scolds me.

Go ahead talk back to the author of your days!!!.

Brother Flamidian, I entrust him to you!

If someone hits you on the right cheek then, present the other. 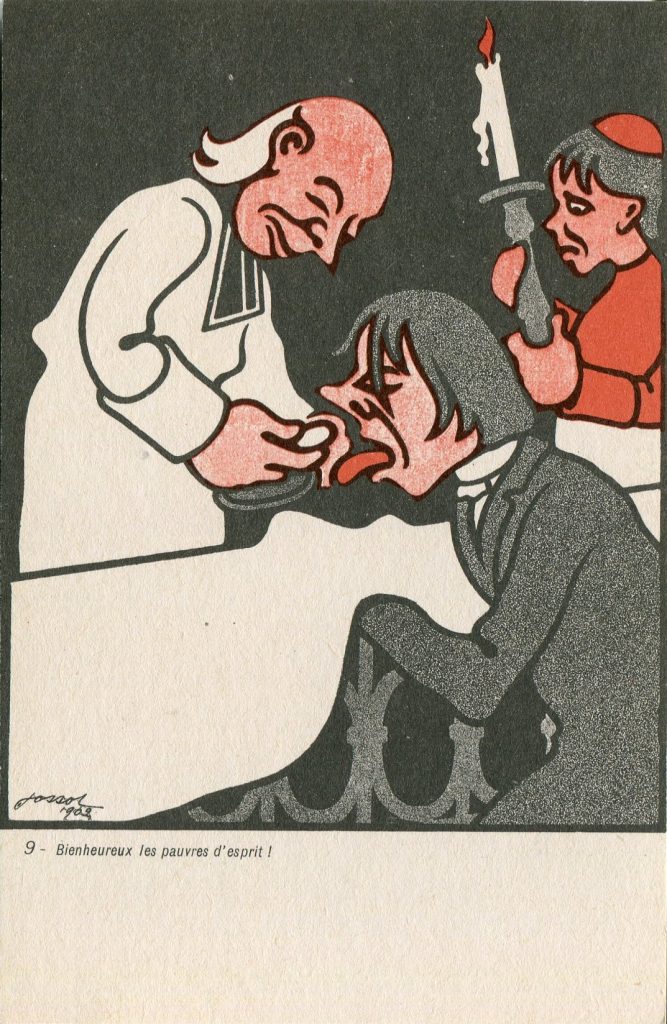 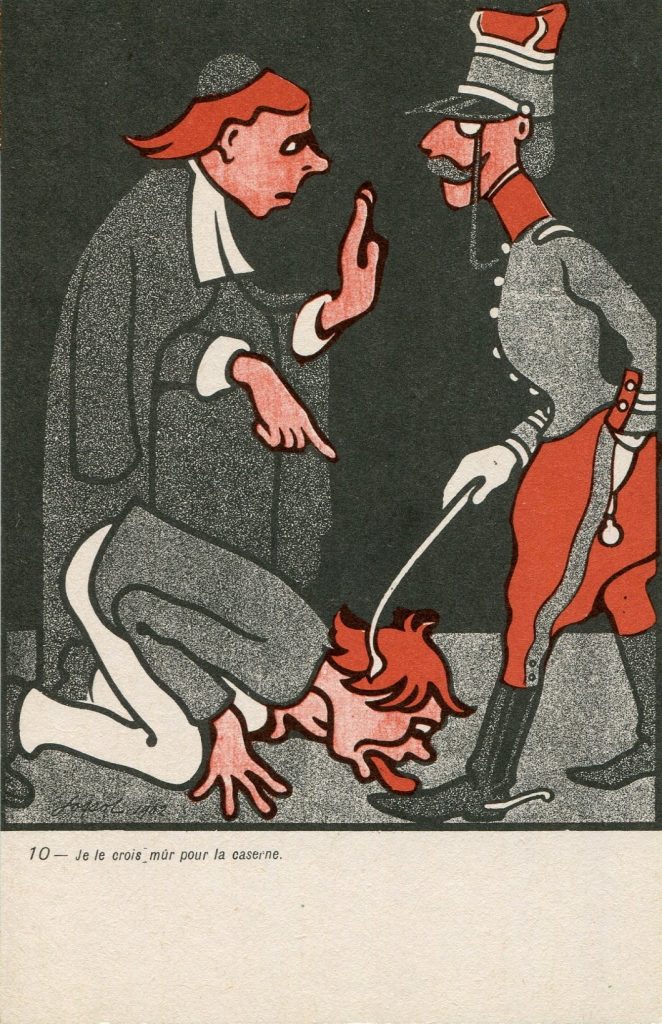 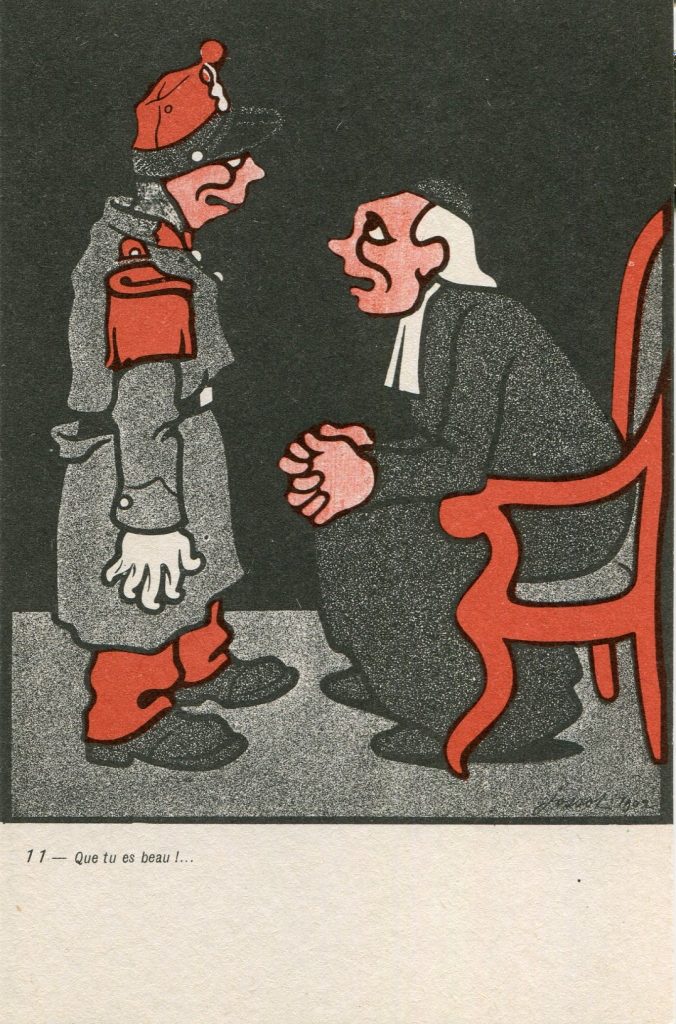 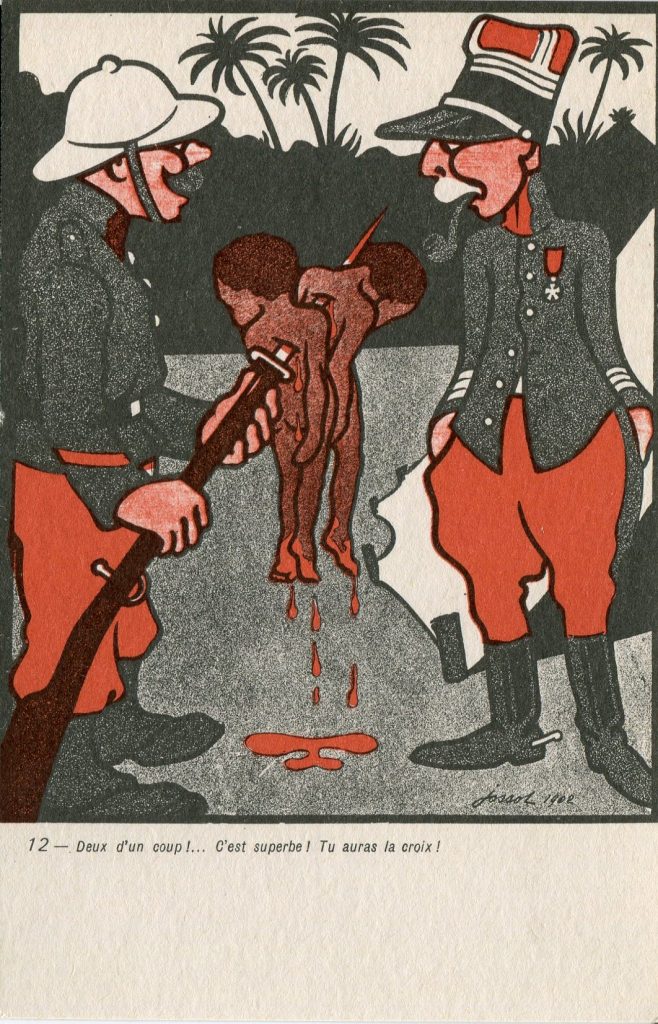 Blessed are the poor in spirit!

I consider him ripe for the barracks.

You are so handsome!

Two at once! Superb! You will have the cross. 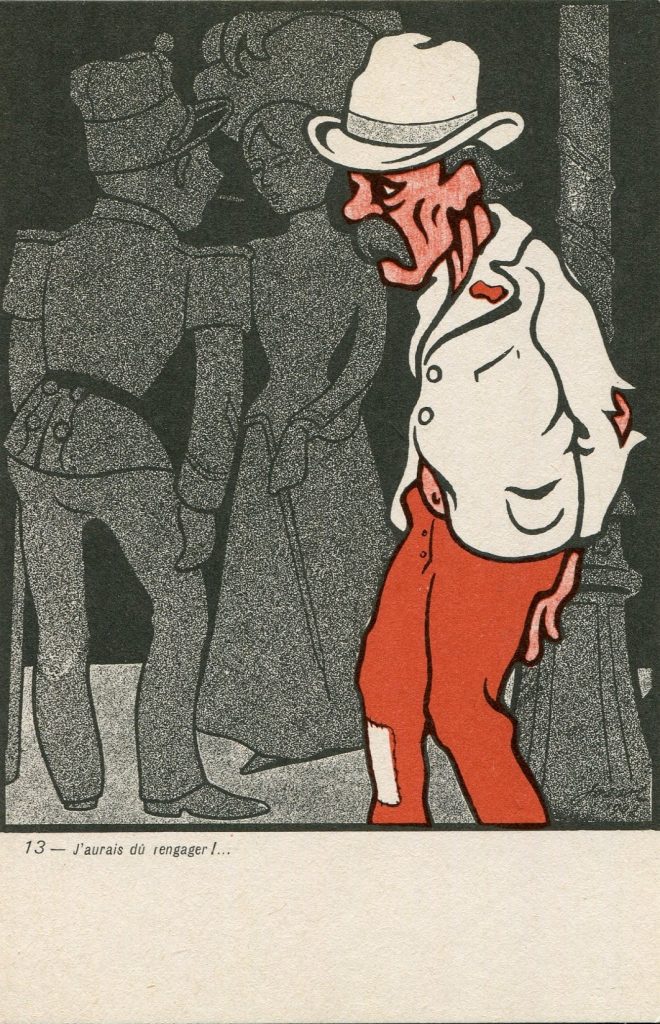 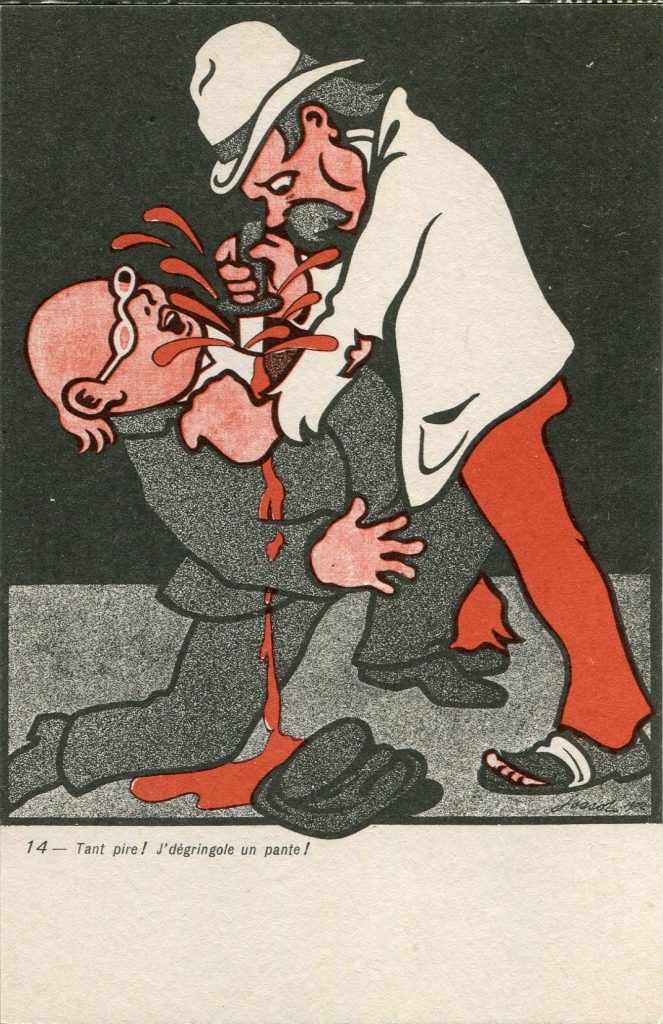 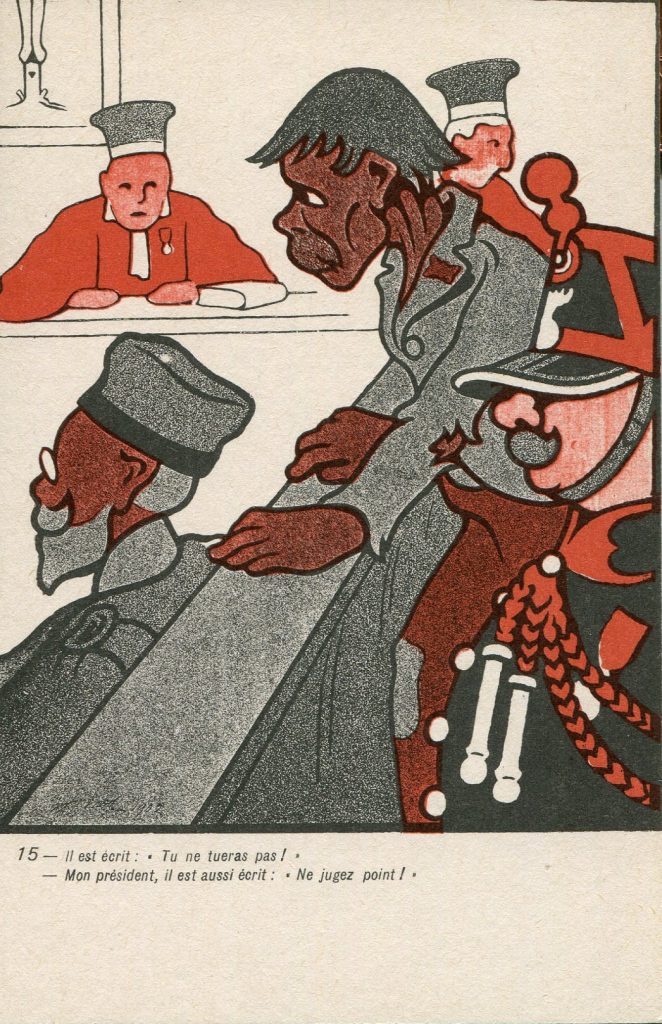 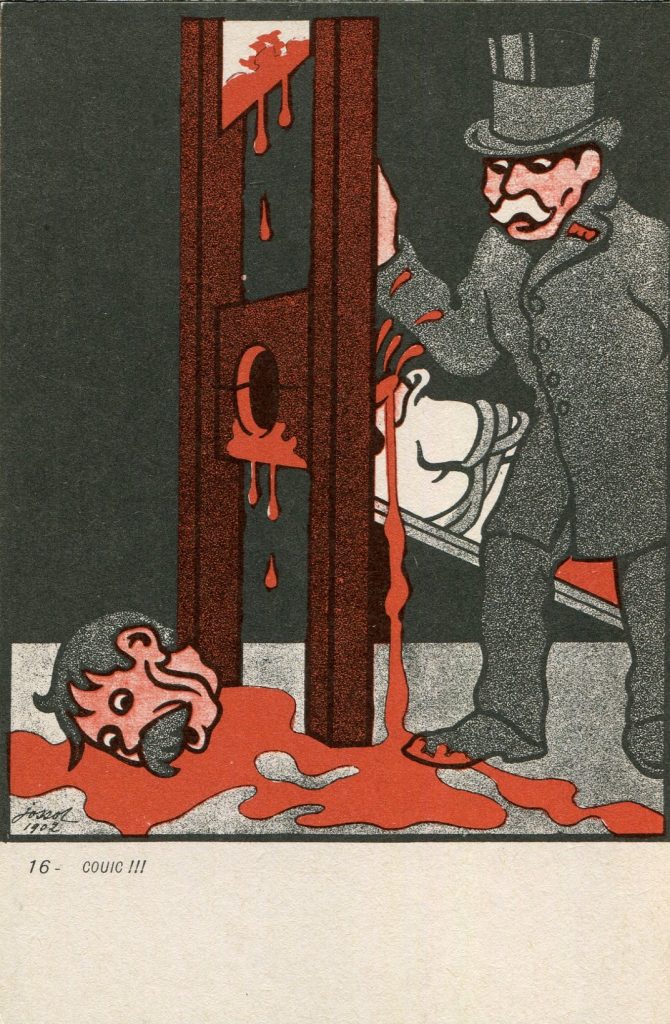 I should have reenlisted!

So much the worse! I tumble a (panty*) weakling!

It is written, you shall not kill.
Your honor, it is also written, don’t judge

* A pante (panty) at the time was a member of the bourgeoisie.

** The French word “couic” in a strict translation to English would be “squeak,” such as a weak shrill tone, much akin the noise made by mice and other rodents. However, in the world of “graphic novels,” (comic books) a squeak is the sound made by a person being strangled, or having his neck broken or his throat cut.

Time does not permit a thorough etymological search of the word “couic,” but it may very well be that the artist used it first as a graphic sound effect. Any takers on the topic?

May I ask? If you didn’t like the cards when you first saw them, do you like them any better now?

Ray Hahn is a retired educator, but he has never stopped teaching. His decades of researching, writing and editing a newsletter for the South Jersey Postcard Club has been a world-class education in trivia. In addition to postcard collecting, Ray’s other interests include history, genealogy, and touring the world with his wife Marie. Ray often advises his readers to "Join me as we explore the world one postcard at a time." Ray and Marie live in New Jersey.
PrevPreviousWatches for Sale
NextOscoda, Michigan and Tales of Wurtsmith Air Force BaseNext
6 Comments
Oldest
Newest Most Voted
Inline Feedbacks
View all comments
Susan Lane

Ray, you and I often land on the same cards but like any two collectors, we collect differently. I enjoy Jossot’s comic style in part because it is easily recognizable as unique, and so clever as not to need shading. To add to dressage I have a Danish set to show you on lessons of life.

If you are on a hunt for a less traumatic image by Jossot look for his character being fitted out by a tailor. It measures up as a fine example of his work.

Great cards! Great comment. Susan hit on it with Life Lessons. My thought is Bringing Up Baby. Dressage is a big pastime here in Sonoma County… training horses, not future citizens. No. 8’s caption would be more meaningful to us as …turn the other cheek. And No. 12 refers, I believe, to the croix de guerre military award. France had sooo many enthusiastic caricaturists who published on postcards during the Golden Age and plenty more up to very recently (and perhaps still). I traded for years with Jacques Lardie who created many acerbic and non-pc images for my goat collection.… Read more »

Gosh! When I first saw the title I thought it was about horses! The cards are unsettling.

I wish it had been horses only kind pictures not horrable ones.

Since some of Jossot’s characters remind me of The Simpsons, I wonder if his work is known to Matt Groening, the creator of that cartoon.

Wish I hadn’t looked at that evilness.