I am intrigued by animals with horns and antlers. I never wanted one for a pet and I certainly wouldn’t want to be too close to one, but they have fascinated me since I was quite young. My parents went to Niagara Falls for their honeymoon trip in 1954 and in 1964 they decided to go back for a return visit. I was looking forward to spending a week at my Grams’ and Pop-pop’s house, but Mother said I was going with them. Who was I to argue?

I remember the car we had; a jet-black 1964 Ford Galaxie 500. There was no reason to remember the route we took, but I remember that the trip was the long-way-around. That was what my dad called it; we went around one of the Great Lakes. We left home on a Monday morning, I think, long before sunrise. Thanks to mom’s careful planning I spent the first three hours sound asleep on the back seat. I don’t remember the name of the town, but about noontime we stopped for lunch at a roadside picnic table in northern Vermont. 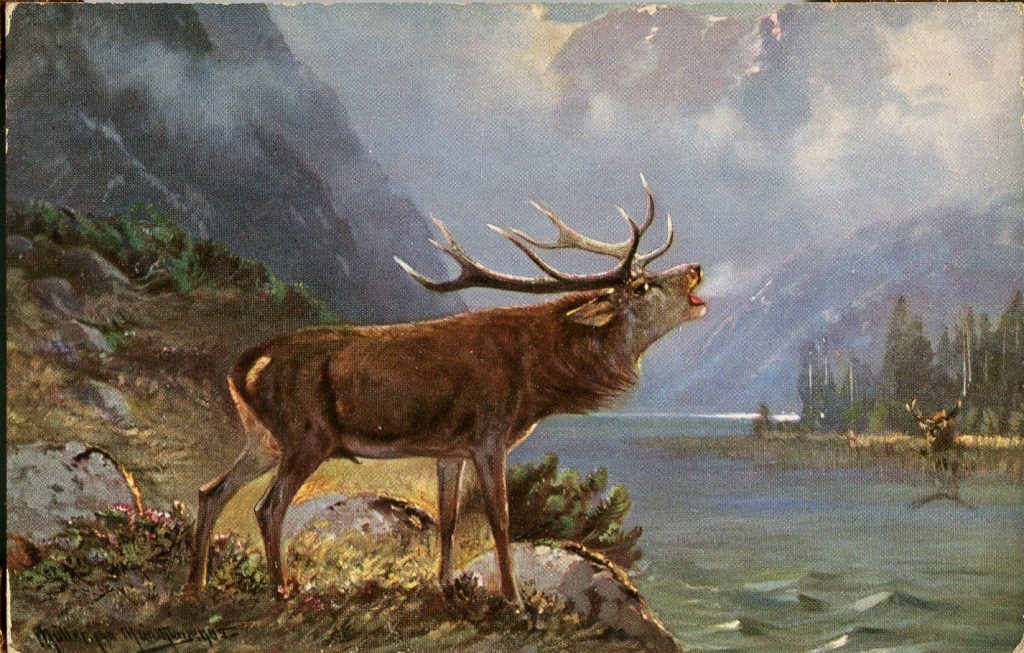 Reliving my first trip to Niagara Falls has happened twice in my life; once in 1984 and again in 2004. Seems like year-dates that end in “4” is a pattern. It may be safe to say the charm will be broken in 2024 because no matter what happens, it will never be as good as that day in Vermont that I saw my first moose.

That day is still vivid for me. The picnic area was along a small river. There were lots of tables but we were the only ones in the park.  Mom’s favorite lunch in those days was a peanutbutter and jelly sandwich with potato chips and lemonade. I was about to take the first bite of my sandwich when I looked out toward the river and there he was; just across the way, standing tall with his front feet in the water, and his antlers silhouetted against a bright blue sky.

We had an Encyclopedia Britannica at my house. My dad was a curious guy, he would sit with a volume of the encyclopedia on his lap and just turn pages. I suspect he did a lot of reading too, but one night after our Niagara adventure I asked dad if I could use his encyclopedia to learn about moose. He knew I was hooked, of course he said yes.

I learned about moose and other horned and antlered animals and probably told my friends everything I learned, but since it was the horns and antlers that fascinated me most, I started by learning the differences. At first I tried to remember the characteristics of the horns, i.e., straight, twisted, curved (up, back, or forward) but with little success, but then I came across the word “branched.” It was never clear to me before if an animal had horns or antlers until I learned that antlers have branches; horns do not.

Horns, in many ways resemble antlers, but horns are permanent boney growths found on sheep, goats, cattle, and antelopes. What they are in real-life is pretty scientific so here’s what the dictionary says, “A horn consists of a core of bone surrounded by layers of keratin that is in turn covered by keratinized epidermis.” Horns are permanent.

Antlers are much different. Antlers are extended growths from an animal’s skull. They are found in members of the deer family and the dictionary says, “Antlers are structures composed of bone, cartilage, skin, nerves, and blood vessels. They are generally found only on males, with the exception of reindeer and caribou. Antlers are shed each spring and regrow through summer.” Animals with antlers are caribous, moose, white- and black-tailed deer, mountain-, Manitoba-, Tule-, and Roosevelt-elk, and others, including reindeer and the wapiti.

At the first postcard show I attended in America (in Chicago in 2005), I walked around the room just to see if I could find trouble and I met trouble head-on. I found a dealer from Minnesota who had a tri-fold display board exhibiting animals. I stared at that board for ten to fifteen minutes and finally mustered enough courage to ask the price of that card while I pointed to the one in the middle of the top row.

Three dollars. I bought it.

I have lots more, but the four cards I am sending to Postcard History are some favorites.

OMG, their antics were outrageous, and I remember sitting on the floor in front of the TV laughing until my sides ached. Rocky and Bullwinkle aired twice a week at 5:30 p.m. on Tuesdays and Thursdays, right after American Bandstand. I had my dinner on the living room floor those nights, the rest of the week, I ate with my parents in the dining room. I read one time there were more than 160 episodes – I think I saw them all. 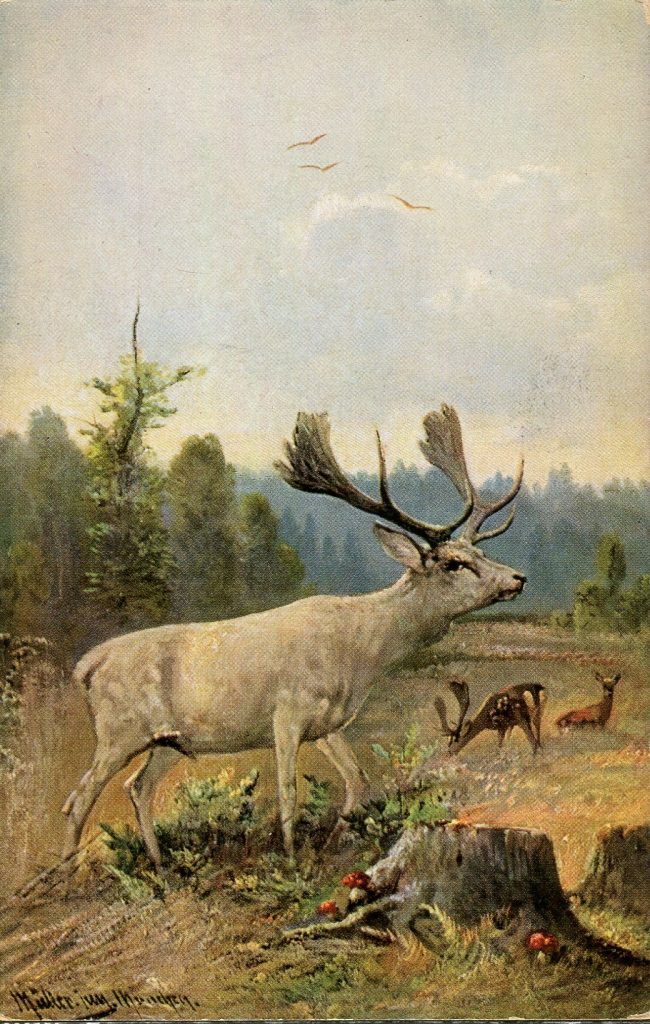 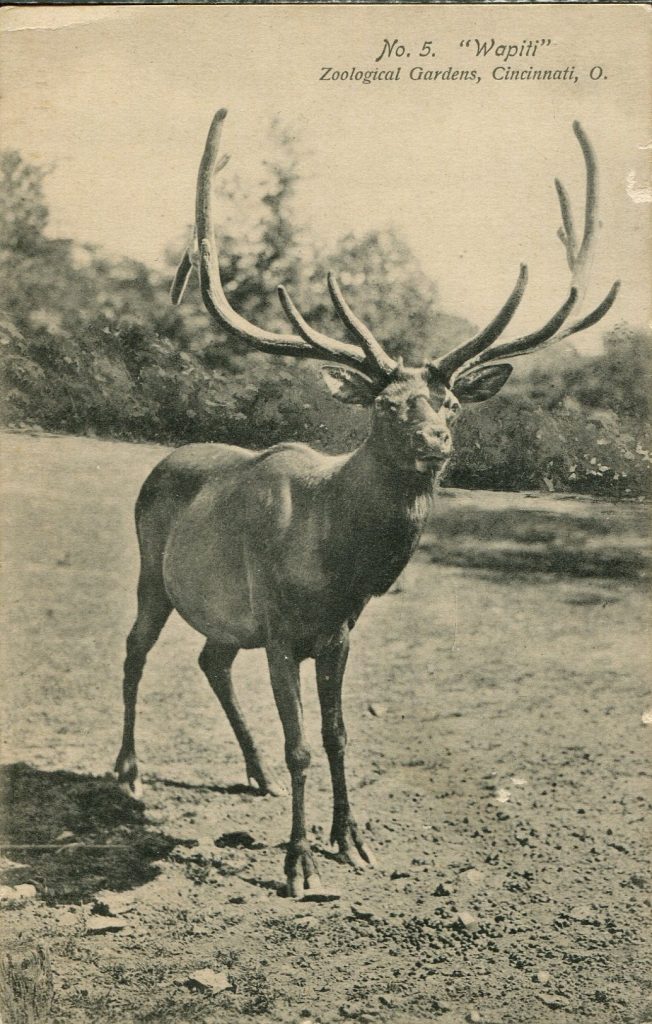 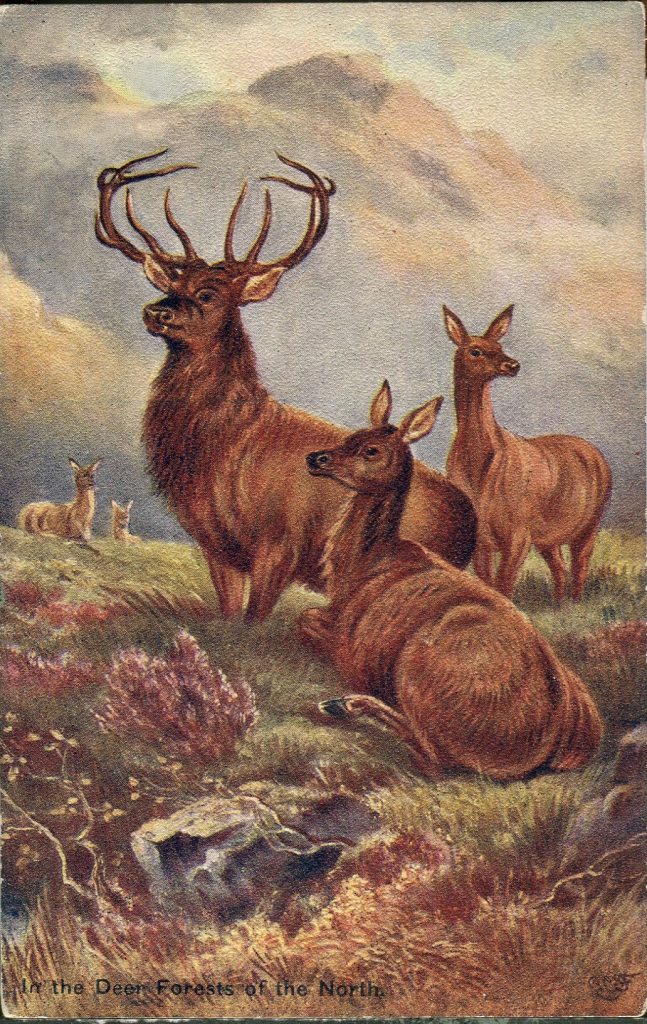 The red deer can be found on five continents: Europe, Asia, Africa (but only in the Atlas Mountains), North and South America. The red deer can claim the animal kingdom’s largest antlers – some have been found that weigh in at eleven pounds.

Kaya Fellcheck is a retired optometrist who planned a return to her girlhood home in Vermont. Caught in the virus lockdown, she now lives in Alberta, Canada. The good folks here adopted me; I may stay.
PrevPreviousOne-of-a-Kind Advertising Postcards
NextThe Town Musicians of BremenNext
5 Comments
Oldest
Newest Most Voted
Inline Feedbacks
View all comments
Bernie Smith

Hate to be the bad guy here,but,,that first card is not a moose.
They are very nice cards however.

I believe that first card is an elk actually.

Since I was born in Ohio, I’d love to have the wapiti card from the Cincinnati Zoo, which was the home of Martha, the last known passenger pigeon.

A fun read. Thanks for sharing some of your childhood memories. In south-central Kansas, we just had a lot of white-tailed deer. It was always fun to she them near the edges of grain fields.

Thank you for an interesting article. Out here in the Pacific Northwest, there is a story of the pioneer family with kids who found and adopted a orphaned baby moose and raised it until the father determined it was growing too big and too potentially dangerous.