I have collected advertising postcards for almost forty years. My restaurant and hotel postcards came much later – restaurants around 1995, hotels in 2002. I started collecting advertising in 1983. In September of that year, I started college in New York City. I hated the cafeteria, so thankfully my father was willing to continue my allowance. I received a check in the mail every Monday for $15; I spent it on groceries, an occasional meal at the automat, and other necessities.

On the first day in a class devoted to social history, our professor asked us to create three lists. He explained that this assignment would be a semester-long project. From memory – research was forbidden – we were to list products or services we used regularly (at least once per week). The second list was to be products and services we used but only seldomly (on an average of once every month or every other month). The third list was to be products or services we never used but knew about.

At first, I thought this would be a fun assignment. I had an inkling that it would in some way entail television advertisements and how viewers retained their messages. But, I was seriously concerned about not doing research. I simply did not want to rely on memory to create my three lists. I solved my problem in a unique way. I returned to my dormitory one day soon after that class and found a postcard on the floor by our mailboxes. The postcard advertised a 10% discount if you went down to the restaurant’s Bleeker Street location and spent more than $6 – drinks were not included.

My friend Alice and I went the next night. Pasta dishes were $2.00 to $2.50, if we both ordered pasta, sodas, and a tiramisu for dessert we would qualify for the discount. Our plan worked, the waiter deducted 65 cents from our tab and he let us keep the postcard for our next visit. That was my first advertising postcard.

I thought of it at dinner that night. If I collect postcards about products and services, that wouldn’t be research, so I wasn’t breaking the rule. Naturally one thing led to another, and I started collecting every advertising postcard – old or new – that I could find. Sadly I never got to use my postcards to make my lists. That was the year my mother passed, and I left school six weeks before the semester ended.

My postcards have been a never-ending source of joy. I don’t remember the details now the way I did years ago, but I can still remember when I found most cards and how much I paid for them. How much I paid is no longer important to me, but the memories of finding the card and the people I met or talked to are very precious.

Andrew is my eldest grandson. He is 26. He came to visit the other night and found me going through my album of cards that I call “only ones.” As most collectors, I keep my sets together, but I keep cards that advertise a product, and it is the only one I have on that product, separately. Andrew was charmed by the whole idea of collecting postcards. He never knew that his grandmother was a collector before that night.

Naturally, Andrew asked which ones were my favorites. I picked out five and wrote this story in hopes that maybe other collectors who read Postcard History would enjoy seeing them too. 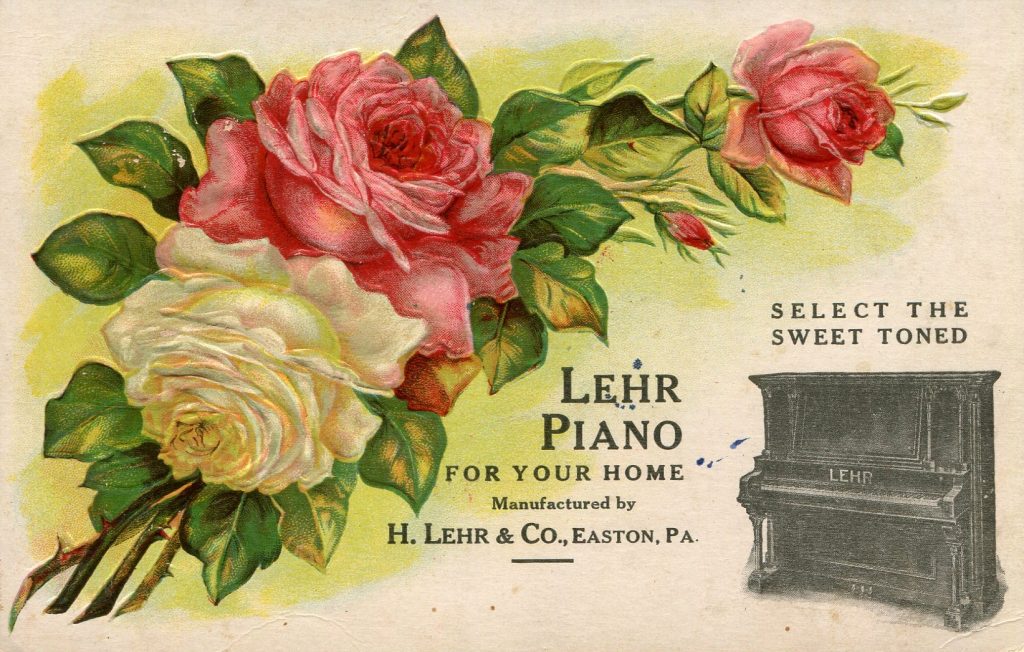 The Lehr Company was founded in 1890 by Horace Lehr in Easton, Pennsylvania. Horace was often involved in the process especially when it came to the sound tests. During the nearly forty years in business, they traded using two brand names: Lehr and Lafayette. Their Lehr pianos were often decorated with hand-carved scrolls and tilted sheet-music stands. Their up-right piano was advertised as “a piano for your home” but the spinet piano was often the choice of those making purchases for clubs, dance halls, theater stages and small entertainment venues. 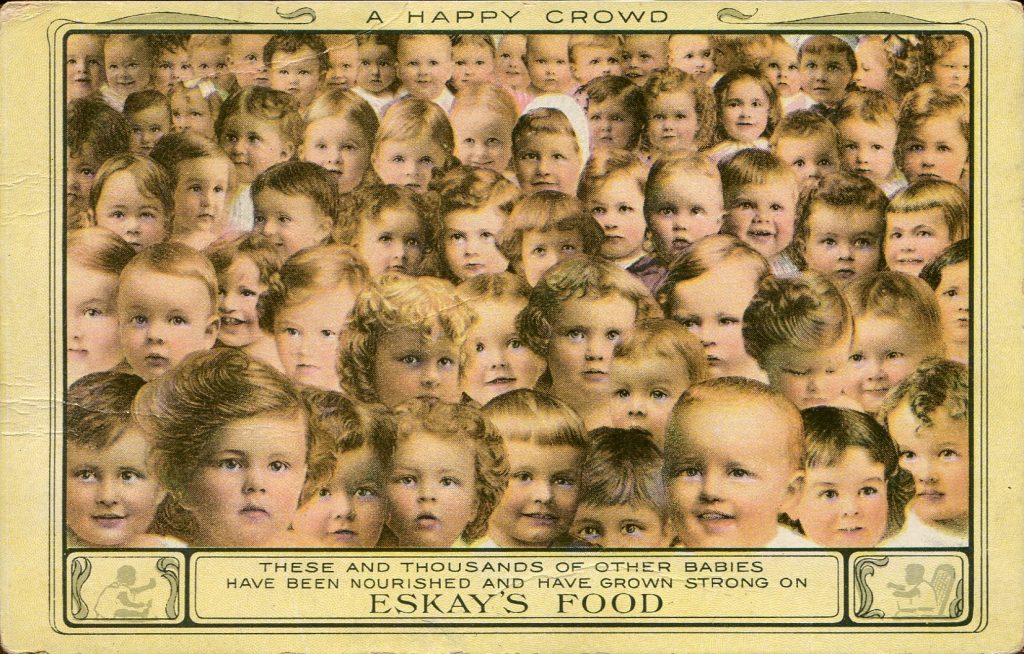 Leading up to the 1890s, it is a sad fact that thousands of infants died due to lack of proper nourishment. Simply stated, children seldom ingested enough calories for their tiny bodies to process. Many, especially in warmer months would dehydrate from what was called the “summer complaint,” which was the most common form of “diarrhea,” brought on by drinking spoiled milk.

Early in the 1890s a Philadelphia druggist named Frank Baum invented an infant food which, became known as Eskay’s Albumenized Food. Baum got it right, but in an unintended way. He thought sugar was the answer, but it turned out to be the protein found in egg whites – the Albumen.

Other foods like cereal, wheat-flour, and barley malt were similarly processed with egg whites after which sharp declines in childhood death were reported. 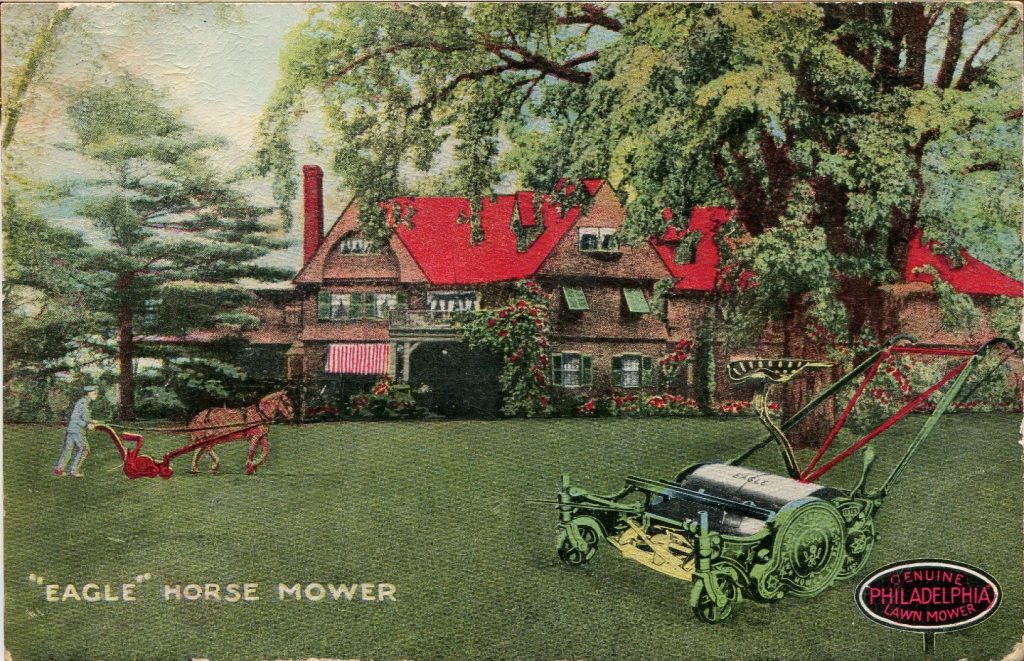 An interesting curiosity seen on this advertising card are the two horse mowers. The old style is seen near the left edge, the new version is prominent in the foreground. The “Eagle” Horse Mower was made in three sizes: the 30 inch was priced at $100, the 35 inch at $125, and 40 inch at $150. The open cylinder, five blade reel cutter would cut 14 lineal inches of turf in just one rotation. 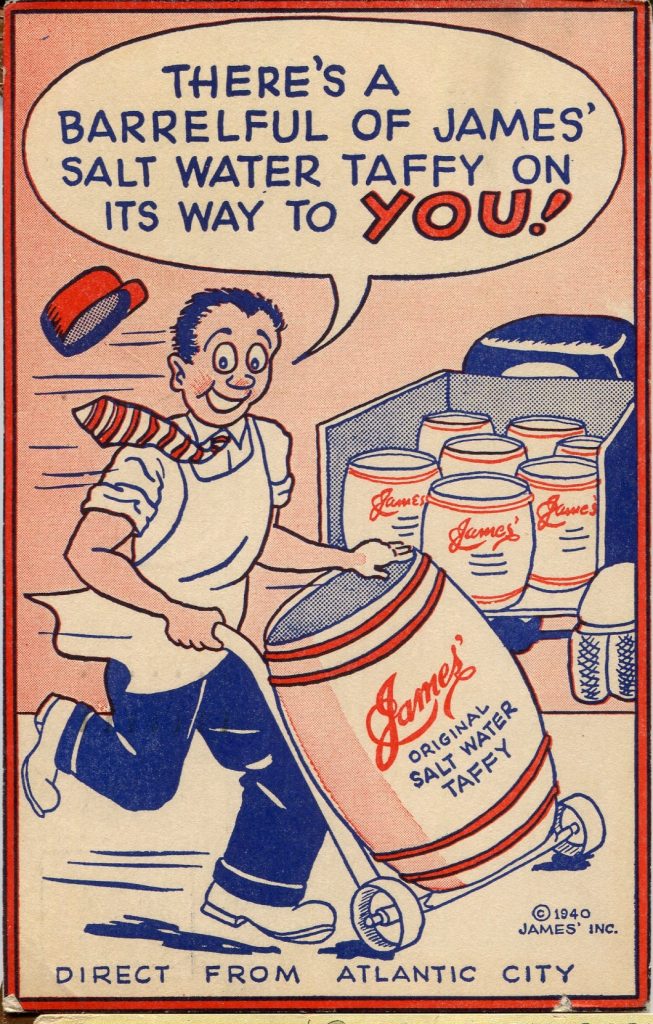 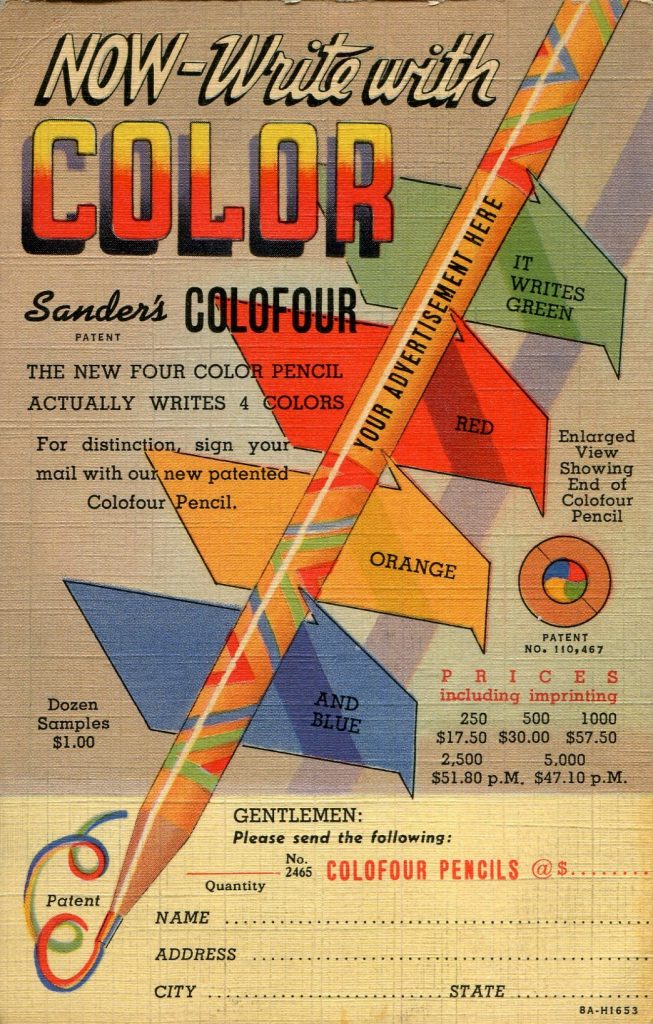 The barrelful of James’ Original Salt Water Taffy that the folk in Atlantic City would send to your friends on your behalf was not so big that the mailman needed a handtruck, but your neighbors and friends never forgot your generosity. This advertisement sports a 1940 copyright.

I’ve been looking for a Sander’s Colofour pencil for years, but never found one. Imagine the fun you would have signing your important papers with a pencil that wrote in four colors. Supposedly the Consolidated Publishers Company in Buffalo, New York was an advertising agency. This postcard actually advertises a place for their customers to advertise.

I should repeat that these cards are only “one-of” because I have never found others. If you readers know of different ones, please share.

Edith Romaine has collected postcards from hotels and restaurants since 1995. She sorts her hotel cards into three categories: Haunted, Non-haunted, and Not Sure. The “haunted” hotel cards outnumber the others 2 to 1. Edith lives on the shore of a Minnesota lake.
PrevPreviousGreetings from … the State Capitals
NextHorns and AntlersNext
3 Comments
Oldest
Newest Most Voted
Inline Feedbacks
View all comments
Bob Kozak

Interesting selection of cards. Wish I could find a pasta dish for a couple of bucks at a decent restaurant today!

Excellent cards and such an interesting story !