Fire was a common tragedy in the growing cities of the Southwest.  Phoenix, Arizona had several major fires during its territorial era:

The August weather in Arizona didn’t need wood stoves for heat, so given the time the fires started, overturned kerosene lamps might be likely causes of these fires.

As Phoenix grew several hotels were built. The Adams Hotel being the finest. Built at a cost of $200,000 in 1886, the four-story brick and wood building was the tallest in the city. It had about 8,000 square feet per floor and offered meeting areas for the Commercial Club and could accommodate over 200 visitors in its guest rooms. The hotel had eleven to thirteen foot wide, wrap around verandas on each floor, and a tall octagonal belvedere topped with a flagpole that was its signature design element. The Adams was the premier hotel in the region, and after Phoenix became the capital of the territory in 1889, it housed scores of businessmen and notables visiting the city.

The Adams Hotel fire started in the basement early in the morning of May 17, 1910, likely in a storage area for the hotel pharmacy. It spread quickly up the elevator shaft into the lobby, then down the corridors and up into the rest of the building. Like previous blazes, the cause was never identified.

Though Phoenix had grown, it had not invested in the infrastructure and human resources needed to fight huge, multi-story fires in large wood buildings like the Adams.  Phoenix still used a volunteer fire department.

The volunteer firefighters had access to a double action pumper with groups of men providing power and water pressure by pumping from either side. It was named the “Yarnell Pump” after its private owner, Harry Yarnell. The primary use of Mr. Yarnell’s pump was to water down the dirt streets. With men pumping on both sides, it still had a maximum range of about 50 feet. The pumper was normally stored on south First Street within a few blocks of the hotel.

The water supply needed when fighting residential fires came primarily from private wells and frequently from ditches adjacent to the streets, but the supply was often insufficient. Volunteer firefighters often had to rely on a “bucket brigade.”

On the morning of the fire volunteers arrived at the burning hotel and so did scores of locals. The spectators came to watch after hearing pistols fired as an alert and seeing smoke billowing from the building.

The fire raged out of control, and the men strained to prevent it from spreading to adjacent buildings and across the streets to other blocks.

Among the guests staying at the hotel when the fire broke out was Arizona Governor Sloan and his family. The governor had stayed up to watch Halley’s comet the night before and was asleep in his room while his wife and daughter slept on the portico. In the confusion caused by the smoke, the night clerk, Henry Willey, ran to the governor’s room and caried his daughter, Marion, to safety.  The governor and his wife escaped over the balcony railing and onto the awning above the sidewalk, then jumped into an express wagon brought to help guests escape from the hotel.

Initially it was thought that everyone had safely evacuated the building, but a later investigation confirmed that two individuals died in the fire.

Several local photographers made real photograph postcards that documented the event. Some of the images appeared in the local newspaper and were also produced as printed postcards. Robert Turnbull was probably the most entrepreneurial, offering several images of the loss of the historic hotel.

The owners quickly rebuilt at the same site. The new five story structure was of poured concrete and was said to be “Absolutely Fireproof.” The rebuilt Adams remained an important Phoenix hotel until 1973, when it too was demolished. Today a larger hotel is at the same location.

The following images are from the collection of Jeremy Rowe.
Jeremy Rowe Vintage Photography: www.vintagephoto.com. 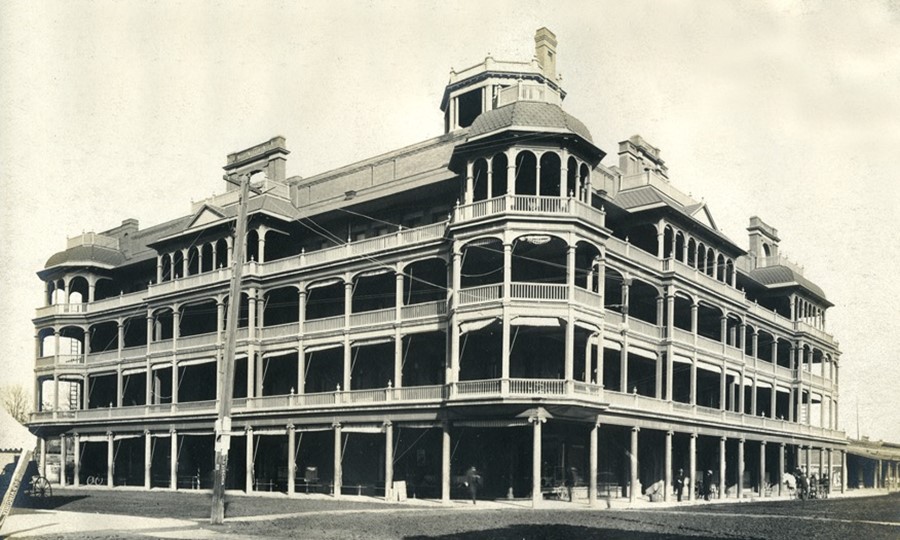 Albumen photograph of the Adams
Hotel soon after completion c. 1898 by Frank Hartwell. This image was reproduced on printed postcards.

Unusual panoramic real photograph postcard of the intersection of Center Street and Adams Streets in Phoenix with the Adams Hotel at left c. 1908 by C. Barton. 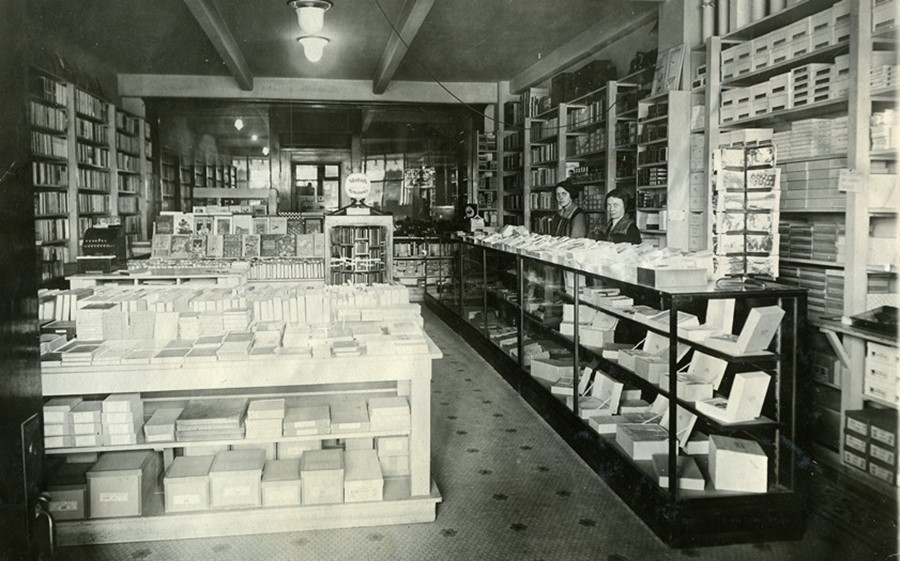 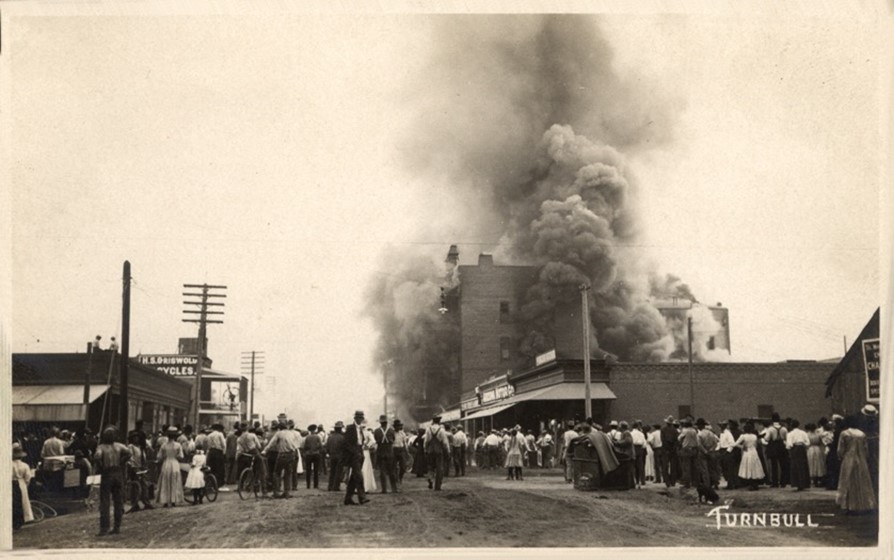 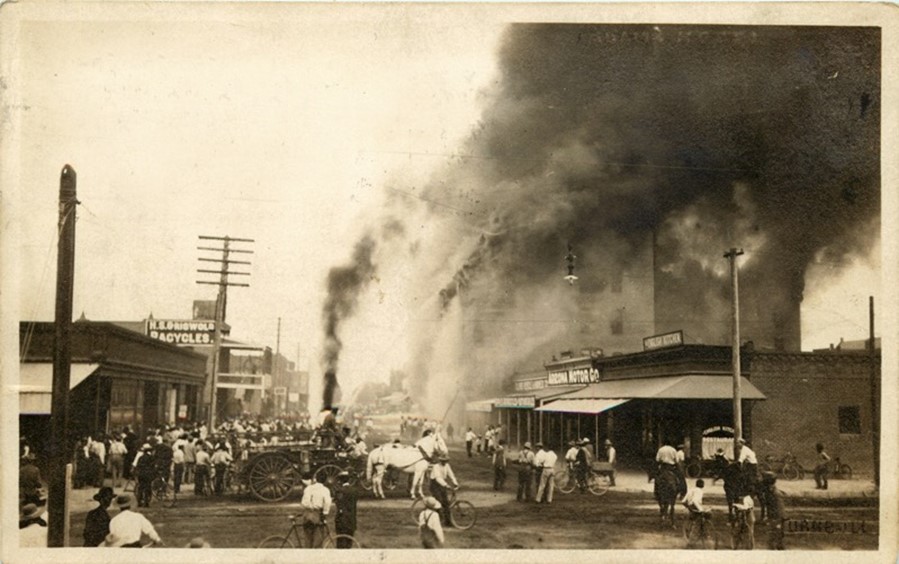 A two-image sequence as the photographer moved toward the fire
showing the crowds forming and fire progressing on the morning of May 17, 1910.
Real Photographic Postcards by Robert Turnbull. 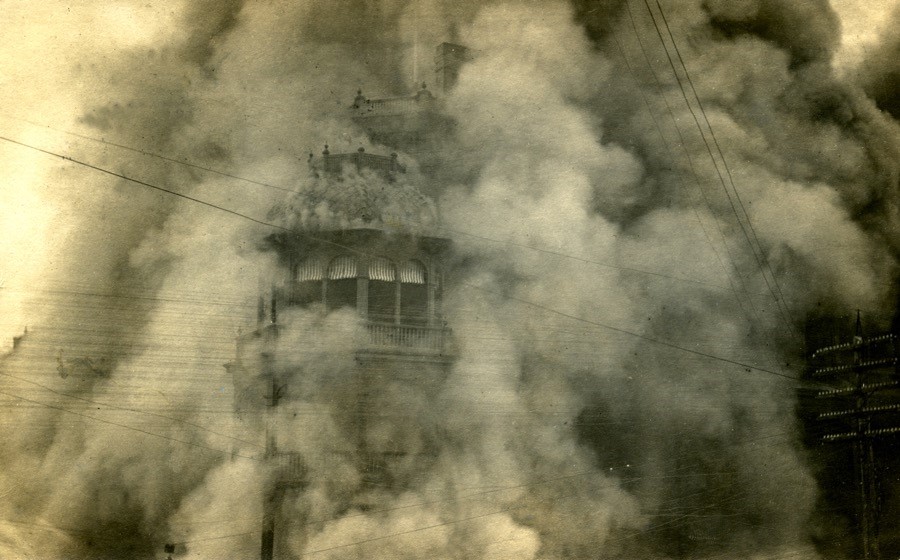 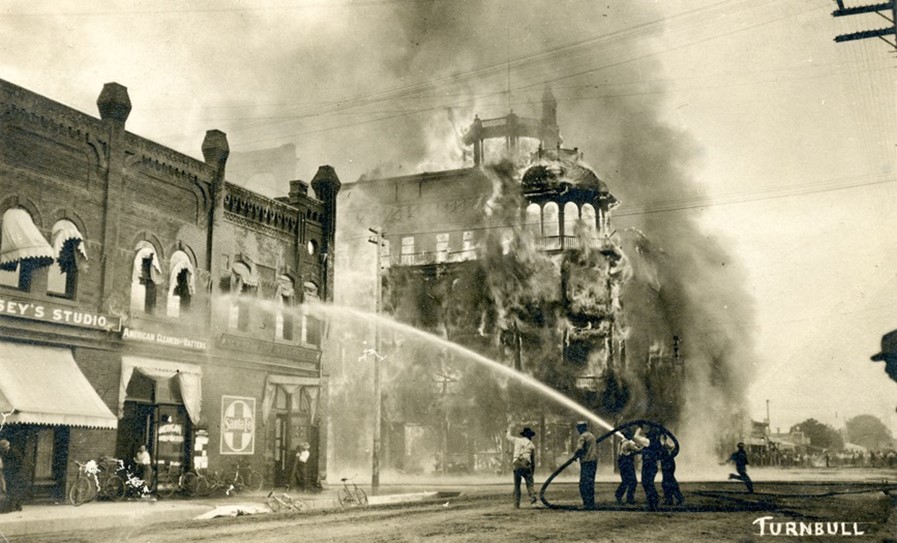 Volunteer firefighters wetting down adjacent
buildings to prevent the spread of the fire
as the hotel burns in the background.
Real Photograph Postcard by Robert Turnbull. 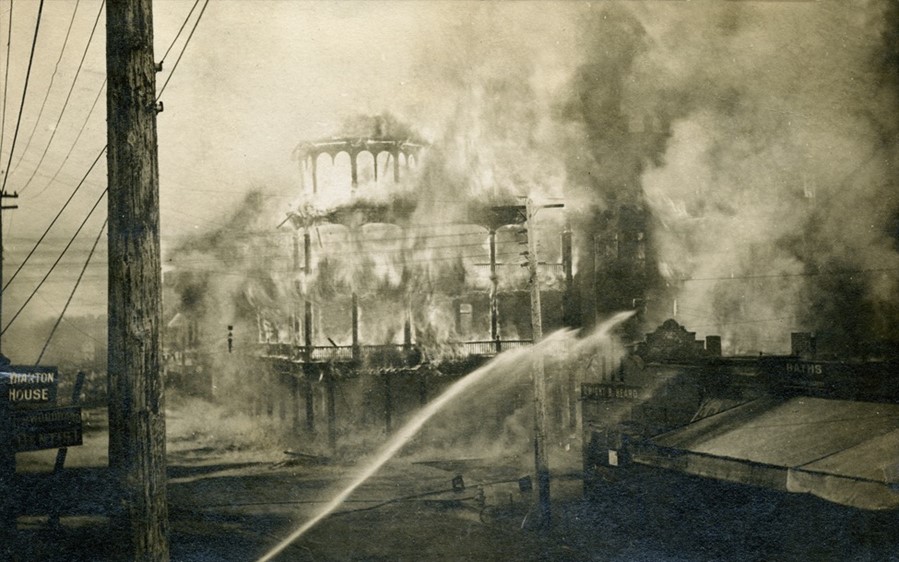 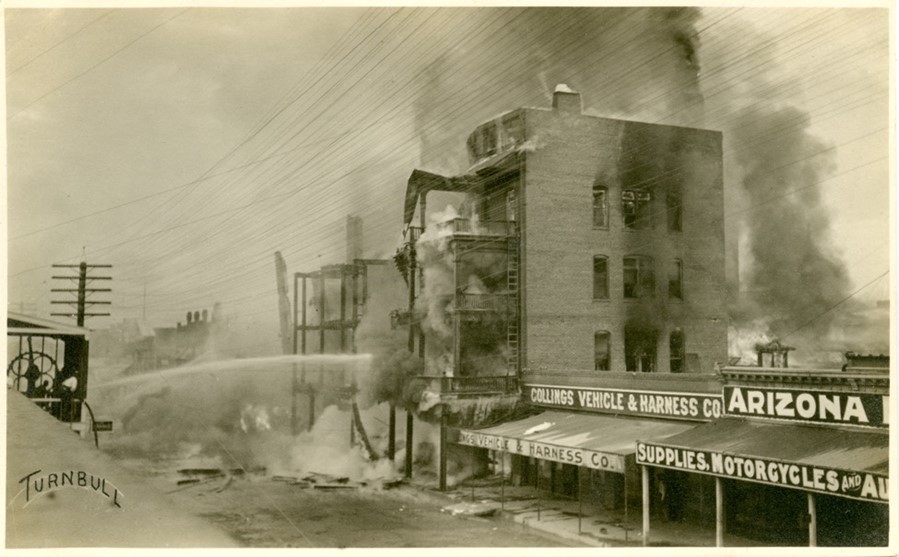 Smoldering ruins of the Adams Hotel after the fire.
Real Photograph Postcard by Robert Turnbull.

For over 40 years Jeremy Rowe has collected, researched, and written about photographic history. His collecting has focused on photographs from daguerreotypes and cased images to mounted photographs, real photo postcards, and vernacular images. His collecting interests focus on Arizona and the Southwest, Lower Manhattan, and “images that strike me.”
PrevPreviousOscoda, Michigan and Tales of Wurtsmith Air Force Base
NextThe Girl I Left BehindNext
5 Comments
Oldest
Newest Most Voted
Inline Feedbacks
View all comments
Terry Boyce

Excellent images and a superb report!

With 17 different printed cards and no representatives being b/w, the true view offered by rppc detail finer aspects of the Adams conflagration. Depth of narrative offers information previously unknown. Thank you for this article.

Events like this led to the “Fireproof Hotel” designation you see on a lot of early postcards! Office furniture went from wood to metal to reduce flammable materials in office buildings. An early adaptor is still called “Steelcase” to this day!

I’d like to go back in time just to visit the bookstore that was located on the ground floor of the Adams Hotel. Obviously plenty of reading material was available for the travelers in those days before computers, TV, and even commercial radio!