A very well-crafted website is maintained by the office of the artisans, historians, and craftspeople who preserve and maintain the landmark buildings, monuments, art, and grounds of the United States Capitol campus. The site is a virtual treasure trove of information about government buildings, grounds, and historical art and monuments.

The AOC (Architect of the Capitol) website’s address is https://www.aoc.gov. The office is responsible for much more, however for now we will concentrate on the holding, preservation, display, and history of just eight historical paintings found in the Rotunda of the Capitol.

Over the course of four decades in the early- to mid-19th century (1817-1855) the Congress announced and enacted a series of competitions among artists to fill the eight niches in the rotunda of the capitol building.

At the end of the first competition John Trumbull (1756 – 1843) of Connecticut was awarded the privilege of installing four of his paintings in the capitol rotunda. Each painting was to illustrate an early event in the country’s revolutionary era.

Not quite a century later, B. S. Reynolds, a leading Washington postcard publisher created a set of white-border postcards featuring the gardens and structures on the capitol campus; eight of those postcards were devoted to the rotunda murals.

The first of Trumbull’s paintings, Declaration of Independence, arrived in 1817. 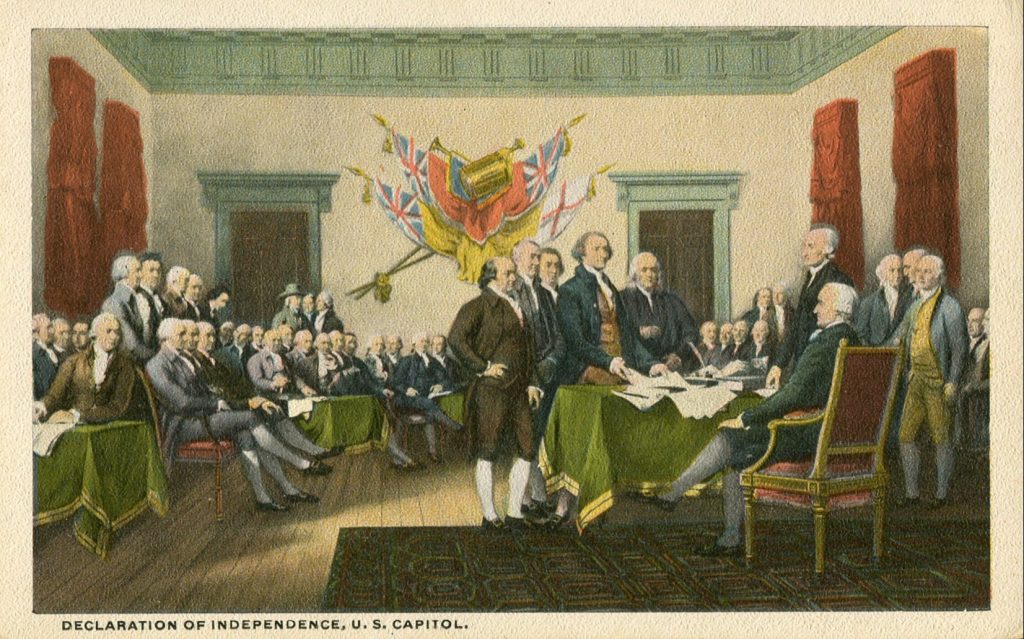 In the painting John Hancock, President of the Congress is seated at the table and in front of him stand the Committee of Five – Thomas Jefferson, John Adams, Benjamin Franklin, Roger Sherman, and Robert L. Livingston.

The second of Trumbull’s paintings, the Surrender of General Burgoyne was installed in 1822. 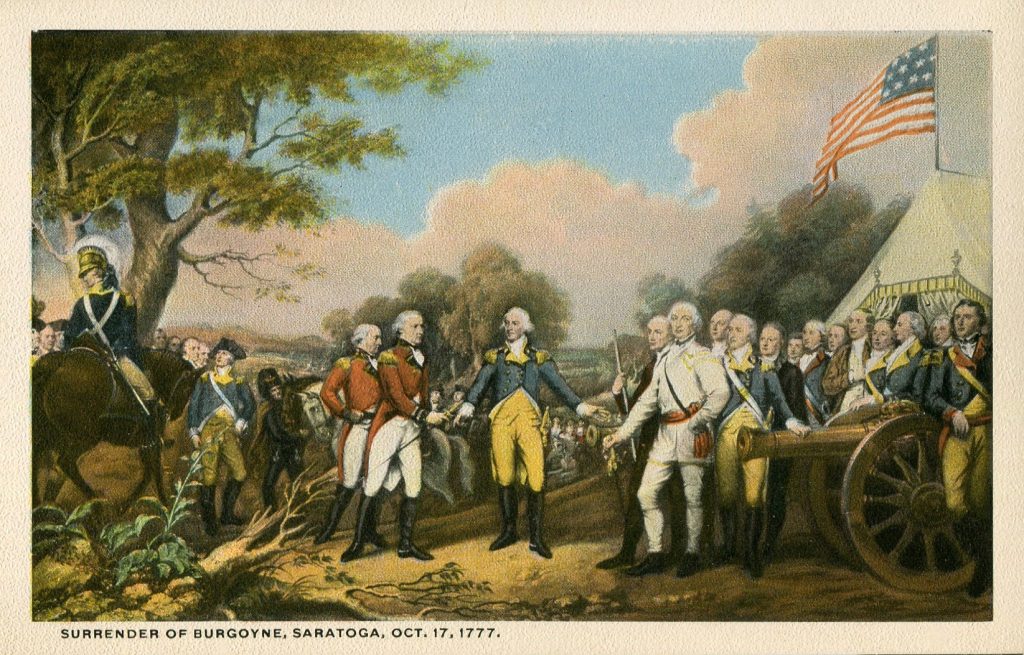 The surrender of British General John Burgoyne took place in Saratoga, New York, on October 17, 1777. The painting depicts the moment when Burgoyne offers his sword to the American General Horatio Gates. Gates declined to receive the sword.

The third of Trumbull’s paintings, Surrender of Lord Cornwallis was installed in 1826. 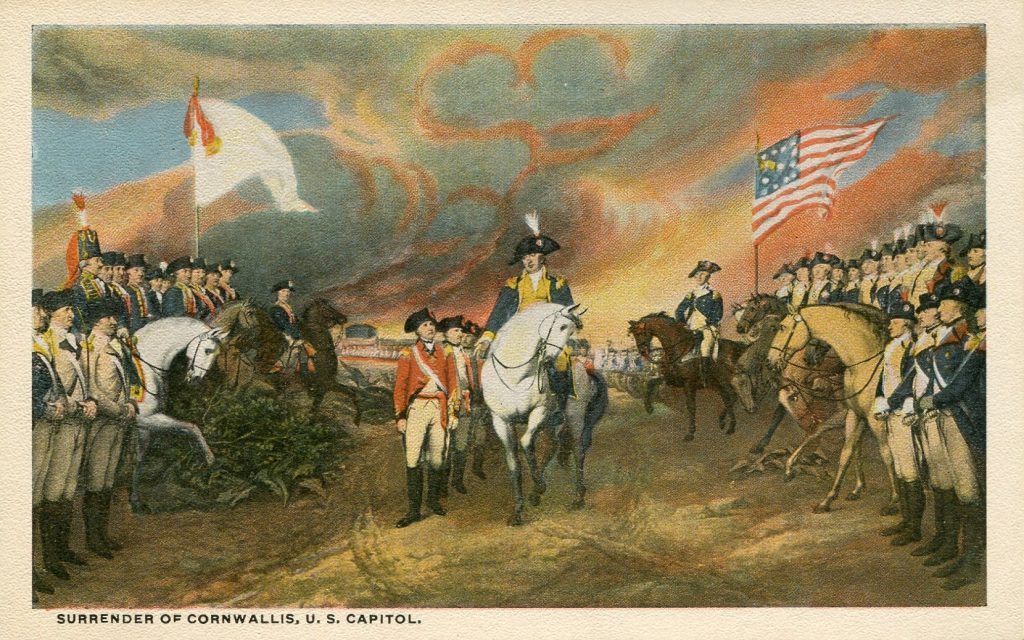 Trumbull chose to illustrate the moment when in 1781, the British led by Lord Cornwallis arrived in Yorktown and met overwhelming odds. In an absolute stroke of genius and gamesmanship, General Washington (riding the brown horse, just right of center, stood back from the ceremony because Lord Cornwallis chose not to attend.

The last of John Trumbull’s painting, General George Washington Resigning His Commission, arrived in Washington and was installed in the rotunda in 1826. 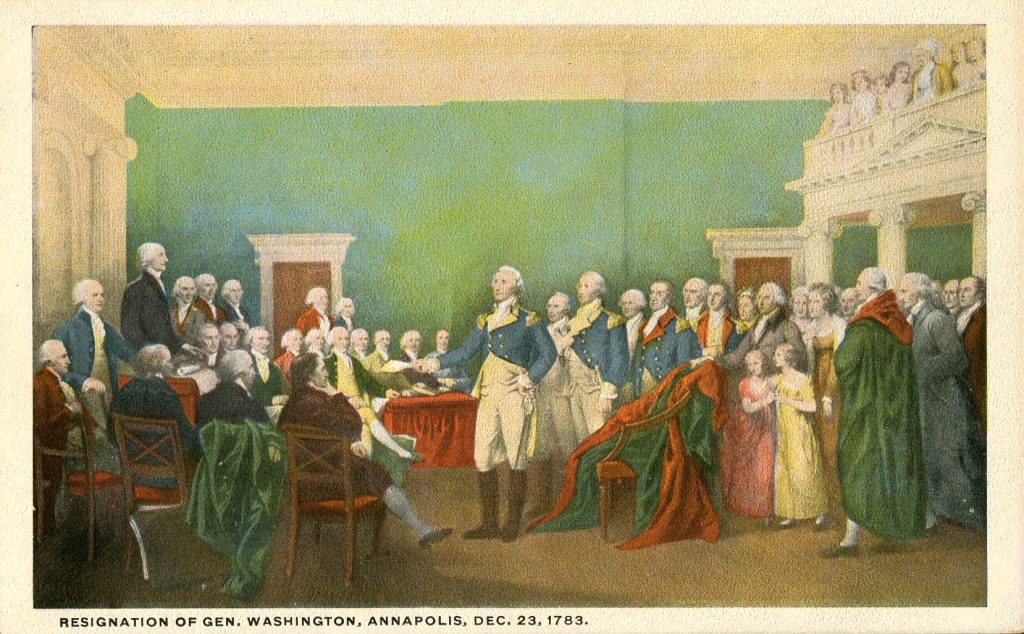 Trumbull’s choice to paint the ceremony in which Washington resigned his commission may be the most historical painting in the rotunda. It illustrated a congressional meeting on December 23, 1783, when the commander in chief of the Continental Army, George Washington, addressed the Continental Congress in Annapolis in order to resign his military commission. His resignation signified the end of Washington’s six-year tenure as de facto head of the United States of America. Since then, Americans have viewed this event as a tribute to his fellow citizens and his republican (small “r”) values. 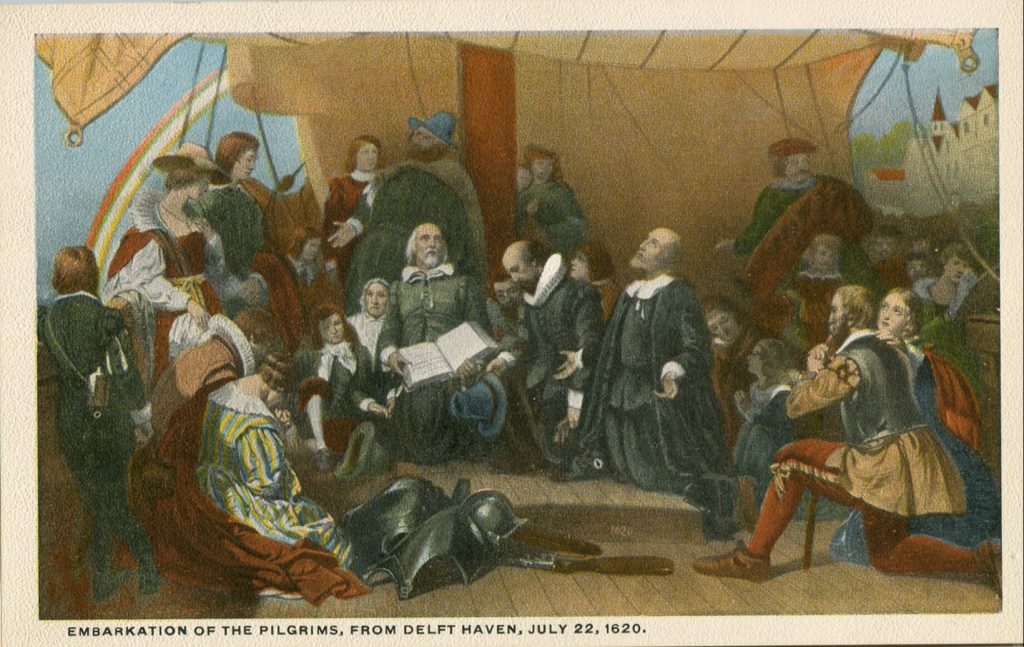 Weir’s painting turns time back to before the Revolution. Many of what came to be American ethical practices started in England by a religious group who called themselves the “Brownists.” They suffered irreconcilable differences with the Church of England, so the group left England in 1608 and eventually chose to make their way to America. Their arrival has since become the celebrated date – July 22, 1620. 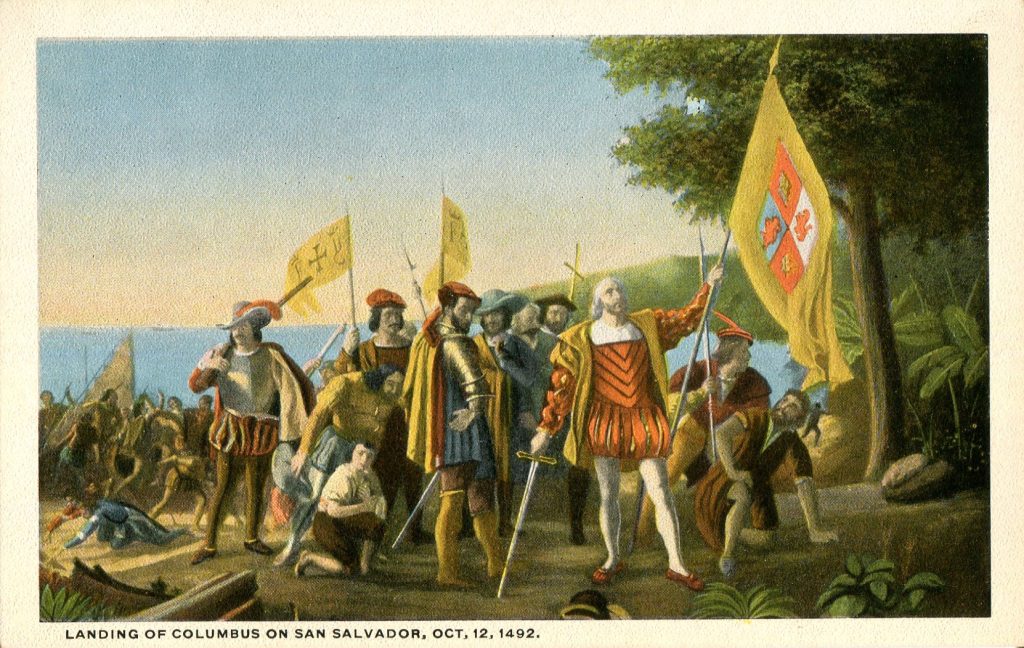 Most school children are taught about the first landing of Columbus in the new world, but there were others. In the twelve-year period from 1492 to 1504, Columbus made four trips from Spain to the Americas. In 1492 he was 41 years old, yet Vanderlyn chose to paint him as a much older man. 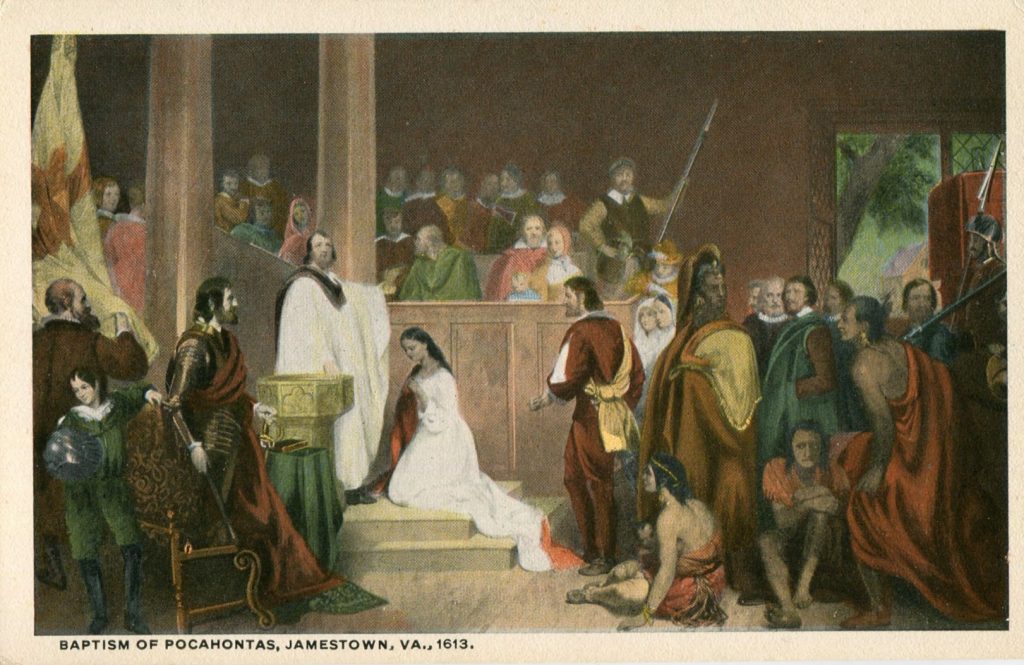 A wonderful Jeopardy Answer would be, “The name used by the Anglican priest Alexander Whitaker to baptize Pocahontas in 1613. The Question would be, “What is Rebecca?” This seldom remembered bit of historical trivia won’t make you any money, but it’s nice to know.

William Henry Powell (1823 – 1879) won the last competition for a rotunda mural in 1847. His choice of topic was well received and the Discovery of the Mississippi by De Soto, was installed in the rotunda in 1855. 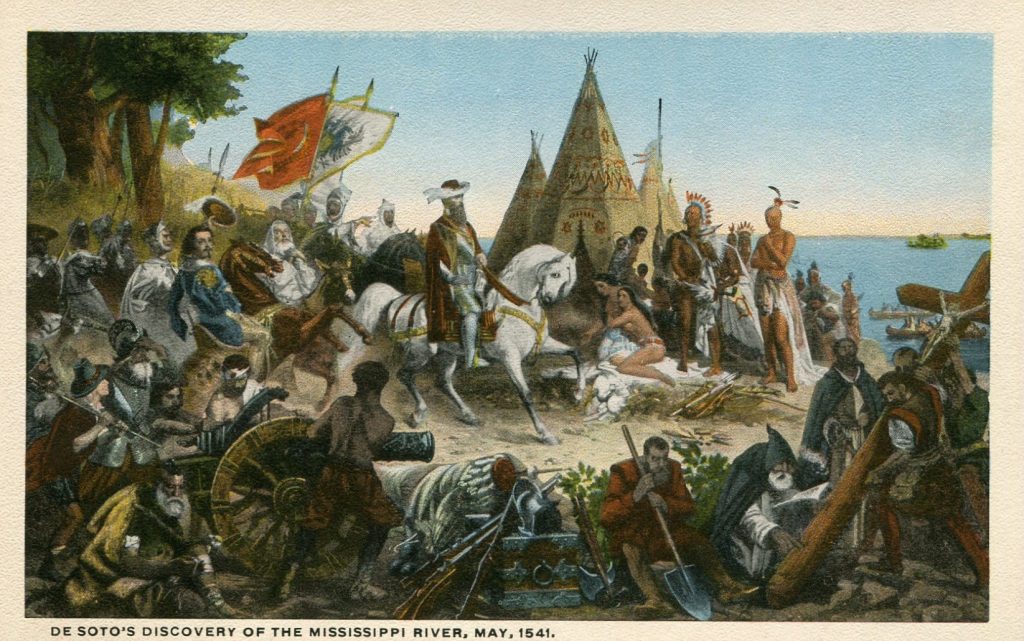 Powell like his three predecessors returned to the era of North American exploration when he chose Hernando DeSoto’s venture into the Mississippi River valley in May 1541. The painting depicts the aftermath of a battle between DeSoto’s forces and the Choctaw tribe led by their chief Tuskaloosa.

B. S. Reynolds Company of Washington, D.C., published their first postcards in 1901. The corporate headquarters was at 1202 D. Street, NW. Their cards were sold well into the 1950s, but operations ceased in 1948.

Burnet Scott Reynolds was the middle child (born March 10, 1858) of seven children born to the Reverend Charles Reynold and Lucy his wife of East Hartford, Connecticut, and later of St. Augustine, Florida. In his early years Reynolds associated himself with the Foster Printing company in Washington, DC. (The International Trade Center and the International Protection Agency now share the site.) Mr. Reynold died in Hartford, Connecticut on November 9, 1944.

Ray Hahn is a retired educator, but he has never stopped teaching. His decades of researching, writing and editing a newsletter for the South Jersey Postcard Club has been a world-class education in trivia. In addition to postcard collecting, Ray’s other interests include history, genealogy, and touring the world with his wife Marie. Ray often advises his readers to "Join me as we explore the world one postcard at a time." Ray and Marie live in New Jersey.
PrevPreviousThe Town Musicians of Bremen
NextRoscoe Arbuckle and a Kodak CameraNext
2 Comments
Oldest
Newest Most Voted
Inline Feedbacks
View all comments
Dan Perkins

Love these bits of Postcard history

What a great American History postcard set. Thank you for the info!