Roscoe Arbuckle
and a Kodak Camera

These real photo postcards were probably taken with a Kodak Autographic 3A camera. They show silent film star Roscoe Arbuckle entertaining American troops at times between 1915 to 1917. Later known as “Fatty Arbuckle,” Roscoe began his career in 1909 at the Orpheum Theater in Bisbee, Arizona, as a vaudeville performer. He was half of the musical and slapstick comedy team Reed & Arbuckle. Roscoe and his wife Minta Durfee left Bisbee later that year to take advantage of the larger entertainment industry in Los Angeles. Though a talented singer, Roscoe chose to remain a vaudevillian even after Enrico Caruso encouraged him to pursue a singing career. After a few years on the circuit, Arbuckle was discovered by Max Sennett who made him part of the Keystone Cops, and by 1913 Arbuckle had successfully become part of the fast-growing film industry. 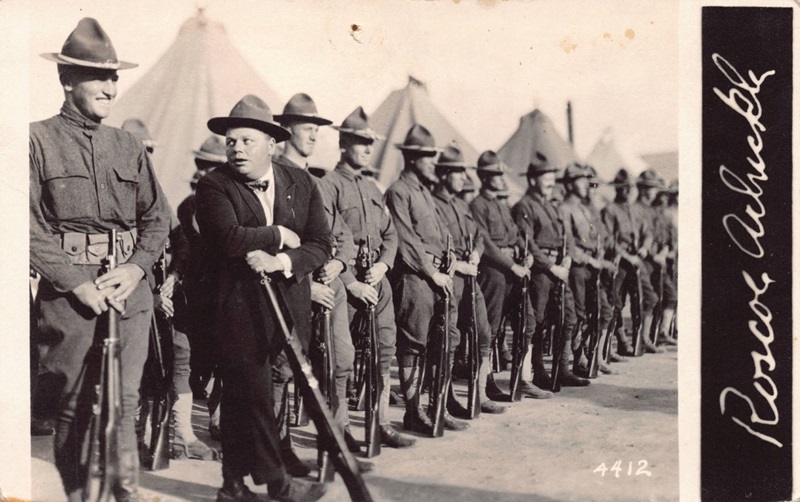 These cards of Roscoe entertaining military troops were collected from different sources over several years and each raises an interesting question. Since the troops with Arbuckle have yet to be identified are they stationed at the Mexican border (perhaps early in Arbuckle’s career) or are they soon to be involved in World War One?

Each image is numbered in the lower right corner, but the significance of the number is uncertain. The card above shows Arbuckle goofing off and mugging to crack-up a soldier in formation. The card below shows an apron clad Roscoe washing cups with a group of soldiers. 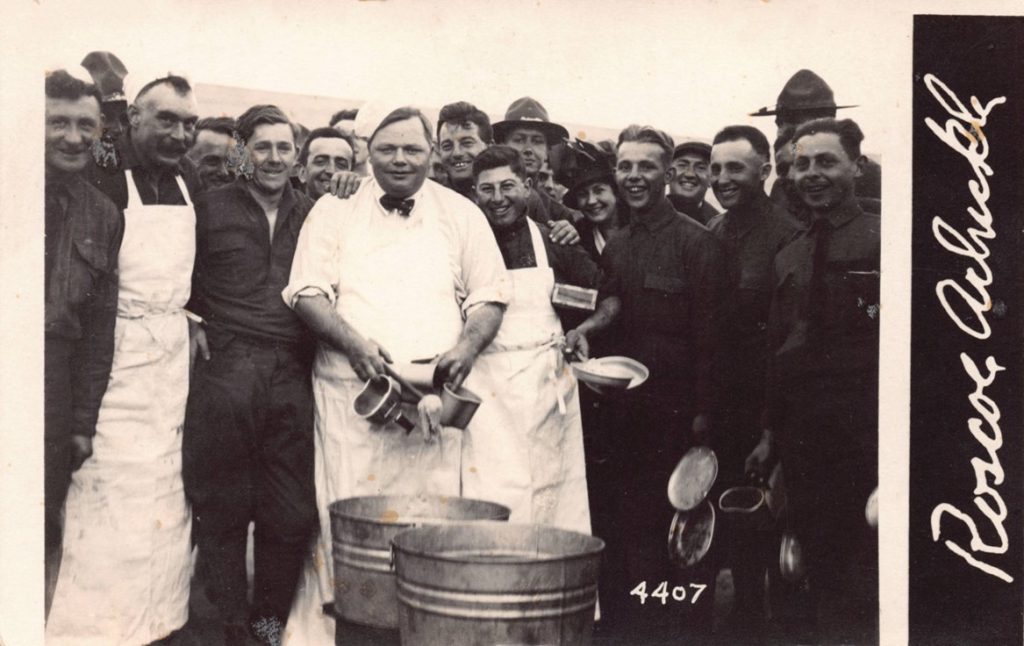 And a third card shows Arbuckle in a similar pose as card number one but with a different group of soldiers. 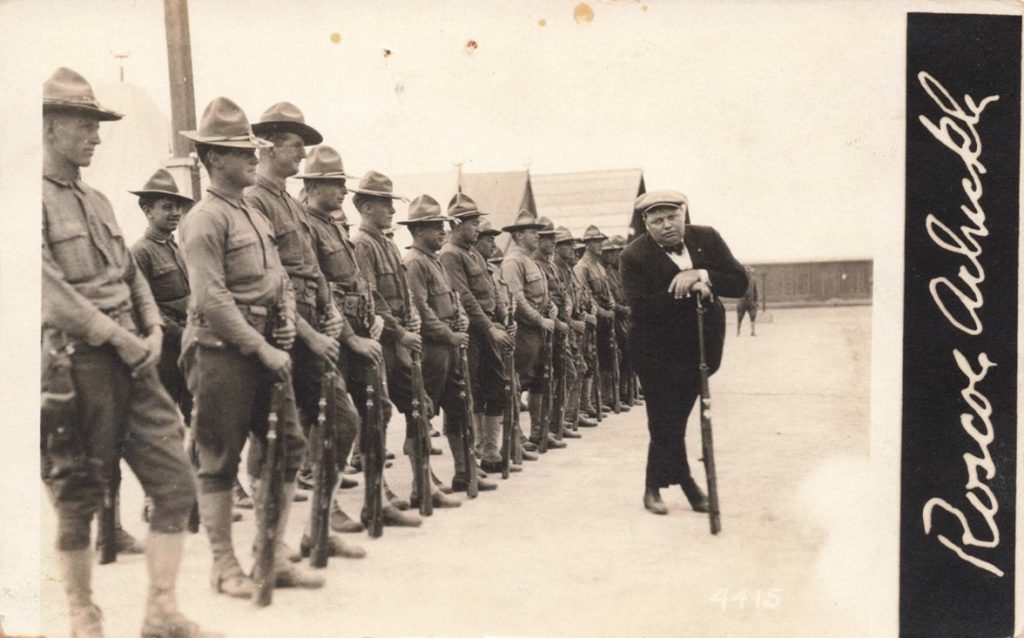 The location of the pictures is unknown, but each one has Arbuckle’s signature on the right edge in what appears to be an example of an Autographic Camera’s notation feature, however each signature is similar and could have been printed from a single negative to imitate the Autographic style.

Hopefully when more examples of this Roscoe Arbuckle real photo postcards series are found, additional information will surface to complete this story. 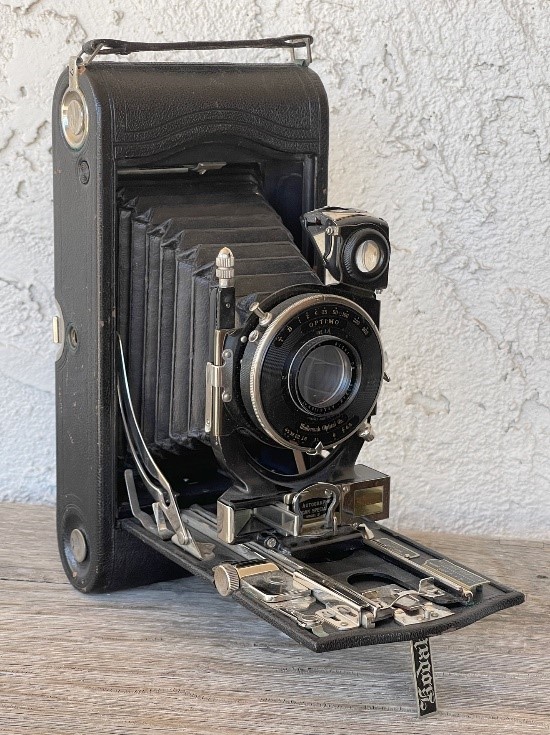 However, the story of the Kodak Autographic Special 3A Camera is complex. Some interesting factors figure into the popularity of the real photo postcard images taken in the first decades of the 20th century:

As the market grew and the process of making photographs and postcards became familiar, manufacturers offered new formats, such as panoramic cameras, and more elaborate cameras with better lenses and accessories that could compete with professional offerings.

In 1914, Kodak introduced a line of “Autographic” cameras. The Special 3A camera, with a coupled rangefinder made six 3¼” X 5½” postcard size negatives on No. 122 roll film. An added feature was the capability to make a notation on the negative that would appear on the edge of the photograph or postcard printed from that negative.

The Autographic camera had a small trap door on the back with a bracket for a removable decorated metal stylus. When the door was opened the photographer could make a note on the paper backing of the film that was transferred to the film through a thin layer of carbon paper. The carbon paper transferred the writing to the film and prevented exposure of the printed lines.

When the film was developed and printed, the result was white writing on a black background on the edge of the image. Unlike most handwritten notations made with India ink on the negative which often include awkward or reversed letters, the Autographic produced correctly oriented notations.

For over 40 years Jeremy Rowe has collected, researched, and written about photographic history. His collecting has focused on photographs from daguerreotypes and cased images to mounted photographs, real photo postcards, and vernacular images. His collecting interests focus on Arizona and the Southwest, Lower Manhattan, and “images that strike me.”
PrevPreviousThe Eight Capitol Murals
Next1967: A Summer of LoveNext
2 Comments
Oldest
Newest Most Voted
Inline Feedbacks
View all comments
John

Thank for the information on the Kodak camera.

Long before O.J. Simpson became ensnared in ‘the trial of the century”, Arbuckle gained notoriety for a scandal involving the death of actress Virginia Rappe.